Mindjammer: Grovel Before the Children of Orion 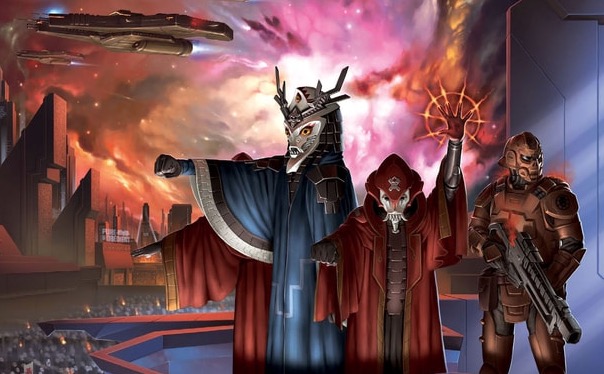 Mindjammer’s xenophobic villains, the Venu, shall unite the cosmos under their god-emperor, even if the cosmos must burn.

Mindjammer is the operatic sci-if roleplaying game bright to you by Modiphius. If you’ve never played it, it capitalizes on the Fate Core system, bringing an expansive sci-if universe to your tabletop. There’s a lot of lore to unearth, and you’ll have the chance to do just that with the latest sourcebook–it explores the villains of the setting, giving players a chance to play as rebels, conspirators, double agents and more.

The Venu have a very Brunnen-G-from-Lexx-esque vibe. With their Dark Radiance subbing in for His Divine Shadow, which is pretty cool, you don’t often get to look that close at tyrannical god-emperors, so, definitely worth checking out.

“To dwell on the past is weakness! We were born from nucleonic fire. We were forged in flame and suffering. And now we march to the stars and make the spawn of abomination burn!”

Welcome to the Bright Empire of Venu—the interstellar civilisation of the “bad guys” of Human Space! An ancient people of xenophobic human supremacists, survivors of an ancient war, now hellbent on cleansing the cosmos of abomination and bringing the purifying word of their undying God-Emperor to the stars.

Children of Orion—the Venu Sourcebook provides a whole new universe of adventure for your Mindjammer games—a harsh and violent interstellar empire beyond the Commonality frontier. Play rebels against the domineering rule of the God-Emperor, mutated troopers and servitors of the sinister Dark Radiance fighting against the cultural inroads of the Commonality—or Commonality agents themselves, working behind enemy lines to defeat an implacable foe which once devastated the Core Worlds! It’s a completely different vibe for your Mindjammer games—darker, more desperate, where the survival of an entire people is at stake.

Children of Orion—the Venu Sourcebook is now available in PDF format on Modiphius.net and DriveThruRPG, with the print edition available from the 23rd November.

We hope you enjoy this exciting new Mindjammer sourcebook, which joins other Mindjammer supplements like BLUE, The Far Havens, Dominion, The City People, and Hearts and Minds, in this ever-growing setting of mind-blowing transhuman science-fiction adventure