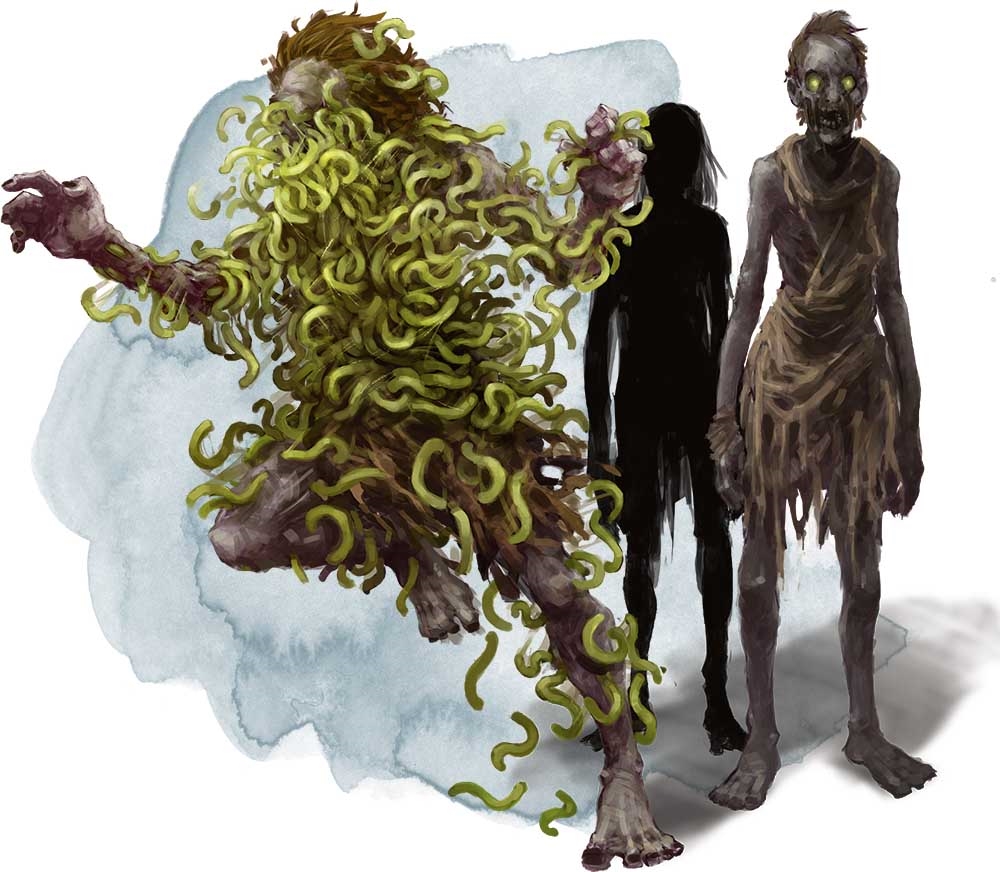 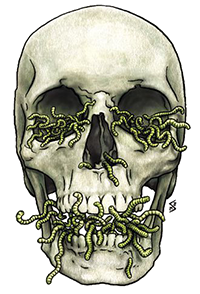 Sometimes you get the worm, sometimes the worm gets you.

There used to be a graying tower alone on the sea. It became the light on the dark side of me–that’s right, it’s time to fire up your early 2000’s collector’s special edition DVD of Batman Forever and  try to silence the nagging doubt at the back of your mind that this is the one with the bat-nipples, because that was just Batman & Robin, but this is the one with the Riddler, which was the villain Jim Carrey was born to play, and this movie was kinda responsible for the resurgence of Batman as a movie franchise, it made more than either of the Tim Burton ones, so this one has to be saf–OH DEAR LORD WHAT’S THAT 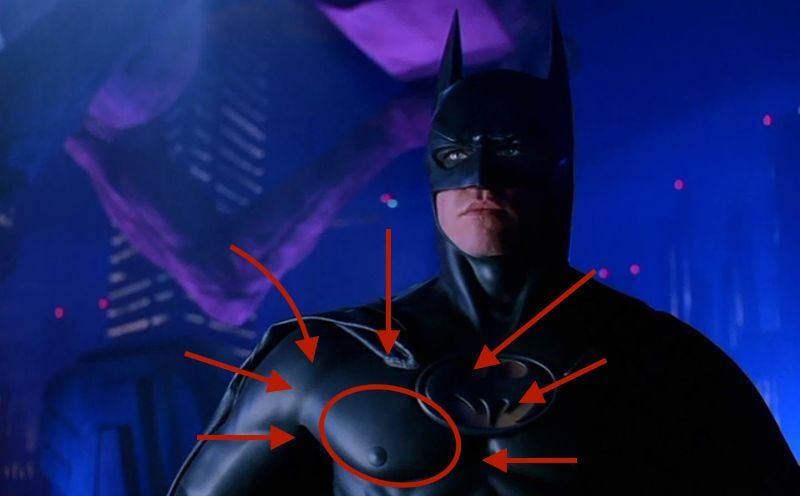 –well aside from a reminder that no Batman movie is safe, it also highlights that this week on the monster spotlight, we’ve all got a Kyuss from a Rose.

That’s right, we’ve got the original plague-ridden undead horror. Well okay not the original, that’s probably I Am Legend–at least the earliest “modern” example of it. There could be older examples of a plague-like spreading of undeath, but for now let’s go with that. And the Spawn of Kyuss, or Son of Kyuss as it was originally called back in the Fiend Folio days, is definitely inspired by the idea of spreading evil. Originally created by the evil high priest Kyuss (who would later go on to be more about Worms than the latter Dune books) created these creatures with a dark ritual taught to him by an evil deity.

And from there, they spread through the lands of the living. Putrescent corpses, crawling with fat green worms, the Sons of Kyuss would infect victims with a deadly disease, and if that wasn’t enough, the worms–sort of the signature feature of this monster–could leap onto the living and tunnel towards their brain, transforming a still living victim into another Son of Kyuss in moments. This is the core of their identity as a monster. From this simple concept a whole mythology would later spring up. But for now let’s take a look at the early Son of Kyuss. 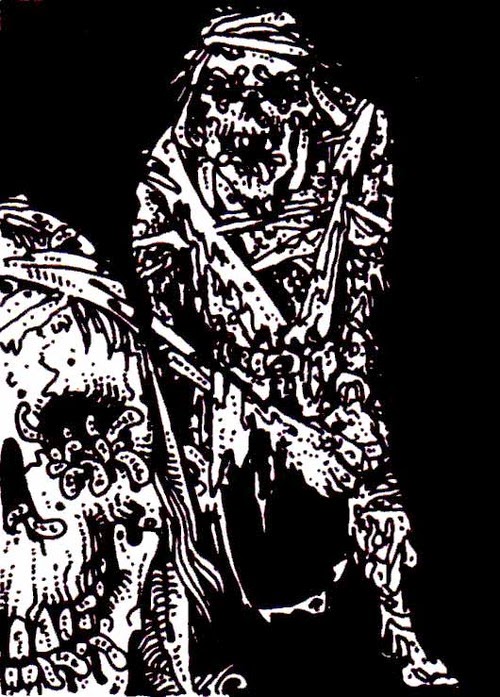 Here we go. The original Son of Kyuss. One of the most terrifying monsters a party can come across. Especially if you were running around with hirelings–these guys were at their deadliest when fighting multiple enemies. As mentioned, the original Sons of Kyuss were created by Kyuss “an evil high priest” and they had some terrifying abilities that signaled to a party that they were facing more than a normal undead creature. These putrid corpses were riddled with worms and had powerful defenses. At first glance, they’re not too much of a threat. They have 4 hit dice and deal 1d8 with their lone attack. And sure they come standard with a regeneration that, in 1st Edition, was an incredibly powerful thing. They’d regenerate 2 hit points per round, and would even regenerate severed limbs–the only way to kill one of these was with fire, lightning, acid, or holy water being “applied” to their wounds.

But they also had a 25% chance per hit of inflicting fatal leprosy on a target. Afflicted creatures had 1-6 months to live, and each month it progressed was a permanent loss of 2 points of Charisma. While infected, characters only heal at 10% of the normal rate, and any cure wound spells were immediately negated. So a Son of Kyuss might kill the party long after they vanquished it. Although the real threat is in the worms that infest their corpses.

Each melee round, a single worm could leap towards an adjacent character, making a normal to hit roll–but if it hit, it would take a round to burrow into the skin (during which time it could be destroyed by the touch of cold steel, holy water, or a blessed object, so if you weren’t prepared you’d be hosed. Once the worm burrowed inside, it headed straight for the victim’s brain, reaching it after 1d4 rounds. Once inside a character, only remove curse or curse disease could help a forlorn victim (though neutralize poison and dispel evil do buy you a few actual turns with which to solve the problem). If a worm reached a victim’s brain, they immediately transform into another Son of Kyuss, instantly dead and putrefying. Top that off with a thirty-foot aura of fear that would send characters running and being as hard to turn as mummies, and you have a surprisingly powerful monster packed into 4 hit dice. 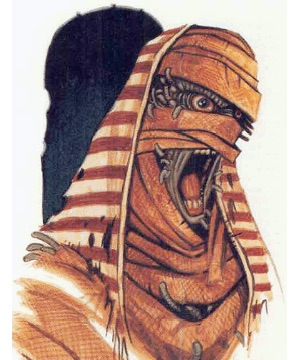 The 2nd Edition Son of Kyuss was much the same as its predecessor. Again they had the same suite of regeneration, fear, and disease and worms that their 1st edition counterparts had in spades. Though by this time, the lore on Sons of Kyuss and the K-man himself had been expanded thanks to supplements like Rary the Traitor which included encounters with Sons of Kyuss in the Necropolis of Unaagh–and in The Scarlet Brotherhood, Kyuss himself is identified as an evil demigod. At any rate, they have a much more mummy-like appearance, though their wrappings could also be suggestive of those who were afflicted by the leprosy and turned in the midst of it. 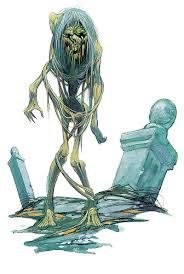 3rd Edition heralds the dawn of the Spawn. Appearing in the Monster Manual II, they took on a much more gaunt, skeletal, yet somehow still “juicy” appearance. These rotting zombie-like undead were still shot through with green, writhing worms–though their rules got a 3rd Edition overhaul. They gained fast healing 5 instead of regeneration, which wouldn’t let them recover from almost total destruction, but it did mean that they couldn’t have their healing shut down by fire, lightning, or acid damage.

Presumably as a result of clever players trying this out throughout two previous editions. Spawns of Kyuss gained a curious vulnerability to Remove Curse or Remove Disease. Casting it upon them meant they’d be transformed immediately into a normal zombie. The fear aura and disease are still present, though the diesase is toned down–with creatures no longer instantly gaining a 1-6 month death sentence–instead dealing 1d6 points of Constitution damage and 1d4 points of Wisdom damage.

The worm also turned in 3.x edition. Spawns of Kyuss gained the ability to make a melee or ranged touch attack (with a +6 or +1 bonus, depending), which resulted in a worm (fine vermin, AC 10  and 1hp) onto a creature. If the worm wasn’t killed by the Spawn’s next round, it burrowed into the flesh of its host (unless the host has a natural armor bonus of +5 or more), and then over the next 1d4+1 rounds burrows towards the brain. As before, remove curse or remove disease would destroy it, or a Heal Check (DC 20) could also extract the worm mid-squirm). Once it reached the brain, death wasn’t immediate (instead it dealt 1d2 points of Intelligence damage per round) until either it or its host died. If the latter occurred, the creature would rise as a new Spawn of Kyuss 1d6+4 rounds later.

Still deadly, but the pace of it was spread out a little more. 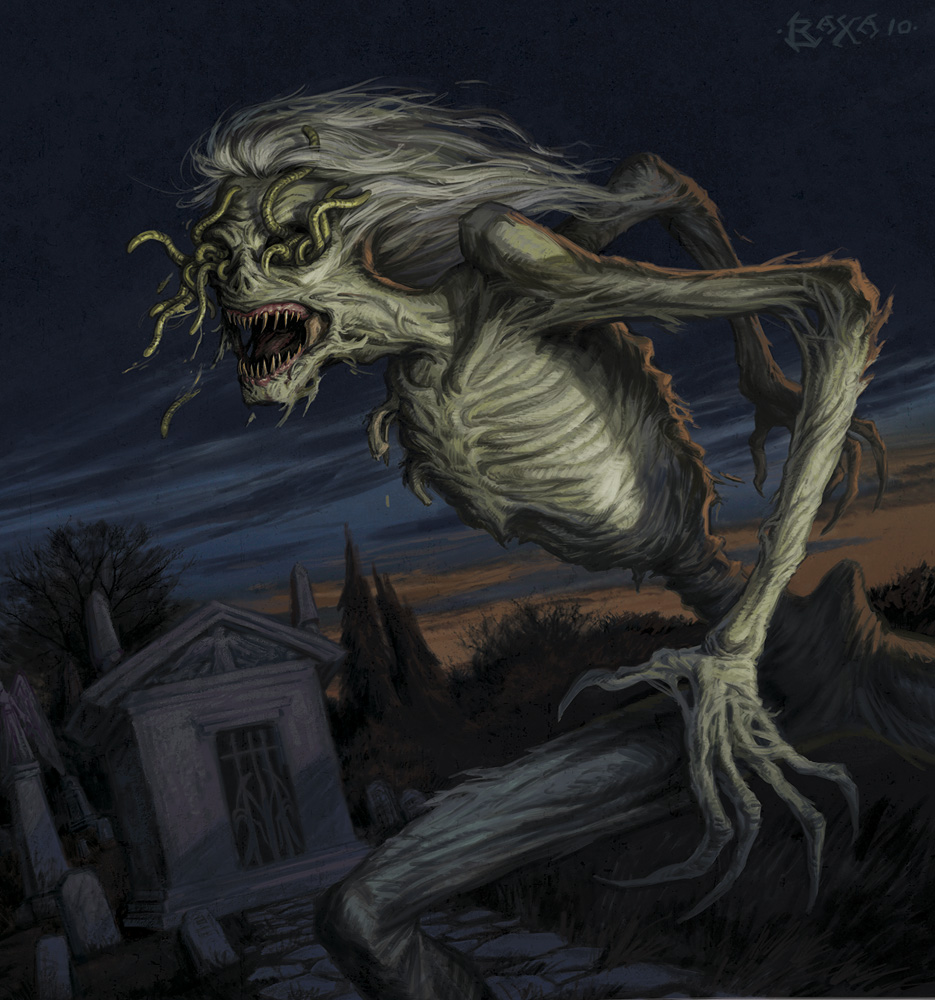 Then came 4th Edition, where the Spawn of Kyuss had the full weight of the mythology behind it. This was after the advent of monsters like the Worm That Walks and other worm-related creatures had had time to disperse into the population. So the Spawn of Kyuss rose in power, taking its place as a Level 13 creature. The 4th Edition Spawn of Kyuss had a few debilitating abilities–it hit with a powerful slam attack that dealt 2d10+10 damage and also exposed creatures to the Touch of Kyuss (which had an Endurance DC of 20 to maintain or 25 to improve, so no easy task, depending). It progressed steadily worse and worse, with victims immediately rising as either a Wretch or Son of Kyuss themselves upon their death.

And to top it off, the Burrowing Worm dealt 10 ongoing damage (save ends) which increased to 15, ten 20 + stunned–though at any time a successful save could stop the worm’s progress. And victims dying to the worm only become wretches (minion type creatures).

In 5th Edition the Spawn of Kyuss had its lore sorted out. They were created by Kyuss, who was a high priest of Orcus, the demon prince of undeath, and he created these walking plague monsters as an expression of Orcus’ intent to replace all life with undeath. They do not eat, do not sleep, they care for nothing save to slay the living and create more of their kind. Worse yet, creatures transformed into Spawn of Kyuss themselves have their souls trapped within the corpse, preventing the individual from being raised or resurrected until the body is destroyed and the soul released.

In 5th Edition, these undead look much like an ordinary zombie from a distance, until you close with them, and then the mass of writhing green maggots surge forth, eager and hungry to create more of their masters’ dark creations.

These Spawn of Kyuss have better regeneration–they regenerate 10 out of a total of 76 hit points per round as long as they have at least 1 hit point and aren’t in Sunlight or running water. Acid, fire, or radiant damage shuts down their regeneration for a single turn, though. 5th Edition Spawns are able to make two claw attacks, but also launch a worm at one humanoid creature within 10 feet of it. Creatures that fail a DC 11 Dex save have a worm latch onto them, and have their round to try and scrape the worm off. If not, however, it burrows under their skin. Of note though, a creature can be affected by multiple burrowing worms–each one dealing 2d6 points of damage (to a maximum of 10d6 per round) until the victim is cured or killed. Once dead, the hapless corpse becomes a Spawn of Kyuss not 10 minutes later.

These monsters have an enduring place in D&D’s history. They are the plague dead–the corruption that spreads–and given that it is the spookiest of all months, you should consider including a few of these in your next encounter, and see how it turns out for your players.

Join us next time on As The Worm Turns…