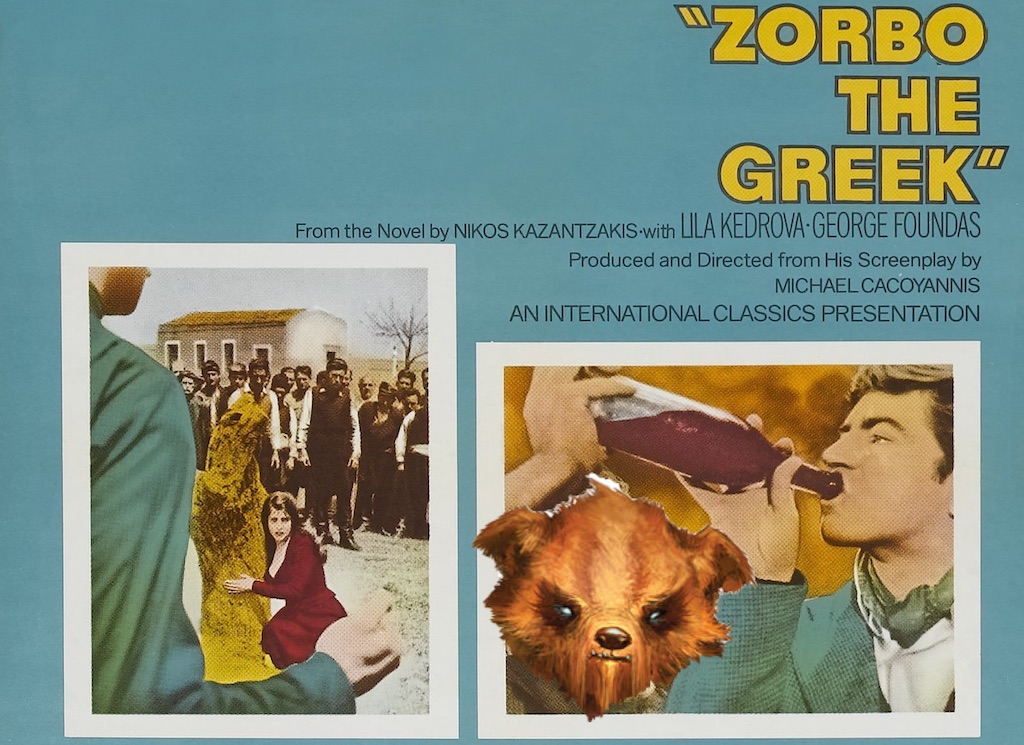 This week, we bring you a monster that’s clawed its way up out of the Tomb of Annihilation–the Zorbo.

This week’s monster is renowned for understanding the world–whether the necessity of madness or the futility of death. It can frequently be seen near Lignite mines, where it expresses a fondness for what life has to bring by pointing out the follies of society-bound folks, though it does seem to attract trouble if left unattended. At any rate, this week’s monster is renowned for its dancing prowess. The sirtaki is a particular favorite of this, an iconic ability of the– 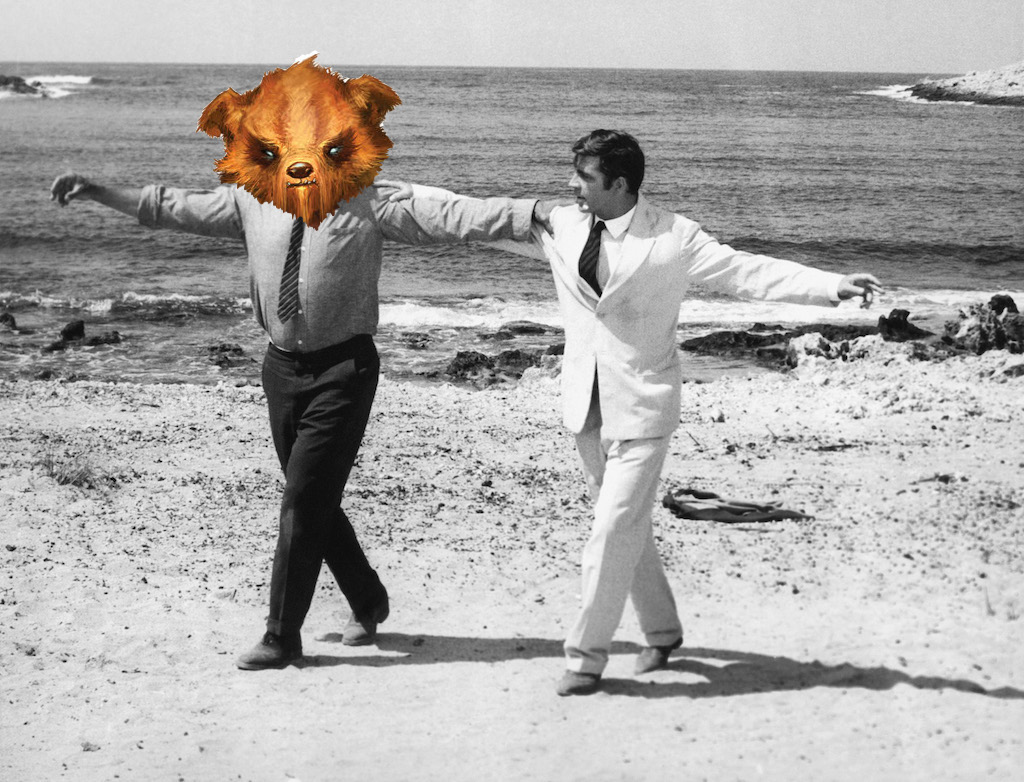 I have just been informed that this week’s monster is in fact called the Zorbo, which is a different matter entirely. The Zorbo is, of course, a carnivorous beast that can accurately be described as a death-koala. It has a taste for human flesh and defensive magic items. And again, pretty good at the sirtaki.

The Zorbo was first seen in the Monster Manual II back in the AD&D days, where it was accompanied by such luminaries as the Aboleth, the Gales Duhr, and my favorite, the clockwork creatures known as Modrons.

Now it bears mentioning that the Monster Manual II also included the Stegocentipede and the Stench Kow, which is exactly what you think. But that’s why the original MMII has such an enduring legacy–it’s a place where the designers took risks, and pushed at the edges of this burgeoning hobby. That’s why you’ll find so many now-iconic creators within its pages. MMII is where you start to see cool rules interactions and abilities and high level monsters appear. When it was first published, one critic called it inimical to the life of an adventurer, and with monsters like the Zorbo lurking in its pages, it’s easy to see why. 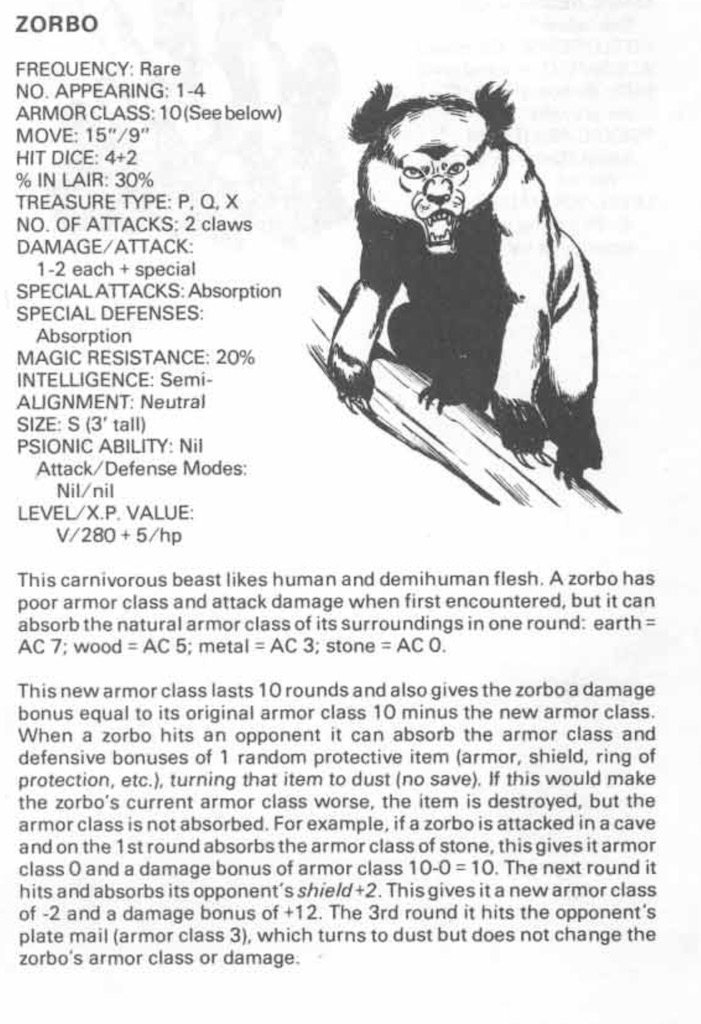 As you can see, there’s a lot that the 1st Edition Zorbo could bring to bear against unsuspecting adventurers. It absorbs armor class based on what material is in its environment. And moreover, Zorbos get hardier as you fight them. They take on the defensive bonus of random items in an adventurer’s possession, gaining decreased armor class and extra damage in the process. So the more powerful the party, the deadlier the potential for the Zorbo.

The 2nd Edition Zorbo, is much more explicitly a Death Koala. They’re even described as often being mistaken for a black and white koala bear, and have used this to lure more than one adventurer to their doom, scratching their back against some piece  of stone innocuously, like a bear might scratch their back, only to absorb the armor class it needs to fight the adventurers hoping to meet a cuddly new friend.

And their abilities remain largely unchanged from 1st Edition, though they are codified a little more. Thera an order to which the Zorbo absorbs magic items, shield -> armor -> bracers -> cloaks -> rings -> passive items like a staff of power or defending weapon. As before, these items are immediately turned to dust. So doubly terrifying to fight these guys. They’ll give even Rust Monsters a run for their money in terms of creatures the players don’t want to run into.

We also get a glimpse of the ecology of these creatures and learn they mate for live, typically live in matched pairs, and there are rare occasions where they’ll band together in larger tribes for survival. And that their roar sounds like a bear cub crying, so not only do they look adorable, they sound adorable as well. And because it wouldn’t be 2nd Edition without a detailed guide on how to use the parts of the creature, we learn that their hides, when used in the creation of a magic item, can add to its item saving throw. 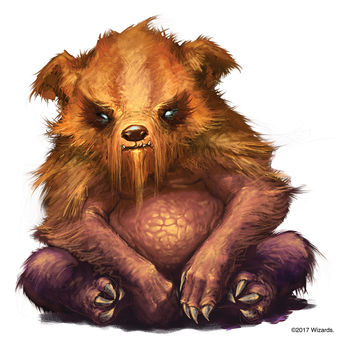 After 2nd Edition, though, Zorbo disappears from the public eye. There’s no sign of them in 3rd or 4th Edition, which is just as well because we don’t need a Zorbo climber or Zorbo scything blade to add to the nigh-endless variety of that edition. Indeed, the Zorbo all but went extinct until the Tomb of Annihilation came along. With its death curse, monsters that are vaguely aware they live in a world populated with adventurers, and a sense of humor, the Tomb of Annihilation is a perfect fit for the return of the r Zorbo. They’re this idea that’s silly on the surface, but that has surprising depth–so too the Tomb.

And the 5th Edition Zorbo is a treat: they have natural magic resistance and retain that armor absorption ability, though stone is no longer the end game, the new progression is wood/bone, earth/stone, metal. And it retains the magic item destruction on its attack as well, though notably it has been scaled down for use in 5th Edition. It no longer instantly and immediately destroys a defensive item–they now get a save (DC 11), deteriorate one AC point at a time, and the absorption only stays around for one turn. But, they are no longer limited to only absorbing better and better items. Anything can add to their protection no matter how well armored the Zorbo gets.

And when it hits, it hits hard, especially for being a Challenge 1/2 creature. It reinforces the idea that alone, this might not be a threat, but if encountered in a colony–run away.

And that’s the Zorbo. Cuddly, heavily armored, deadly. If your want something that will make your players sit up and notice, especially if they’re not used to feeling fear around the table, you might give this cute little guy a try.

Death koala is absolutely not to be confused with a Drop Bear.

Author: J.R. Zambrano
Bell of Lost Souls Staff Writer and DM, J.R. covers RPGs of all stripes and on occasion eats sandwiches. You can ask him about either at [email protected]
Advertisement
Dungeons & Dragons Retro Games Rules Wizards of the Coast
Advertisement