11 Factions got new Stratagems in Chapter Approved – Did your faction’s stratagem(s) make our list?

This 1 CP Stratagem is only useable by the Watch Master, but if he’s within 1″ of a Vehicle, he’s going to be able to cause D3 Mortal Wounds on a +2. That’s pretty solid no matter how you slice it. That could be the difference between him getting smashed by a Walker or tipping the scales in favor of the Deathwatch. Plus, we really liked the idea of it thematically – it’s some Ancient Machine Spirit that messes with tech. That’s totally something a Deathwatch Kill Team would bring on a mission! 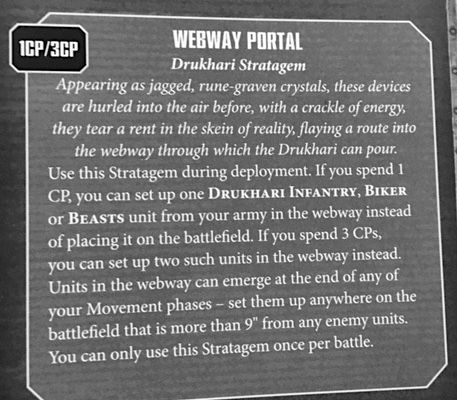 The Drukhari and the Harlequins both got access to the Webway! These two are basically the exact same as the Craftworld version with the slight change that it applies to Infantry, Bikers and Beasts for the Drukhari. The Harlies only get Infantry and Bikers. Regardless, giving these armies access to a super accurate Deepstrike is pretty good for them. You could use these to deliver some deadly CC units or drop in for some truly nasty shooting attacks. Both armies have some scary options if they can “get there” and now with the Webway they can! 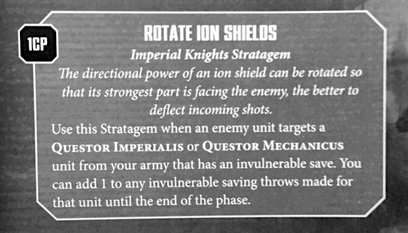 This one isn’t too flashy. It’s not even a gimmick. Rotate Ion Shields really just gives you a +1 to your invulnerable saving throw on your Questor Imperialist or Questor Mechanicus units – ie, KNIGHTS. Most of the time this will bring you up from a +5 save to a +4 save. For 1 CP, I like those odds. You’re already a Knight so your opponent is going to have to use their big guns to really do anything meaningful, why not make those shots bounce on a +4? Conversely, this could also be used in the Fight phase, too – it doesn’t say “targeted in the Shooting phase.”

(note for clarity: Ion Shields are a +5 Invulnerable save vs shooting attacks, but if your opponent managed to do something to target you out of sequence with a shooting attack during another phase, then you could use this stratagem – it’s not limited to JUST the shooting phase.) 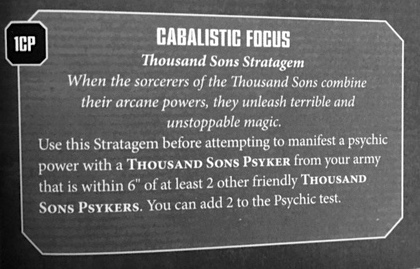 Cabalistic Focus is perfect for interlaced Thousand Sons Psyker units. For only 1 CP, you get a bonus of +2 on your Psychic Test roll! Oh and there is no reason this doesn’t stack with Magnus or Ahriman’s innate psyker bonus. Like you needed another reason to see Magnus on the table…but at least he’s got bring some friends this time!

I don’t know if everyone knows this, but the T’au like to shoot things. Markerlights help them do that. Okay, all jokes aside – I know there are probably people who have had traumatic tabletop encounters with T’au and their Markerlights. Well…that was pre-8th edition. Right now, the Markerlight chart is mediocre-to-okay. It’s not anywhere near what it used to be “back in the day.” Here the chart to prove it: 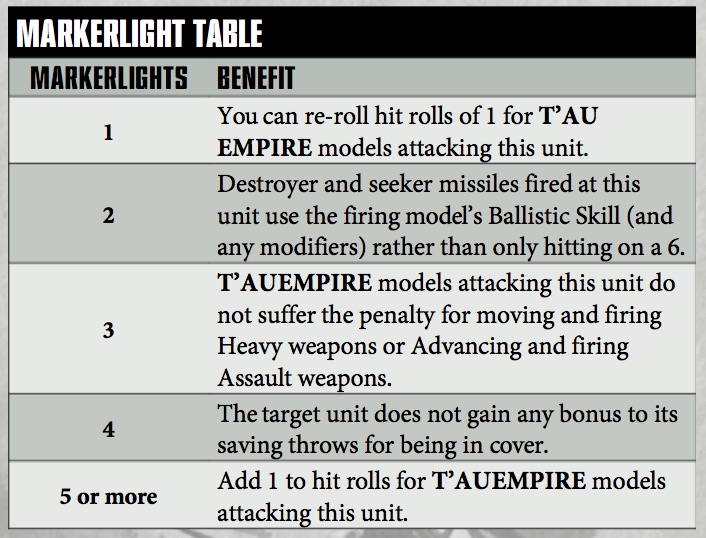 See – it’s actually not that scary…until you get 5 or more lights on a target. That’s why this stratagem is so good for the T’au. First off – notice that you don’t have to spend the CP until after you’ve already hit. It’s a guaranteed D3 extra lights! Most units with Markerlights are going to hit on a +4 most of the time and you’ll probably get a reliable 2-3 hits. So getting a bonus D3 lights suddenly makes that “5 or more” range feasible. And that’s when the T’au Shooting goes from bad to worse for your opponent. 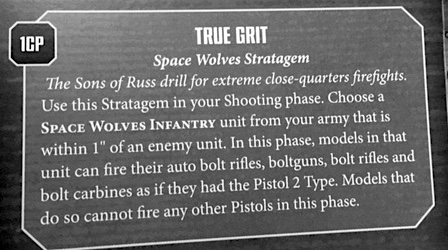 The Space Wolves are getting a pretty great boost with the True Grit Stratagem. All of the bolt weapons (minus Stormbolters and Stalker Bolters) get turned into Pistol 2. Most of them already have Bolt Pistols so it’s not that much of an increase – but it’s still 1 extra attack. Keep in mind that Primaris Marines can’t even take Chainswords. And Primaris with Bolt Rifles are actually getting to take two shots with a -1 AP so that is a marked increase…when they can take them. It might not come up that often, but hey – that’s why this is a BONUS and not in our top 5!

Those are our picks for the Top 5 Stratagems in Chapter Approved! Do you have a favorite?