11 Factions got new Warlord Traits – but who’s the best of the best? Let’s take a look!

We’ve been chewing through the new Chapter Approved 2017 this week. Goatboy had some of his initial thoughts. We loved the new Apocalypse stuff. And we’ve got our picks for the best Stratagems in the book as well. Today we’re taking a closer look at what we think are the best Warlord Traits from the book. There are only 5 slots and 11 factions however…Will your favorite make the cut?

Take a minute to think about what this trait does. “Heroic Intervention – no one even uses that…” I hear you say. “What does that even do?” Yeah – what DOES that do?

Your Genestealer Cult Infantry units get to jump into combats that they may have been excluded from. Smart players will use this in combination with speed bumps, bait units, and the OTHER abilities of the GSC to setup tricks and traps against their opponents. The way that army works, this is going to be pretty good for the Genestealer Cult! 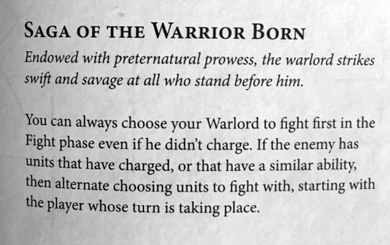 As a Space Wolf Warlord, killing stuff in melee is like breathing. This ability allows the Warlord to fight first in the Fight phase, even when they didn’t charge. That’s going to be great for making sure your Warlord gets to activate and get some glory in Close Combat!

The Deathwatch aren’t the only ones who’s Warlord got a nifty “Re-roll failed X” ability. However, the Deathwatch get a flat re-roll to failed wound rolls vs Vehicles and Monsters. And based on the Clavis stratagem we saw yesterday, it’s a good bet that your Deathwatch Warlord will be gunning for Vehicles anyways. On top of that, this bonus applies to both shoot AND melee attacks – oh and it also applies for Overwatch, too. There are no “phase” restrictions on this. 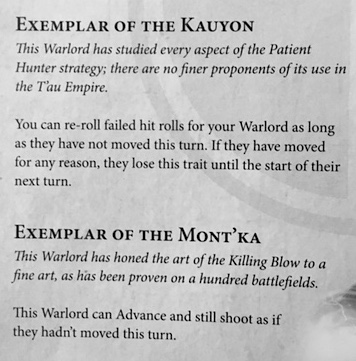 The T’au get T’wo Warlord traits to choose from and we figured why not just show them both off! Both of these have some merit, but we keep thinking that the Mont’ka version will be pretty popular for those Battlesuit commanders with multi-shot Assault weapons. However, the more we thought about it, the more we felt like we weren’t thinking big enough. Don’t discount good old Longstrike…

We saved the best for last. If, for some reason, Magnus ever failed a Deny the Witch test he can now get a re-roll. Given that he can attempt to block 3 powers a turn already and the fact that he didn’t have a ton of Warlord trait options to begin with – this one seems like a no-brainer. Arrogance of Aeons, indeed.

Those are our picks for the top 5 Warlord Traits in the new Chapter Approved! Which one is your favorite?