It’s a new twist on a classic as Settlers of Catan “takes the black” and defends the Wall – Pre-orders now available!

Settlers of Catan has gotten a major face-lift and reworked in a new version of the game. A Game of Thrones Catan: Brotherhood of the Watch is a re-imaging of the board game classic with new rules, new goals, new mechanics, and a whole new theme: Defending the Wall. 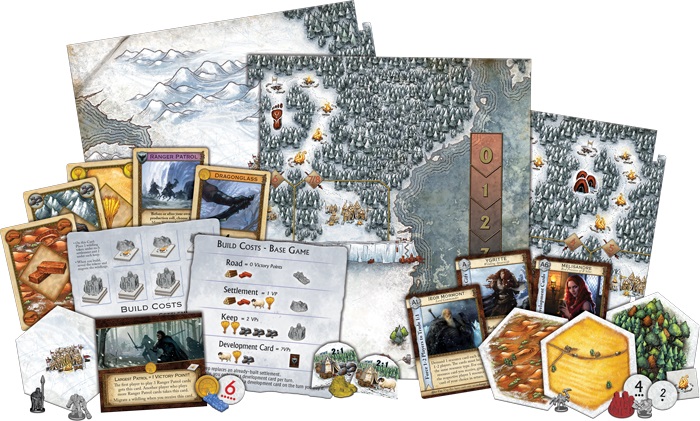 You are recognized by your fellow brothers of the Night’s Watch as a natural leader. You oversee a small cadre in their day-to-day duties, and it is your responsibility to ensure that the defenses of the Wall are properly manned by guards. To accomplish this, you must secure a steady flow of resources from the small settlements and fortified keeps in the Gift. If you do your job well, you may well become the new Lord Commander. But you are far from alone in this venture. You must call upon fellow members of your Order and other allies from the North to aid your pursuit of power. Today, we’re pleased to offer a preview of the heroes of A Game of Thrones Catan: Brotherhood of the Watch!

In A game of Thrones Catan: Brotherhood of the Watch, players assume the role of a leader in the Night’s Watch. Your mission is simple: defend the Wall. To do so, you’re going need to gather guards – they will need resources and support to do their duty. That’s where you come in. You’ve got to gather those resources and develop infrastructure to support your men. You must settle “the Gift” so your men can survive the on coming winter.

The Brotherhood Stands Together

One big change in this version of the game is that there are Hero Cards that can aide you. After-all, in the Night’s Watch, no brother fights alone! These heroes work alongside your men and all have special effects they can impart on your turn. If you want to be successful at the game, you’ve got to manage their unique abilities to best help your cause. 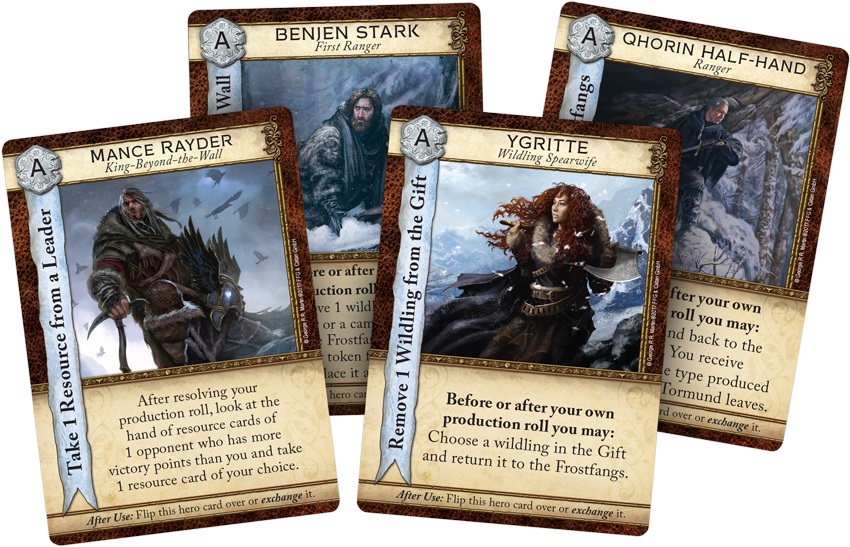 However, this is A Game of Thrones and loyalties shift. Over the course of the game Heroes might abandon you or you might be forced to swap heroes. Only the players who can adapt and play the politics side of the game will have a real chance at victory.

Keen-eyed readers may have noticed that there are two Wildling cards above. “Those are members of the Watch!” That’s true! They are the free folk who you can forge alliances with to try and advance your own agenda. They might not have any loyalty to the Night’s Watch, but savvy players will use them to their advantage. Ygritte, for example, removes a wildling in the Gift and return it to the Frostfangs. 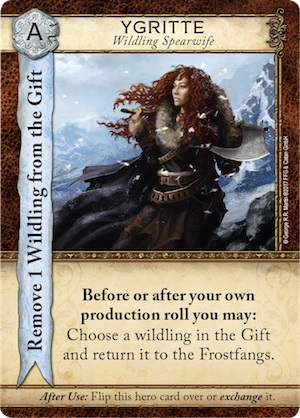 You can do that before or after a production roll. That helps you do two things. The first is that it helps maintain order in the North – less wildlings to deal with on the Southern side of the wall. The second is that it can delay your opponents from gathering resources.

A Game of Thrones Catan: Brotherhood of the Watch is a everything you like about Catan but with a new spin on it. If you enjoy Catan but would like to try something new then check this one out from Fantasy Flight Games. Pre-orders are now available!

A Game of Thrones Catan: Brotherhood of the Watch $79.95 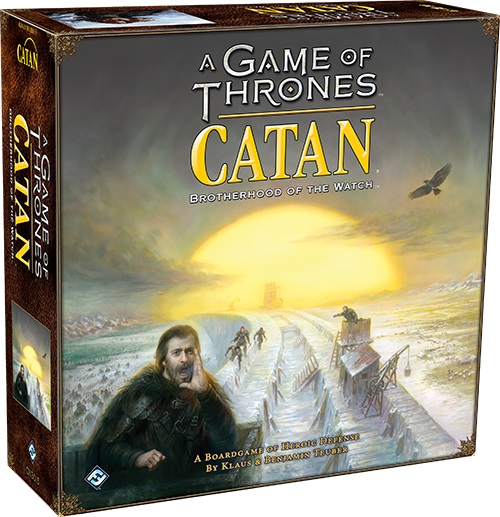 The battle to defend the Realms of Man begins in A Game of Thrones Catan: Brotherhood of the Watch, a new strategic game designed by Klaus and Benjamin Teuber and grounded in the engrossing world of George R. R. Martin’s A Song of Ice and Fire series. Take the Black. Defend Westeros. Become the Lord Commander.

Author: Adam Harrison
Writer, Editor, Texas Native, and Austinite for 15+ years, Adam covers all things Tabletop Gaming. Which includes Warhammer 40,000, Age of Sigmar, D&D, Board Games and everything else that involves dice, boards, cards and a table. A hobbyist, player, and collector of miniatures and games, Adam's current obsession are his Death Armies for Age of Sigmar, his Blood Angels and Tyranids for 40k, and his ever growing Arkham Horror: The Card Game Collection.
Advertisement
Board Games FFG - Fantasy Flight Games Game of Thrones Tabletop News
Advertisement