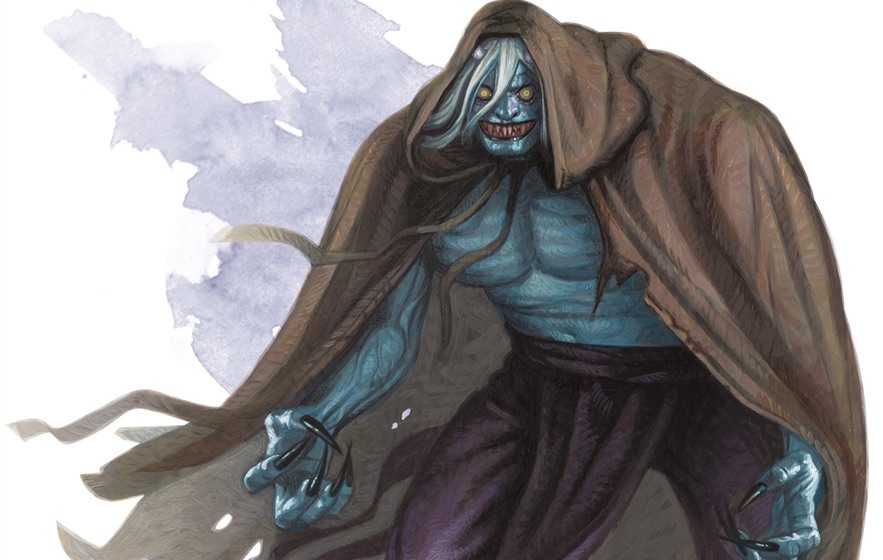 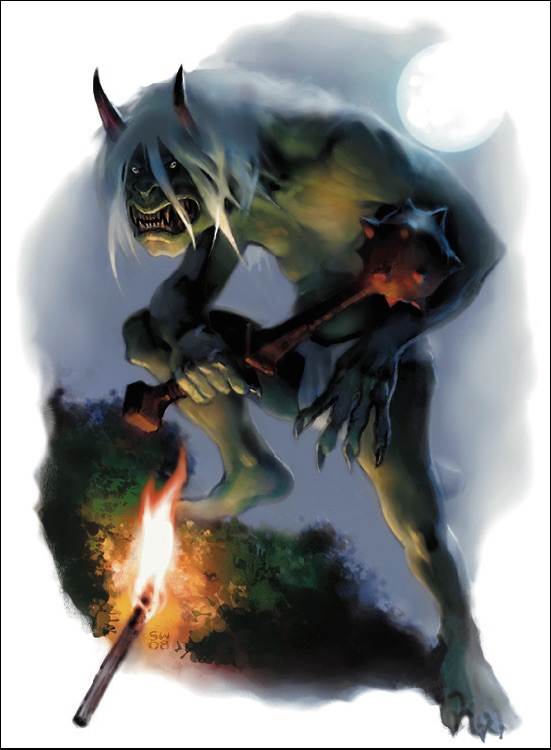 This week’s monster is a gas–for a maximum of an hour out of every day.

Hailing originally from Japanese mythology, then arriving in the game by way of Greyhawk 1975, Ogre Mages have been a part of the game since the dawn of time. Well. Since the dawn of the game–they’re one of the more iconic monsters, though maybe not quite as iconic as a Beholder or a Mind Flayer–they’re one of what I like to call teaching monsters. They are complex monsters that come with some built-in tools to help both players and dungeon masters. They regenerate, meaning that players will have a harder time brute forcing their way through the encounter, they come with spells that they can cast innately and once per day, meaning that DMs will have to keep track of what powers they’ve used. They have a built-in escape mechanism in their gaseous form spell, and can hit surprisingly hard if players aren’t prepared for them.

In short, Ogre Mages are a great tool to help teach players and DMs how to play the game. You can run them fairly straightforward, relying on their regeneration and glaive attacks to be a threat, but as you have a chance to use them (there’s a good likelihood they’ll recur as a monster given their regeneration and ability to escape combat), DMs can get a little more in-depth with their tactics. Their powers all suggest some built-in synergies–they can create darkness and become invisible, they can change their shape and shoot cones of cold–the key is that they have different avenues of attack. They can be hit-and-run skirmishers, they can go toe-to-toe, they can blast a party and make them consume precious resources.

In short, an Ogre Mage can punch above their weight, but also can be a threat that is “driven off” by lower levels. They’re one of my favorite monsters–if you’re playing in 5th Edition, Ogre Mages are a fantastic early campaign villain. Even as your players outstrip them in terms of power, it’s easy to have them be a recurring thorn in the side kind of foil/rival/antagonist, you just have to get a little more creative with the polymorphs.

At any rate, Oni have been around in D&D since before D&D was D&D. They appear in the Greyhawk 1975 supplement with its famously over-it Beholder.

Even then, Onis were identified as Japanese Ogres–their origins in that mythology were reflected in the powers they had (and still have). Ogre Magi as they appeared back then bear a striking resemblance to what we see to this day: they could become invisible, fly, and create darkness at will. Once per day they can charm person, cast sleep, assume gaseous form, and create a proto-cone of cold. Their regeneration was there, as was their signature glaive, which dealt 1d12 damage with their single attack per round. 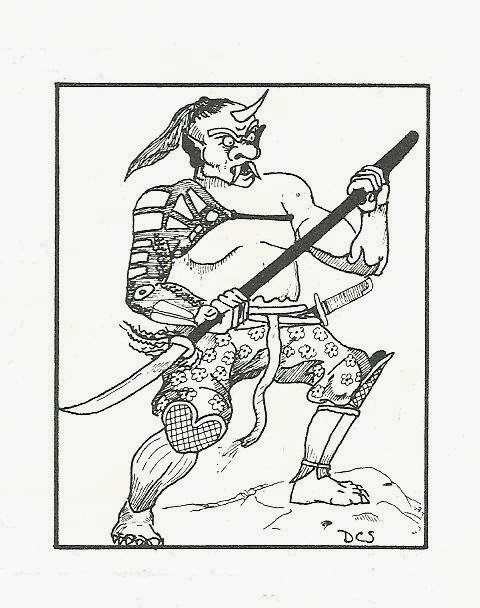 First edition Ogre Mages got some art, again reflecting their mythological origins. For contrast here’s an Oni in peasant clothing from the Tokugawa era:

You can see the resemblance–but you can also see the resemblance to the current Ogre Mage. This is one monster that has changed very little throughout the editions. The idea of an Oni/Ogre Mage is very clear: blue skin, horn, glaive attack–they get fly, invisibility, darkness, and can polymorph themselves into a human or humanoid form, and can regenerate. Once per day they get the powers listed above–charm person, sleep, gaseous form, and cone of cold (though in 1st edition it’s still not codified as cone of cold, it’s just a ray of cold mimicking that from a cold wand that does 8d8 damage).

They are straight up from Japan (though later they hail from Kara-tur), and adding to that idea of a teaching monster, they are often encountered with an Ogre Magi Chief who fights as a 9 hit die monster. Here is an object lesson for players in how to advance monsters, or at least customize them for their own players. This ogre mage chief could be a great threat indeed to a party that stumbled into their lair. 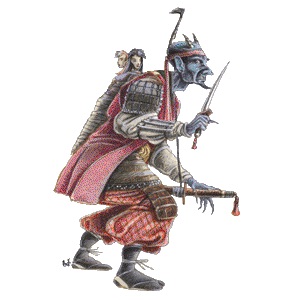 2nd Edition Ogre Magi get a little more lore to their entry, despite having to share space with the Ogre and the Merrow (Aquatic Ogre). Mostly this means talking about their living situations–they typically dwell in fortified places, in small tribes where one might encounter Ogre Magi, an Ogre Mage Priest, or the Chief of Great Strength (the 9 hit dice version mentioned–the vanilla ogre mage is 5 hit dice). Their living places, specifically, could be turned into a powerful fortress if players could clear out the ogres from within. Which leads us all back to the best part of 2nd Edition, reaching the level where you’d get a cool title and build a stronghold and attract followers. 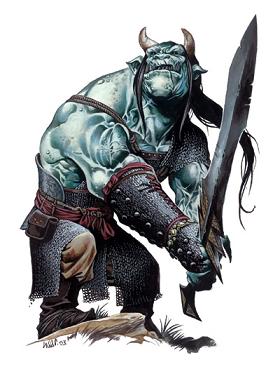 3rd Edition Ogre Mages look atrocious. They lost some of their unique flavor as well–gone was the special ogre mage only language that they spoke, replaced with Giant and Common. They retain their higher intelligence and spell like abilities, as always, and their fly speed gets a little bit of a buff. They are much tougher than their previous cousins, owing to the fact that they are Large in a system that rewards high attributes and size in addition to the changes to the way regeneration worked in 3.x. Only fire or acid could overcome its native regeneration, which was 5hp per round. And it had spell resistance. Not much, mind you, but enough to be a threat to low-level wizards.

Their true strength in this edition was as player races though, They were included with the rules to make them player races, and to be certain, had a +7 level adjustment, but with their native spellcasting, you could squeeze a lot out of that build, without even having to rely on Savage Species. Though if you did–the possibilities blossomed (as did many builds sourced out of that book). 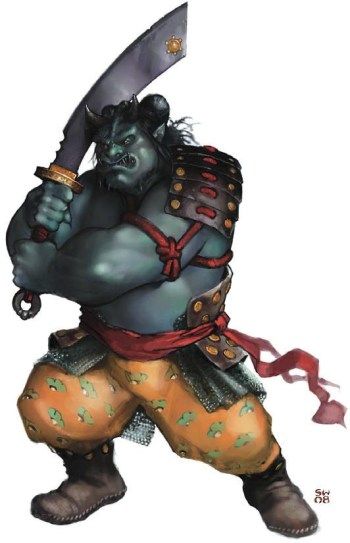 In 4th Edition the Ogre Mage becomes the Oni of legend. Though they keep most of the other lore characteristics. You have Oni of all varieties who are renowned for building cleverly hidden strongholds and garnering wealth and slaves and other resources to secure their place as rightful rulers deserving of other creatures’ respect. 4th Edition was the variety pack of monsters, so you had two versions of Oni in that first book–the Oni Night Haunter and the Oni Mage.

Both of these were elite monsters with powerful abilities. Oni Night Haunters are all about putting foes to sleep and then slowly devouring their souls. They keep many of the same powers, though they do lose the cone of cold ability. And their flight is at its worst in terms of maneuverability. The Oni Mage, on the other hand, has the invisibility and cone of cold. And a lightning blast. And it dealt sneak attack damage, attacking, as it did, with that greatsword (pictured above). 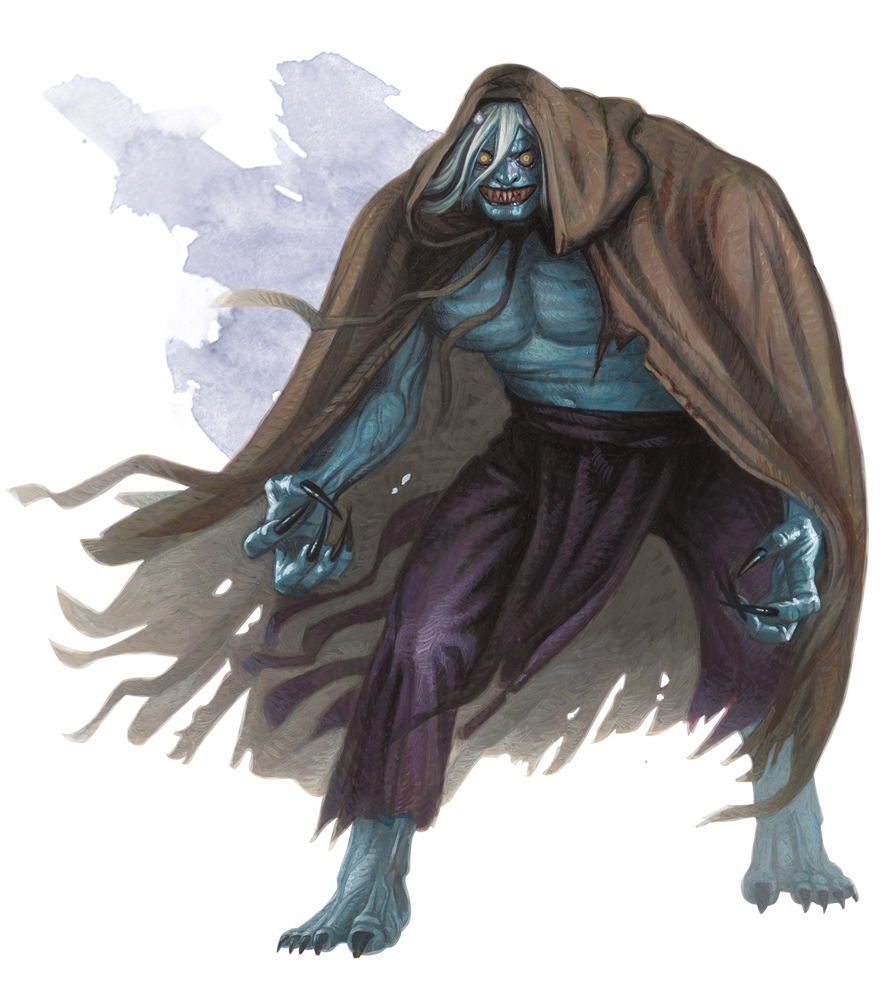 Finally we have the 5th Edition Oni. These Oni are back to basics, returning to form with the same familiar powers we’ve known and loved through 4 other editions. Depending on how you count. Oni are presented as a distinct species from Ogres, only distantly related though they share some of the Ogres qualities, like size, musculature, and propensity to join forces with other evil creatures.

In 5th Edition, Oni have 13 hit dice, and have a decent save DC–they also gain multiattack and their regeneration shoots up to 10hp per round, making them quite formiddable indeed. Oni are treacherous and cunning monsters in this edition–and as before, they’re great as an example for players and DMs alike to learn from.

And that’s the Ogre Mage, one of my favorite monsters. If you’ve never run one, give them a try. They’re great harriers, and have the ability to keep a party guessing. They reward cleverness on the part of DM and Player alike–so take some time, really think about what you want to do with them (or against them) and enjoy.

The best part is, once players have encountered an Oni, any humanoid or giant they run into later has the potential to be that Oni.

Author: J.R. Zambrano
Bell of Lost Souls Staff Writer and DM, J.R. covers RPGs of all stripes and on occasion eats sandwiches. You can ask him about either at [email protected]
Advertisement
Dungeons & Dragons Editorials Retro Games RPGs Wizards of the Coast
Advertisement