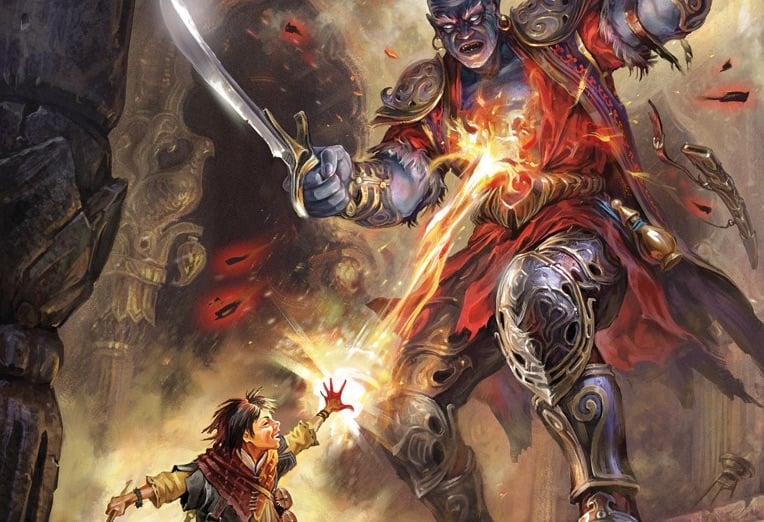 Let yours be the hand that guides the ship of state in the latest adventure, name a leader in this contest.

Today there’s a chance for you to wield power and influence on the world of Golarion. Paizo has put out the call, inviting fans to vote on the next faction leader (interim) for the Liberty’s Edge faction. After the events of A Case of Missing Persons the Liberty’s Edge faction is in need of a new leader. Now is your chance to meddle in the affairs of nations and name a successor. On then, to more details!

Basically, Paizo is following up their earlier coat, which introduced a new player on the Liberty’s Edge scene, wherein fans worked together to create a new npc, Karisa Starsight, who is now one of two candidates for the leader of Liberty’s Edge. So let’s get to know or two friends.

As mentioned, first up we have: Karissa Starsight.

The slaver Kolm Redarax found the infant Karisa aboard a derelict Bonuwat ship, and he was so taken by her unexplained presence and strikingly blue eyes that he adopted her as his daughter. She worked hard aboard that ship, tending to the slaves her adoptive father shuttled from port to port. Whereas he saw these souls as chattel, she quietly grew to respect and pity them. As she reached adulthood, Karisa struggled between her love and loyalty for her father and the plights of the people he bought and sold.

Several years ago, Andoren privateers known as the Gray Corsairs assaulted their ship, subduing the crew and freeing the slaves. When the Corsairs’ captain was on the verge of slaying Redarax, Karisa intervened, swearing her own life, service, and freedom to Andoran in exchange for his life. Not want to condemn the young woman to anything resembling slavery, the captain provided a different offer: she could instead apprentice to an upstanding Eagle Knight, and Redarax would live out his sentence in an Andoren prison. Karisa eagerly accepted.

Her mentor was none other than Major Colson Maldris, and she has excelled as his aide. Over the past year, her duties have more resembled those of a steward, overseeing some of the Liberty’s Edge faction’s operations while Maldris traveled farther afield. Even so, there’s a side of Maldris that she’s only now uncovering as she tries to find his current whereabouts and holds together the initiatives he set in motion. All the while she wonders at the irony that no matter his morals, Karisa’s father is in chains while she promotes liberty in the Inner Sea region and beyond.

Strengths: Karisa Starsight has a much more intimate familiarity with the faction’s operations, which inclines her toward making changes and executing missions “within the system” while also watching for hypocrisies that undermine the faction’s goals. She has solid connections within the Eagle Knights without being one herself. She’s also the more self-reflective candidate, likely to examine the faction’s moral pillars and assess how the faction could do better. Even so, her childhood on the seas leaves her ready to tackle threats head-on when needed. 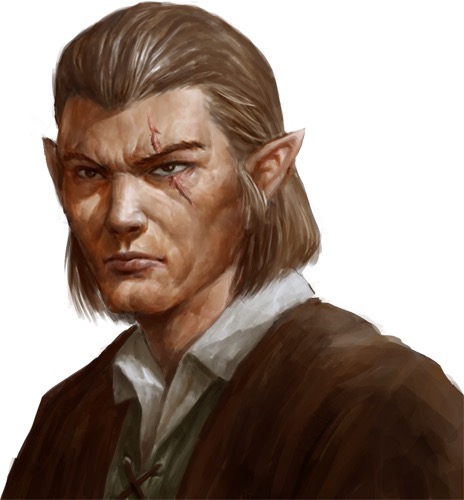 Trained as a sommelier, butler, and shopping assistant, the halfling now known as Tamrin Credence spent his first 26 years as a Chelish slave, albeit a well-treated one. When a tiller (a member of the halfling liberation group called the Bellflower Network) infiltrated the estate and laid plans to lead a few halfling slaves to freedom, Tamrin made a counter-offer: he would create a distraction so the tiller could escape with twice as many souls. The plan worked, albeit at a cost. By the time the tiller returned to lead him out of Cheliax, the halfling butler had received many scars for his deception.

Tamrin Credence is a self-styled name that the halfling adopted in the decade since, both to distance him emotionally from his subjugated past and to create a new identity that wouldn’t lead to his recapture. He’s continued to assist the Bellflower Network as a spy and supplier, often leading him into dangerous territory or treacherous relationships. Although he’s infiltrated and worked with the Aspis Consortium and Cheliax’s port authorities to this end, his most infamous rivalry is that with Zarta Dralneen, whom he regularly undermined while she served Cheliax as that nation’s liaison to the Pathfinder Society. Only once she fell from Cheliax’s good graces, suffered unforgiveable offenses by her former allies, and sought refuge with the Society did the two agents begin finding common ground. They’ve now worked together on coordinating several missions, though years of thwarting each other’s ambitions leave them prone to verbally sniping at each other over unresolved gripes they’re yet to bury.

Tamrin’s experience with the Liberty’s Edge faction is modest, having only worked with Major Colson Maldris a few times before the former began more concerted collaboration in the past 18 months. Even so, he’s a proud “liberator of humanoid assets” with criminal and business contacts in dozens of cities. What he lacks in faction experience, he makes up for in gutsiness, survivability, cunning, and a willingness to lead from the front as needed.

Strengths: Tamrin Credence is a pragmatic individual who doesn’t mind breaking a few unreasonable rules if he can mitigate the harm to innocent bystanders and maximize the benefit for oppressed people. He’s witnessed the dark underbelly of several infamous operations firsthand, and he knows that no matter how seductive those groups might seem at times, they’re ultimately immoral. These experiences have left him hardened against corruption, and he takes a more decisive stance on correcting the faction’s embarrassing past misdeeds. He has strong Bellflower Network connections, though he would broaden his agenda considerably if made the leader of Liberty’s Edge.

There are your potential candidates. Voting is open now, so grad down to Paizo and get your votes in. The winning NPC will feature on December 13th.