Starfinder has your starfaring needs covered with these starship battle maps.

A good Starfinder Crew needs a good ship. And whether you acquire that good ship through legal purchase or other, less licit ways, this latest pack of Battle-Mats has got you covered. With a couple different varieties of Starships, including deck plans that are perfect for interstellar boarding actions as well as role play scenarios involving the crew deciding where they’ll try and take their next job.

And like most things Starfinder, these too will probably sell quickly. Starships are an integral part of the game, whether they’re mobile, derelict dungeons that your players encounter out in the Drift, like some kind of Stacker Pentecost, or as the vehicle that conveys the party from adventure to adventure. After all, Starships are an expected member of any adventuring party, and the game outfits you with rules to help your ship level up as you go.

So pick up some of these flip mats and know exactly where you are on the ship when it all goes terribly awry. That way you can let the GM know that you can’t possibly be caught in the explosion because you’re in the cargo bay, and clearly it was the bridge that got blown up and exposed to the vacuum of space. 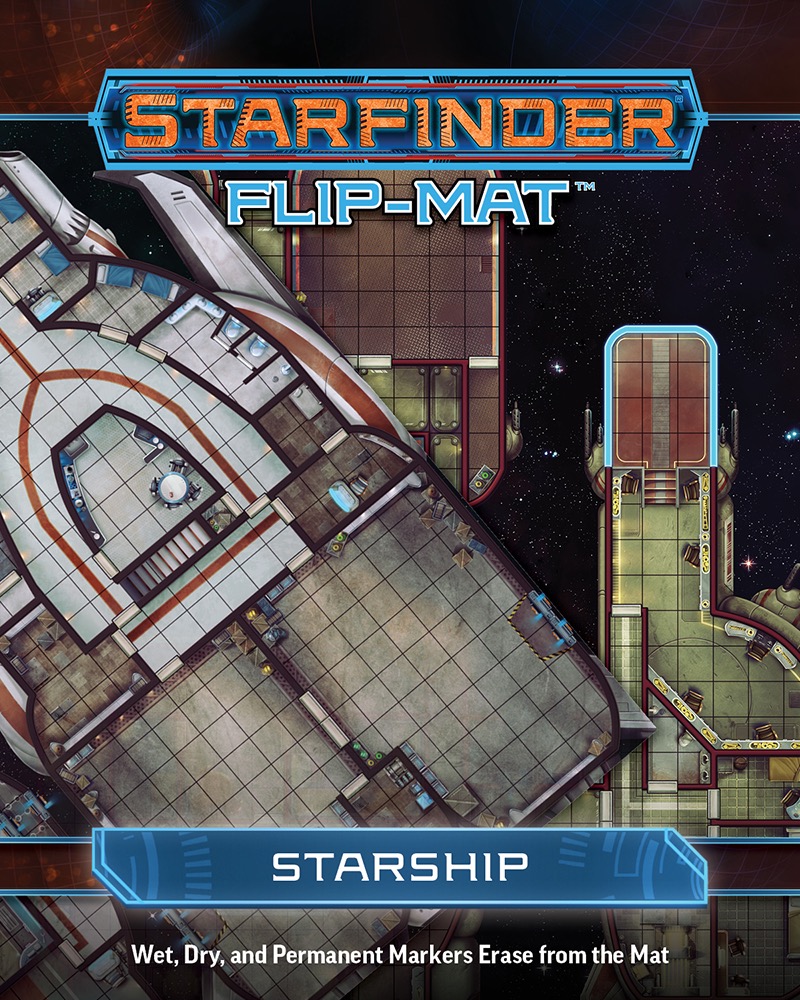 All Crew to Battle Stations!

Mega-thrusters are go! Taking adventure to the stars requires a sturdy vessel to get you there, which is why this Starfinder Flip-Mat provides you with two very different starships to pilot, explore, or raid! On one side of this deluxe, double-sided gaming map is a sleek exploratory vessel, perfect for diplomats, mercenaries, or any other groups making long forays into unknown star systems. On the other is a military dropship that doubles as an industrial freighter, providing your players with a home base, an enemy stronghold to infiltrate, or a mysterious derelict floating in the vacuum of space.

Don’t waste time sketching when you could be playing. With Starfinder Flip-Mat: Starship, you’re ready to meet adventure on its home turf—or burn sky and live to fight another day!

Now at last you’ll know exactly where your character has to be in order to reroute shields to life support (and life support to weapons).