Today we take a stab at the Emperor’s mighty Thunder Warriors – and how we would bring them to the tabletop in 8th edition.

The Thunder Warriors have always held a special place in our hearts.  Here’s the basics on them from Lexicanum to get you up to speed:

“Thunder Warriors were the elite super soldiers that marched with the Emperor to conquer Terra in the Wars of Unification. The engineering that the Emperor used to create the Thunder Warriors, whilst creating superior fighters, was not as efficient as what was used later to create the Space Marines, nor was the technology as advanced or the geneticists as entirely willing. These proto-Astartes were organized in twenty regiments of no more than a few hundred warriors, each named by the Emperor himself. 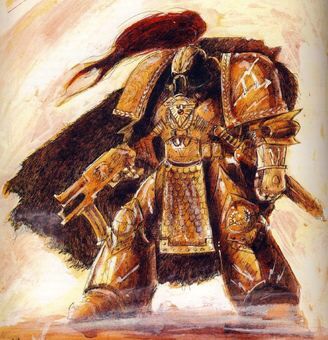 We’ve always wondered exactly what these monsters would look like on the tabletop. We know they were legendary even by Space Marine standards and small numbers of them laid waste to many times their number of Astartes in the aftermath of the Unification Wars. These are the Emperor’s first crude attempts at genetic modification. They were not something as sophisticated and mentally conditioned as the the later Astartes, but were instead a means to an end.  A blunt instrument meant to conquer Terra, then pass into history.  It was said they were hardened against psychic attacks as many of Terra’s warlords used such forces to enforce their will. It was recorded that they could quickly kill and butcher vast numbers of lesser foes on the battlefield compared to their own numbers.

We have had stats for the 30K era Astartes thanks for Forge World, but 8th Edition has turned the page on the old set of rules. Luckily we have Standard Marines, Primaris, and Custodes to use to triangulate a solid stab at recreating the Thunder Warriors on the tabletop of the new edition.

Here is our set of completely unofficial rules for you narrative gamers and Unification Wars fanatics to try out. 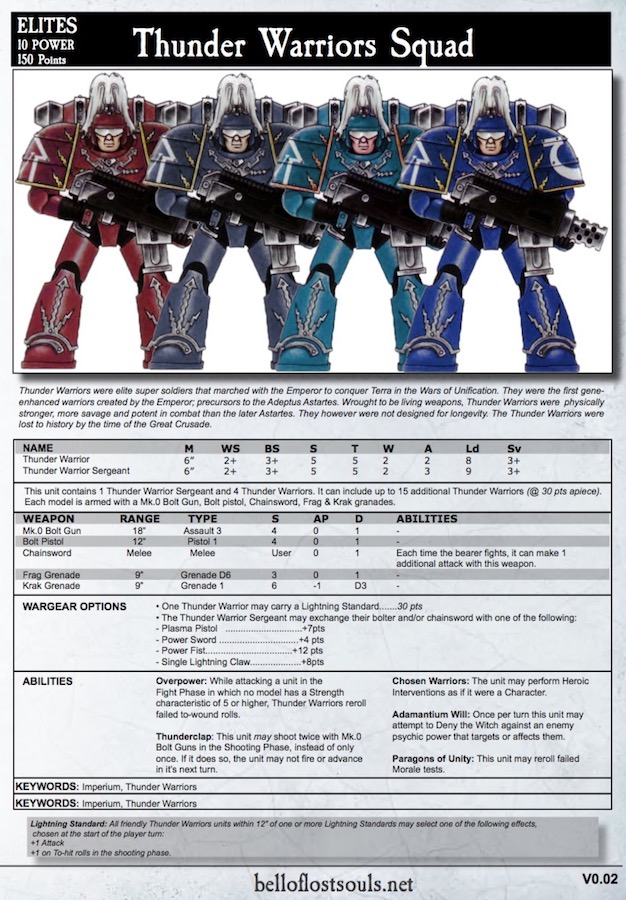 We have envisioned the Mk.0 Bolt Gun as an early crude instrument lacking the later Astartes Bolter’s range, but making up for it in sheer infantry clearing rate of fire. We’ve extended the range of Thunder Warrior grenades to take in account their trans-human strength – an idea lifted wholesale from Necromunda.

What we have here is a melding of the Legiones Astartes army list with some elements from the Adeptus Custodes, and a dash of Primaris mixed in for good measure.  We have attempted to create the blunt physicality and power of the Thunder Warriors.  You can see the early martial prowness that will be burnished into the later Astartes – without much sophistication in either equipment or tactics.  You get a feel for the hulking frames seen with the Custodes, shorn clean of that organization’s lifetime of endless training and superior genetics.  Make no mistake – these Thunder Warriors do one thing. They butcher enemy infantry – and they do it well.

So go ahead and take them out for spin. I’m sure you can use them to recreate the Emperor’s conquest of Terra versus a host of count-as foes, or perhaps even see what might occur if small numbers of the Thunder Warriors survived to the 40th Millenia. Keep an eye out for our “Wars of Unity” mini-dex coming in the weeks ahead – giving you Unification Wars fans a more fleshed out Thunder Warriors force to tool around with on the tabletop. THUNDER WARRIORS HO!

~ Above all – we hope you have as much fun out there using them as we had creating them!

Author: Larry Vela
Dad, Gamer, Publisher, Pilot, Texan. All games all the time since junior-high. I started BoLS Interactive in 2006. I’m a lifelong tabletop & RPG gaming enthusiast, and internet publisher working to entertain and inform my readers every day. I've been playing RPGs and Tabletop Games since the 1970s. I'm been playing and covering Warhammer and Warhammer 40K for over 35 years.
Advertisement
Homebrew Horus Heresy Rules Warhammer 40k
Advertisement