40K Meta – Houston, We have a Dark Reaper Problem

Eldar Dark Reapers are kings of the hill in the 40K meta – but they have strayed a long way from their origins.

We’ve seen a lot of flash in the pan hits come and go in 8th Edition, from Stormravens, to Brimstone Horrors, to Malefic Lords. As each offender is tamed, a new challenger rises to rule the meta.

For the first time EVER – the humble Eldar Dark Reaper is sitting on top – but how long will it last – and why now?

Here is a sample of two winning lists from recent tourneys. 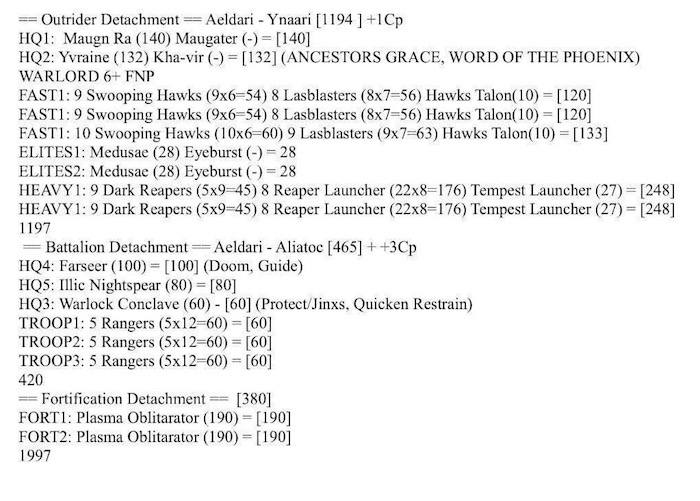 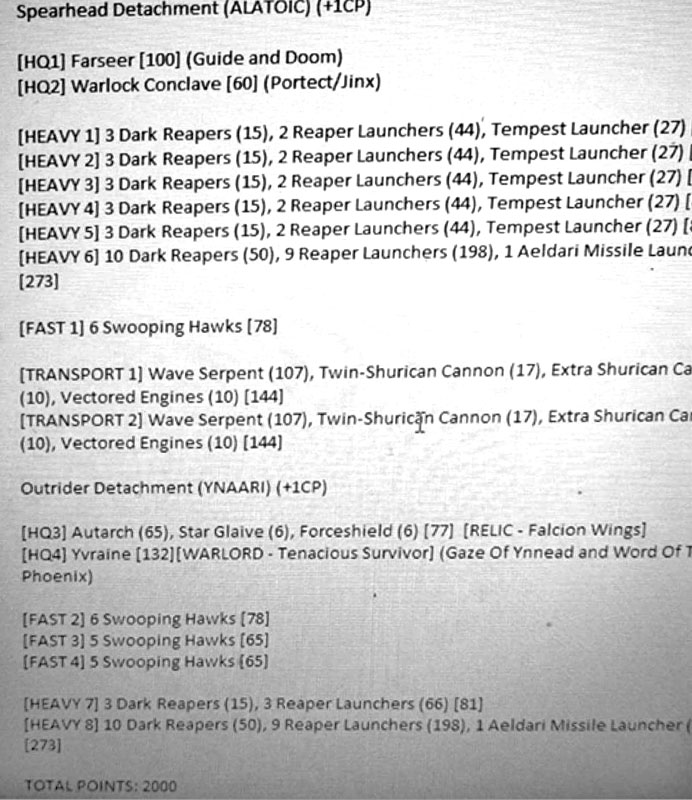 Aside from the minor differences, you can see what makes these lists tick. The Dark Reaper is a potent unit and it is not easily stopped when combined with some other 8th Ed. tricks. 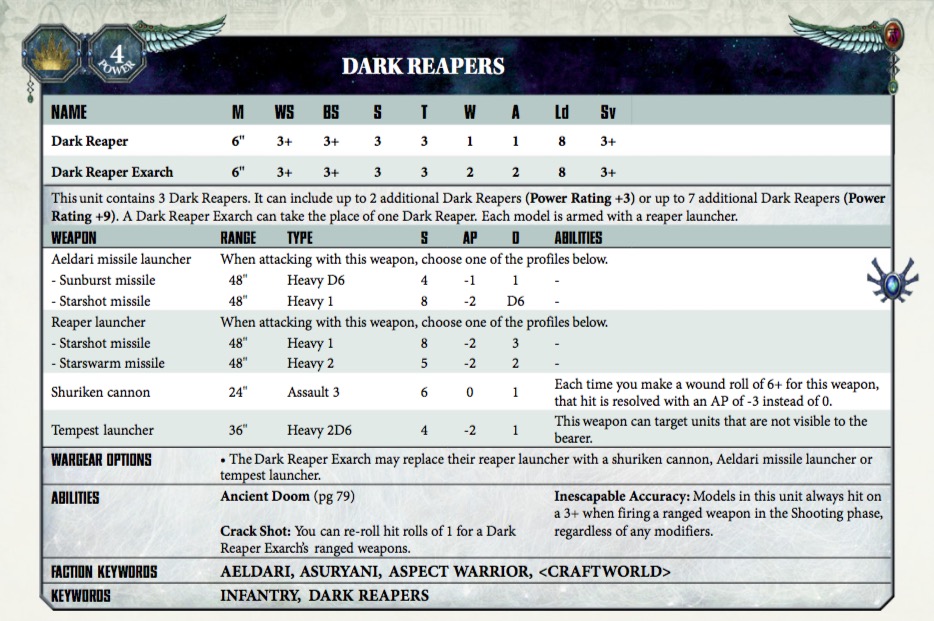 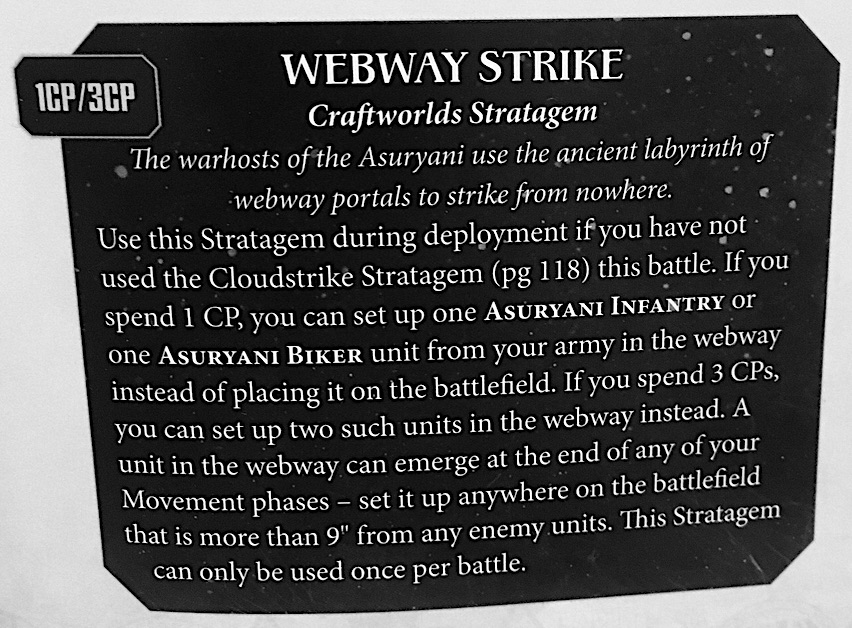 This removes the option of losing the unit to an Alpha Strike and ensures they will get off one volley against the enemy unit most likely to destroy them.  Now add on Fire and Fade to get back out of LoS. Wash rinse repeat.  Oh I almost forgot, make your max-sized units Ynarri to get off an extra round of shooting when you kill an enemy unit (you will).  Use the spammed min-sized units to maximize indirect Exarch Tempest Launcher fire to nail irritating foes hiding out of LoS. 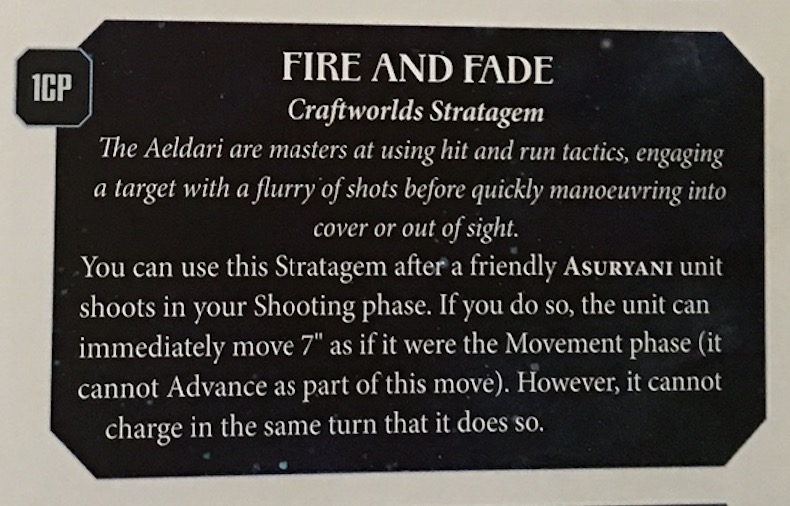 The History of Dark Reapers

Strangely Dark Reapers have been largely ignored for 20 years. Let’s go back and take a quick look at the unit from it’s earliest days to see how it has evolved from it’s original design to what we see today. 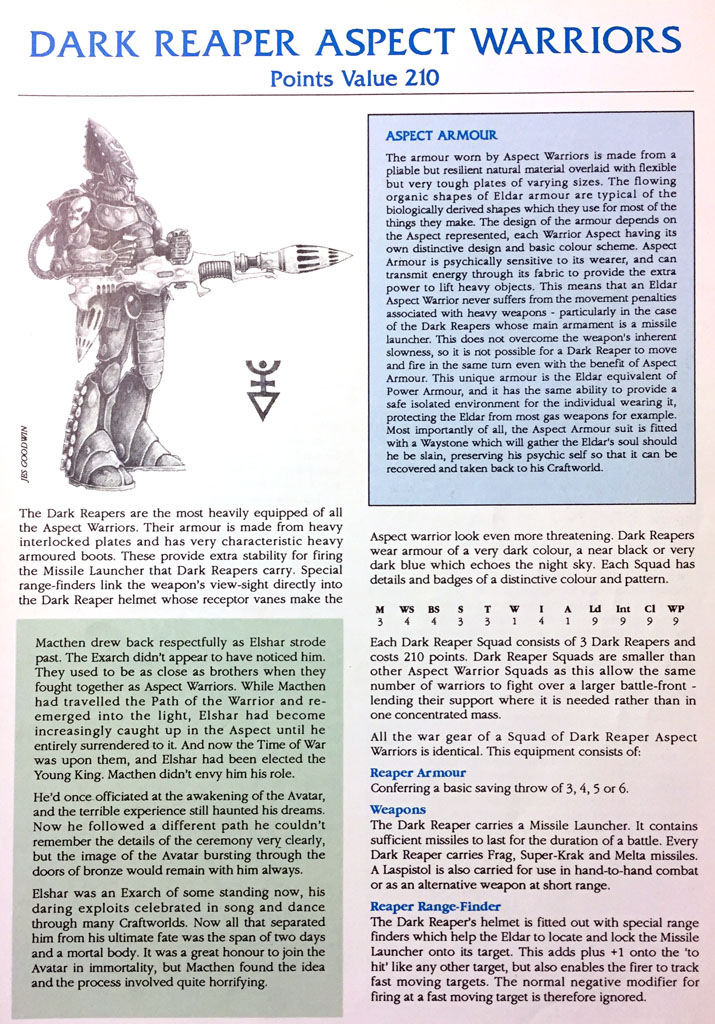 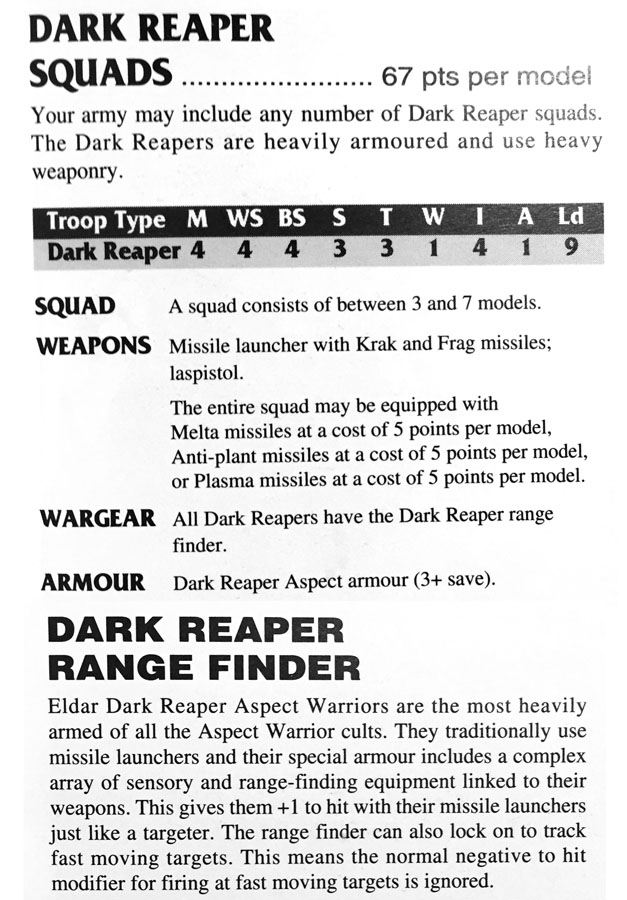 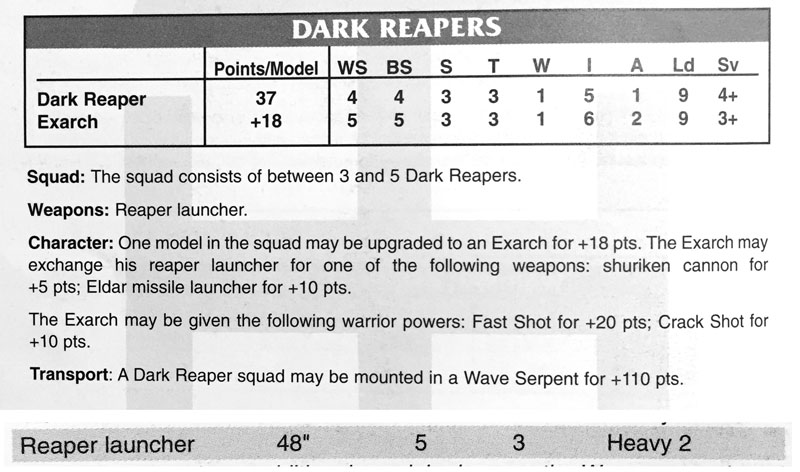 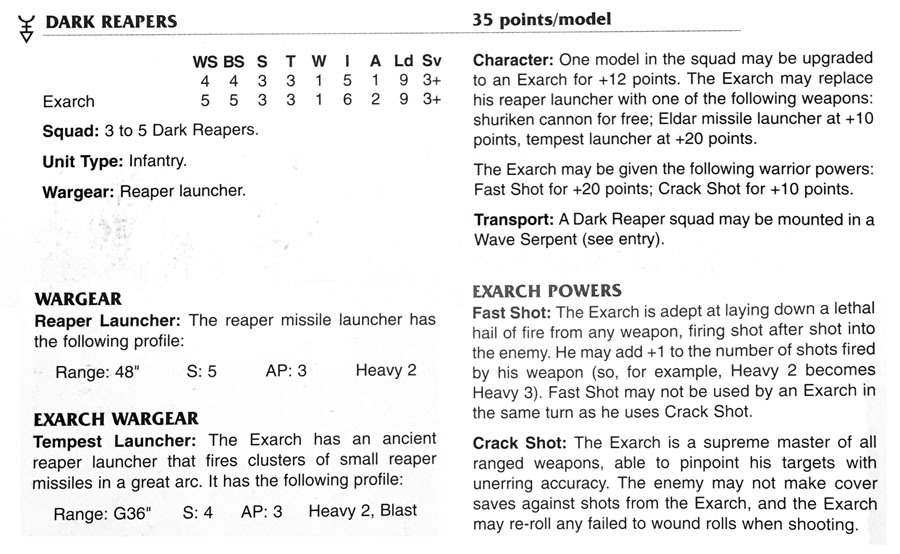 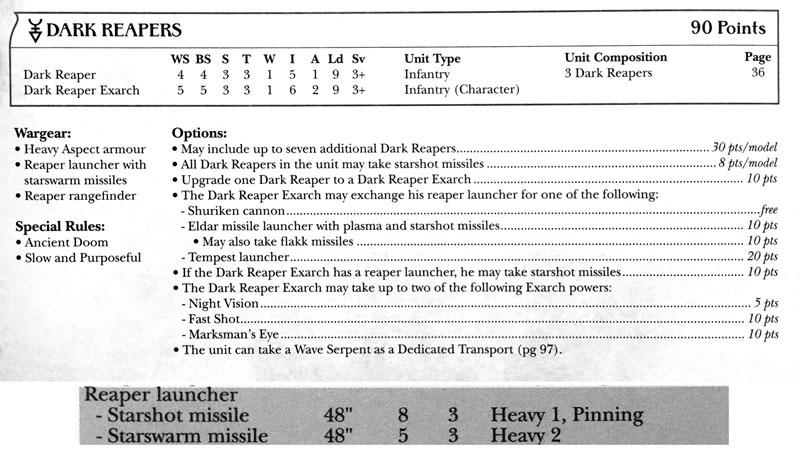 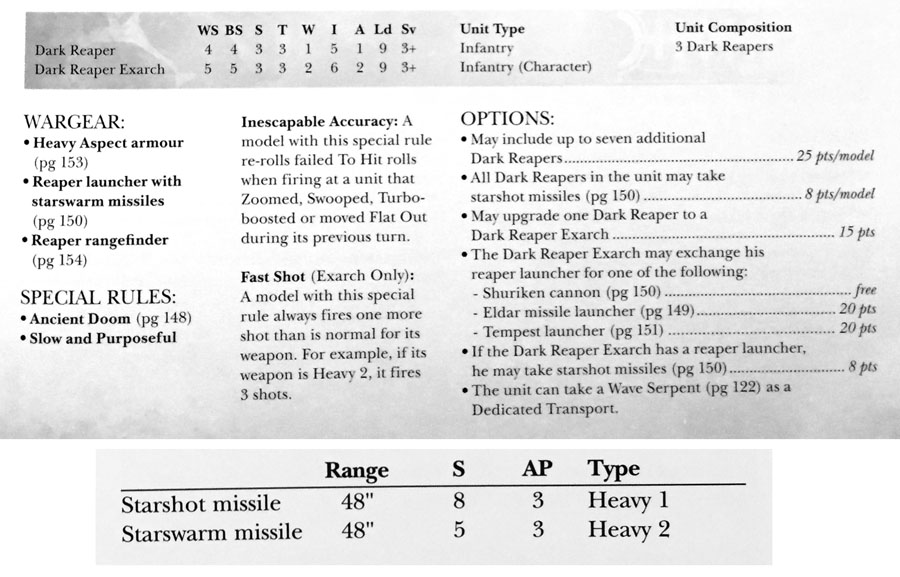 Reapers in all previous editions were hampered by Heavy weapons. They had to endure 1 turn of enemy firing once in position to get off shots. The Squad originally started off small and grew over editions. The squad always had heavy armor to protect them versus enemy fire, and were quite slow. The Reaper Launcher had multiple ammo types over the years, but usually one anti-infantry and one anti-vehicle.

8th given them a new lease on life with the combination of move and fire Heavy weapons and Inescapable Accuracy. This has turned them overnight into speedy units that pop in and out of cover, the webway, vehicles, or anything else to quickly dish out tremendous damage at 48″ range with little an enemy can do to stop it.  Hiding is of no help as spammed Exarchs will rain down Tempest fire en masse. With the recent announcement of a FAQ schedule by GW, we will all be stuck with them for a few months – so be ready.

Now we’ve seen the problem – next time we will talk about how to tame the Dark Reaper menace.

~ How would you deal with the Eldar’s new favorite unit?

Author: Larry Vela
Dad, Gamer, Publisher, Pilot, Texan. All games all the time since junior-high. I started BoLS Interactive in 2006. I’m a lifelong tabletop & RPG gaming enthusiast, and internet publisher working to entertain and inform my readers every day. I've been playing RPGs and Tabletop Games since the 1970s. I'm been playing and covering Warhammer and Warhammer 40K for over 35 years.
Advertisement
Editorials Eldar Rules Tactics Warhammer 40k
Advertisement 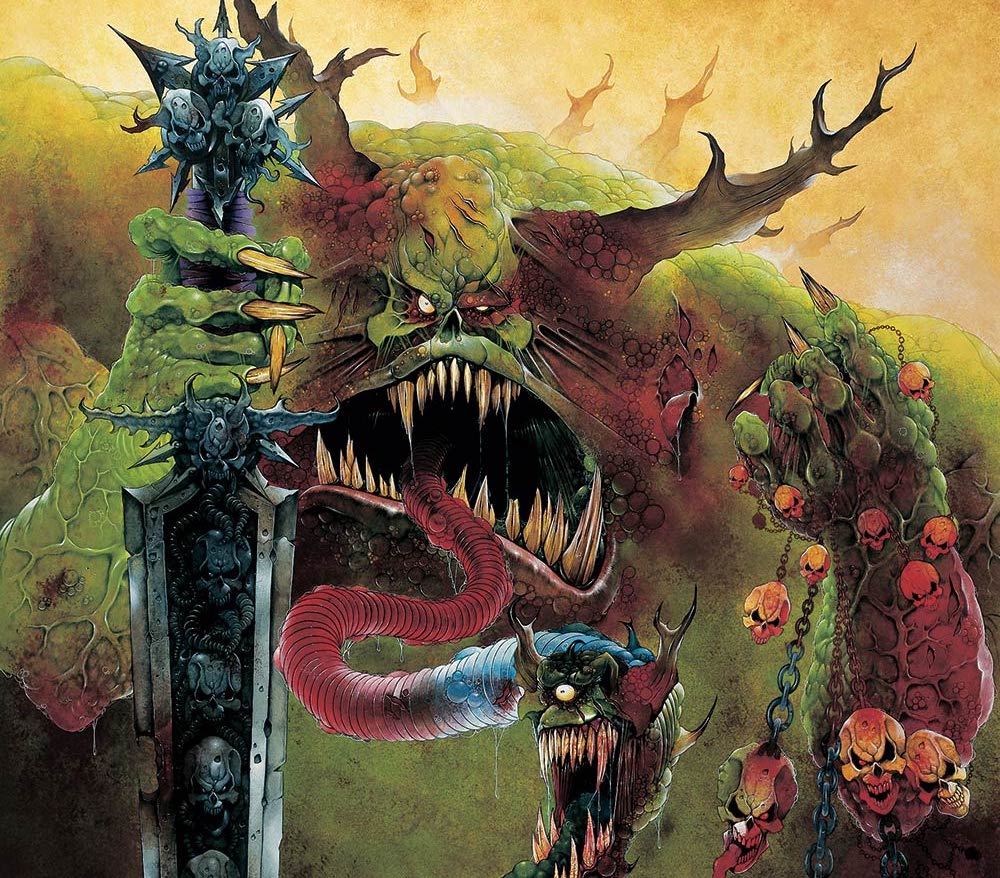