Today on BoLS–a look at the life cycle of a rumor.

Howdy folks, today, we’ve got a look at the life of a rumor. Watch as Leman Russ, or as I like to call him, Lemon Russell is transformed from Primary of the Space Wolves into a fell Daemon of Chaos and back again over the course of a couple of days. 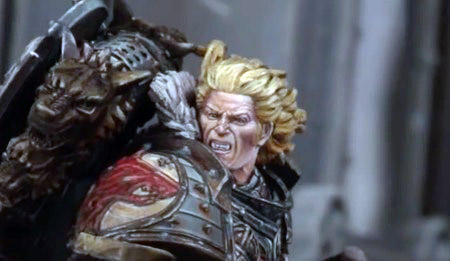 But that’s the life cycle of a rumor: idea, to shared-around piece of news, always with a grain of salt, until the wave-form collapses and it’s either true or it isn’t. The cycle can take longer or shorter, depending on the strength of the rumor. You might remember the supposed leaked images of Lion El’Johnson’s new mini that made the rounds earlier. They turned out to be something else entirely.

So too with the rumors of Lemon Russell becoming one of Khorne’s new friends. This one had some bite to it, after all Khorne is, like Hansel, so hot right now. And Khorne’s friends are always so…outgoing. And this rumor had a datasheet, supposedly leaked, accompanying it. 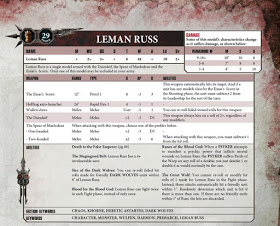 And alongside that, some rumors of corrupted wulfen, fighting daemon legions for so long they got tainted by Chaos:

The Dark Wolves and Leman Russ are a new faction of corrupted Khornate Wulfen. This is taken from that codex.
Other units include corrupted Wulfen Contemptor, Wulfen as infantry units, smaller wolf beasts which are scouts and much larger, mutated Wulf en which are similar in size to obliterators. They’re like their terminators in the elite slot in units of 3 but without armour and bearing massive claws.
The backstory with Khorne is based on them fighting Khornate legions I’m the eye for so long and they eat them and get corrupted by the blood which has been hexed to poison them. Russ has to make a deal with Khorne to fight for them or they die. If they go too long without combat they lose wounds and this is reflected in gameplay, if they go a turn without combat they start to turn on each other and this replaces their morale mechanic. (a bit like Orks). However, if they kill one of their unit the rest of the unit get a buff.

But, this mighty daemon primarch was slain with a few short words:

And just like that, Chaos has lost a Champion. I’m still holding out hope that Mr. Russell adds his lemony flavor to the game–it would be kinda cool to see that this is in fact “the Wolf Time.” But only time, and possibly leaked images, can tell.