The Blood Angels are back and we’ve got our list of our favorite stratagems from their new codex – check these out!

Enemies of Mankind will be quaking in their boots when the Blood Angels arrive as they have some pretty mean stratagems that will undoubtedly aid in their conquest. Some of these we picked just because they are pretty bonkers in terms of game play. Some of these we picked because we loved the themes they represented. So let’s descend like the Blood Angels and dive in! 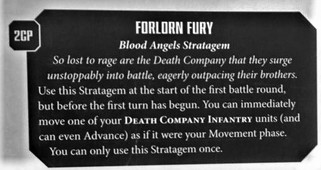 We’ve showed this one off before – but it’s too good not to show off again! This stratagem singlehandedly makes the case for Death Company in your army. Death Company with Jump Packs are going to have the ability to move and advance before the game starts – and then on the first turn, move and assault. That’s at MINIMUM 25″ of movement BEFORE they roll their 2D6 charge roll. That’s scary good. 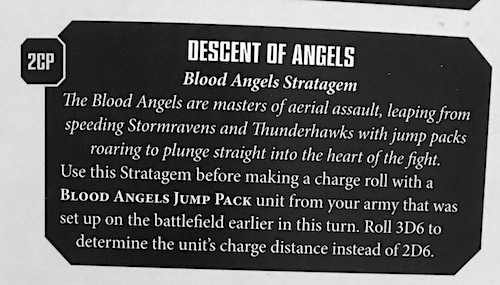 Oh hey – look at that! Another stratagem that allows Blood Angels Jump Pack units to get EXTRA movement – this time for a charge roll. It’s almost like Games Workshop thinks these guys want to get into combat really quickly or something. This stratagem is a blatantly obvious combo with the above stratagems and with more below…

Blood Angel Characters are known to be pretty deadly in Close Combat. There is a certain Chief Librarian who could really use some extra attacks – just ’cause. When you combine this with another psychic power that he will have access to, The Lord of Death will have an extra 2D3 attacks. Alternatively, Librarian Dreadnoughts are ALSO characters. And Psykers. And Dreadnoughts. I think you know where we’re going with this.

Strike of the Archangels

This one is for all you fans of Terminator Armor – no matter the version! On the turn they setup (typically from Deepstrike) they can re-roll failed hit rolls until the start of your next turn. Keep in mind that applies to shooting, close combat, AND Overwatch! A big block of shooty Terminators might be the right call with this one. Then again, if they happen to be the assaulty version and they pull of a charge…ouch!

Upon Wings of Fire 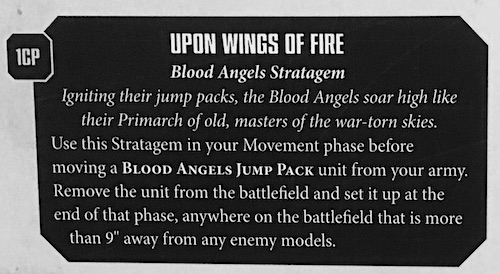 Did your Death Company kill their target? Is their next one on the other side of the board? Good thing there is a stratagem for that! Rapidly re-deploy your Jump Pack squads (looking at Sanguinary Guard, too) and get them in the thick of the fighting! If only there was a stratagem that helped to ensure they got a bonus to their charge distance…(hint: scroll up). 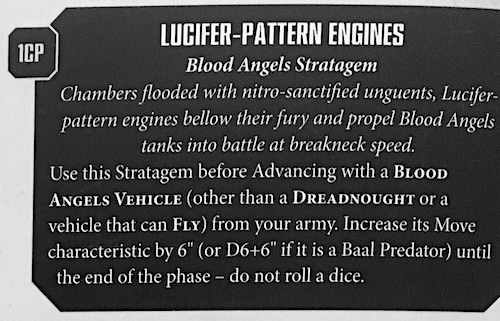 Sometimes, you just need to get where you need to go – and the Blood Angels are PROS at this.

That’s it for our Favorite Stratagems from the Blood Angels – did you have a favorite?