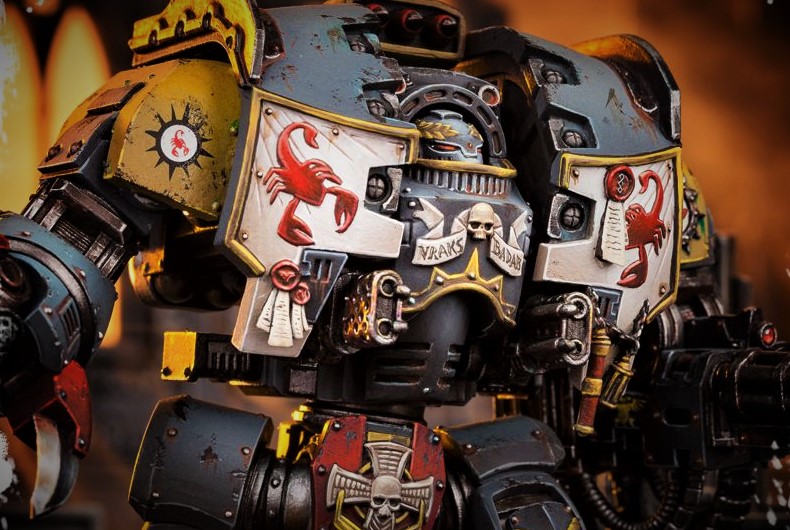 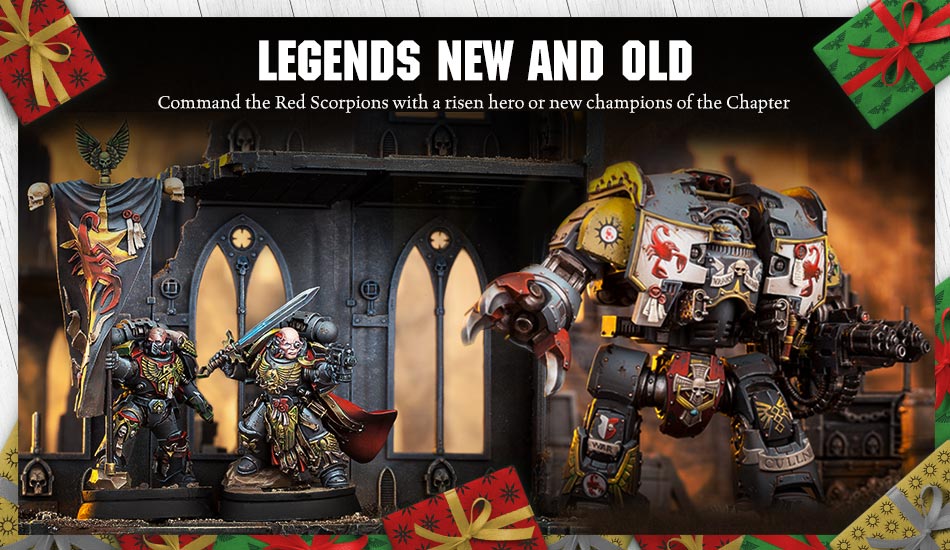 New kits from Forge World are up for Pre-Order this weekend – the Red Scorpions have arrived!

After months of teasers and previews the Red Scorpions are finally getting access to their new kits from Forge World. 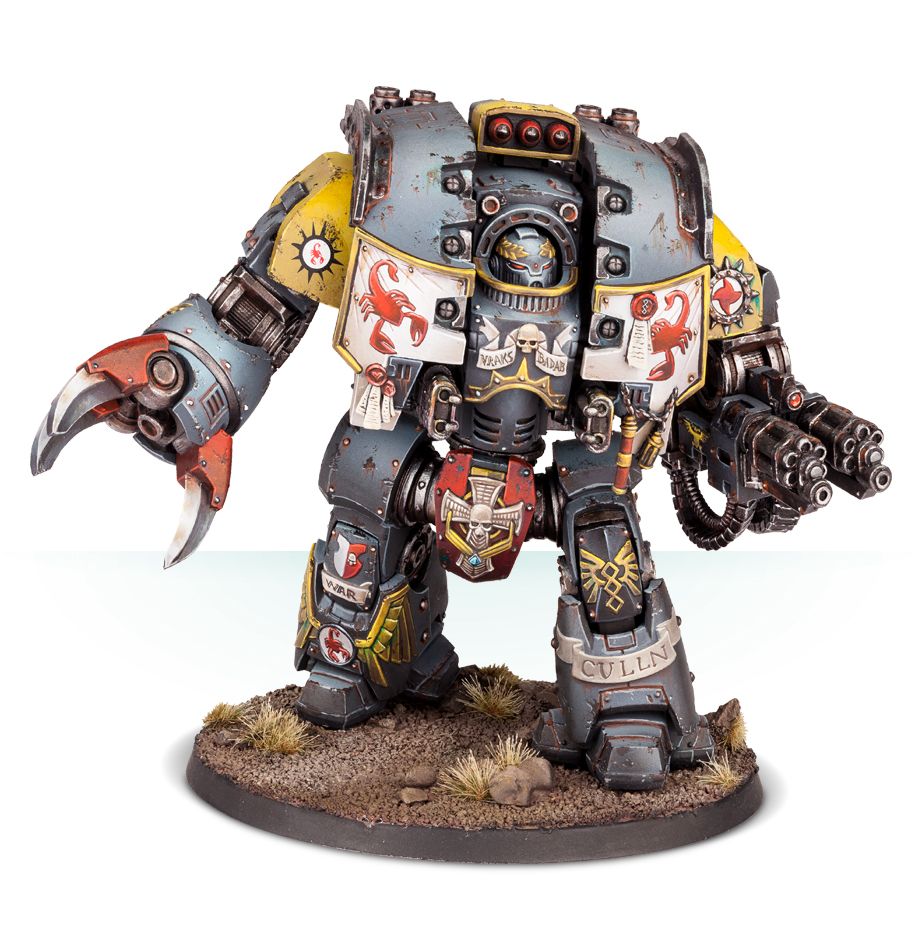 Formerly the Lord High Commander of the Red Scorpions Chapter, Carab Culln was believed lost to the Imperium in the campaigns that followed the Indomitus Crusade. Grievously wounded in the slaying of the Great Beast of Sarum, Culln’s remains were returned to the Chapter, bearing only the faintest whisperings of life. Thus in honour he was interred within the armoured shell of a Relic Leviathan Dreadnought, blessed with the technology to allow Culln to serve his brethren in battle once again. 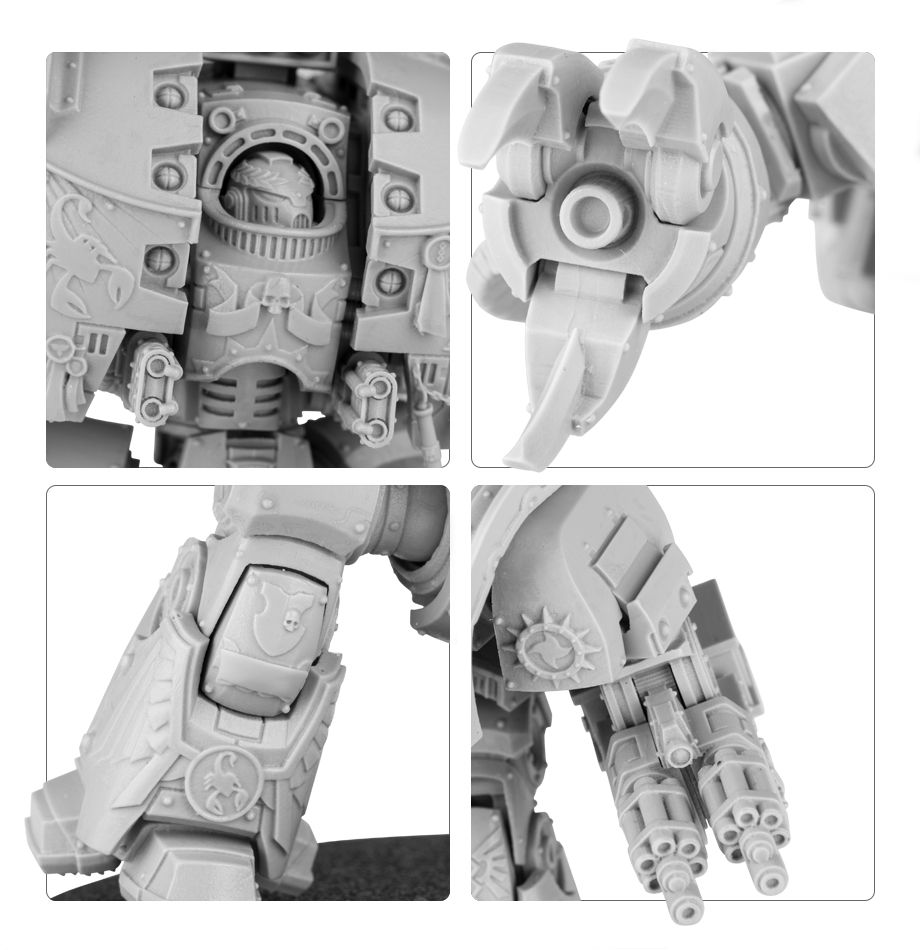 This multi-part resin kit contains the components necessary to assemble Carab Culln the Risen, a Warhammer 40,000 Character Series model. Made up of massive pieces of powerful armour, this is an imposing example of a Relic Leviathan Dreadnought – harsh lines and subtle curves make up the silhouette of this miniature. Designed for total war, Culln is armed with 2 assault cannon on one arm, and a heavy bolter hand surrounded by brutally sharp blades on the other – all topped off with hunter-killer missiles. The model is supplied with an 80mm round base.

Rules for Carab Culln the Risen are available HERE. 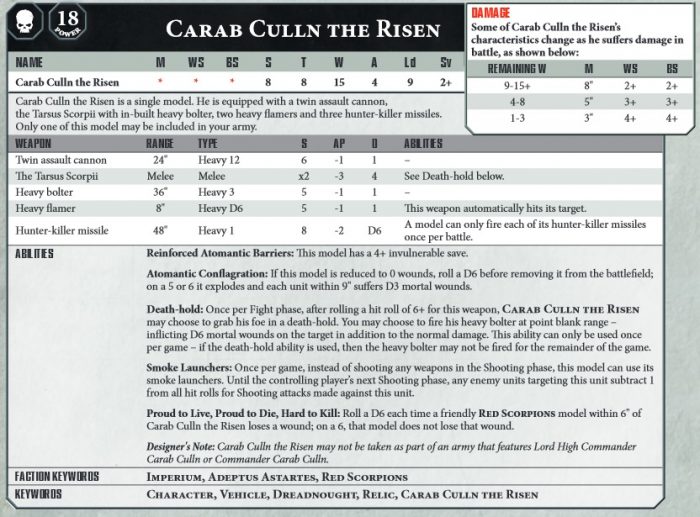 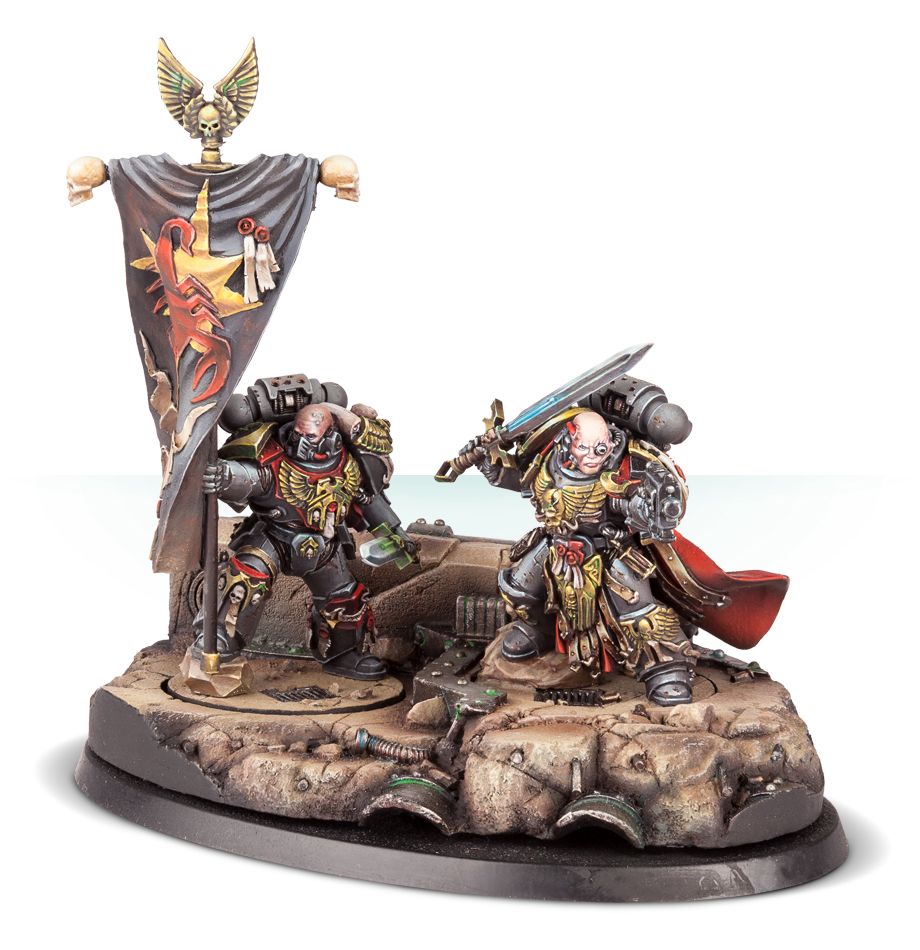 Casan Sabius is renowned among the Red Scorpions as a formidable strategist and swordsman, and when Lord High Commander Culln fell in combat against the Great Beast of Sarum, it was he who the Chapter rallied around in that dark hour. Sabius took command of the Chapter fleet, enacting a flawless strategy of disengagement from the tendrils of Hive Fleet Kraken whilst coordinating a precision orbital bombardment. In doing so he ensured the survival of the Chapter. 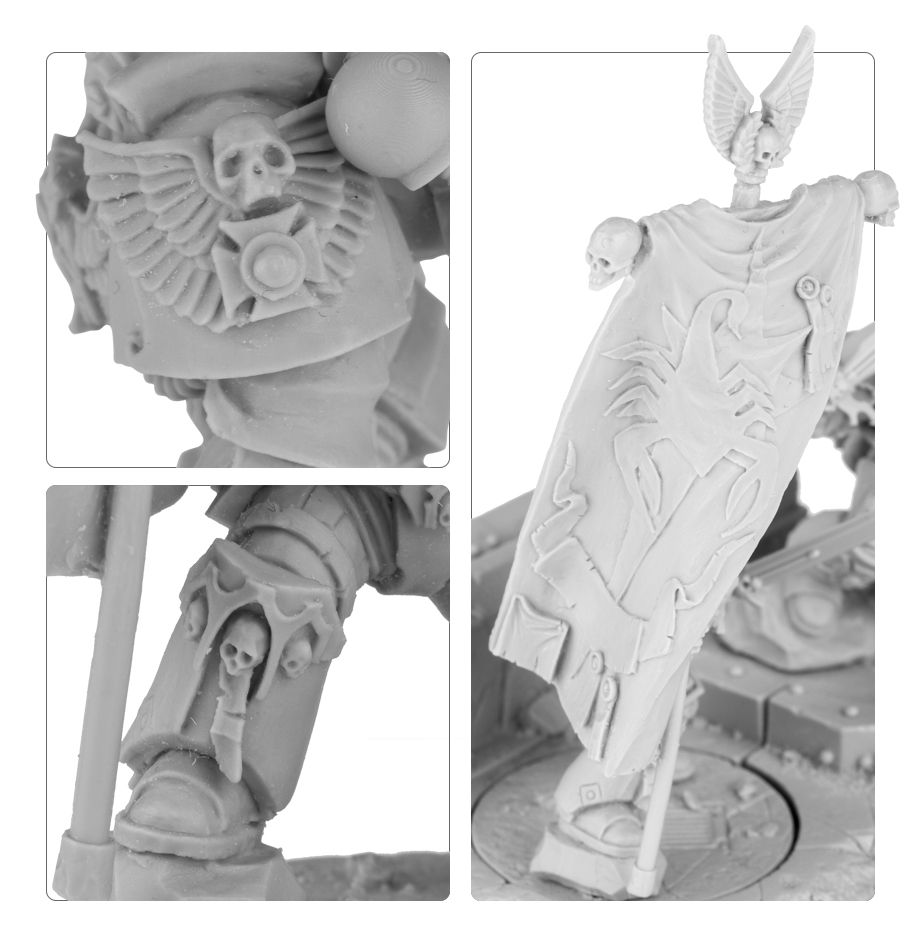 Ancient Sirae Karagon was honoured by Lord High Commander Culln with the sacred charge of the Vexilla Imperialis on Lamarno VII, for defeating and throwing the planet’s Genestealer Cult Patriarch from the peak of its spire-top lair. The Vexilla Imperialis is one of the Red Scorpions’ most precious relics. It is more than just a Chapter Banner; the High Lords of Terra awarded it to the Red Scorpions as a mark of triumph following Commander Culln’s successful pursuit of the Badab campaign. 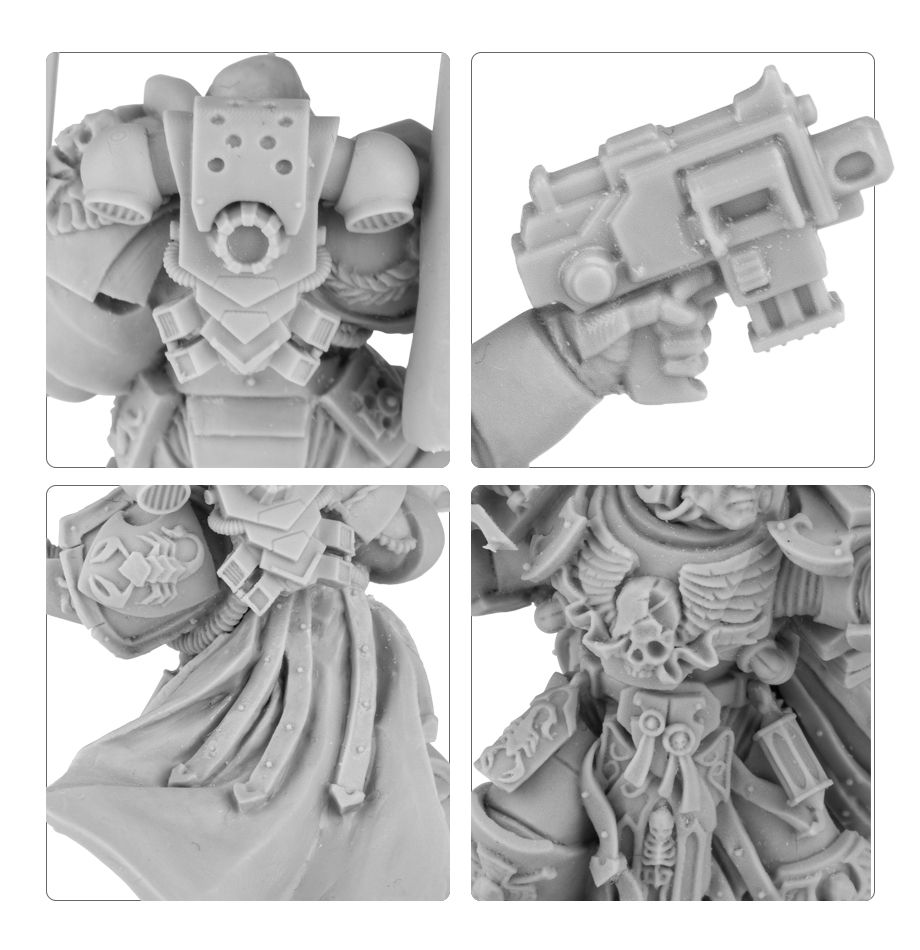 This is a multi-part resin kit which contains the components needed to assemble Casan Sabius and Sirae Karagon. Part of the Warhammer 40,000 Character Series, this is a spectacular centrepiece for your collection, with both models posed dynamically and indeed heroically. Sirae Caragon carries a splendid Vexilla Imperialis, along with a power sword, and Casan Sabius is armed with the Blade of the Scorpion and a bolt pistol. Each model is supplied with a 32mm round gaming base which, when not in action on the tabletop, slots snugly into the 105mm oval display base – this features a rocky diorama.

Rules for Regents of the Ordon Rift are available as a pdf HERE. 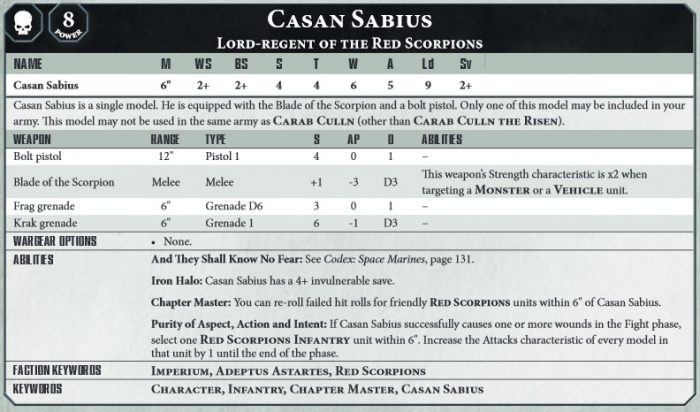 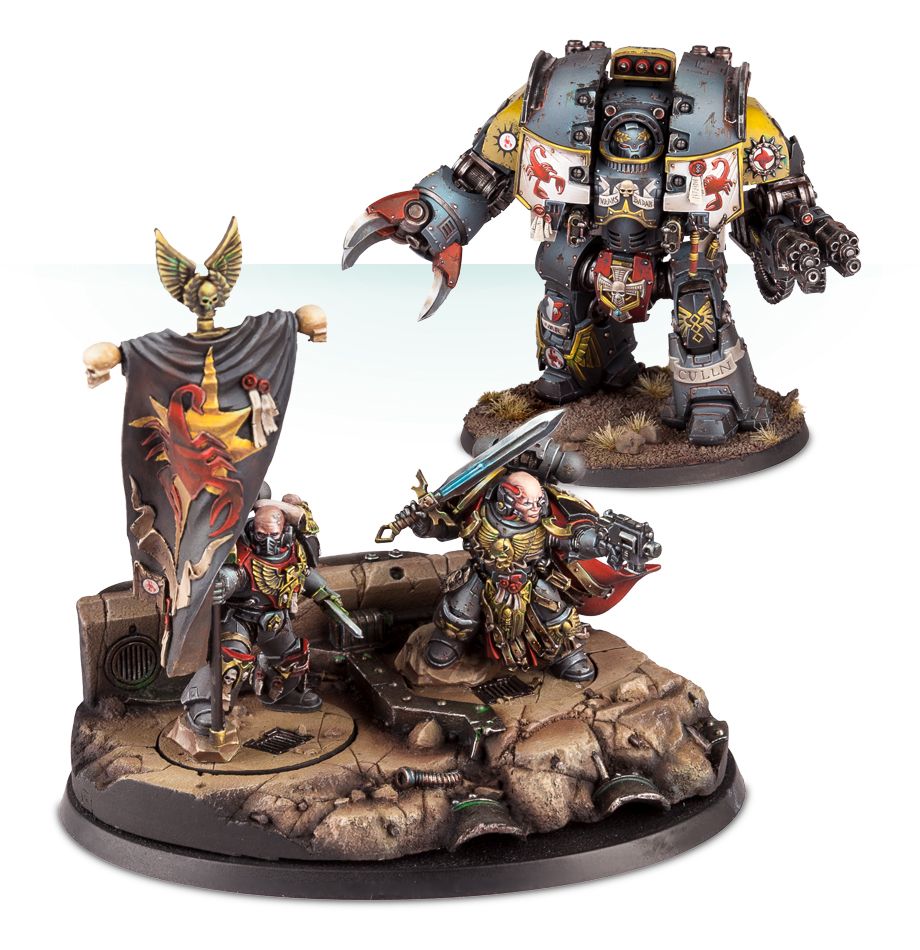 Only in death does duty end…unless you get put in a dreadnought. Then you just keep on keepin’ on.

Dark Apocrypha: Adventure in the Underhive