40K: The Relics of the Blood Angels

The Blood Angels are masters of war and master artisans. Which means their relics better be awesome, right?! Come take a look for yourself!

The Relics of Baal are the six Relics that the Blood Angels have access to. These are great for creating your own “special characters” and unique narratives – but also give you a nice boost in power on the tabletop, too! So let’s dive in with the fury of the Red Thrist!

(Note: Remember, the Warlord Trait Artisan of War does not stack with Relics.)

The Hammer of Baal 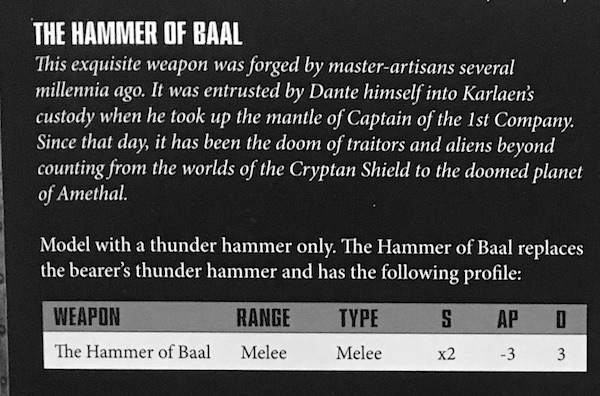 The Hammer of Baal’s biggest advantage is that there is no penalty on your to-hit roll. That’s kind of a big deal! Most of your Characters hit on 2’s or 3’s and with the Red Thrist and a base strength of 4, they are pretty effective “Can-Openers” on the turns they charge. If you’re taking a Thunder Hammer and a different trait than Artisan of War, you might as well rock the Hammer of Baal. 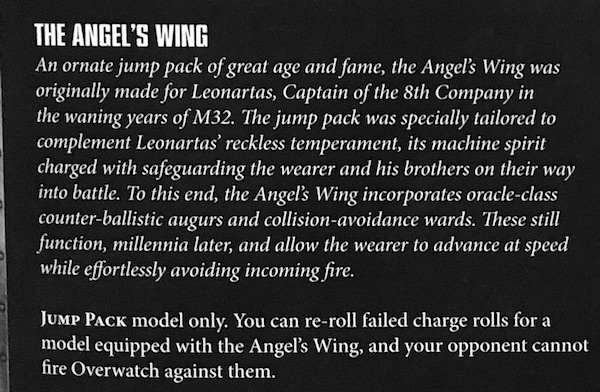 The Angel’s Wing is possibly my favorite relic. Why? Toss this on a Captain, Lt. or Chaplain that you run with your/around your Death Company. Have them Charge FIRST and “absorb” the Overwatch. Then let your Death Company follow-up and smash them at full strength. With no risk of Overwatch, that’s going to be a very bad time for your opponent. 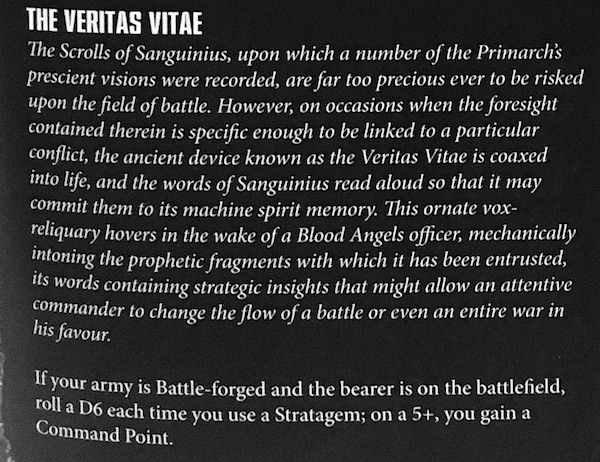 The Veritas Vitae is a 1/3rd chance of getting back a Command Point every time YOU use Stratagem. We’ve seen variations on this theme before and if it also allowed you to roll ever time your opponent used a Stratagem, I’d say it was an auto include. However, it’s only 1 die (not 1 die per point spent) and it’s only on your Stratagems. It’s good, but it’s not OP – which is why it’s a solid option and not “THE ONLY” option.

The Standard of Sacrifice 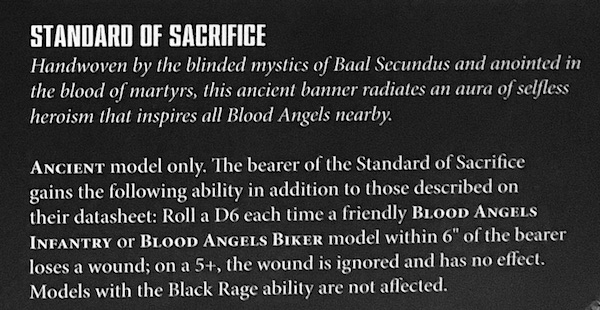 If you’re running an Ancient with a Standard why not slap this one on there, too? A 5+ Feel No Pain roll is always handy. It’s a 6″ range so just keep your Ancient in the thick of things and have him inspire his brothers to push through the pain! 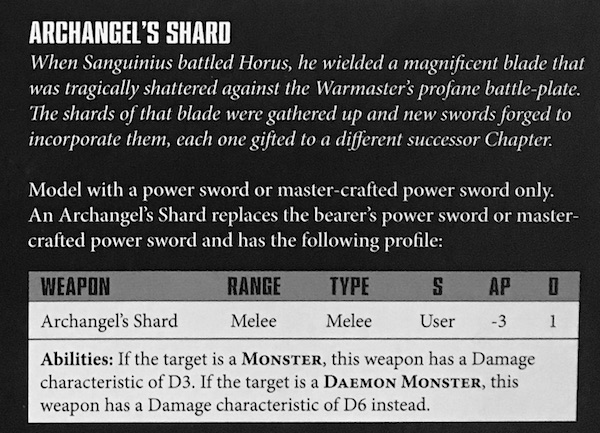 Monsters be ware! Daemon Monsters – RUN! Okay, maybe it’s not that scary for Monsters/Daemon Monsters because it’s still Strength User and in most cases that’s going to be a 4. Just remember that Red Thirst gives them +1 to WOUND. With AP -3 and D3 or D6 damage coming at you…just keep a note of where they are at on the battlefield. 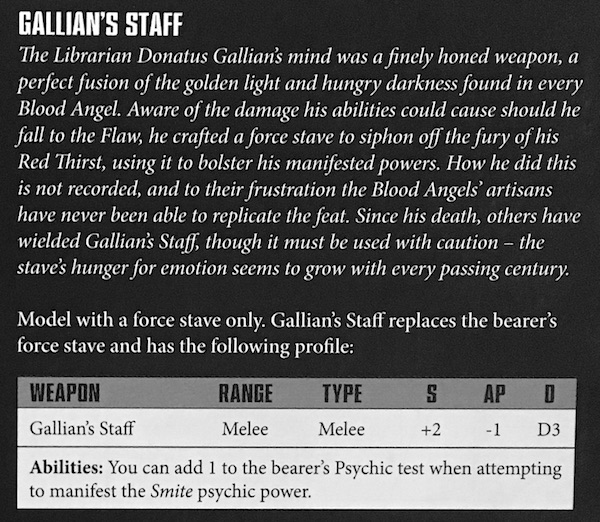 Everyone loves Smite, right?! Why not get a bonus +1 to cast it. Gallian’s Staff isn’t terrible as it’s a boost to Close Combat, but looking at the options vs this one…It’s low on my priority list. Now, if was +1 to manifesting Psych Powers in general, then I’d be more excited about it.

If I had to do a quick power ranking, it would probably look something like this:

That’s just based on my personal preference and Army Build for the Blood Angels. I would rank Veritas Vitae over Angel’s Wing if I wasn’t planning on Deepstriking a Character to support my Death Company. Heck, if you aren’t running a ton of Death Company things like the Standard of Sacrifice also jump up on the list. Anyhow, YMMV!

What do you think of the Relics of Baal? Do you have a favorite – what about your own power rankings? 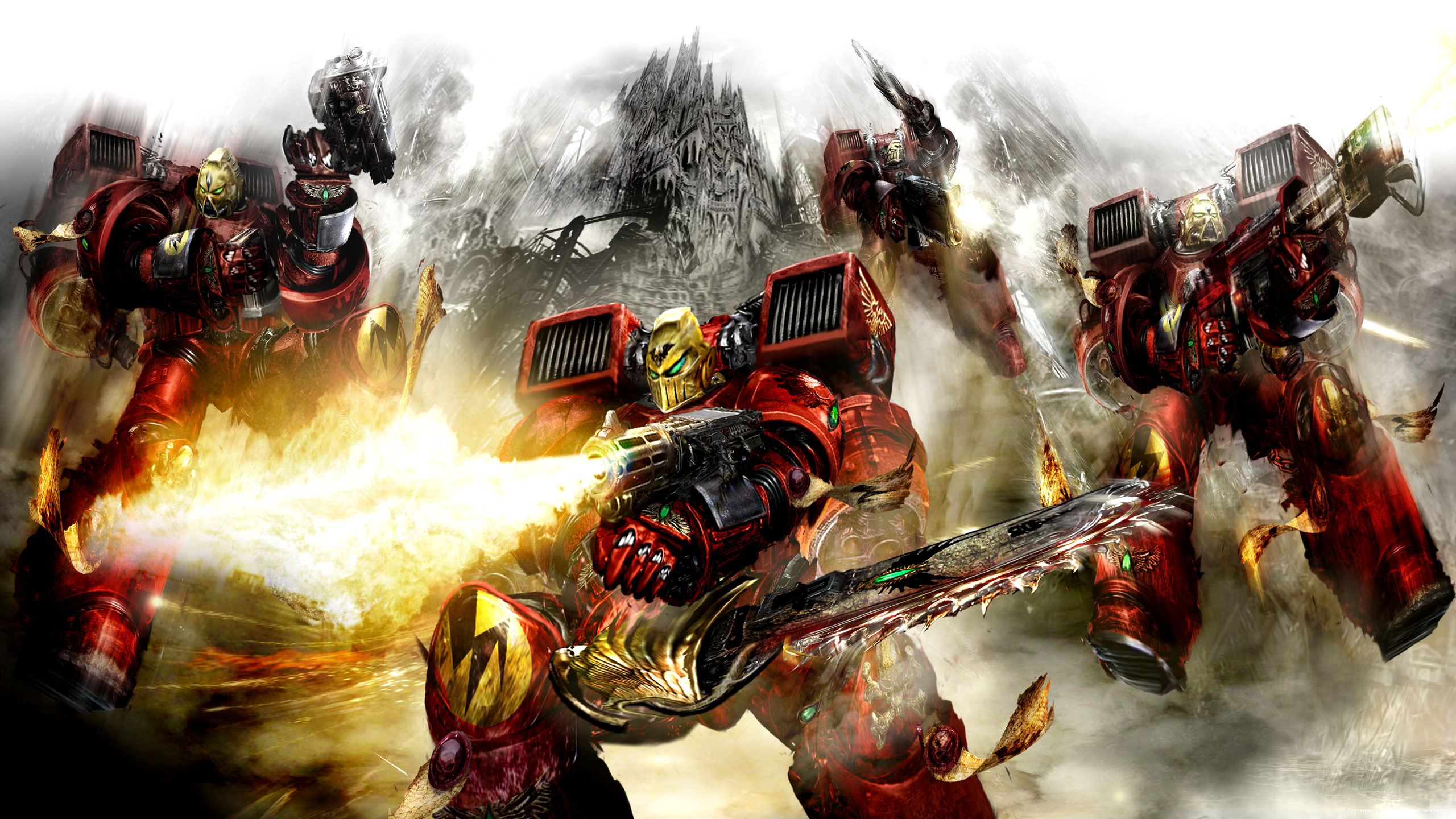