The Dark Angels are roaring with stratagems – Come check out our top 5 favorites!

We’ve been putting the Dark Angel’s Codex through it’s paces on our Twitch channel this week. We’ve also covered their Warlord Traits and their Psychic Powers. The Dark Angels have 25 Stratagems to chew through and you can check those out as well, but we’re distilling them down to our 5 favorites for easy reference. Let’s dive in:

Weapons From the Dark Age 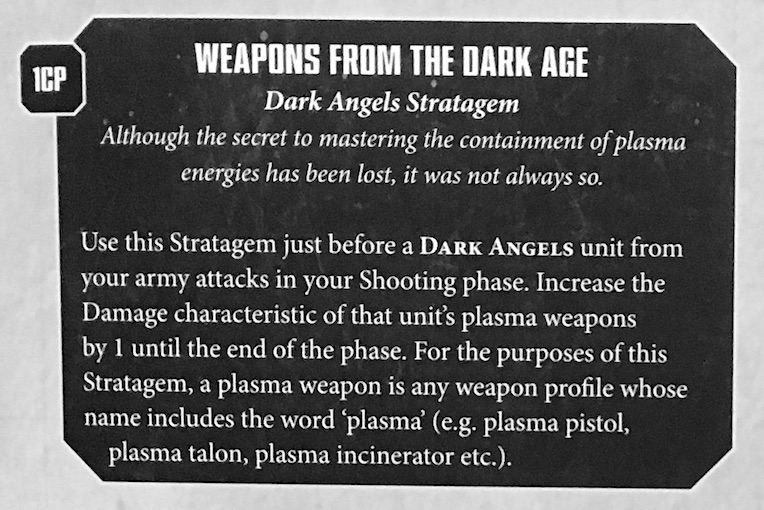 Who loves Plasma!? “Vampires!” Wait…wrong type of plasma there guys. I’m talking about the Dark Angels, of course! This stratagem amps up their Plasma weapons and increases their damage by 1 for the remained of the phase. That’s going to pair very nicely with Hellblasters (which is funny cause their weapons aren’t exactly the old models of plasma, but whatever). Regardless, this is one of our favorite for the Dark Angels and folks are going to want to know they are carrying it in their playbook!

Speed of the Raven

Ravenwing want to Advance for their special Jink rule. When they do advance, they get a lovely +4 invulnerable save. And when they Advance, they can’t fire non assault weapons…but now they can! Speed of the Raven allows them to fire and also charge in the same turn when they Advance. Note: The Jink save is only vs shooting attacks (so no 4+ invulnerable in Close Combat).

This does open up a question about bypassing the Advancing/shooting restrictions. Oddly enough, from our interpretation, Heavy Weapons and Assault Weapons still have a -1 to hit rolls, but Rapid Fire weapons do not. That’s going to be great for Ravenwing Bikers! 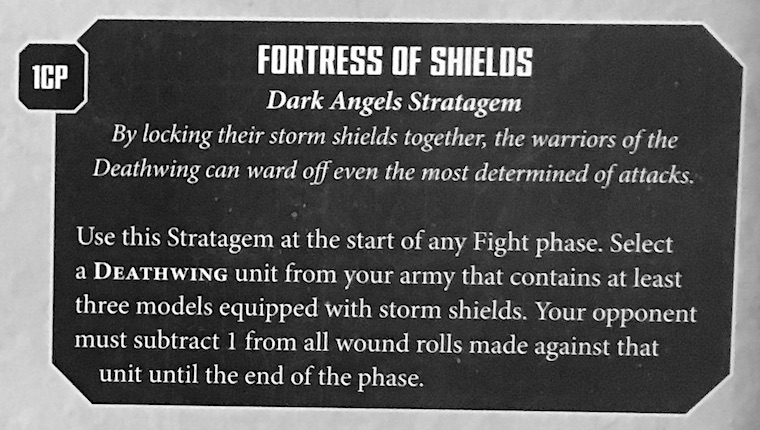 Time to make those Deathwing Terminators EVEN TOUGHER to kill. This is better than increasing their toughness by 1, this reduces opponent’s to-wound rolls by 1! The down side is that it only applies during the Fight phase – otherwise this thing could break entire turns of shooting. 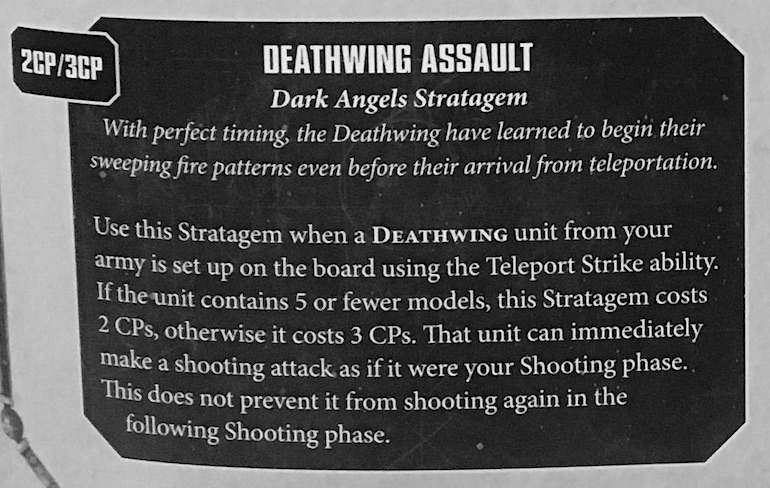 Deathwing Terminators can pack a punch with the ranged firepower – depending on how you load the up – so why not take an extra round of shooting with them! I like this ability to get a “double tap” with their guns. It’s expensive, but it’s a withering hail of firepower with the right unit.

They might not be Ultramarines, but they can (almost) be as cool with this 2 CP stratagem! It’s expensive, sure, but it can save the day. Falling back and still getting to shoot can be incredibly powerful when used on the right unit. Think about it – that Deathwing Terminator squad that you just dropped in is a “shooty” build so the opponent thinks “oh I’ll just assault them with my speed bump unit and prevent them from shooting me all game.” But now those shooty Terminators can fall back and use their more effective shooting to clear that out (that’s provided they don’t just Power Fist their way out first).

Bonus: Lion and the Wolf 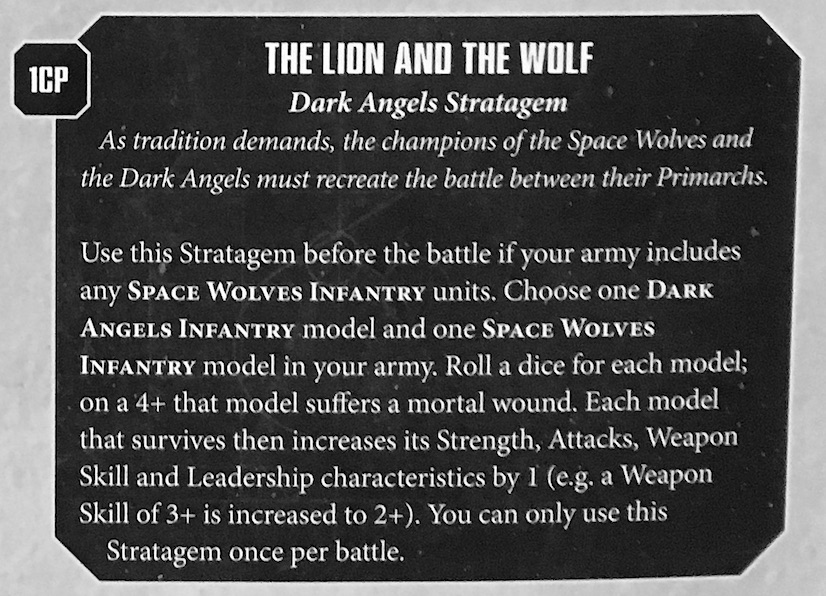 Oh man. This Stratagem…We had to include it in our list because it’s probably one of the most flavorful stratagems ever written. However, it’s also not super likely to get used in competative, matched play. We’d LOVE to see it used in a Narrative/Open environment however. And that’s why it’s our bonus for our favorite Dark Angel Stratagems!

That’s our list of our favorite Dark Angel Stratagems – Do you have a favorite that didn’t make the cut? Let us know in the comments below! 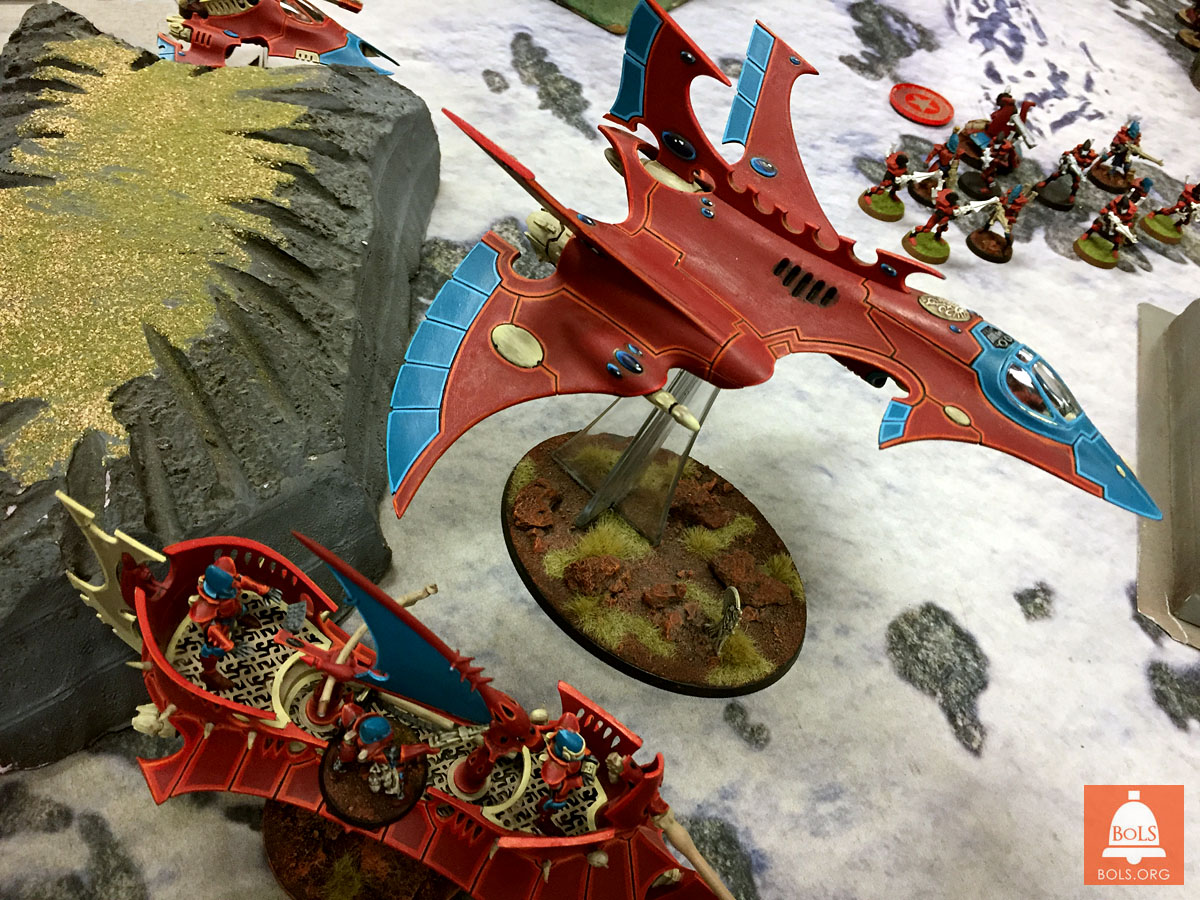