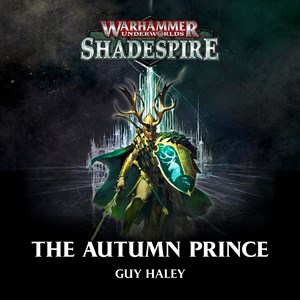 Slip into Shadespire with an elegiac, mournful tale told to you, dear listeners.

Today’s tale is a story of Shadespire. Of immortal elves trapped for eternity in an undying city from which there is no escape. It all sounds very mythical, so, take my advice and never look behind you or eat pomegranates.

An aelven wanderer prince seeks to wrest the secret of cheating death from one of the Katophranes in Shadespire. But why does a nigh-immortal aelf seek power over death?

LISTEN TO IT BECAUSE
Guy Haley relates a haunting elegy showing the universality of suffering and the power of death and the promise of escaping its embrace.

THE STORY
Lured into the cursed city of Shadespire by the promise of the secret of cheating death, the aelf wanderer Prince Maesa seeks the Katophrane Thanaton. Surrounded by the spirits of the dead who cannot die, trapped in the last moments before the city’s destruction, Maesa nears his goal… but just why does a nigh-immortal aelf seek this power over death?

You can practially hear the Theme Song.