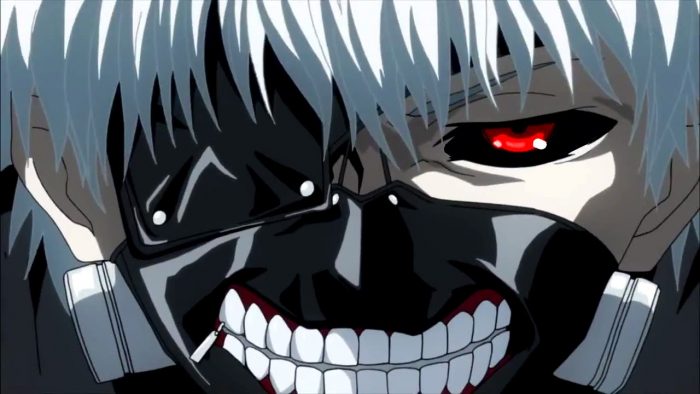 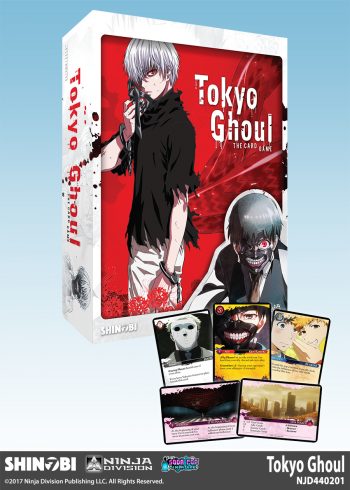 Ninja Division is bringing the world of Tokyo Ghoul to the tabletop with a new deck builder that really flips the format on its head.

Tokyo Ghoul is a deck builder game set in the world of Tokyo Ghoul, a popular manga and anime series.

Players are fighting in a turf war, recruiting allies, attacking enemies and trying to control the most locations. The goal of each player is to control 3 locations or score 10 victory points.  Tokyo Ghoul takes an interesting spin on deck builders, so having a visual is helpful in explaining. So let’s take a look at how to play Tokyo Ghoul: The Card Game. 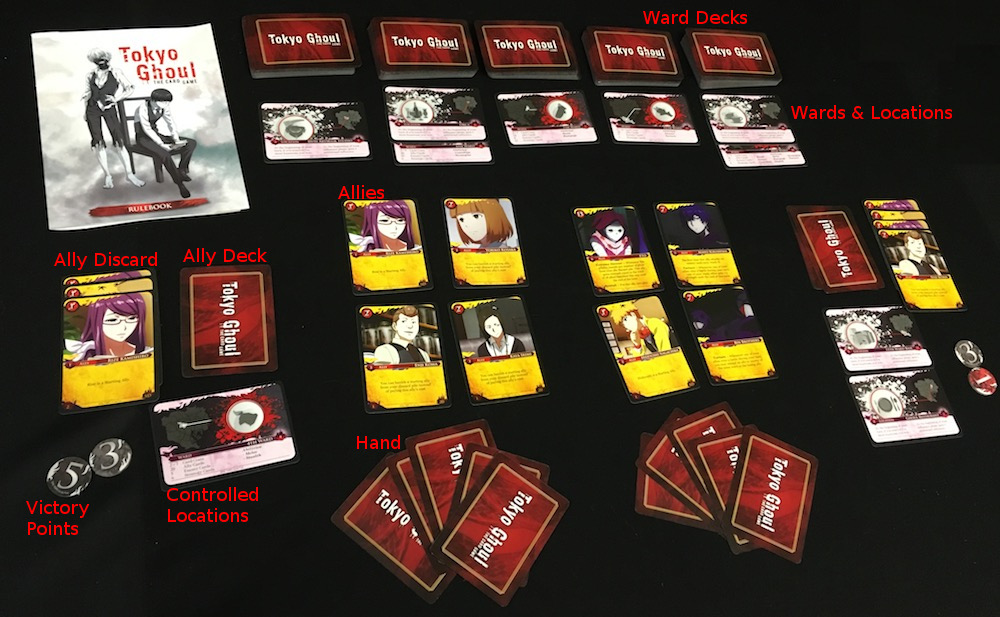 During setup, each player is given an Ally deck containing 8 Standard ally cards and a hand of 5 cards from the Ward 20 deck. At the start of each player’s turn, they draw cards from the Ward Deck of their choice, until they have 5 cards in hand.  Each Ward Deck has different cards and focuses on specific types of cards more than each other Ward.  Then, they flip over cards from their Ally Deck until they have 4 Allies in play. Allies remain in play until they are wounded or some other game effect removes them. They are not discarded at the end of the turn. Each Ally a player has in play grants them a certain number of Influence, which can be used in a variety of ways. 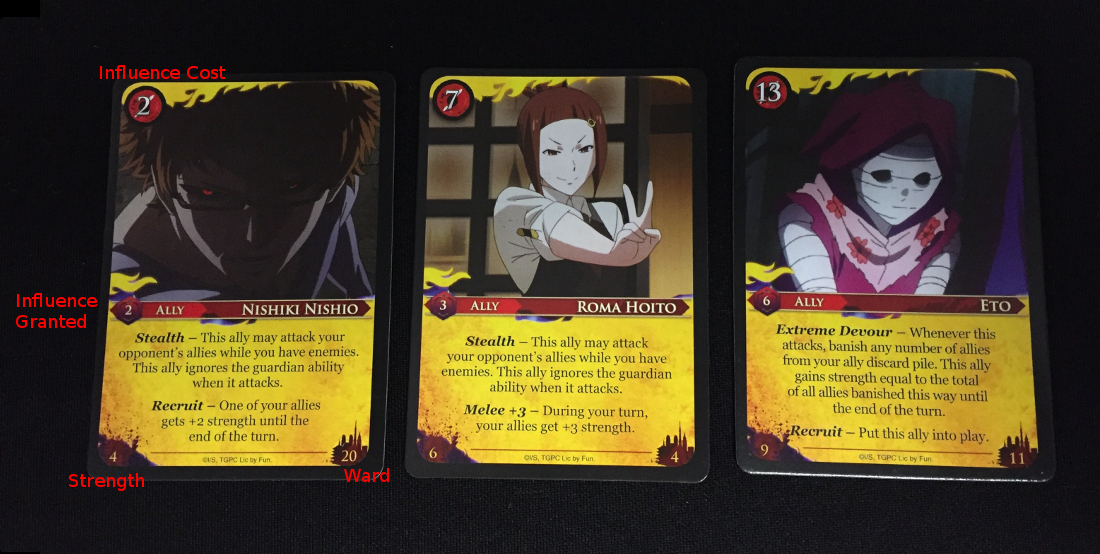 Players can spend Influence to recruit new allies from their hand. Unlike most deck builder games with a shared supply from which to buy new cards, in Tokyo Ghoul players buy new cards from their hand. Newly acquired allies are placed into the Ally Discard, to be drawn later. Influence can also be used to control locations. Each location has a cost which must be spent, in Influence, for a player to gain control of it. When a location is controlled, the player places it next to their Ally Deck, granting them a bonus listed on the location card. A location controlled by another player can be stolen from them by paying the cost. However, it can not be stolen if the player has any allies in play.

After spending Influence, players take actions. Allies in play can perform several actions. Some allies will have special actions printed on them, describing their action ability. Otherwise, players can use their allies to attack other player’s allies. In a simple Strength comparison, the weaker ally becomes wounded and is discarded. At the start of each player’s turn they will gain Victory Points equal to the number of allies they still have in play. So attacking another player’s allies is the best way to prevent that from happening. 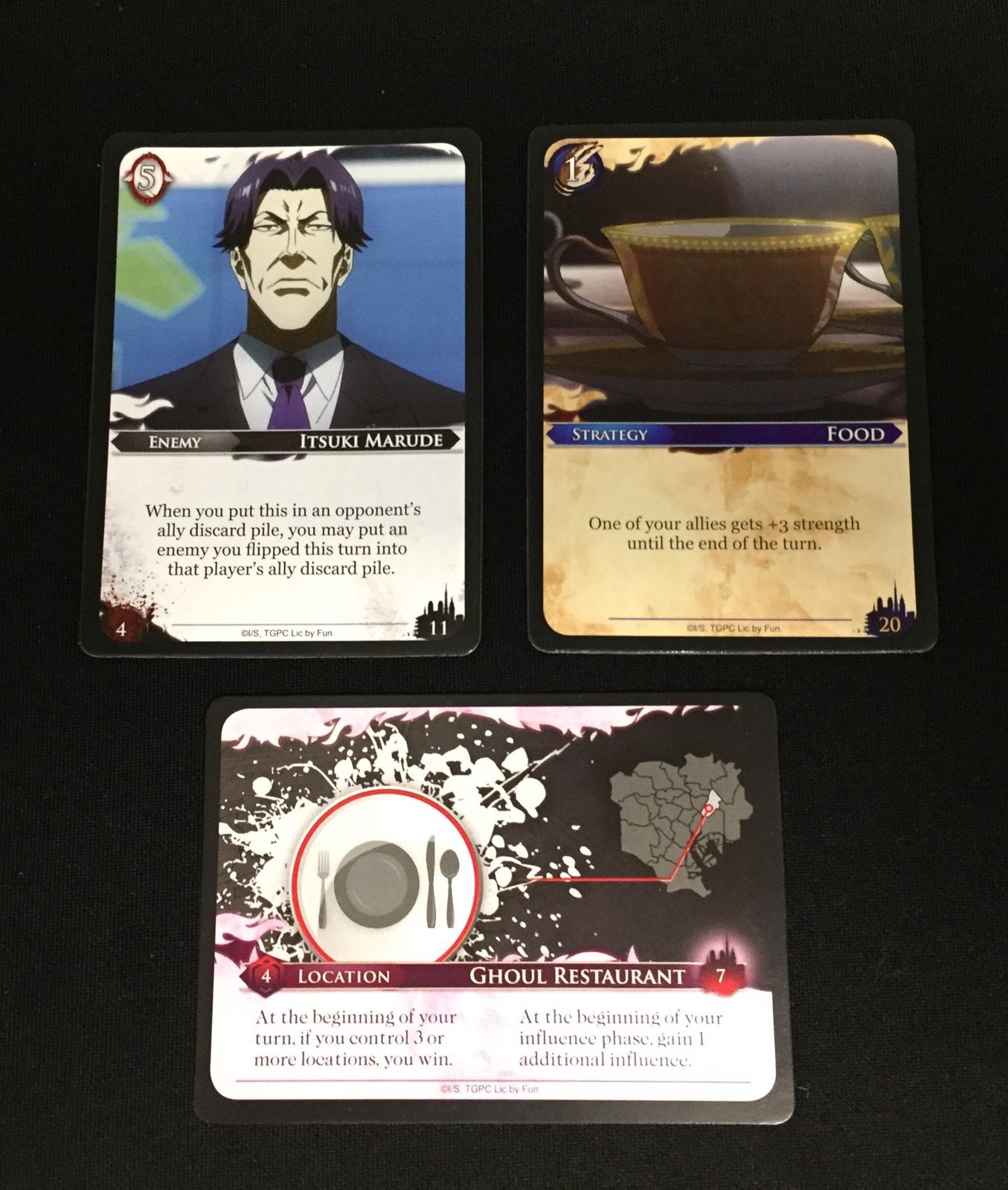 Throughout the game, players will draw Enemy cards. They are initially recruited similar to Allies. However, when recruited they are placed in a chosen opponent’s Ally Discard, to appear later. If a player reveals an Enemy while flipping over from the Ally Deck, the Enemy enters their play area. Before a player can take any other actions, they must attack and defeat the enemy, which removes it from the game. If the player fails to defeat the enemy, it is discarded to the Ally Discard, to return at a later turn.

There are a few other game elements I skipped over here, but that is the core of Tokyo Ghoul. It’s definitely a very interesting take on deck builders.  Reading through the rules was confusing at first, I’ll admit.  But it was my preconceived notions of of how the game was supposed to work taking hold. However, Ninja Division was kind enough to send us a copy of the game, so I was able to run through a few turns to really understand the flow of the game. Once you see each piece moving together, it becomes very easy to follow. I really like the things they’ve done here. I’m always in favor of spinning a well explored game mechanic into a new light. 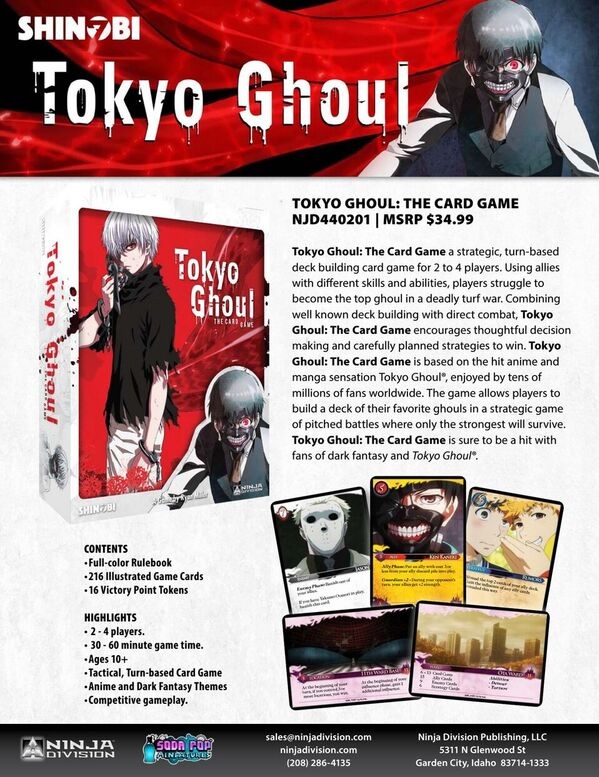 Join us at Twitch.tv/BellOfLostSouls on Dec 19th for a playthrough of Tokyo Ghoul: The Card Game!