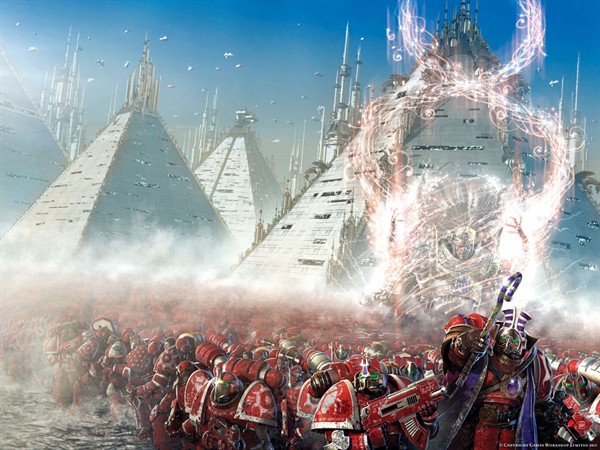 The Fifteenth Legion was formed on Terra, their gene-seed being created and implanted in the first legionaires during a brief resurgence of warp-storms within the boundaries of the Sol system itself. This brief warp-storm was said to have generated psychic flashpoints all across Terra’s globe, resulting in outbreaks of madness, suicide and random violence. Whether it had any effect on the legion’s gene-seed is doubtful, but upon learning of it years later Magnus himself considered it to be a poor omen.

At least part of the initial crop of legionaires – termed student-aspirants – were found amongst the population of the once geo-political entity known as the Achaemenid Empire. This area of Terra had been under the rule of the Emperor for at least a century at this point, and as a result had suffered little during the just-completed Wars of Unification. The Emperor himself, accompanied by a retinue of scientists, visited the region and had each and every family tested for compatibility with the Legion XV gene-seed. Those that were found suitable were taken to the gene-laboratories underneath the Himalayas to begin their transformation into Astartes. Present as one of these first student-aspirants was Ahzek Ahriman and his twin brother, Ohrmuzd. Upon completion of this process the Fifteenth Legion was used to quell what few pockets of isolated resistance to the Emperor’s rule remained upon Terra, before being named the Thousand Sons by the Emperor himself and sent out into the galaxy as part of his Great Crusade. Their name is believed to originate from the first step of the Legion’s creation process; for unknown (but presumably notable, if the Legion was named because of them) reasons, exactly one thousand Marines were created and trained first, with the Fifteenth brought up to full Legion numbers afterwards. There only being one thousand Thousand Sons in existence at a point in time is a fact that, tragically, would repeat itself in the future on more than one occasion… 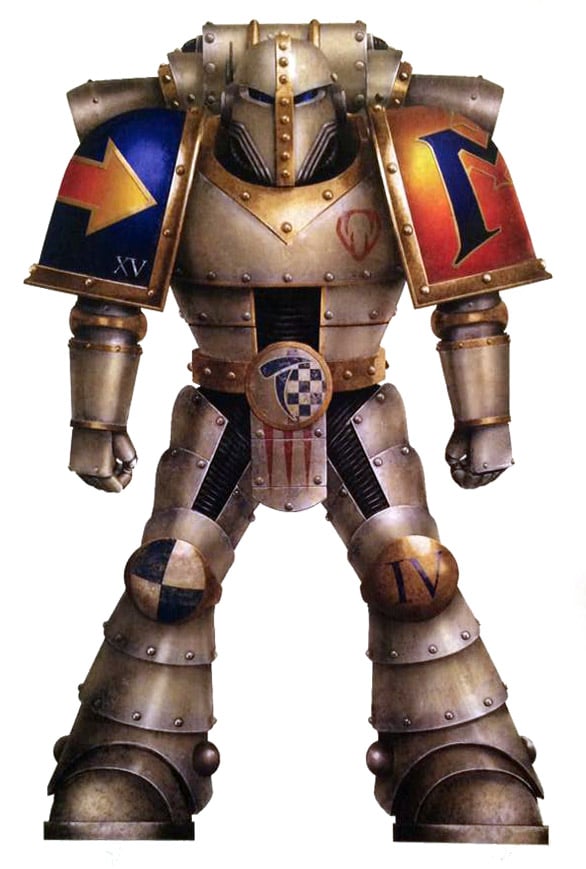 At the beginning of the Crusade, they fought as tenacious and energetic expanders of the Imperium, and were not considered particularly distinct from the main body of the Legiones Astartes. Five years into the Crusade however, the warriors of the legion – much to their delight – all began to spontaneously develop psychic abilities. This development however, was followed by a wave of horrific, unwilling degenerative mutations. This mutative process became referred to as the flesh-change, and was much feared by the Thousand Sons after it first appeared during the Compliance of Bezant. Most of those afflicted were secured in stasischambers in the hope that some future cure would be found for them, and the numbers of active Thousand Sons began to dwindle as a result.

Over the next several decades some of the then-discovered primarchs found the notion of psychic mutants being allowed to exist as part of the Emperor’s Crusade distasteful at best and downright impossible at worst and began to variously move for their censure or spread rumours and condemnations about them. Chief amongst these detractors were Mortarion, Rogal Dorn and Corax. As the years passed, more and more of the Thousand Sons devolved into mutantcy, while those that survived grew stronger and stronger in the use of their powers. Meanwhile, the detractors had managed to raise enough voices to empower a proposal that the Fifteenth Legion be dispanded and expunged from Imperial records altogether.

It was shortly after this that the Great Crusade arrived at Prospero and found Magnus, primarch of the Thousand Sons. The entire legion was transported to Prospero to meet their gene-sire, and there was much rejoicing even though the flesh-change had become a pandemic within their ranks. After the initial celebrations the Emperor and the main body of his fleet left Prospero, but the Thousand Sons remained behind, the numbers of them degenerating into mutantcy seeming to go completely out of control within a day of the Emperor’s departure. Soon, the entire legion was afflicted. It was at this time that Magnus stepped in to save his gene-sons, enacting a mysterious procedure that was able to stabilise the genetic structure of the least-effected legionaires. At the end of the procedure, barely a thousand of the Thousand Sons lived

With this stabilisation of the gene-seed, the Fifteenth Legion got its second chance. Recruiting from Prospero, they were able to rebuild their numbers – though would never become numerous – and return to the Great Crusade, this time led by their primarch.

While most details of how the Thousand Sons were organised before the coming of Magnus is not currently known, it is recorded that they were not considered particularly different from a typical Legiones Astartes apart from their psychic abilities (which resulted in the legion possessing the most powerful Librarians of the era). When Magnus took command, his directions (influenced by his development on Prospero, as well as Prosperine culture itself) would cause some organisational and hierarchial changes within the legion. Chapters were referred to as Fellowships within the Thousand Sons and the most of these the rebuilt legion was ever able to field numbered 10. However, at the conclusion of one particularly bloody campaign, the Thousand Sons had lost almost 900 Astartes, effectively wiping out an entire Fellowship. Rather than rebuild it, Magnus decided to reorganise and maintain the legion as one of 9 Fellowships, an organisation he referred to as the Pesedjet. Two special units were created within the legion; the elite Scarab OccultTerminators and the Hidden Ones of the Scout Auxillia. The legion’s command structure was adapted to include Prosperine philosphy in the form of the Rehati (the coven of Magnus), a second command-track in which the legion’s senior officers were ranked according to psychic ability and influenc

The resurgent Thousand Sons brought their fair share of worlds into compliance with the Imperium of Man, and as such their main method of victory (diplomatic guile and trickery) was not questioned by the body Imperial. However, as the Crusade entered wilder regions of space, more and more hostile forces were encountered that deployed powers similar to those that the psychic warriors of the Thousand Sons wielded. This event, alongwith the ever-present rumours of ‘withcraft’ and ‘sorcery’ surroundng the legion, resulted in Mortarion once more raising his voice in condemnation of the Thousand Sons. This time he was joined by Leman Russ, whose long-held distrust of the legion came to a head after he witnessed the return of the flesh-change in the Thousand Sons during a joint action on the world of Shrike. It was decided that Magnus and his legion would be called to account, and the whole matter of Astartes employing psychic powers at all would be ruled upon. This event was known as the Council of Nikea, and at it – after much deliberation – the Emperor announced that no Astartes must ever again employ the use of psychic powers, upon pain of destruction visited upon them by the Emperor himself.

Stunned, the Thousand Sons effectively withdrew from the Crusade, returning to Prospero. It was during the period that followed that Magnus discerned the approach of the Horus Heresy and employed both his own powers and that of his senior legionaires to try to save his brother’s soul. Failing, he once again marshalled the powers available to him and attempted to psychically warn the Emperor of his favourite son’s betrayal. News of this sanction fleet, meanwhile, had previously reached the ears of the now-corrupted Horus himself. Sensing an opportunity, the Warmaster contacted Leman Russ, commander of the fleet, during the trip to Prospero. Speaking with his brother, he was able to convince him that “to return Magnus to Terra would be a waste of time and effort”. Horus confirmed to his traitorous council of war that he believed this interjection of his into the Emperor’s own decree would result in Magnus never leaving Prospero alive. This action, which went so catastrophically wrong, would doom the Thousand Sons as, in accord with the Judgement of Nikea, the Emperor visited destruction upon Magnus and the Thousand Sons in the form of Leman Russ and his Space Wolves. 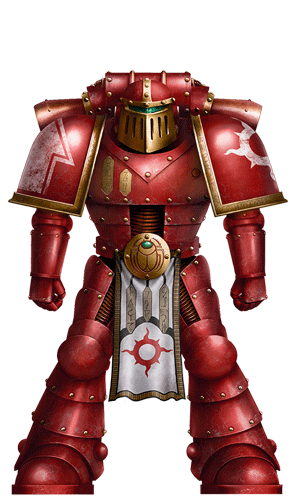 Magnus placed great emphasis on ensuring that legion officers could operate independently from him, going to lengths to ensure they were taught all that he believed they would need to succeed at command, including otherworldly skills. Before the Heresy the individual Thousand Sons squads were led not by established veteran warriors, but by those who showed the most psychic potential. These junior officers were also effectively apprenticed to more experienced officers for cult training. As a result of the emphasis on leaders having strong psychic ability, senior officers of the legion typically became considerably experienced in both typical battlefield combat and in the use of their powers..