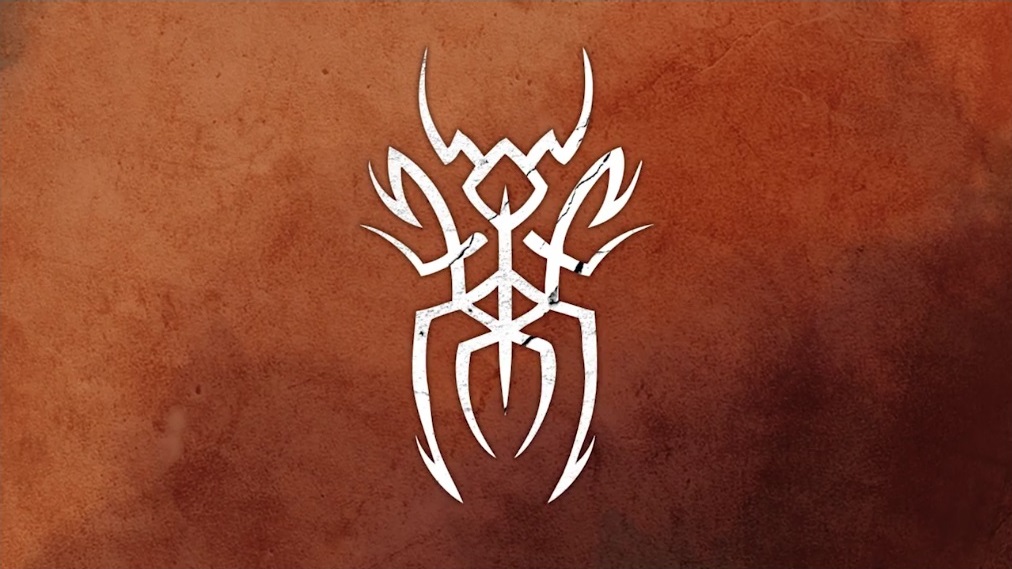 We finally get a better idea of who freaked-out Elias…Say hello to the Shadow Queen!

After the last video had us wondering who had spotted the “spy” Elias, Games Workshop has a new video. Turns out his tormentor has quite a history that is being teased in the latest video from GW:

Watch the video. It’s actually got some really cool visuals that seems to blend a mix of Greek Pottery and Warhammer visuals in a really cool way. Like these Screen-Caps below:

This “Shadow Queen” was apparently a demi-goddess who was “devoured” by but slithered from the Dark Prince’s throat. This queen helped to bring civilization to the mortal realms and “stood first against the corruption of chaos.”

We’ve got some obvious signs and signals to Slaanesh here. But there is more…

We’ve got the Witch Cult of Khaine featured predominately in this next section. But I have a feeling there is more to it than this…

She’s been feeding on offerings of “Blood and Shadow” and sounds like she’s ready to claim her place in the pantheon…and she doesn’t sound happy about anyone denying here any more!

So before we get too far down the rabbit hole, the seems like an interesting blend of Old World Elf Pantheon and AoS Realm Gate lore. Seeing how AoS is built from the ashes of the Old World (quite literally in some lore cases) it’s not too far of a stretch to see how this is connected. But let’s talk about the Elf Pantheon from the Old World first:

The Elven Gods are separated into two groups. The first are the Cadai, who rule the heavens. The Cadai tend to represent productive and fundamental aspects of Elven society such as crafting and smithing, motherhood, farming or hunting. The Cadai are openly worshipped and revered by the High Elves and by the Wood Elves, with large temples and shrines as well as clergy and devotees who publicly profess their faith. The High Elves seem to revere Asuryan, The Creator most highly, while the Wood Elves assign equally high reverence to Kurnous, the Hunter and Isha, The Mother. The Dark Elves seem to mostly ignore the Cadai.

The second group are the Cytharai who rule Mirai (the elven underworld). The High Elves and Wood Elves attempt to appease some of the Cytharai, whilst shunning others. In Ulthuan, small shrines exist and some individuals worship Cytharai privately (depending on the diety in question, this ranges from frowned upon to totally outlawed). However, no formal priesthoods openly worship the underworld gods in Ulthuan or Athel Loren. On the other hand, the Dark Elves openly and proudly worship the Cytharai, primarily Khaine, the Bloody-Handed God.

Mathlann is worshipped by elf mariners from all societies, and Morai-Heg the Crone occupies a unique position between the Cadai and Cytharai.

According to Elven legend, some of these deities are said to walk the mortal world, although sources differ about which ones. Although certainly Ariel and Orion are the living avatars of Isha and Kurnous respectively.

The deities of the Elves are represented by a circular rune pattern called the Pantheonic Mandala. The rune of the most important deity is placed in the center, while the others spiral outwards in order of decreasing importance. Naturally as the various kindreds of Elves use different script, and disagree on the importance of various deities, the Pantheonic Mandala is different for each nation.

Mirai, the Elven underworld, sometimes called the Black Pit, is a dark realm ruled by Ereth Khial the Pale Queen. The door to Mirai (referred to as the Last Door) is guarded by Nethu, who prevents wayward souls from escaping and the living from entering and stealing the secrets of the dead. It is here that Ereth Khial amasses her slave army made from the souls of dead Elves, preparing for Rhana Dhandra.

Rhana Dandra is the elven legend of apocalypse. It is then that all the Gods will have a final battle and Ereth Khial’s army made from the souls of dead Elves will be pitted against Asuryan creations, possibly eating all of the living. In addition the Elven Gods will finally battle the Chaos Gods for the fate of the world, be the outcome good or ill..

However most Elven souls do not find their way to Mirai. Since the Coming of Chaos, Slaanesh the Dark Prince has claimed the souls of the Elven race. Slaanesh desires Elven souls above any others, and will hungrily devour any he can find. Of all the dead Elves throughout history, by far the largest portion have had their souls consumed by ‘She Who Thirsts’, as the Elves refer to Slaanesh. The prospect of this horrible fate terrifies the Elves.

Okay, if you just skimmed over that section there is one name that I’m hoping jumped out at you: Ereth Khial the Pale Queen. She rules over the Elven Underworld aka Mirai, the Realm of Death. Hmm…Interesting, no?

We know that Nagash sits on the Throne of the Land of the Dead now. But if that place is some type of amalgamation of the Old World, it would make a lot of sense that Ereth Khial is still around in some form or another. The End Times alluded to a great many Elves getting Devoured by Slaanesh as well. So who know what GW has planned…

What we DO know is that the Shadow Queen is back…and she’s looking for some revenge!

What do you think of this mysterious Shadow Queen? Could it be Ereth Khial? Or maybe someone else?

Author: Adam Harrison
Writer, Editor, Texas Native, and Austinite for 15+ years, Adam covers all things Tabletop Gaming. Which includes Warhammer 40,000, Age of Sigmar, D&D, Board Games and everything else that involves dice, boards, cards and a table. A hobbyist, player, and collector of miniatures and games, Adam's current obsession are his Death Armies for Age of Sigmar, his Blood Angels and Tyranids for 40k, and his ever growing Arkham Horror: The Card Game Collection.
Advertisement
Age of Sigmar Lore Tabletop News Videos Warhammer Fantasy Warhammer TV
Advertisement