This one is for all you Faithful Dead players out there, get ready to stock-up on the corpses because you’re going to need them. Death is getting a new Summonable keyword and it’s going to be making it’s presence felt. 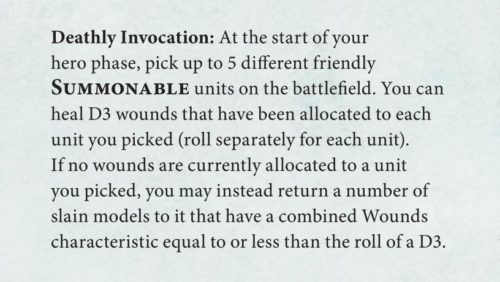 Now, this is Nagash’s version of Deathly Invocation. Not all the heroes of Death will be able to target 5 units. A Wight King, for example, will only heal two. BUT – it stacks! That’s right folks, apparently, you can target the same unit with this ability as long as it’s from different heroes/characters. Hey, that works for me!

From The Grave – No, Literally!

Death is also getting a new “gravesite” mechanic as well:

Every Legions of Nagash army gets to place four gravesites on the table – two in their territory and two in the enemy’s. Summonable units can be set up to emerge from these gravesites later in the game, and they have a similar effect to Deathly Invocation, healing nearby units. As such, Death armies can control territory on the board more effectively than ever before – after all, the leisurely pace of a 60-strong unit of Zombies doesn’t hurt so much when you bring them onto the board 9″ away from the enemy…

Oh – that’s just mean! Well that just goes to show you how patient Death is or about how important it is to pick your battlefields wisely. It’s one of those two, I’ll let you be the judge. 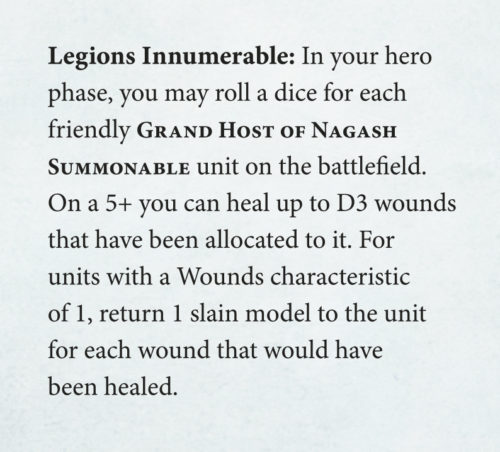 Legions Innumerable is another ability that showcases the unrelenting menace of Death. It represents the preferred method of warfare for the dead – attrition! When you combine this with the above abilities, you have a way to restore 3D3 models a turn to a unit (possibly more). Look, they might not kill you, but they will wear you down and you’ll fall to them. How long can you really outlast death? 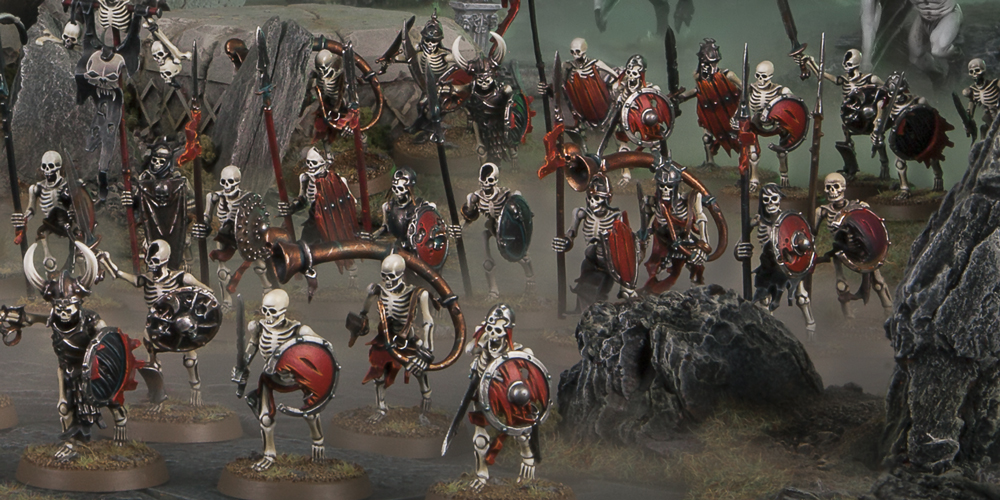 “We ran down the Energizer Bunny.”

If you like Grave Guard, you’re probably going to want to run a Deathrattle force via the Grand Host of Nagash. Firstly, Grave Guard become Battleline for that army. Secondly, it’s got some built in synergy for that unit and with the right combos of Command Traits, Artefacts and Vanhel’s Danse Macabre, and you can pump out 162(!!!) attacks out of a unit of 20 Grave Guard! That’s a LOT of dice! Here’s the math just in case you’re wondering how:

“my calculations here are based on a unit of 20 all getting their attacks – not implausible thanks to their small base size! The unit has 2 attacks base, plus one for the champion. This is then increased by 2 by the Wight King and the Lord of Nagashizzar ability. This brings the unit up to 81 attacks – which, attacking again with Vanhels would give you 162 attacks. WOW.”

Crown of the Dead

No only will Undeathly minions be able to regain the fallen and pump out the attacks, they can also ignore your mightiest blows thanks to the Ossific Diadem. You’re really going to need to demolish a unit completely if you want to have a chance at beating undeath – but that’s going to be even harder with Morghasts floating around: 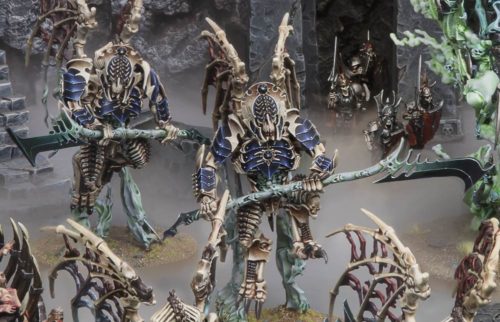 These boney fellows are the Elite of Nagash’s forces. In the Grand Host of Nagash, they each get +1 attack to start. And if you really want to take your army up a peg, run the First Cohort warscroll. Now any wounds that Nagash suffers can be allocated to nearby Morghasts. Have fun chewing through that ball of death!

The forces of the Skeletal Pope rise anew with the Legions of Nagash Battletome – are you ready to fight the Dead!?