The Daughters of Khaine have stepped from the shadows of Hag Narr, and now join Order’s ranks. Take a look at how and why.

Actually that last one’s easy. They just want blood and also to murder you. But in an Orderly fashion.

The Daughters of Khaine are zealots through and through, they’re cast as the sort of dark side to order. Not because they are all about following the laws of the land, but rather because they are builders of cities and temples. They have warrior orders and fanatical cults that are empowered by the depravations and sacrifices they write across the Realms in blood and blades alikei–but there is a dark truth at the heart of it all. But before all that–let’s look at what they are and where they came from.

The Daughters of Khaine are an army of aelven zealots combining the Khainite worship of their kin from the world that was with strange new powers drawn from the Realm of Shadow. The Daughters of Khaine came into being following the capture of Slaanesh. Morathi, having escaped the god’s clutches through magical means, helped weave the enchantment that caught Slaanesh, with Malerion, Teclis and Tyrion – ancient aelven warriors reborn as Gods of this new age – also providing aid. Together, they were able to free the aelven souls within Slaanesh, and each was rewarded with a portion to shape as they wished. Combining powerful magic with the sacrifice of her own blood, Morathi forged a new aelven race, and the Melusai and the Khinerai are the first among them.

So right away we see exactly what kind of change we’re getting here. This is pretty exciting stuff for two reasons. First, hey, there’s some pretty cool lore implication here–we know that Morathi worked with the other famous special characters-turned-gods (probably?) to bind Slaanesh and free the souls within. Fittingly, she reshaped them–but they take after her true form, and belie her true nature: 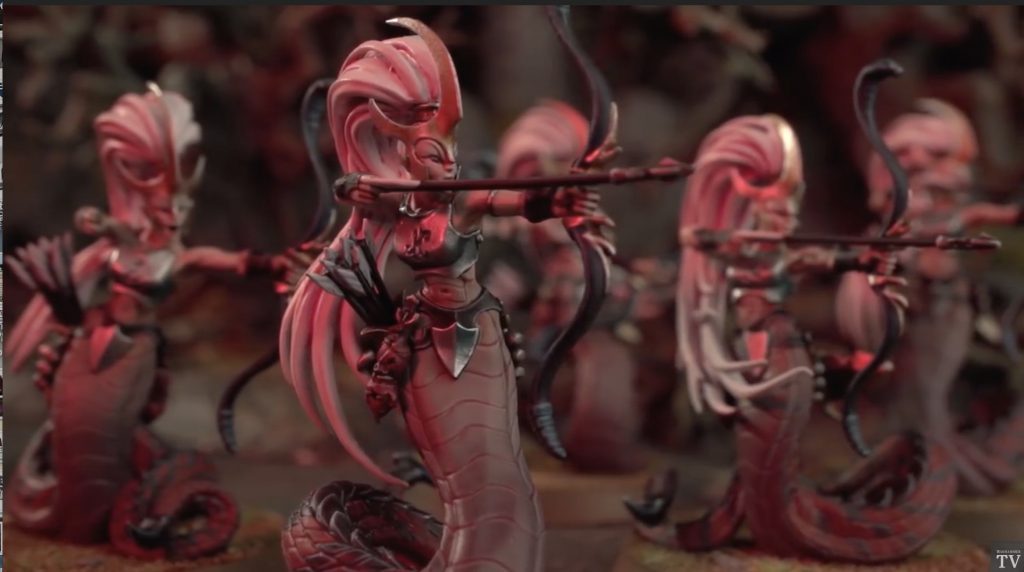 And secondly, the Kharadron Overlords recast the idea of Dwarves. They revamped them and made them into their own thing for Age of Sigmar, and now it seems like these Medusai and Khinerai are going to start to do the same for Dark Elves. Sorry. Dark Aeioulves.

Even if they are very close to their roots of loving to kill everyone and being sadistic. Which again, seems a little wanton for the forces of Order–and GW even admits it’s a very tenuous alliance:

While the Daughters of Khaine crave bloodshed and murder, they serve alongside the forces of Order – albeit tenuously. As builders of cities and civilisations, the Daughters of Khaine have little truck with the rampaging forces of Destruction, while the cold chill of Death holds little appeal to a race brought back from the brink of extinction. As for Chaos, few hate it more than the Khainites, prosecuting their crusades with particular violence against the servants of Slaanesh.

Morathi’s armies are viewed askance by the other inhabitants of Order. Rumours persist of strange, shadowy mutants among their number, and indeed, many find themselves unfortunately slain in the Khainite’s grotesque rituals – whether they come from the Chaos Wastes or are snatched from the streets of the free cities…. As they stand, the Daughters of Khaine are more tolerated than accepted, existing in a shadowy twilight, too useful to cast out.

Now, I know that the authors have very clearly stated that they have little truck with the rampaging forces of Destruction–but when you take into consideration everything we’ve seen so far, it really feels like that’s where they belong. They are Order, perhaps in the loosest sense, but it feels like they’re Order about to fall into Destruction. They hate Chaos more than anything–great–but the way they express everything feels like it belongs in Destruction. They love murder like an Ork loves fighting. Even Morathi, who flips out like a ninja and becomes a murdersnake when you damage her, seems to embody this principle.

And who knows, maybe one day they will make that switch–it feels like that’s what’s in store for these forces. There’s little to mark them as Order. Even their desire to build cities and temples devoted to Khaine is tenuous at best. Because Khaine is dead.

Establishing temples across the Mortal Realms, the Daughters of Khaine scour the Mortal Realms for blood sacrifice – essential for creating more of their number – and the shards of their god, scattered across the Realms. Morathi claims to speak for Khaine, wielding his unbreakable iron heart, but none know that Morathi’s power is a lie, and Khaine is dead; the prayers that her daughters scream and the ritual offerings they make only serve to enhance her own power, not Khaine’s. Indeed, as long as Morathi bears the last vestiges of his power, there is little hope for his revival.

Won’t that be fun when it all comes out. At any rate, let’s take a look at some of the rules of these denizens of darkness duped into thinking they serve Khaine. 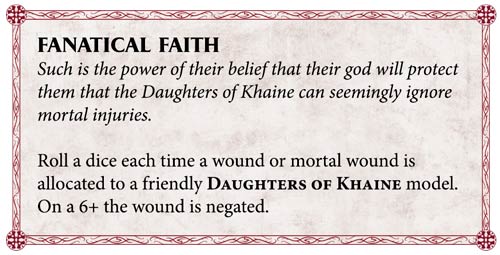 First up there’s Fanatical Faith which gives everyone a feel no pain, which is pretty good, because dark aeiouandsometimesylves are not known for being heavily armored, and these seem lightly armored at best. So have a little bit of survival and hope it goes a long way.

But then there’s their battle trait, Blood Rites. 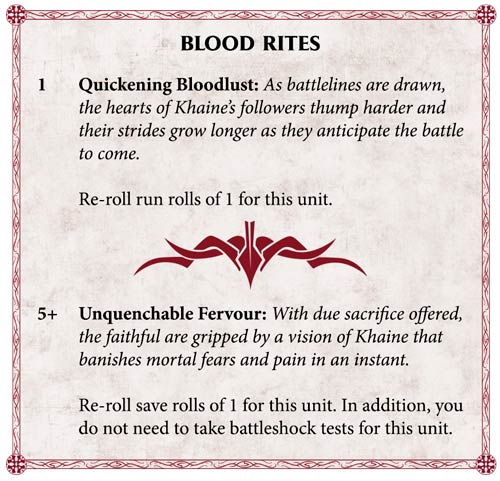 Now this is only part of a chart that definitely has more. Here’s a preview of everything you can expect to find on it (assuming you make it to round 5).

The longer the Daughters of Khaine fight, the deadlier they become, as each benefit is cumulative. Get to round 5 or higher, and your army will be re-rolling 1s to run, charge, hit, wound AND save – and they’ll ignore battleshock to boot! Games against the Daughters of Khaine are going to be particularly thematic, as while you may be able to whittle their forces down, those left are only going to get stronger – and angrier.

So clearly they’re meant to get more and more ferocious as the fighting continues. This feels like an army that will be very dynamic to play–which, I’m all about. I love armies that are fiddly and require finesse to use right, even if I’m terrible with them. It’ll be interesting to see what exactly shakes out over the next week–but here’s where it begins folks.

Check back tomorrow for more on Morathi herself!