AoS: Secrets And Shadows Under the Dread Solstice

The Time of Tribulations is a trying one indeed. If you’ve been following the events of the Dread Solstice global campaign, then you’ll know that throughout the Mortal Realms, leaders have been casting out naysayers, prophets, and foretellers of doom. Finding their constant predictions of death without relief to be less than helpful, they are cut down where they stand.

But this is a time when Death is coming for the Mortal Realms. And in the darkened halls of Shyish, where the unquiet dead toil to the whims of their dread master, Nagash, the souls of the slain prophets whisper their hidden secrets to the cosmos…and the cosmos hungers for more.

Now the power of death waxes in the Mortal Realms, having a lasting, measurable impact on the campaign. Units that lack the Death keyword subtract one from their bravery characteristic, and an additional point of bravery is lost while any enemy unit is within 12″ of a Knight of Shrouds belonging to your army. These Knights of Shrouds are armed with Balefire Blades, allowing them to increase one of their melee weapons’ damage by 1.

Now a new dilemma faces the rulers of the Mortal Realms. With the rise of Lunaghast shall they take this opportunity to avenge wrongs done, now that the secrets are in the open–to find those who learn their hidden secrets and destroy them–or to learn every secret that is being called to the surface by this moon of gloaming dark? 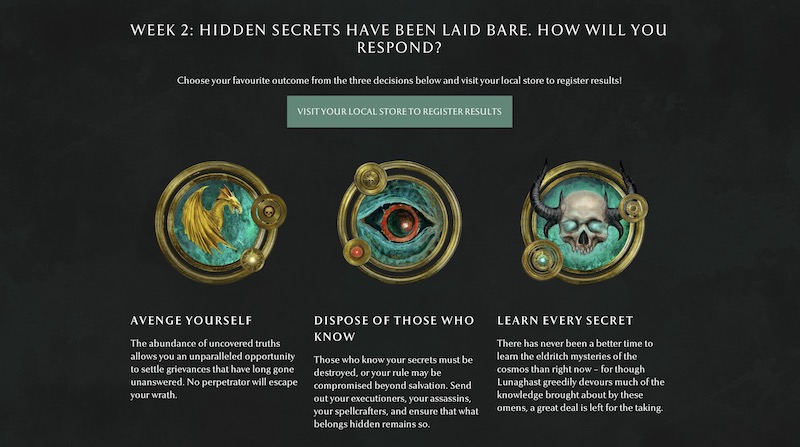 Right now… Skull is in the lead. And perhaps there it will stay.

But there are still (roughly) two days left to get your results in. Be sure and check back to see what happens when we roll into week 3. In the meantime…shadows loom over the Malign Portents. And Nagash’s forces run head long into clutches of the Queen of Shadows.

In the Malign Portents story, Trespassers in the Land of Mist, a column of undead forces travel into shadow-haunted Ulgu, where the twisted spires of the Daughters of Khaine watch over the mire and mist-filled land. There, the brothers Lhusim and Rhedgar, both disciples of Arkhan the Black, the Mortarch of Sacrament, face Morathi herself with shadowy magic and skeletal might.

It ends about as well as you’d expect, but there are two interesting takeaways from this. One, Nagash knows Morathi’s dark secret–that Khaine is dead and she holds his heart and has taken his power for herself–and two, Morathi is preparing to face down Nagash. In the end, Death will have its due…but what will happen when the god of death faces down a dead god, reborn in Morathi’s shadowy form?

Find out next week on Days of our Malign Portents…