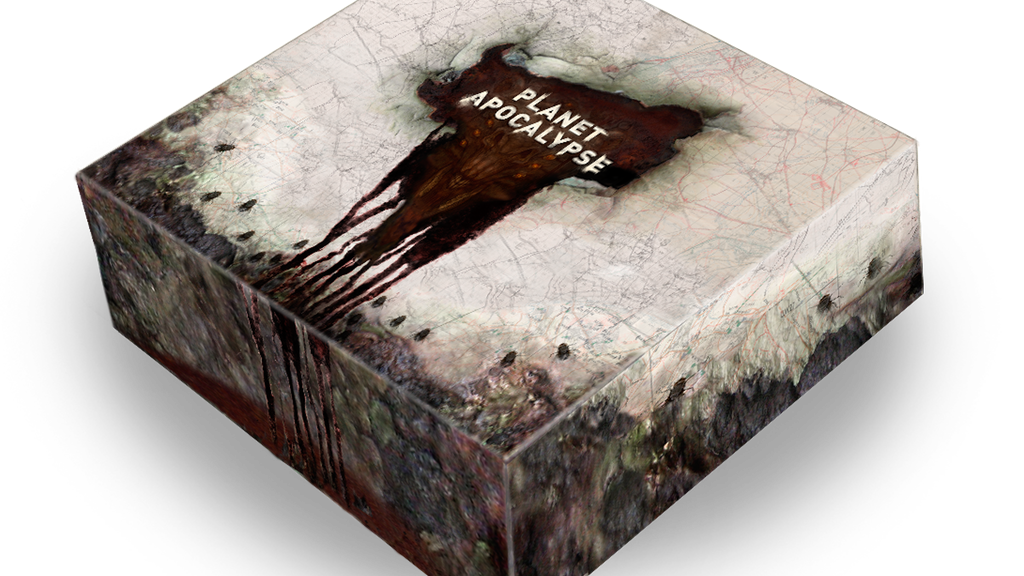 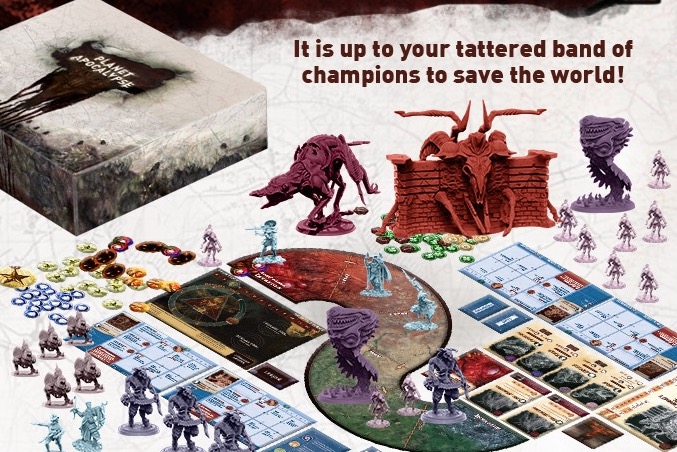 Sandy Petersen is a prolific designer of both tabletop and video games, though in recent years he is perhaps most well-known for the massive Cthulhu Wars board game. I’ve covered releases by Petersen Games in the past here on Bell of Lost Souls, and they were kind enough to send me a very early prototype for their latest project, Planet Apocalypse. Be aware that none of these pictures are representative of the final product, as this prototype consisted of handwritten cards, printouts, and pre-production models that were inked to show up better in Youtube videos.

Earth has been devastated following a worldwide invasion by the Demon Lords of Hell and their minions. The armies of humanity have failed time and time again to repel the invaders, and all seems lost. The last hope for humanity rests on the shoulders of a group of unique and eccentric individuals that have risen up to rally what remains of Earth’s armies and drive the denizens of Hell back to the pit that spawned them.

Mechanically, Planet Apocalypse is closer to the Orcs Must Die! board game than it is Cthulhu Wars, and even reuses a few concepts from it. In many ways, it’s a cooperative tower defense game where each player controls an upgradable hero. The goal is to stop the demons from reaching the map’s exit and slay the Demon Lord commanding them. Each demon that breaks through adds to the Doom Track, and once it reaches 13, its game over. Alternatively, the game is also over if the Demon Lord ever reaches the exit. 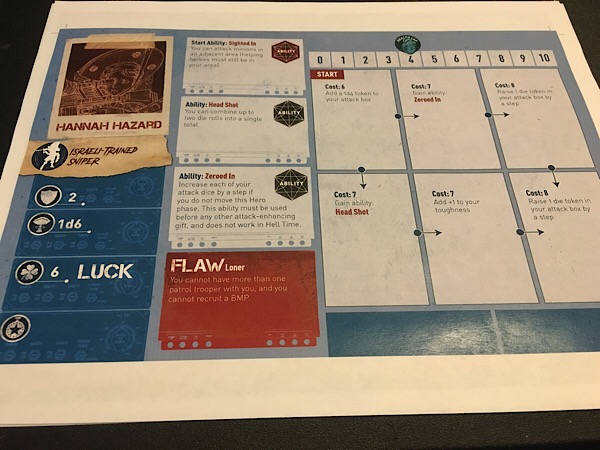 Let’s take a quick look at a hero stat sheet to give you an idea of how they work. Each hero has a base health cap, toughness, and starting attack dice value. Toughness is the number demons must exceed to damage you when making attacks, and each die roll that exceeds your toughness is one damage. Heroes also start with a set amount of luck, an ability, and a flaw. Luck tokens can be exchanged for courage, the game’s primary currency. Flaws are negative traits that must be applied whenever they are relevant. As the game progresses, you’ll gain courage by killing enemies. Courage can be spent on gifts, troopers, or to unlock your other abilities.

Gifts are essentially equipment that is drawn from a deck and laid out in a shop for any player to purchase. Once you buy a gift, you place it on one of your gift slots. This will also usually give you a secondary affect as dictated by your character sheet. If you’ve ever played Cthulhu Wars, it’s somewhat similar to acquiring your spell books.

Troopers are cards that players can acquire, and act as a combination of a meat shield, extra firepower, and defensive tower. They normally follow the hero that recruits them, and can assist them in battle by adding extra dice to their attacks or blocking hits. Alternatively, they can be set to ambush a location, which means that they’ll stay in an area and attack any demons that enter it. Any demons they kill adds to the Courage Pool. There’s five types of troopers in the base game that vary by cost, attack dice, toughness, and special abilities.

Once players have selected their hero, a map, and the Demon Lord they will be facing, it’s time to set everything up. Heroes begin on the map’s start location, and the Demon Lord begins in the Lord’s Area. All of the other spaces are filled out with Invasion tokens. You’ll also set out gifts from the deck, trooper cards, and set up the Control Panel shown below. The Courage and Despair Pools each start with four. The Courage Pool is basically a communal pool of courage tokens that can be spent by anyone, assuming they get permission. The Despair Pool determines how many dice you roll when an Invasion token is revealed, and thus what demons you encounter. You reveal an Invasion token once it occupies the same space as a hero, then roll the d6 Despair dice currently in the pool. Each side contains half of a circle, and each double you roll spawns a First, Second, or Third Circle demon and a lesser Larvae minion. The symbol breakdown on the Despair dice are three First, two Second, and one Third Circle. 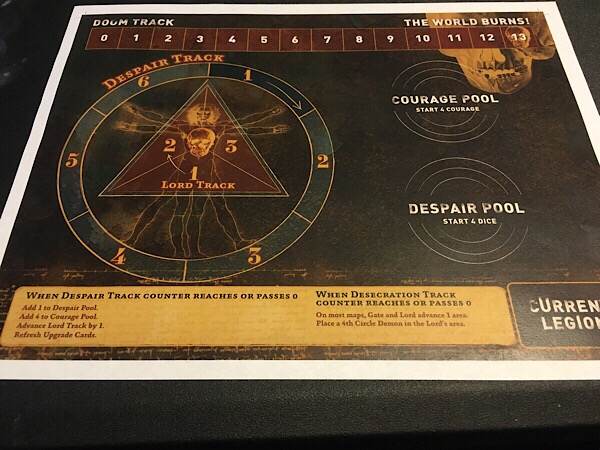 Like most Petersen games, turns are very quick and there isn’t a whole lot of downtime. A turn is divided into the Team Phase, the Hero Phase, and the Enemy Phase. During the Team Phase, a new Captain is determined. This works a lot like the Rift Lord mechanic in Orcs Must Die!. The Captain makes the final decision in determining who demons attack, who can spend Courage Pool tokens, etc. A new Captain is elected each round, so everyone will get a chance to be Captain at least once in most games. Then, new heroes spawn at the start of the map. This only happens if someone died, in which case they get to choose a new hero and start from scratch. Then, players take actions like buying gifts, recruiting troopers, and healing up.

After the Team Phase, players take their turns moving their heroes around the map and attacking demons. Combat is very simple and straightforward. Simply roll the dice in your character’s attack pool and assign the results to demons in the area with you. Exceeding the toughness of a demon damages it, and in the case of the lesser Larvae and First, Second, and Third Circle demons, you only need to successfully hit them once to score a kill. Planet Apocalypse has a lot of different dice, including d4s, d6s, d8s, d10s, and d12s, and what you roll all depends on what character, abilities, troopers, and other buffs you have. You’ll generally start with fairly crappy dice and gradually upgrade your pool throughout the game.

Now the demons get their chance to counterattack. First you move the Despair and Lord Tracks. The Despair Track goes from zero to six, and moves based on the number of players. Once it goes around the track a full time, you add one Despair die to the pool, add four to the Courage Pool, and increase the Lord Track by one. When the Lord Track goes through a full cycle, the Demon Lord advances one space and spawns a Fourth Circle Demon. These are mini bosses that have multiple health points, powerful attacks, and special effects, and they are all terrifying in one way or another. They also increase the Doom Track by four if they reach the end of the map. Demons then attack anything in their area and move one space. It’s at this point that any demons on the map’s start location leave the map and increase the Doom Track. 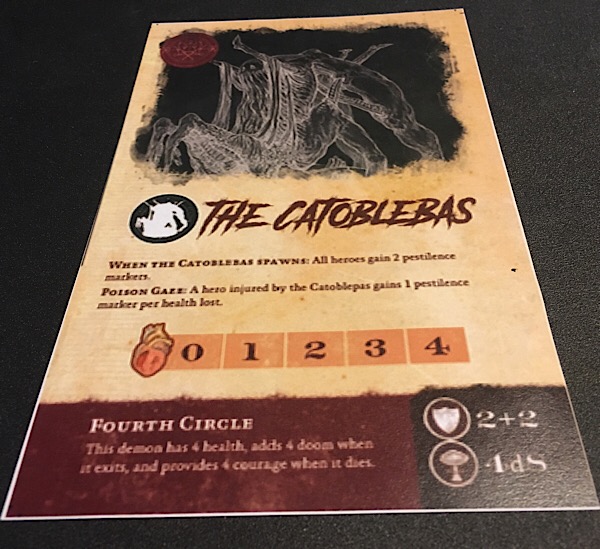 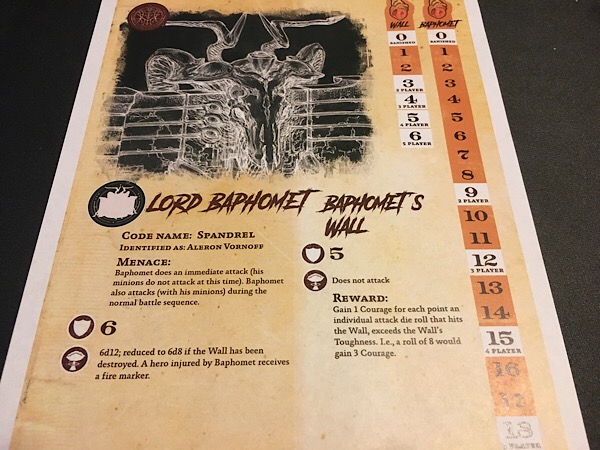 Since the ultimate goal is to kill the Demon Lord, you’ll eventually have to face him as a team. When a hero enters the same space as a Demon Lord, the game enters Hell Time. The player that initiated Hell Time can bring in other players to assist them, and the game enters a frozen state where no other actions or turn sequences occur. In Hell Mode, the only thing that happens are players take turns trading blows with the Demon Lord, and the only actions they can take are to attack or retreat. This continues until everyone retreats, dies, or the Demon Lord himself is killed, at which point the game returns to normal.

There’s plenty of ways to customize your difficulty in a session of Planet Apocalypse. The most obvious way is the map. The core game includes two maps, and the expansions include even more complicated ones with special rules. You can also randomize the Demon Lord you’ll be facing or tweak the number of dice in the Despair pool at the start of the game. 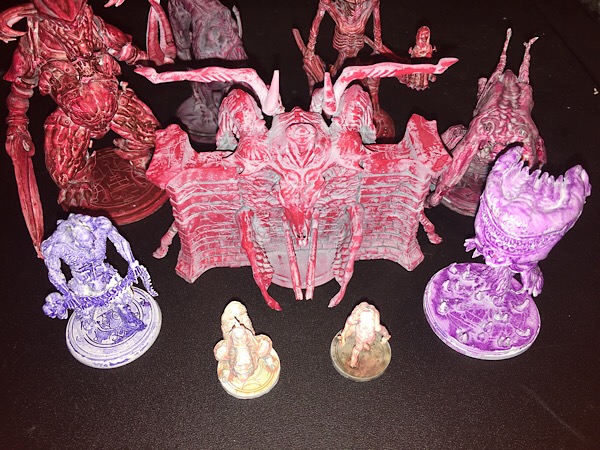 My group played the most basic map, Invasion, and ignored many of the harder difficulty settings to get a feel for the game. Invasion is one of the two maps included with the core game, and it doesn’t have any special rules. It took us a little under two hours to complete our first session of Planet Apocalypse. Once you get going, the game plays really quickly, and all the mechanics are generally pretty easy to understand. Just like with Cthulhu Wars, a lot of Planet Apocalypse’s complexity is introduced via expansion packs that add more complicated maps, Demon Lords, Fourth Circle demons, and heroes.

Since the game won’t be in backer’s hands until 2019, I can’t really comment on how much the game will change, or the quality of the final components. My prototype copy was essentially just the miniatures, handwritten cards, and printed pages, so obviously those aren’t representative of the final product. The pre-production miniatures are just as impressively detailed as Cthulhu Wars, and can easily pull double duty in an RPG or other tabletop game. I do hope they are made out of a more durable material though; the hard plastic used in the prototypes are quite brittle, and most of the miniatures didn’t survive the trip despite being pretty well protected in their case. 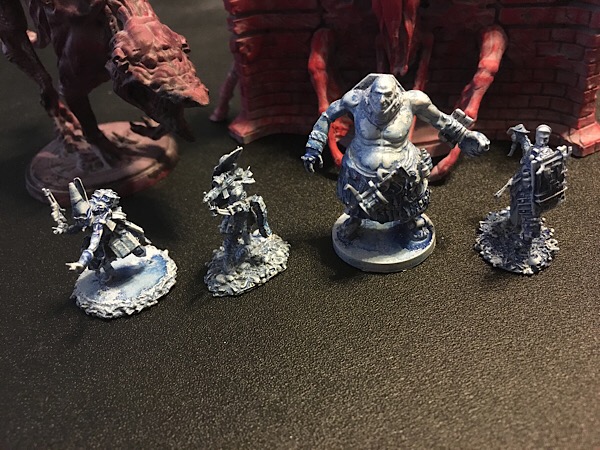 Planet Apocalypse is still on Kickstarter, and there is less than a week left at the time I’m writing this. Mechanically it’s just what you’d expect from Sandy Petersen, and provides a streamlined and easy-to-learn experience with lots of ways to customize the difficulty with optional rules and expansion packs. It’s already shaping up to be another massive board game well worth adding to your collection, even if only for the amazing and grisly selection of miniatures. Like previous Petersen Games products, expect to pay a fairly hefty price if you want everything. The basic pledge is $99 and includes the core game. If you want to go all-in, check out the $299 Hellhound pledge. These Kickstarter prices are a sizeable discount compared to MSRP. Planet Apocalypse is currently estimated to ship to backers in February 2019.

~Did you pledge to Planet Apocalypse?

Author: Frank Streva
Frank is an avid gamer and aspiring game designer. His specialty is the crowdfunding tabletop gaming industry centered around Kickstarter. Frank has written for Indie Game Source and began writing for Bell of Lost Souls in 2015.
Advertisement
Board Games Kickstarter Miniatures
Advertisement 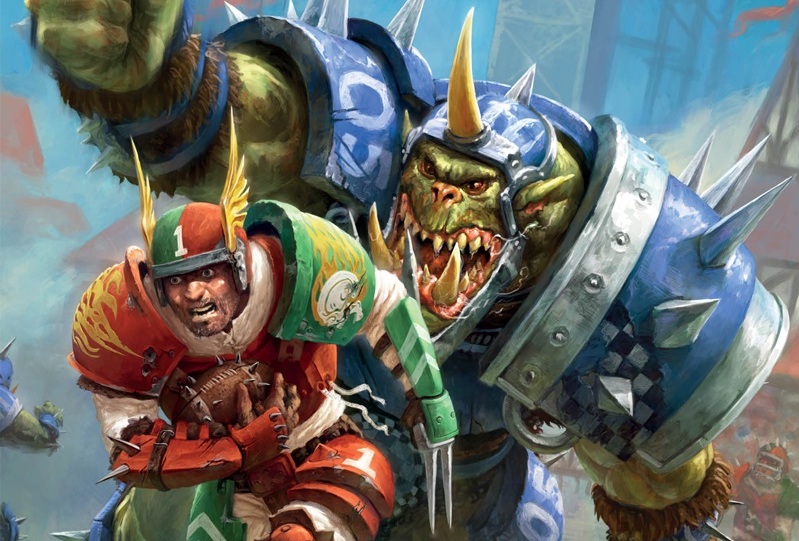