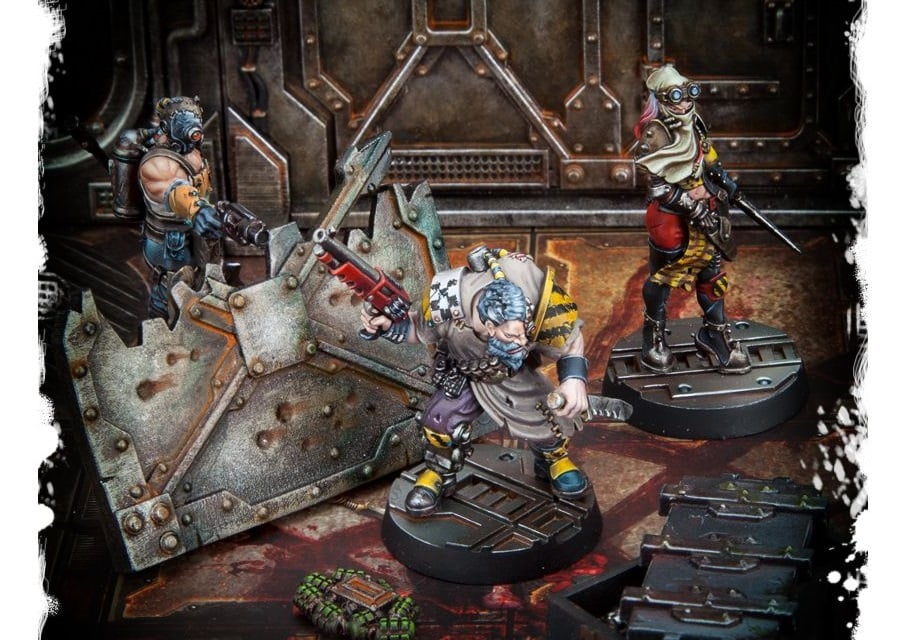 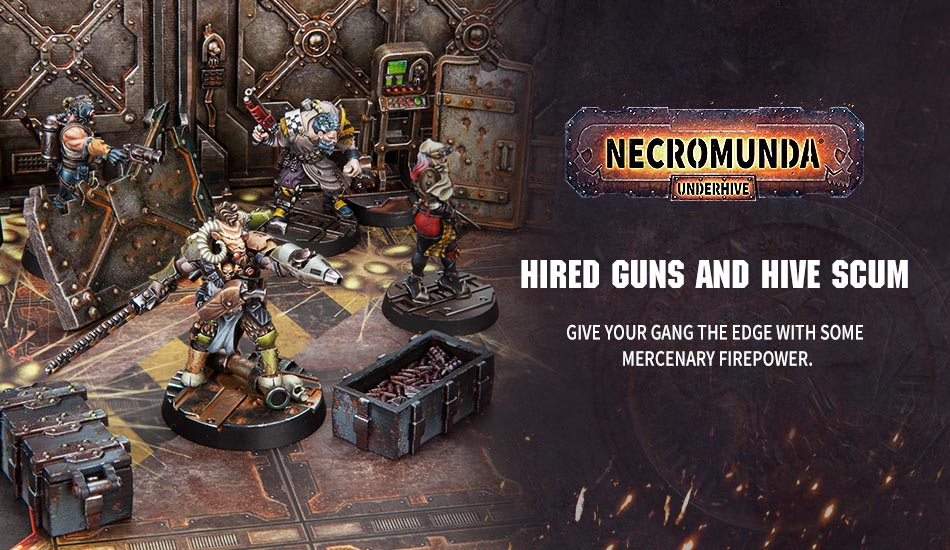 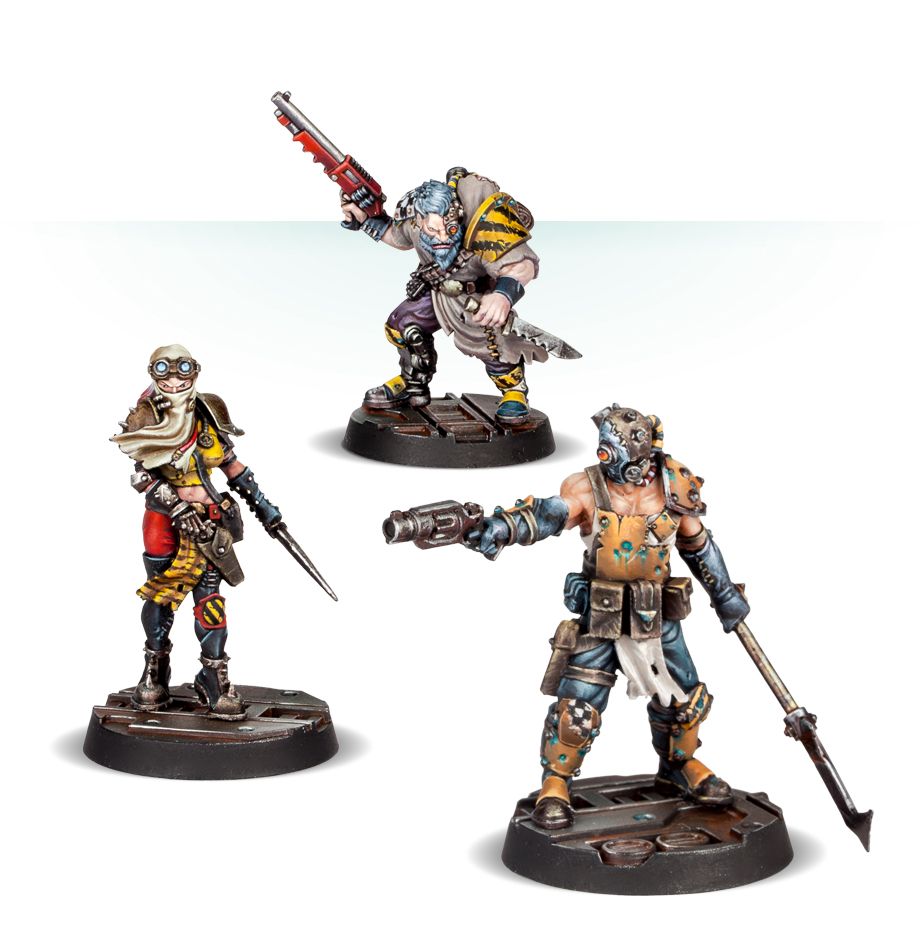 “Bounty Hunters are amongst the toughest and most dangerous of all Necromunda underhivers. They will hire their services to a gang leader, though, if there are no decent bounties to be had or if their interests are aligned, but such allegiances tend to be temporary.

Hive Scum, or Scummers, are masterless or itinerant hivers who will fight for anyone who offers them coin. Scum are too wild and independent to submit to the leadership of anyone for very long, and they hire out their services as they feel like it. Despite their carefree lifestyle and happy-go-lucky attitude, Scummers are good fighters, so their services are always in demand.

This multi-part resin kit contains the components necessary to build 2 Hive Scum and a Bounty Hunter, for use in games of Necromunda: Underhive.” 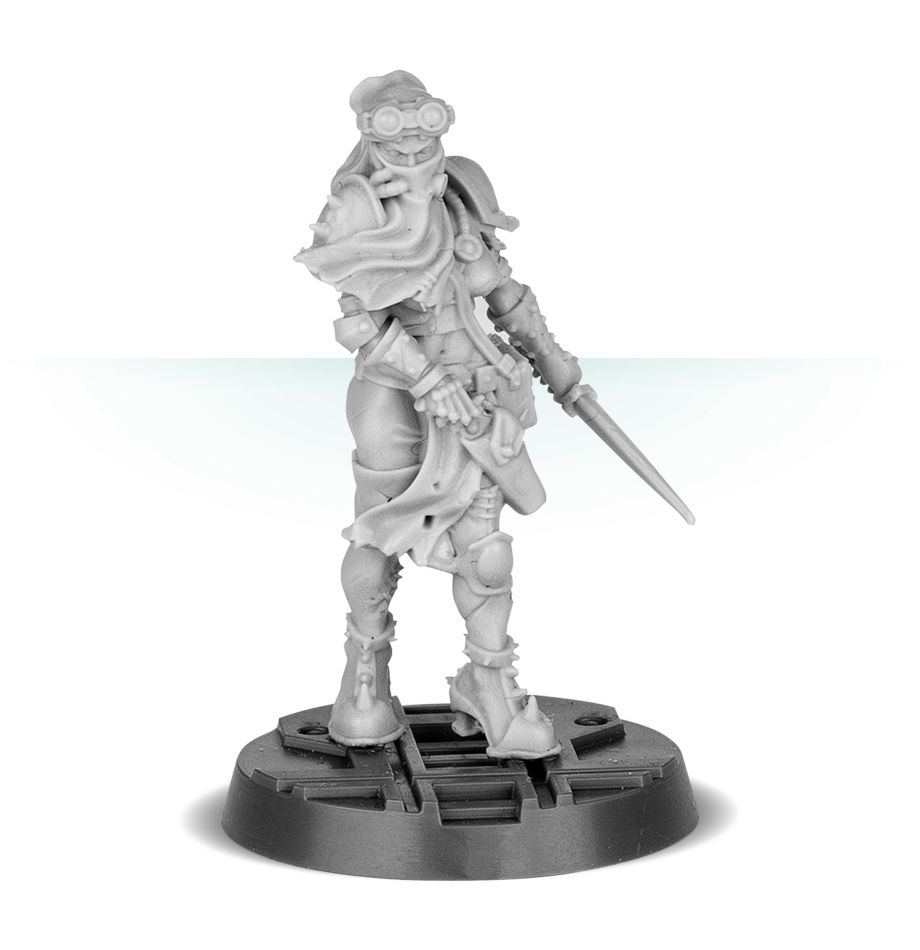 “Yolanda Skorn, the Bounty Hunter, carries a stilettos knife and holstered stub gun, which she is modelled reaching for with her cybernetic hand. Her face is mostly covered with a ragged veil, which hides the exile scars she received from House Escher. Her miniature is covered in the details you’d expect from a Bounty Hunter, with spikes and leather making up the bulk of her armour, and radio equipment attached to the goggles pushed up over her head.” 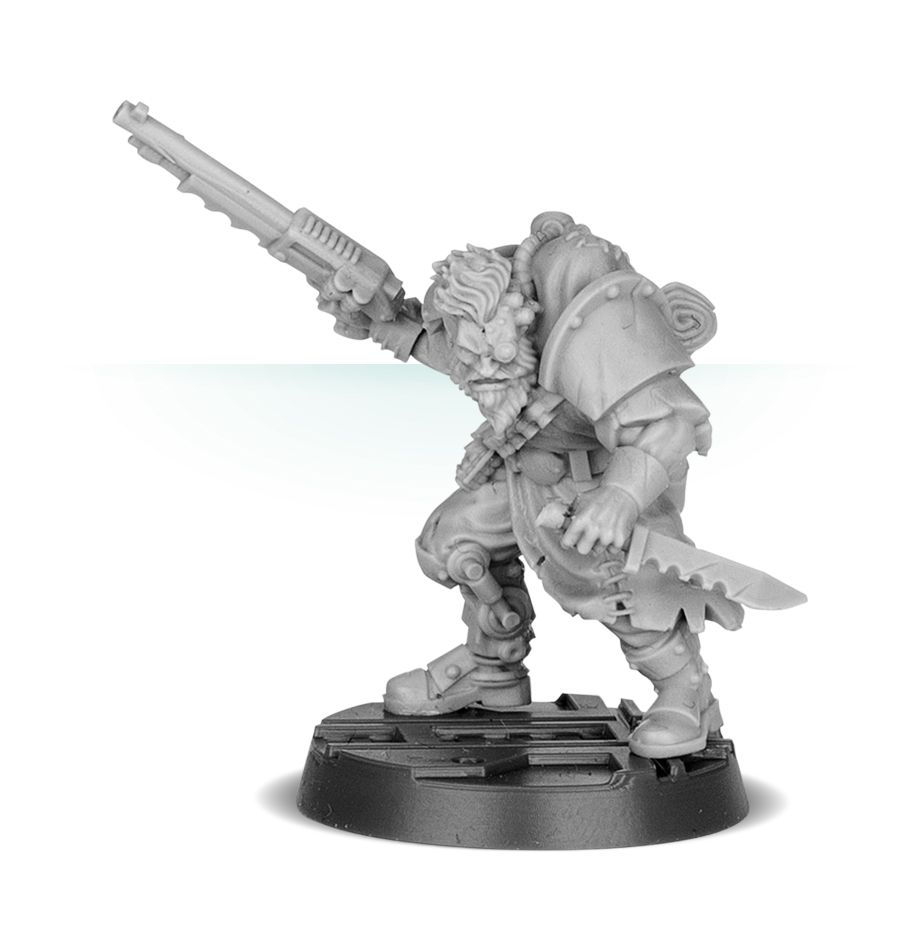 “Grub Targeson and Mad Dog Mono, the 2 Hive Scum, are much larger and more grizzled prospects – Grub, with his wide, hunched shoulders and impressive beard, clutches a combat shotgun and combat knife, while Mad Dog holds a stub gun and glaive. Grub is covered in chunky armour plating, while Mad Dog favours a more minimal approach, with a standout feature being his selection of equipment pouches on his toolbelt.” 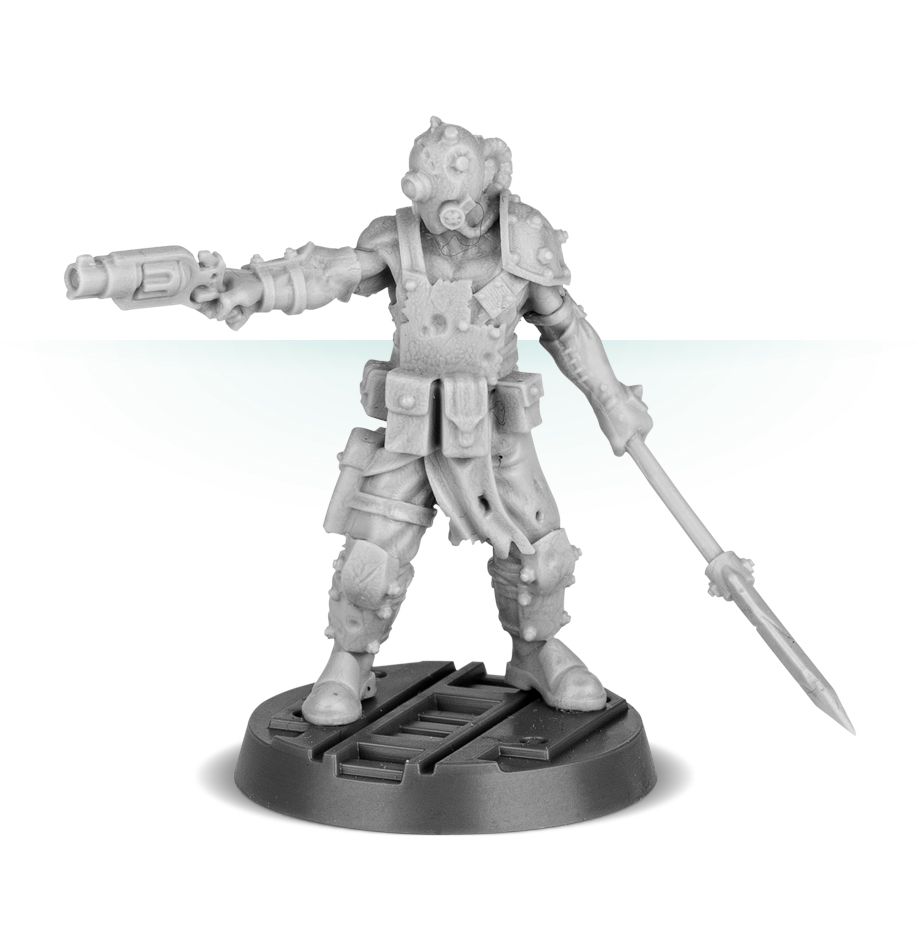 “These models come as 8 components, and are supplied with 3 sculpted Necromunda 25mm Round bases. Rules for using these characters are included, while generic rules for Bounty Hunters and Hive Scum are found in Gang War 2.” 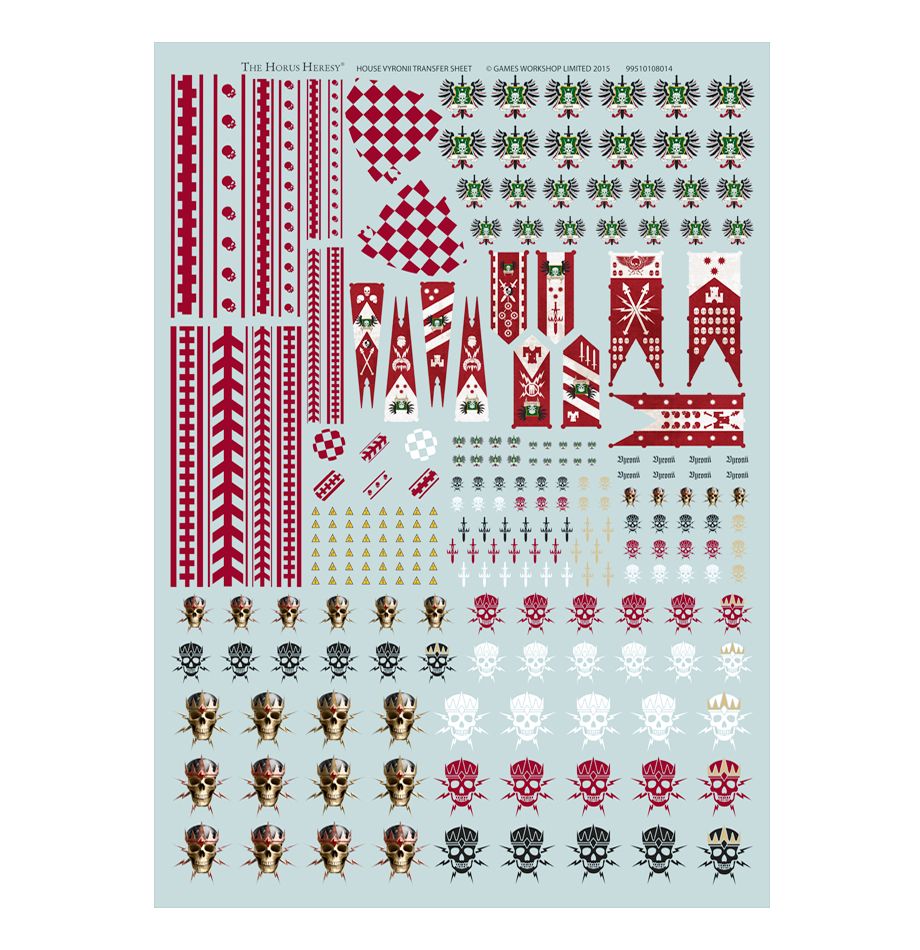 “Hailing from the Knight World of Damaetus III/II, House Vyronii was allied to the Imperium in the bitter war against the Traitors of Warmaster Horus. One of the most ancient of Knight Houses in the Segmentum Obscurus, the Vyronii shed so much of their noble blood during the Age of Strife that their numbers and resources were perilously depleted by the closing of the Great Crusade and the outbreak of galactic civil war. Determined not to become mute spectators to their own destiny, the nobles of House Vyronii swore they would stand firm against the arch-Traitor, or else perish.” 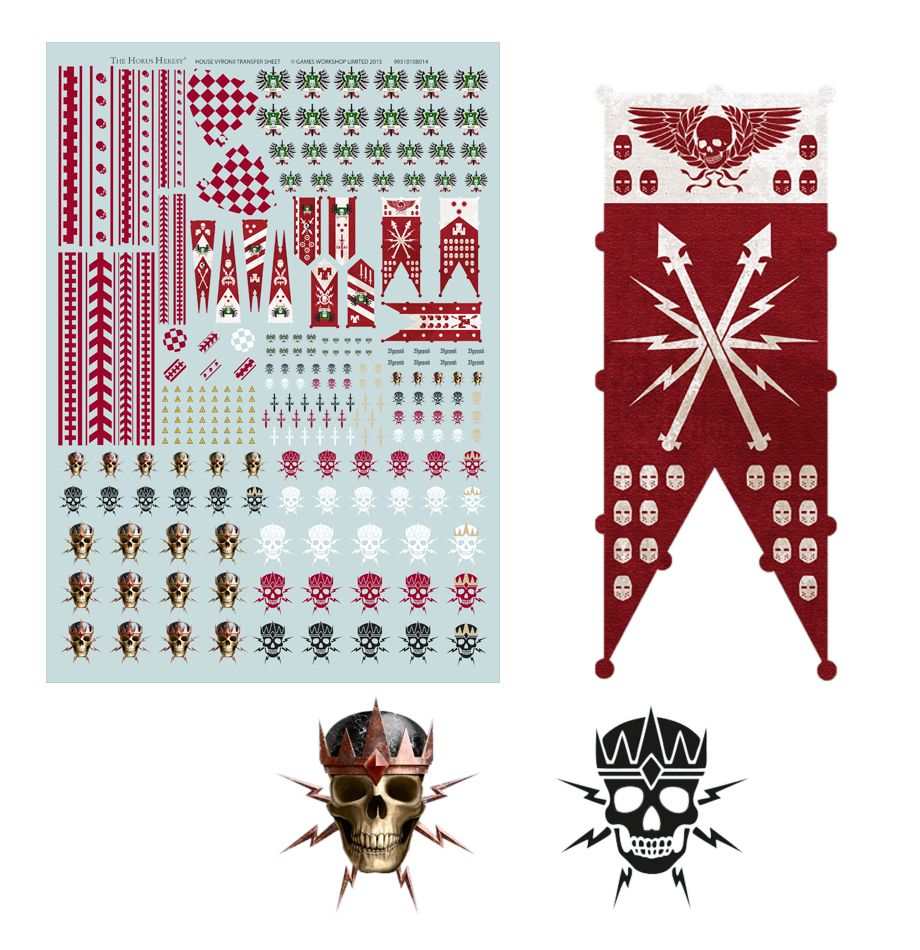 “This is an A4 sheet of transfers, perfect for adding detail to your Mechanicum army. It’s packed with the markings and insignia of House Vyronii, with house symbols, icons, crests, name plates, banners and personal heraldry for Knights included.”

Swear your allegiance…to the highest bidder!