I know it’s been a while since I’ve spoken here, but let’s just say that I was lost in the wilderness of normal, every day work (actually a hideous holiday retail job upon which I then dog-piled more free-lance gaming work).  At any rate, once I fought my way to freedom, I realized it was December, I really was not up-to-speed on current 40k matters and I still needed to finish readying my army for LVO.  It was time to take a crash-course in getting myself back into the swing of things and ready to fight (much less write about any of this stuff).  And, oh yeah, I signed up for the Blood Bowl Tournament at LVO this year too, and I was totally not ready for that either.  So, I took a deep breath, and dived right in.

So once I got my feet back under me, reread all the new goings-ons and played a couple games to ease myself back into the feel of 8th edition, I learned a couple important things: 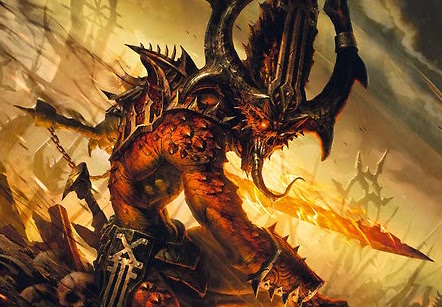 LVO Bound with the Unbound

Despite the whispers in the dark and the lures to stray from the Crimson Path, I managed to stay true to Khorne and completed my tasks ahead of LVO.  Of course, just a week ahead of the big show, Nurgle decided my devotion was lacking and smacked me down with the Flu.  As I’m sure you all know, this season has been really, really bad.  I managed to mostly shake it off just before we left Thursday, but it still clung to me throughout the whole weekend and beyond — sapping my strength, clogging my head and generally wearing me down.  I struggled to be me, but I think I mostly succeeded — though after-hours fun was just a No Go.

So how did we do?  Well, I think Khorne was pleased at least.  I personally chose this year to avoid the World Championships — though most of my teammates happily participated.  Instead, I chose to play the 40k Friendlies — in which I took 7th place overall at 3-1.  After the last couple years of playing in the World Championships, and not really enjoying myself due to always seemingly fighting the clock and well, the craziness of 7th edition, I really found the Friendlies a lot of fun.  I really enjoyed the extra hour of each game and all my opponents were great.  Even that first game I lost, where I initially blamed my opponent’s list — his Guard list equaled 2,400+ points at 100 power level whereas my Khorne Daemonkin (CSM/Daemons) clocked in at around 1,850 — was still a fun game.  I remember hacking guardsmen to pieces and my flying daemon prince smashing a vendetta out of the sky.  No, in retrospect, there was no one to blame for that loss but me.  I was an idiot.  We deployed Dawn of War and I deployed across a broad front against a vast Imperial Guard army and basically dared him to shoot me.  Well, he did.  And I need not have taken it.  It would have been a simple matter to faint a bit during deployment, get him to basically deploy the same and then deploy heavy against one side of his army.  Had I done so, it would have basically turned off half his shooting and been a far closer game.  I might have even pulled it out.  So, that was all on me.

As for the rest of the Unbound, we mostly under-performed.  The highest record I’m aware of at present was my buddy Herb, who went 3-2-1 with his Dark Eldar (cough, Reapers, cough cough), which was good enough to place top Dark Eldar for the event and top DE player for the season.  So, I guess that was good.  Congrats Herb.  There were also a couple other Arizona players that performed very well — congrats to both Mark and Don — but they have so far resisted attempts to assimilate them to the Unbound.  So I think Herb was still our best player at this point.

And for those interested regarding my Blood Bowl performance — I got smoked.  0-3 with my mighty goblins, the Shadowmoon Swampbats!  Of course, that would likely have even been worse, but I dropped the second day to play in the Friendlies.  I guess this is what I get for bringing a goblin team to a real, actually competitive Blood Bowl tournament.  I will say, I was impressed at the showing — 30+ Blood Bowl players and they all seemed true fans.  All my games were loads of fun, though as always, I played my first game like an idiot.  The hi-lights for the Swampbats were in game 1, my opening play was to have my squig (chainsaw) immediately blitz up to Griff Oberwald and bite his leg right off (that’s right, box cars for the Dead result), Super Dave later scored my lone touch down of the tournament, and then in game 3, on the last play of the game I was a single 3+ roll away from scoring a touch down from one end of the pitch to the other (without throwing a goblin).  I’m a bit bummed about that last one.  I’ve done some pretty amazing stuff with my goblins, some downright impossible stuff actually, but that would have been a awesome capstone.  And a great story.  A stupid amazing play on the last turn of the game, without re-rolls, to pull off … a tie.  Man, that would have been great.

So it turns out I had a great time at this LVO, minus the plague of course.  And not because I won.  7th place is nice and all, but it wasn’t about that.  It was about taking my time, actually finishing my games (finished every one of my Blood Bowl games too, easily) and having a good time with my opponents.  I enjoyed hollering “Praise to Khorne” and “Blood for the Blood God” or telling my opponent that Super Dave leaps over this prone player, dodges away from that blitzer and rushes in for the touch down.  What’s more, I think my opponents enjoyed it too.  It’s a great feeling when your opponent starts referring to your players by name as well, and that constantly happened to me.  So, I think it’s the less competitive stuff for me from now on.  Blood Bowl, Friendlies, or whatever else strikes my fancy in that way.  Oh, I’ll still play 40k competitively locally — as it’s honestly the only tournament play available — but that’s different.  Local tournaments still have less competitive guys playing as well, so hopefully it won’t be so bad.  I’ll miss the extra time though.  Still, it’s the only way to get my multiple games in a single day/weekend fix in, so there’s nothing for it.

Beyond that, I think it’s time to give in to the Whispers in the Dark.  I’m gonna devote pretty much the rest of my entire modelling year to the Thousand Sons.  It’s time to embrace the Ninefold Path once more and I’m already writing lists.  But, I’ll still play the Cult of the Brass Bull here and there.  There’s still a few models more to add to the army or swap out for inferior ones — an army is never really done.  Besides, I don’t think I can allow myself to play in a tournament without a fully painted army.  The Thousand Sons still need plenty of work sadly.  I need to get crackin.’

~So what do you think?   Did you attend LVO?  Was it a good time?  Share with us in the comments below.