RPG Monster Spotlight: Are You A Cambioff Or A Cambion 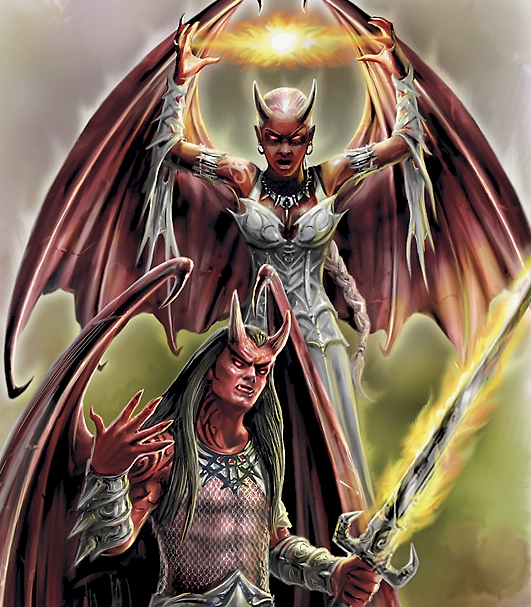 The fiendish spawn of demons and mortals, this week’s monster wields infernal power like a fighter wields swords.

The Cambion is, from a certain point of view, an incredibly powerful demon, born to rule over others with their infernal lineage granting them power the likes of which many mortals cannot possibly imagine, serving their fell masters or other, evil powers. From another point of view, they’re infernal pawns, spawned to serve demons, devils, or any others as a result of their fiendish heritage. But whether that heritage is a blessing or a curse (and why not both?), Cambions, it seems, will have an important role to play in the coming months. So let’s take a look at these fiendish creatures, giving them their moment in the spotlight. 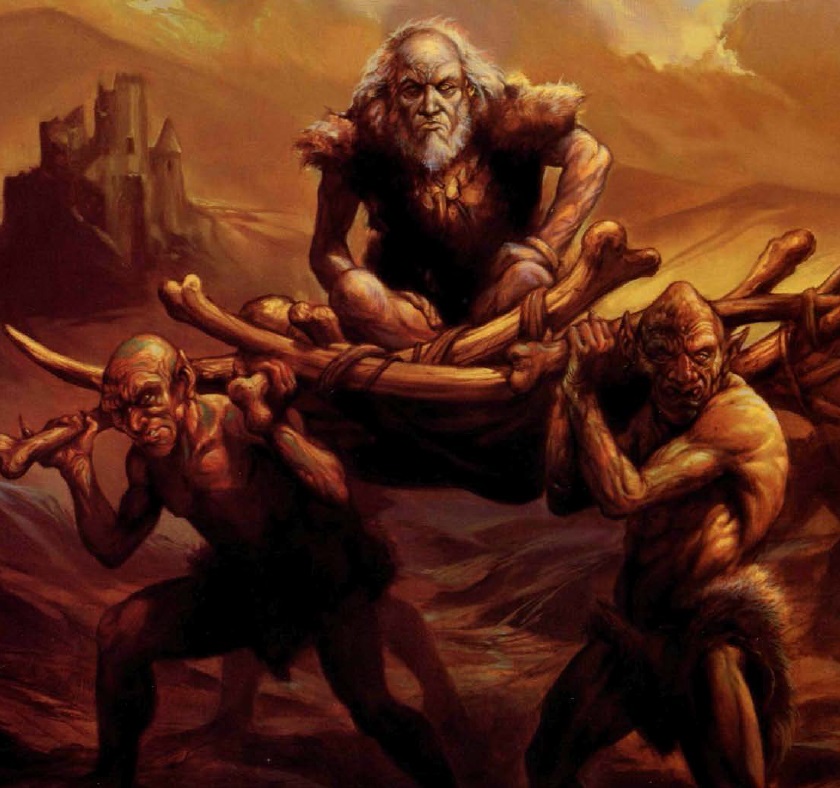 Cambions have been a part of Dungeons and Dragons since the Monster Manual II. There they made their iconic appearance as the spawn of a mortal and a demon. These infernal scions have since found their way into the nooks and crannies of D&D History. Perhaps the most famous Cambion is Iuz–sometimes called Iuz the Old or Iuz the Wicked, Iuz was originally the cambion child of the demon prince Graz’zt and Iggwilv, the witch queen of Perrenland (among other places). He did a whole bunch of evil things, helped lay the foundations for the Temple of Elemental Evil, and like all great villains in Oerth, failed to conquer the Free City of Greyhawk at least like, three times.

Whatever they get up to, Cambions have always been a representation of the temptation of power in D&D. It’s in their origin story–a mortal mating with a demon, that literal lust for power resulting in a powerful being. Though they may not be the powerhouses they were back in the 1st Edition days, Cambions have endured throughout the editions. They make excellent villains whatever the edition. They’re great schemers, and otherworldly enough to attract a following–these are leaders. But unlike succubi or other “sit-in-the-web” types, Cambions are power expressed, and they lead on the field as well as off it.

1st Edition Cambions as we know them today were split into Cambions and Alu-Demons, Cambions being the spawn of a human woman mating with a demon, while alu-demons are the offspring of succubi and humans. Either way, both of these demons (well semi-demons) were fairly powerful. Cambions maintained a slight edge in terms of raw infernal power they both had considerable magical might to mess around with. All Alu-Demons could count on being able to charm person, shape change, or use ESP, and Suggestion. Additionally they can Dimension door and drain energy from opponents, much like the Vampiric Touch spell we all know and love. 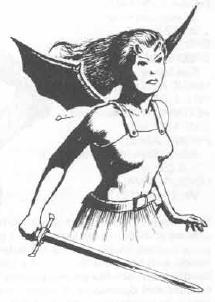 Cambions on the other hand can be either Major or Baron/Marquis Cambions, which range from 5-8 hit dice, to 9-16. Like the Alu-Demons, these are much more powerful than normal humanoid creatures, with the majority of their stats having a significant boost, in particular strength and Dexterity. Cambions of exceptional power can cause fear, detect magic, levitate, and polymorph self. In addition they fight as a fighter equal to their hit dice, and if they have great Wisdom can become evil clerics or assassins.

In 2nd Edition, Cambions and Alu-Demons (now called Alu-Fiends) are classified as Tanar’ri (albeit lesser ones), and aside from a few tweaks to their stat generation mechanics, they are very similar to their 1st Edition counterparts. Though in 2nd Edition, thanks to Planescape, they step into a much better leadership type role, gaining a number abilities to help give them personality. Cambions are more powerful here–they all have magical weapons and armor, and a chance for it to be something more unique than a generic +X piece of equipment. They also can cast as Wizards of their hit dice in level, and have innate thief abilities. They are reviled a little by the rest of Abyssal society, but accepted as powerful servants, bodyguards, and advisors 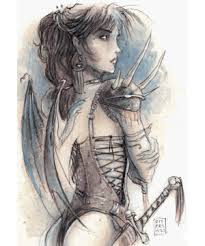 Interestingly enough, in this edition, Alu-Fiends wield more potential magical might–they might have lost some of their hit dice and protection from the previous edition, but they can be up to 12th level mages with full spell abilities, and the ability to choose their spells freely, they are incredibly dangerous with the right spells. Curiously, Alu-Fiends are also not always evil. Sometimes they are neutral of some flavor or another, owing to their human parent’s morality. 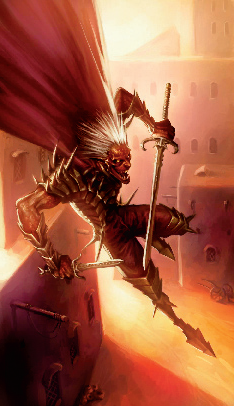 3rd Edition Cambions are all but absent until very near to the end of the edition–they make an appearance in the Expedition to Demonweb Pits in the very back. But again, these are fairly powerful creatures (for their weight class) though they are relegated to a “mere” CR 5. But looking over what they get, it’s fairly clear that these are prepared more as a powerful player race–or at least as a monster designed around taking class levels–and indeed they get a sidebar that talks about their ability score adjustments and which class they might take.

But the generic Cambion is no slouch–they can protect themselves with mirror image, and wield an okay couple of attacks plus poison. They lose a lot of the native “this creature is also a mage” from earlier editions because it became much easier to simply add class levels to a monster, owing to the modular nature of the engine.

4th Edition Cambions, on the other hand, are much more powerful creatures. In addition to having that sweet mesh shirt that would not look out of place at an INXS concert, they come in two standard varieties. First there’s the Cambion Hellsword, who is a Brute at the upper end of the heroic tier monsters. Hellswords are fairly resilient opponents, who have a relatively high AC and fly speed to get them into melee with the squishier targets of a party’s backline. Once there, they can use their fiery greatsword or their Whirlwind Charge to attack one or more opponents.

The other Cambion variant, the Hellfire Magus, is all about littering the battlefield with infernal magic. Wither throwing rays of hellfire which knock targets prone, fireblasts that deal ongoing fire damage, or getting a leg up on characters trying to hit them with ranged attacks, Hellfire Magi were a powerful opponent if paired with other henchmen. 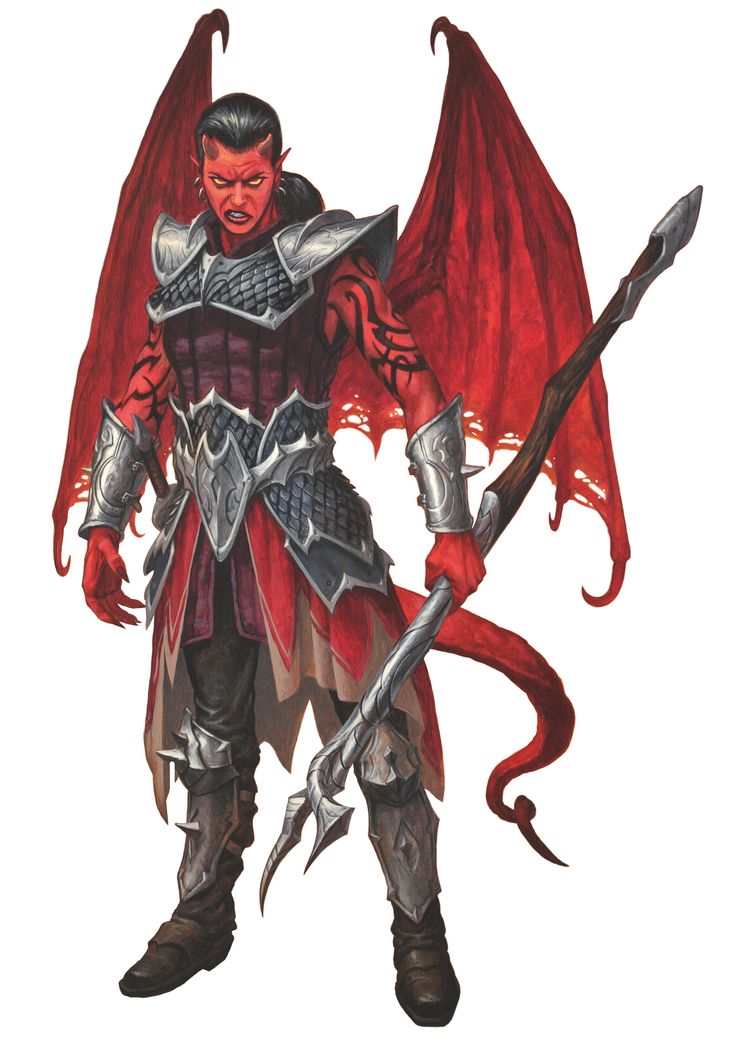 Finally we come to 5th Edition. Cambions in this edition fall back into that “representing the temptation of power” or perhaps they represent raw ambition. Because Cambions are born with this innate drive to rule mortals–a Cambion born in the prime material plane might grow to orchestrate uprisings, gathering mortals and lesser devils to try and serve it. If they’re working with their fiendish parent, they serve their infernal sire with the expectation that one day they’ll rise to prominence in the courts of the Lower Planes. And of course, Graz’zt, who loves making Cambions, has basically a network of them throughout the multiverse.

Cambions are a solid Challenge 5, which is another downswing in terms of overall powers, but one alone is a powerful warrior. They have some spellcasting that doesn’t really matter in terms of combat, but they have multiattack and can either strike with their spear or use a fire ray. As well they have a powerful, long lasting Charm effect that makes them good at positioning themselves in a place of power.

5th Edition Cambions make excellent villains for the cap of a low level adventure/campaign. By the time your characters are 3rd level, the Cambion is a great way to challenge them. They have a decent swath of hit points (82 on average, but if you’re the rolling sort of GM, could be more or less). At any rate, what makes them a threat to parties at or slightly below their level is their native resistances.

They’re resistant to cold, fire, lightning, and poison–so all the most common effects–and they have resistance to damage from nonmagical weapons. Now while that is fairly easy to overcome, by 3rd level magic items are still fairly uncommon–and if you’re playing a low-magic campaign, even better.

They work best leading a squad of henchmen. Especially if you borrow some of the cultist rules from that Fiendish Unearthed Arcana a while back, which let you add specific boons for cultists and other worshippers of infernal power. This gives you a lot of flavor backing a palpable threat. And they’re accurate enough that, with advantage, they can still cause problems for even higher level parties. And with the upcoming Mordenkainen’s Tome of Foes–which will feature new rules for creating specific flavors of Cambion (and perhaps more powerful ones)–it’s clear these fiends have no small part to play in the upcoming Blood War.

Author: J.R. Zambrano
Bell of Lost Souls Staff Writer and DM, J.R. covers RPGs of all stripes and on occasion eats sandwiches. You can ask him about either at [email protected]
Advertisement
Dungeons & Dragons Lore Retro Games RPGs Rules Wizards of the Coast
Advertisement