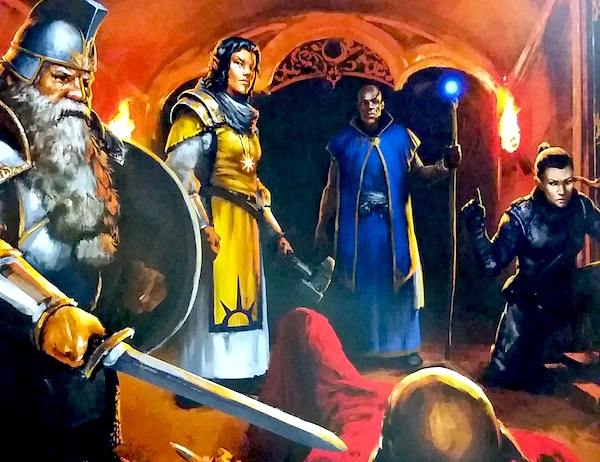 Dungeon Fantasy is a new GURPS-powered hack-n-slash fuelled feast of carnage and heroics that provides the perfect way to get into GURPS. Somewhere between an RPG and a challenging tactical board game, Dungeon Fantasy could almost he called GURPS lite, though I’d be hesitant to call anything that comes in a box this size “light.” 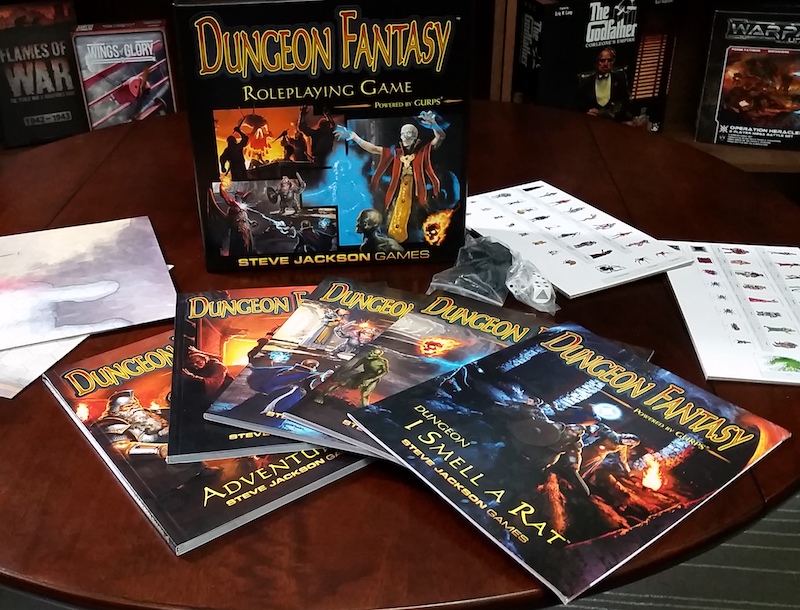 As you can see, it’s packed full of everything you need to get started. From monster and hero tokens to dice and maps and adventures, Dungeon Fantasy is a complete starter system. It presents GURPS in an updated, streamlined fashion, all focused on one goal–heroic hack-n-slash. But that description sells it short, because it’s more than that. 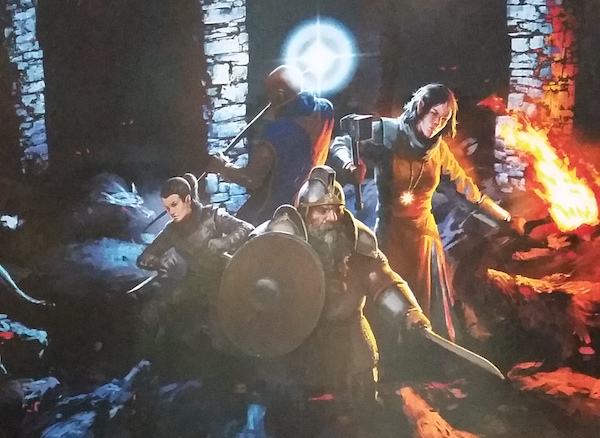 It’s more complex than Basic GURPS–it uses character templates to simplify the game, and only holds onto what it needs from GURPS top make the game work, but within that purview there’s so much depth and flexibility. That’s GURPS in a nutshell. GURPS has been around forever, and with a game like that, it can be hard to figure out how to get started. When you have every possible world at your fingertips, how do you choose? And GURPS, taken as a whole, can seem impenetrable. After all the rules do everything from make it so you can swing a sword, to representing psionic mecha combat in the dying heart of a star. Where do you even begin with that? 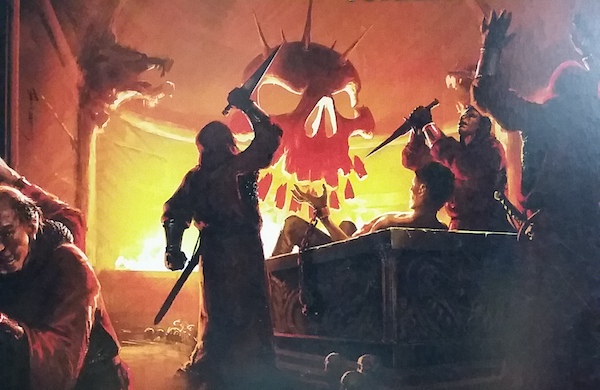 That’s what Dungeon Fantasy offers. A tight, focused experience that shows you the tactical complexity of GURPS without getting caught up in distractions. It puts you right in the action, especially with its prewritten adventures and gorgeous maps. 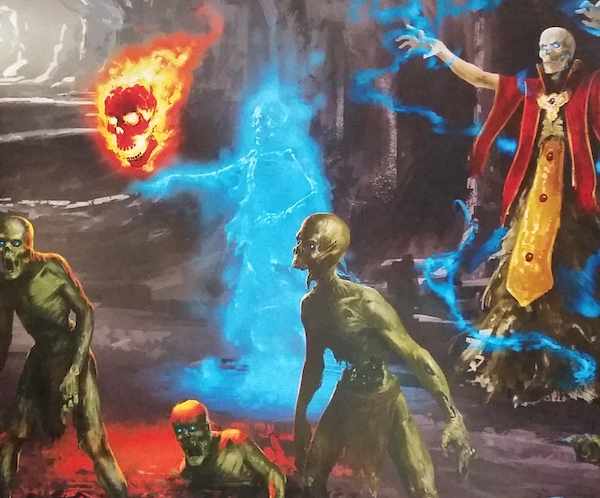 But even calling it a starter set/system doesn’t quite feel right, as Dungeon Fantasy lets you play with making your own adventures, monsters, even classes. A GM could keep a whole campaign going just from what comes in Dungeon Fantasy. 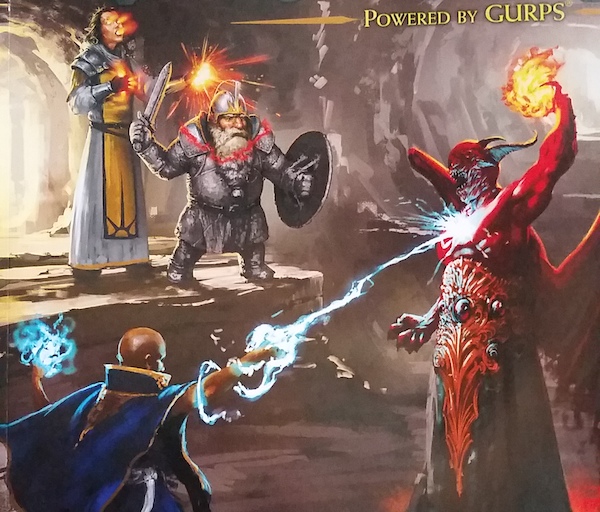 Admittedly it would need to be a dungeon and/or crawling kind of campaign. This isn’t a game you pick up because you want to deal with intrigue in the palace…you grab it too kick in the door and show those monsters what for. You’ll find a book of monsters and pregenned adventures. Another one just for spells. And another one for players and character creation. All of which are beautifully furnished with full-color artwork like what you see throughout this article.

So that’s what the game is. But how does it play? Quite well, actually. That distilled focus really works well for it. The battles are both challenging and fun to play through. The adventures do a great job of sewing everything up. It basically takes a part of GURPS and really mines it for everything. You won’t be distracted by alternate rules or choices that can lead you astray, it’s just GURPS at its best. And that’s what keeps you coming back to this, I think. It offers a different kind of challenge–but it’s a worthwhile one just the same. 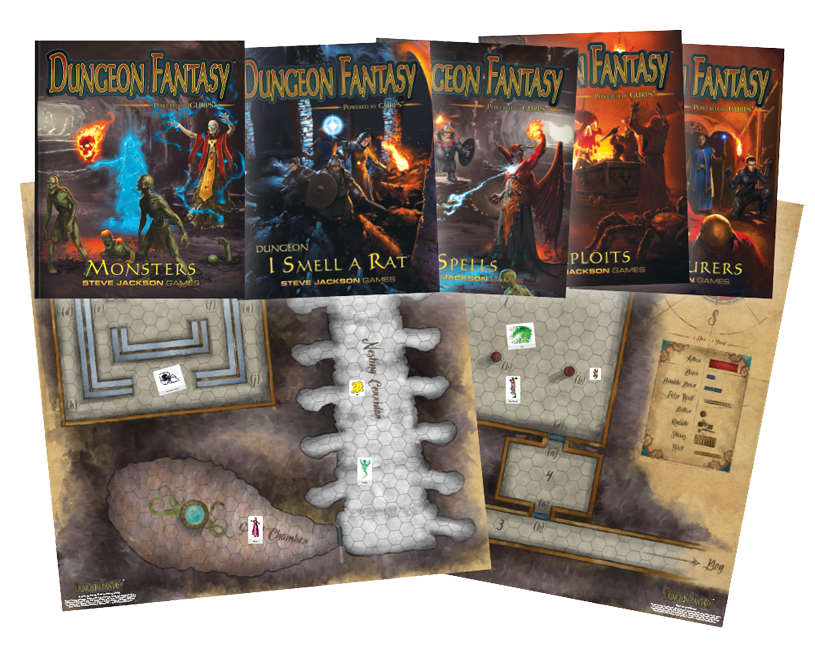 A fun hack ‘n’ slash campaign challenges unique heroes with clever dungeons. To get the most out of your fantasy adventures, you need a game that lets you customize and perfect characters, monsters, treasures, and traps.

That’s where the ready-to-play Dungeon Fantasy Roleplaying Game comes in. It harnesses the customizing power of the award-winning Generic Universal RolePlaying System (GURPS), and streamlines it so you have exactly what you need to take fully-realized characters on fantastic adventures.

Choose from 11 classic professions and nine races. Tailor your hero using quick-start templates and the time-tested GURPS point-build system. Gear up with a massive list of customizable armor and weapons. Pick from over 400 spells. Then battle foes chosen from more than 80 monsters.

Author: J.R. Zambrano
Bell of Lost Souls Staff Writer and DM, J.R. covers RPGs of all stripes and on occasion eats sandwiches. You can ask him about either at [email protected]
Advertisement
RPGs Rules Steve Jackson Games
Advertisement

NeverQuest Episode 27: The Hunters of the Dead