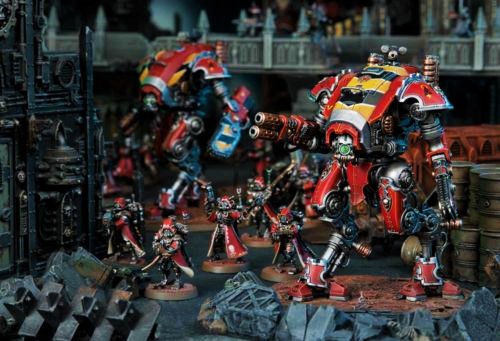 There is a new Knight on the block and Games Workshop is giving us a look under the hood!

When the word got out that TWO Knight Armiger Warglaives were going to be in the Forgebane box, we immediately wanted to know more. Well today, the info is coming directly from Games Workshop, so let’s dive in!

The Armiger Warglaive is a new kind of Imperial Knight – a lightweight assault walker that combines the power of its larger cousins with frightening speed and flexibility. With Forgebane allowing you to get your hands on not one but two Armiger Warglaives, here’s why we think you’ll want to add them to your army. 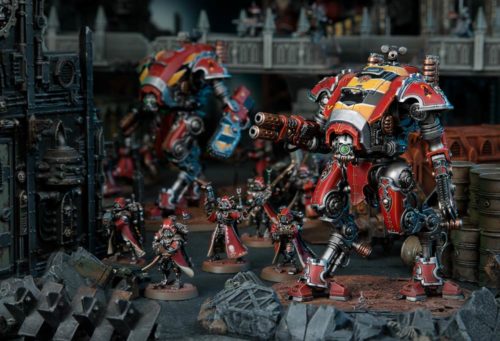 Armigers are indeed a Lord of War – however, they are the first Lord of War that you can take multiplies of in one slot.

“Unlike other Lords of War, you’ll be able to fit up to three Armigers in a single slot…”

Up to three of them in one slot is confirmed but we don’t have a confirmation on it they will be a “unit” and have to stay in range of each other or if they will have a level of independence like the Carnifex rules:

Will they have a similar rule? I would hope so!

Furthermore, these guys are pretty FAST with a 14″ move. They will be able to run down most things and then unload with their devastating attacks. Stat-wise, they also a Toughness of 7 and 12 Wounds with a 3+ save on top. And if that’s not durable enough, they also have an ion shield as well! But lets talk about those attacks…

The Armiger’s have 4 attacks in melee and a base strength of 6. That’s perfect for chewing on some armor as little can stand up to that Strength 12, AP -3, D3 attack. However, it does not have the ability of it’s larger cousins to be able to fall back and shoot. So watch out for those hordes…

At 30″ this is a pretty long range melta weapon. It’s Assault D3 as well so advancing and shooting is a valid tactic. And you’re going to want to advance because if you can get within 15″ you’ll have a much higher shot at doing more damage. These light-knights are going to cause lots of problems for armor. And just incase you were wondering, yes you can use the Knight of the Cog stratagem from the Ad Mech on this Knight: 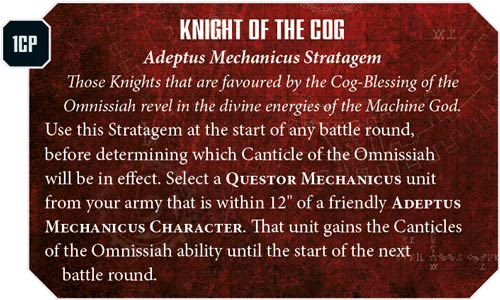 That could lead to some pretty deadly combos!

The Armiger Warglaive is coming with the new boxed set Forgebane which is going up on pre-order this weekend!

Gee, I wonder if that means we’re going to get a new Knight Codex soon…

Author: Adam Harrison
Writer, Editor, Texas Native, and Austinite for 15+ years, Adam covers all things Tabletop Gaming. Which includes Warhammer 40,000, Age of Sigmar, D&D, Board Games and everything else that involves dice, boards, cards and a table. A hobbyist, player, and collector of miniatures and games, Adam's current obsession are his Death Armies for Age of Sigmar, his Blood Angels and Tyranids for 40k, and his ever growing Arkham Horror: The Card Game Collection.
Advertisement
Adeptus Mechanicus Games Workshop Miniatures Rules Tabletop News Warhammer 40k
Advertisement