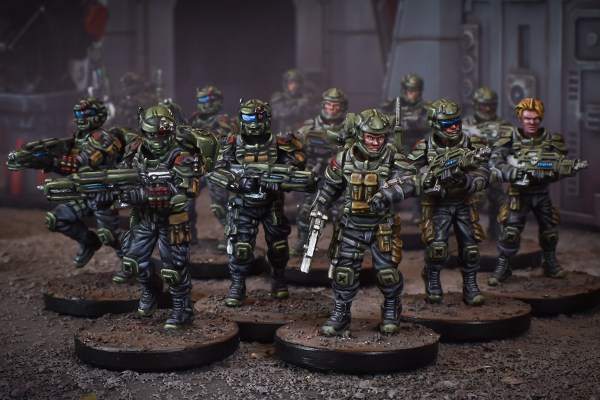 After its discovery five years ago, XH8-211 (called Starfall by its inhabitants) has retained its initial low appraisal. Besides the ‘squatters’ occupying the planet’s barren surface, the world has been ignored by the GCPS at large, seemingly having no resources or indigenous population worthy of corporate exploitation. Until the world-quakes began.

Alongside the release of the GCPS at the end of the month (on pre-order now!) we’ll be trying something new. Available on the website to pre-order, for the low, low price of FREE! (well, you’ll need to cover shipping if you want it on its own), we have brand new mini-supplement, featuring a campaign that pits the Veer-Myn against the GCPS. While stocks last, the Starfall campaign booklet can be added to orders at no extra cost and if you’re already ordering some of those sweet new GCPS miniatures, that means it’s totally FREE. Again, did we mention it’s FREE! FREEEEEEEEEEE.

This supplement brings some new background to the fore, as you’re introduced to the oft-overlooked planet of Starfall. Until recently, this world barely registered on GCPS records and was a hotbed of mercenary activity. Once valuable resources were unearthed by unusual tectonic activity, the planet was brought by the Damrod Mining Corporation, who swiftly dispatched their private military to stake their claim. However, it isn’t only the GCPS who have a stake on this world. The Veer-Myn have risen, conquering the world by force and now stand ready to repel the would-be invaders. The scene is set for a desperate battle between two ruthless powers. Whose side will you choose?

The campaign is based around the Starter Forces for the Veer-Myn and GCPS and even includes suggested army lists for these box set in Firefight. There are three simple scenarios to play through for the planet’s fate, with rules for linking them together into a short campaign. We also take a look at each force individually, with a miniatures showcase of the Mantic Studio range. This all ties into the coverage on Warpath: Firefight we’ll be sharing over the next few months so you can start playing the game with ease. We might even be recording a game ourselves in the not-too distant future!

You can pick up the Campaign Supplement here, or as part of a bundle which includes both armies, the Firefight Rulebook and a discount too!

The post Warpath: Firefight – What is Starfall? appeared first on Mantic Blog.

Have you gotten your Firefight Rulebook?

Author: Adam Harrison
Writer, Editor, Texas Native, and Austinite for 15+ years, Adam covers all things Tabletop Gaming. Which includes Warhammer 40,000, Age of Sigmar, D&D, Board Games and everything else that involves dice, boards, cards and a table. A hobbyist, player, and collector of miniatures and games, Adam's current obsession are his Death Armies for Age of Sigmar, his Blood Angels and Tyranids for 40k, and his ever growing Arkham Horror: The Card Game Collection.
Advertisement
Mantic Rules Tabletop News Warpath
Advertisement