Most people think that Baldur the Stonecleaver, otherwise known as Baldur1, just likes to just play with his rocks. While this can be true, Baldur1 offers so much more! Looking for a caster to pair with your Krueger2 Bones list? Baldur1 has you covered. Need a partner for your Kaya3 Call of the Wild list? Baldur1 is your man. Someone to pair with Una2 Devourers Host? Again, Baldur1 can do the job.

So what magical Baldur1 list can handle all this you ask? Well, the answer isn’t one list. It’s that Baldur1 is one of the few, if not only, Circle casters that can play a competitive list in every Circle Orboros theme available. On top of that, these list’s all play differently, utilizing different aspects of Baldur’s toolkit. Let’s take a look. 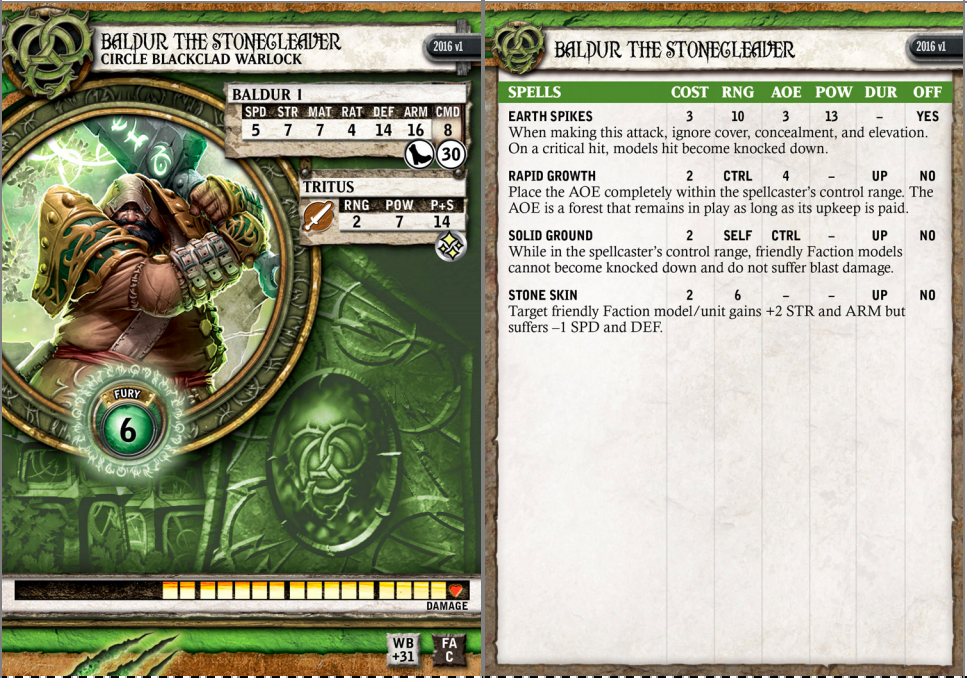 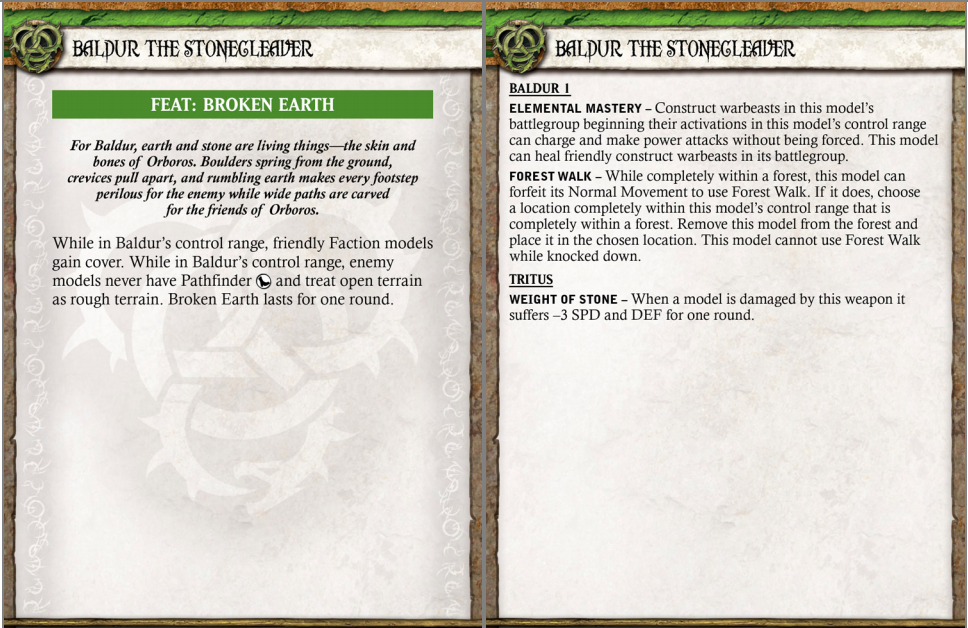 This is probably the most obvious theme to start with Baldur1 given his affinity for construct warbeasts. Baldur1 has the rare ability to heal constructs and gives them a free charge/power attack making them more efficient. In this theme, Baldur1 is looking to use his Stone Skin spell to make his beasts more resilient and Rapid Growth to block LOS with a forest. Your opponents will often forget just how many boxes Wolds have and many times will come up a few boxes short of killing your heavy. With all the healing available in this list your constructs are going to be fully operational until the last hit.

In this list, Baldur’s feat is going to be more about controlling the board for a scenario advantage. Cover is nice, but when your warbeats are mainly DEF 10, it’s not going to save them from being hit by guns. However, if you can get into scoring position, then feat to keep your opponents out of zones and away from flags you’ll find yourself scoring multiple turns in a row. 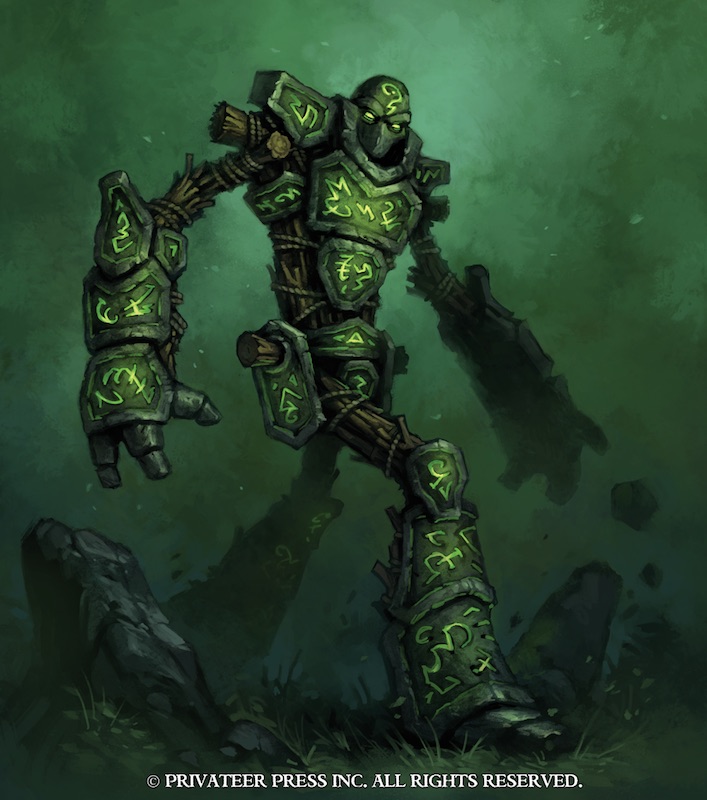 It’s worth noting that I think bringing a Woldwrath in Bones with Baldur1 is awesome. But we have a Woldwrath list later on so instead let’s go with a Woldwarden and Megalith build. This list looks to take advantage of Geomancied Earth Spikes by boosting the hits rolls and fishing for crit knockdown. Don’t forget that your Woldwardens can trample forward for free and then cast a spell. This makes the threat range of Earth Spikes 18 inches! With all the guns in the list, if you can knock down their caster, you should be able to finish the game. This list also boasts excellent fury management, tons of sprays and solid attrition through lots of healing and pieces like the Sentry Stones.

This is my favorite theme to play Baldur1 in; he works incredibly well with these heart-eating savages and fixes a lot of the issues Tharn have. Solid Ground is a key spell here, providing no blast damage and no knockdown. For the female Tharn no blast damage combined with their innate stealth makes these ladies a serious pain to shoot down. Tough combined with no knockdown gives the Ravagers the boost they need to make it into the opponent’s army.

Stone Skin also plays a significant role here as it brings the Ravagers to a very respectable POW 15 and ARM 17. Or put Stone Skin on Ghetorix to bring him up to ARM 21 with Spiny Growth and let him hold a zone and run the table late game. 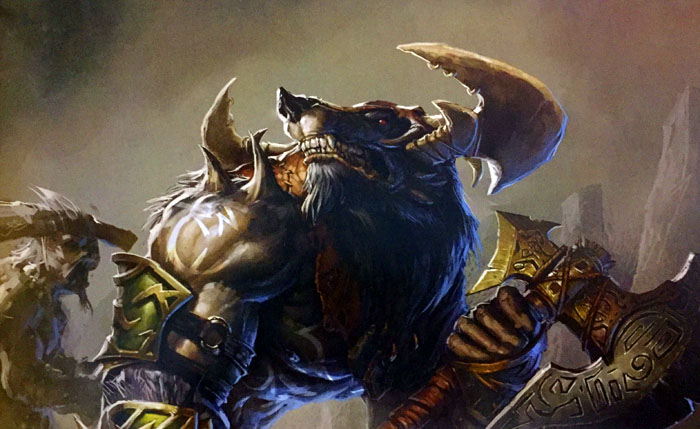 Rapid Growth is always useful to block LOS, but Ravagers takes this even further with Tree Walker which allows them to see through the forest and gives them +2 DEF vs. melee attacks while in the forest! DEF 15, tough no knockdown models is a serious pain for some lists to remove.

In this theme, the feat might be used really early on to protect the army from a shooting list. If you find yourself going 2nd against a ranged heavy army, you might even consider popping feat on your turn 1. However, depending on terrain and your forest placement even against a ranged heavy army you may be able to hold your feat and wait until you can use it to gain a scenario advantage. A lot of this is terrain and matchup dependent so practicing with the list is key to knowing when your feat should be popped.

There are many possible versions of a Baldur1 Tharn list. He pairs well with just about all Tharn models(no not the Bloodpack, leave them on the shelf). This list uses the new Spirit Cauldron to give the Death Wolves and Ravagers corpses in the early game. Initially, this list had two units of Ravagers, but the Spirit Cauldron guarantees corpses for the Death Wolves which makes them more reliable and allowed me to expand the battlegroup and work in Bloodweavers.

Call of the Wild

This theme is all about the living warbeasts of Circle. Baldur1 is looking to take advantage of the high DEF of Circle warbeasts to keep them from being hit. Solid Ground is the key spell here, keeping all of the warbeasts standing so your opponent can’t get around their DEF by knocking them down. However, DEF 14 isn’t enough by itself, which is where Wrong Eye and Snapjaw come into play.

Don’t get me wrong, Snapjaw is a solid warbeast, but Star Crossed is the real reason you are bringing this duo. With Wrong Eye’s Star Crossed bubble messing with your opponents dice you should hopefully be able to tip the dice math in your favor and keep the enemy from being able to hit you enough times to finish off a warbeast. This ensures that your opponent has to boost to hit and even then might come up short.

As always Rapid Growth is excellent for LOS blocking and can also be used to trigger Prowl on the Stalker. Stone Skin is useful, but remember it lowers your DEF, so it’s better on Megalith typically in this list.

This list plays somewhat of a bunker style, with the Warpwolves all standing close to Wrong Eye to be in the Star Crossed bubble. However, playing like this can allow your opponents an easy scenario win so be mindful you use your other pieces to contest and score as needed. The Scarsfell Griffin, Lord of the Feast and Blackclads, are all good contesting pieces to keep you in the game while your battlegroup does the heavy lifting. Lastly, while Star Crossed is great, you can’t stand next to Wrong Eye forever. Knowing when to commit a heavy is key and making sure you get a good trade in return is important to a low model count list like this. 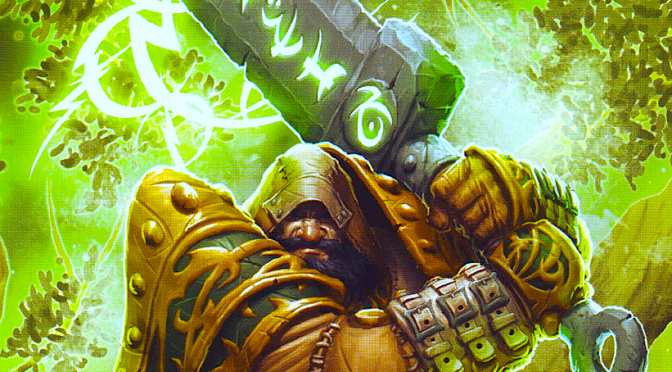 I have to confess; this is the theme I have thought about the least with Baldur1. I think he can play in Wild Hunt as well as anyone else, but the other themes have held my attention and kept me from truly testing this list. It is worth noting that this is one of the few themes that allows for Purebloods and Woldwyrds to be in the same list and that alone is worth considering. With all that being said I do think this list is competitive and has a solid game plan to win via scenario/attrition.

The Woldwrath acts as the anchor piece. With Stone Skin bumping it up to ARM 22 and Sacred Ward protecting it from spells, the Wrath becomes a hard piece for many lists to deal with. We aren’t able to bring a Stoneshaper in this theme, but Stone Skin helps make up for that with +2 STR. The Wrath is pretty slow with Stone Skin, but luckily brings a nice gun to contribute early game as well.

I like ambushing the Wolves of Orboros to either score on an unsuspecting opponent or preventing them from scoring while hopefully feating to score myself. Ambushing Wolves with Power Swell can potentially take out a hard target or two and threaten an impressive 14” from each table edge.

Baldur’s feat allows Warpborn Skinwalkers to make it into the fight and with Unyielding, eight wounds and hyper regeneration these guys have the potential to stick around a long time. Throwing Stone Skin on them is also a worthy consideration if nothing is threatening the Woldwrath.

Early game this list has some nice shooting threats that force your opponent to come forward. The Death Wolves + Spirit Cauldron can mulch through a lot of infantry, and the Skinwalkers should be able to hold a zone pretty well. Each round the Reeves can let loose 2 POW 19 shots into something important or use 2-3 man combined ranged attacks to remove infantry models.

This theme hasn’t seen much love, but recently a Baldur1 Secret Masters list piloted by Tom Guan won the Champions event at Captaincon. This list uses Solid Ground, Stone Skin, and Rapid Growth to try and grind out a scenario win. Stone Skin on the Woldwrath again makes this Colossal an incredible anchor. Also, the Woldwrath’s animus plays a key roll in boosting magic attack rolls allowing the Druids to easily knock down or push enemy models away from scenario elements.

There is some really great defensive tech at work here and arguably one of the best cloud walls in the game. Druids have prowl and can make their own clouds thereby triggering stealth. The command attachment for Druids can protect them from all elemental damage. This means electro leaps and spells like Ashes to Ashes can’t hurt them, although upcoming rules changes to immunity might change this in the near future. Baldur1 brings Solid Ground to the table so blast damage can’t kill them. If you happen to be able to hit DEF 15 stealth models, they have sac pawn to minion units in this theme! So instead of killing a Druid a lowly Shambler behind the Druid dies. There simply isn’t a good way to take the Druids down from range. 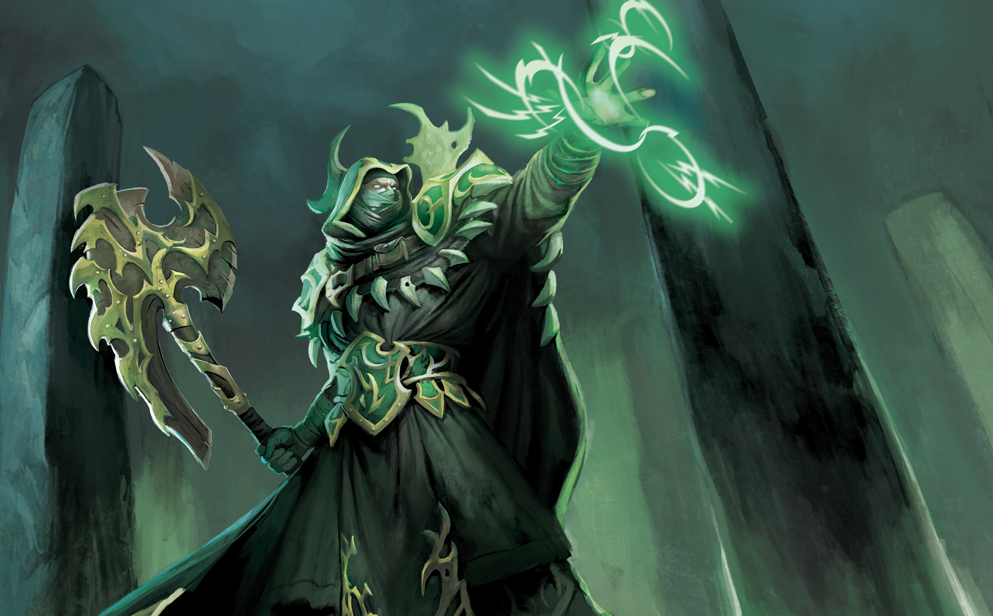 “We’re finally back on the table!”

So let’s say your opponent does manage to get into melee with your Druids. In step Wrong Eye and Snapjaw. Between the Druid’s clouds causing -2 to attack rolls and Star Crossed your opponent is going to need boosted melee rolls to hit anything.

The original tournament lists only have a Woldwrath in Baldur’s battlegroup, but that doesn’t sit well with me. I understand that in this list Baldur1 should be playing way in the back, but I don’t like the idea of only being able to generate four fury per turn. I can also imagine a time where the Woldwrath needs to kill something and has max fury meaning Baldur can’t transfer to him. So in my version of the list, I gave up some solos and brought along a Woldwight. This gives me another transfer target, fury generator and Shield Guard.

Wrapping it all up

My love of Baldur1 is probably pretty obvious by now. The fact that he plays a serious competitive game across all these themes speaks to his solid toolkit and abilities. Next time you’re prepping for an event and need a caster I recommend taking a look at Baldur1 and what he can bring to your list pair.

What do you think? Is Baldur1 going to win the next major event? Or is he outclassed by other options?