Images from this month’s White Dwarf are bubbling across the Internet. Today we find rules and rumors from Gang War 3, for Bounty Hunter Bands, and some spicy Webway Portal details.

This month is shaping up to be an exciting one. Deathwatch is en route, followed closely by Harlequins and some fun updates for Necromunda. All of which you can find in the latest White Dwarf, or right here thanks to the magic of the Internet. Spotted over on miniwars, here’s a batch of pictures for you.

First up we have a look at Gang War 3, which brings with it some pretty significant additions for Necromunda. Im addition to the buggest and baddest trading post with everything from plasma weapons to servo-skulls, they’ve added massive brutes and other beasts. But by far the one that sounds most interesting is the arbitrated campaign–get a GM to run my Nevromunda campaign? Sign me uppppp. 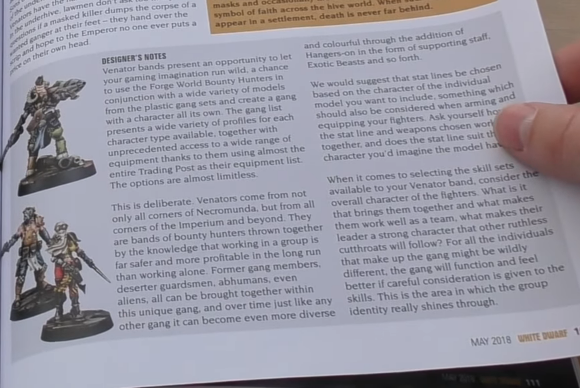 Then of course there are the Venator Bands–essentially a Necromunda “gang” of misfits, aliens, abhumans, and bounty hunters. They are just the sort of hunter that the violent, criminal underhive beckons, like a lightning rod. 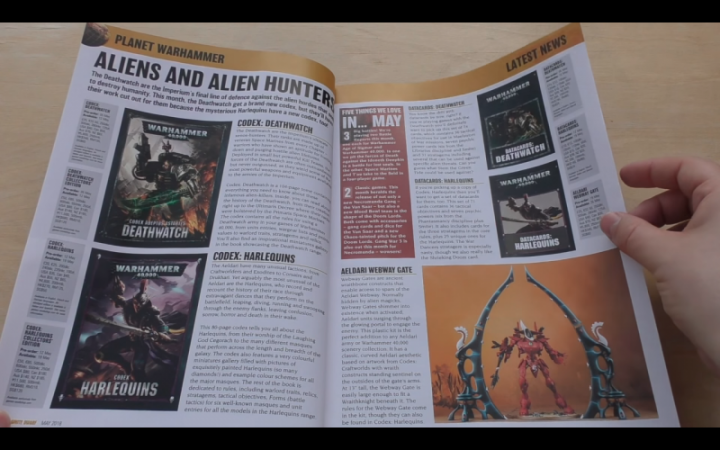 Finally we have the Webway Portal which will soon be bringing Aeldari to a table near you. What’s interesting about this picture is the fact that it’ll be included in Harlequins–this tracks with a rumor from back in April about the codex. Now of course, you should take this with a grain of salt and all–but this same source has successfully called many things about the Deathwatch Codex, so this seems like it has a little more heft to it.

This is the go codex for primaris: they called it the codex Primawatch

– For primaris You can mix unit like this : 5 intercessors ( barebone) + a mix of 5 other miniatures from primaris ( for example agressors, hellbasters, interceptors)

– Stratagem to give sniper rules on death watch unit against xenos . ( they take for example hellblasters sniping synapse tyranid)

– Something to reroll wounds against troops? not precised if stratagem

– They talk about something that can remove tau markerlights? no idea of what type of things that can be

So when that same source, French Wargame Studio cites:

– There will be a Portal Fortification, 120Pts Not under 14HP 3+ 5++ T8, that you will set everywhere on the table but more than 12inch of enemy and more than 6 inch of objective, that will give the possibility to ds units from it, with a strat similar to necron if he is destroyed you can set them. After the portal is destroyed unit are not forced to be more than 9’’ to the enemy. Strongly implied that this unit will be available to aeldari.

– A warptime spell for Harlequin unit

I’m inclined to believe them a little more than usual.

Until next time, just think about all the new ways the Eldar will be able to cheat if that proves true.