Pillars of Eternity II Is Coming, And Critical Role Along With Them 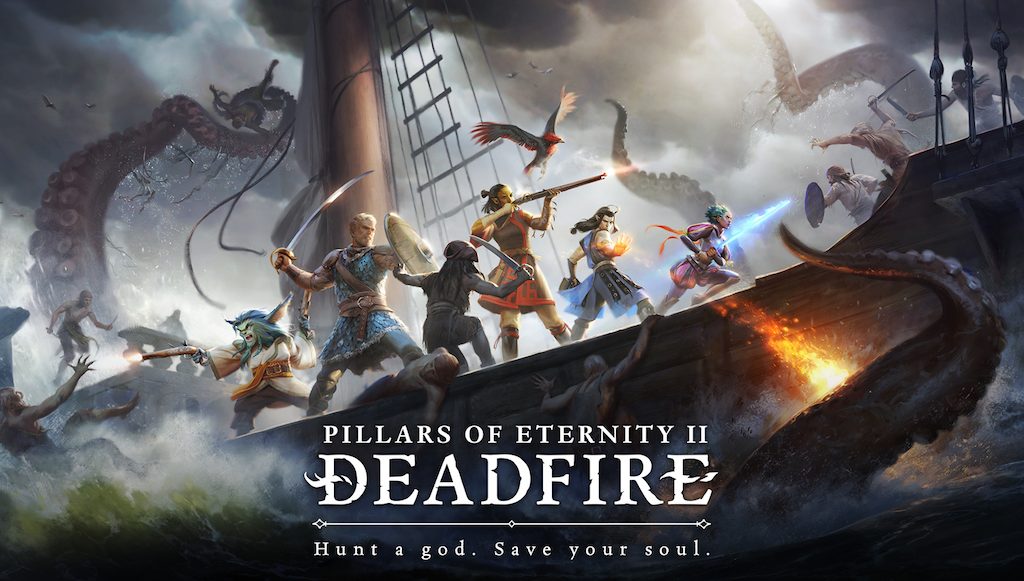 Pillars of Eternity II: Deadfire, is due out tomorrow, bringing solid rpg gameplay and featuring the cast of Critical Role. Which, thanks to Geek and Sundry, you can now reverse engineer their PoE characters into D&D characters, which you could then play in the Tal’dorei setting for a double-reverse inception.

Alright, let’s get down to business folks. Pillars of Eternity II is coming out tomorrow, which means that now in addition the Inner Sphere of Battletech, the world of Eora will be needing saving, and I’ll need one of those Bradley Cooper Limitless Pills to make sure I have enough time to fit all that in. But, while we wait, Geek and Sundry has gone and double-reverse incepted everything, so that now you can play the dudes who play D&D playing some other dudes’ other dudes while you’re playing D&D. Or in words that make more sense, they’ve gone and reverse engineered the companion characters, voiced by the Critical Role cast, and converted them to D&D 5th Edition stats.

So now you can either play them, or use them as NPCs in your campaign, which is something that PoE II has a lot to offer as well. There’s a lot of cross-pollination of ideas, both to germinate into other things, and to just outright steal (any good GM steals from elsewhere). With that in mind, let’s take a look at the cast and characters, who were reverse engineered with the help of Josh Sawyer, Design Director for Pillars of Eternity II.

via Geek and Sundry

First up we have the characters voiced by Matt Mercer–as you might expect from the man who gives voice and life to a whole world (and whose NPCs have a way of becoming the secondary stars of the show), he’s capable of playing a versatile range of characters. And in PoE II he plays 2: The wizard Aloth Corsifer: 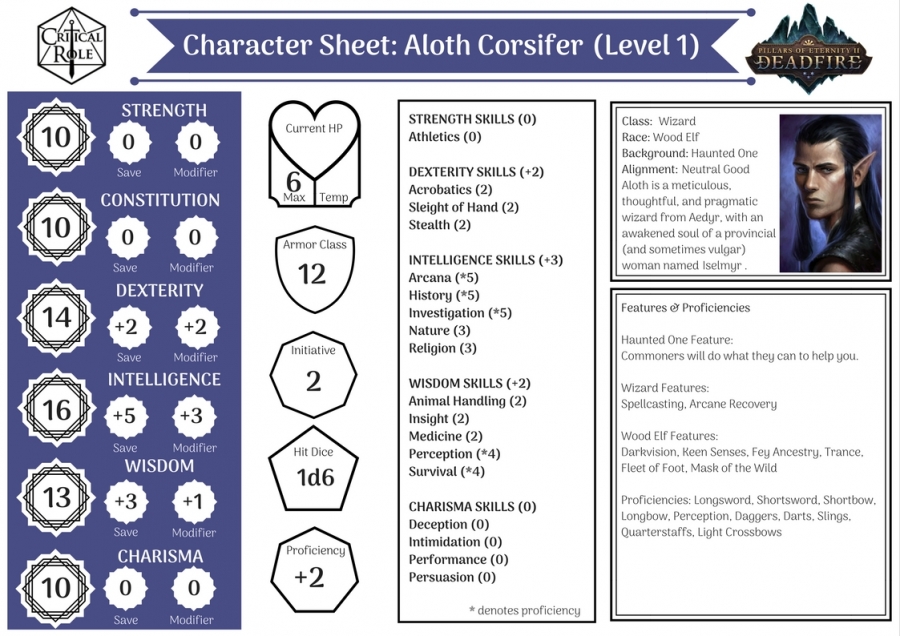 Aloth is a wizard from Aedyr and an old ally from the Watcher’s journeys in the Dyrwood. Meticulous, thoughtful, and pragmatic, his experiences in the years since meeting the Watcher have shaped him. They’ve also brought him to the Deadfire on a mission of his own. With the Watcher’s help, he hopes to uncover the truth behind one of the oldest and most secretive organizations in Eora.

And the veteran warrior-cum-farmer Edér: 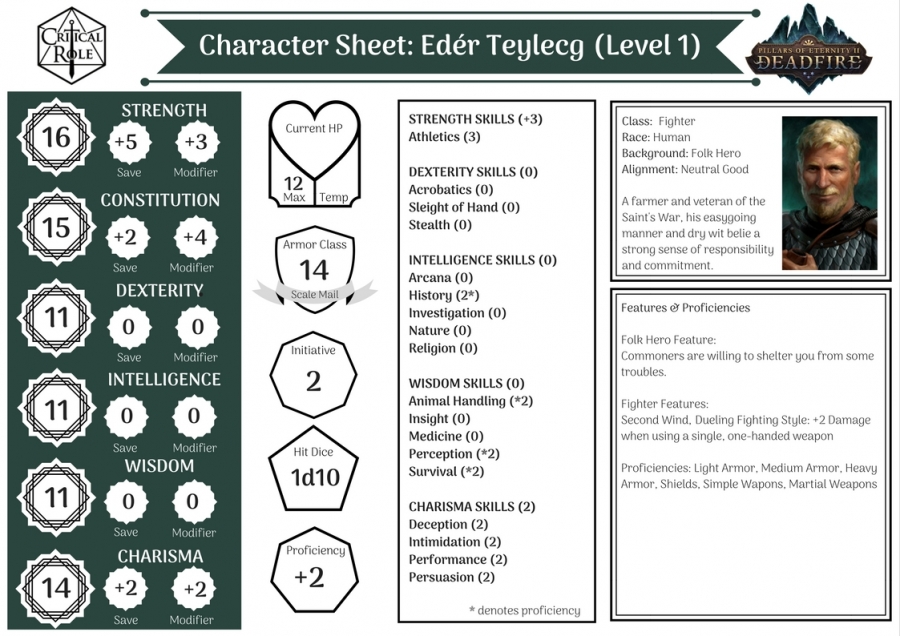 A farmer and veteran of the Saint’s War, Edér fought alongside the Watcher in the Dyrwood and now accompanies his old ally to the Deadfire Archipelago. His easygoing manner and dry wit belie a strong sense of responsibility and commitment. Eothas’ return into the world raises questions for Edér about the god he once worshipped and later fought against.

Then there’s Marisha Ray, who voices Maia Rua, a sharpshooter and sailor: 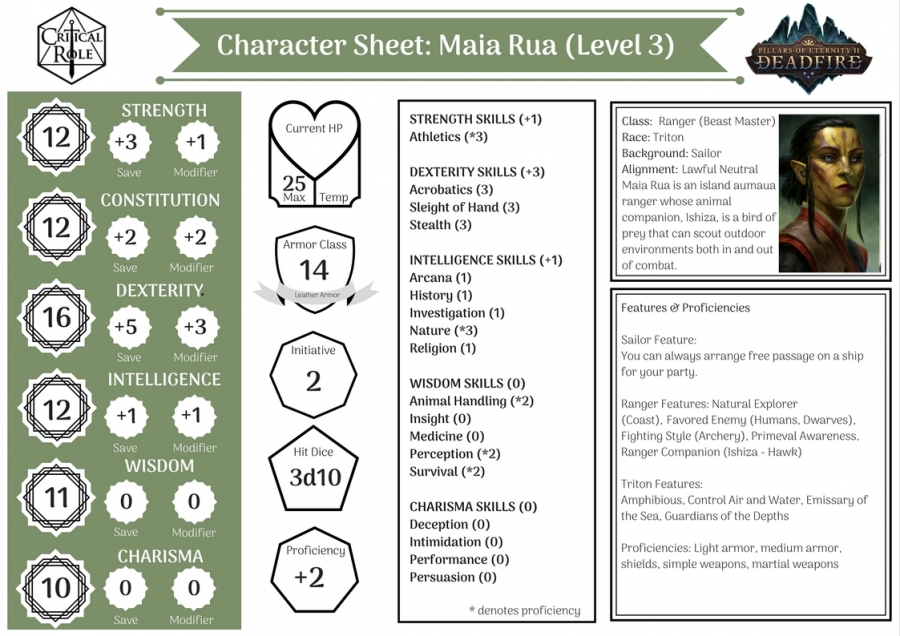 Maia is an elite sharpshooter serving a tour of duty for the Royal Deadfire Company. With the help of her bird of prey companion, Ishiza, Maia can scout environments both in and out of combat. Reassigned from her mission and sent to assist the Watcher, she and Ishiza are grateful for the chance to sail the treacherous waters of the Deadfire for some adventure and target practice. 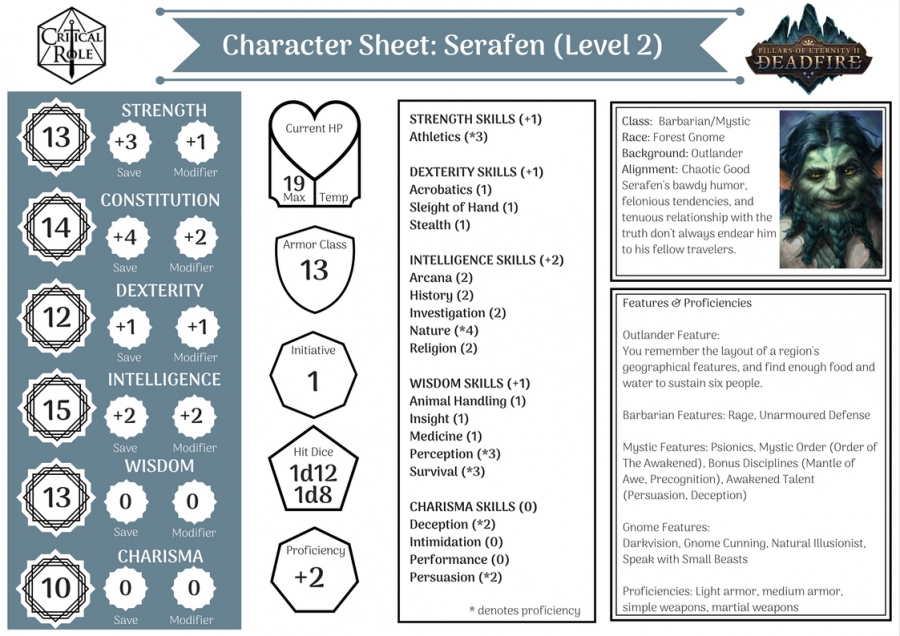 As a shiphunter of the Príncipi sen Patrena, Serafen uses his psychic abilities to guide pirates to merchant vessels ripe for plunder. Serafen’s captain offers the furry blue pirate’s expertise to the Watcher, and Serafen brings with him his unique perspective on the politics and cultures of the Deadfire – as well as a long history of wronged rivals, lovers, and adversaries. A self-proclaimed expert in all things involving his tongue, Serafen’s bawdy humor, felonious tendencies, and strained relationship with the truth don’t always endear him to his fellow travelers.

Laura Bailey voices Xoti, the priestess or monk companion to the Watcher in Pillars of Eternity. 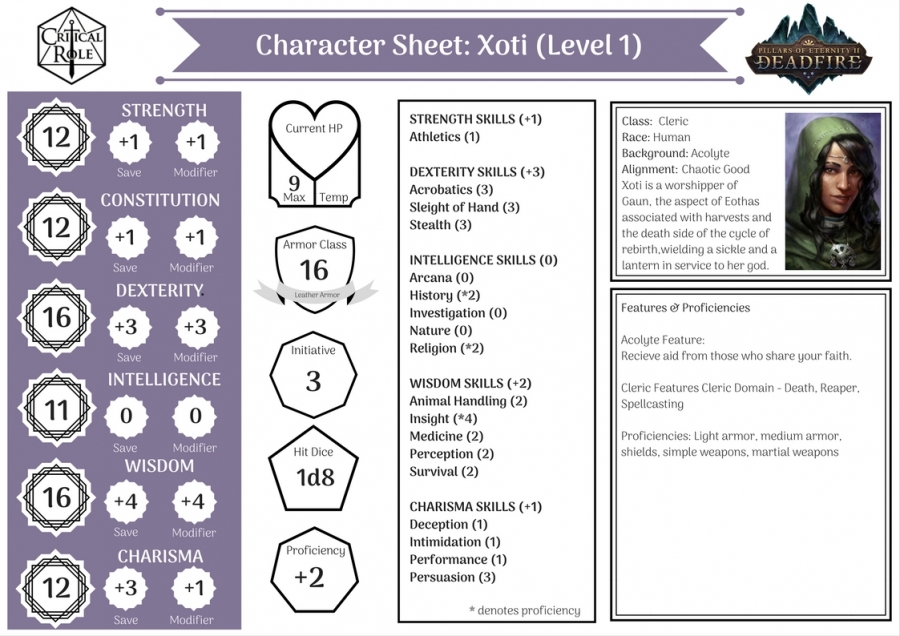 Xoti is a half meadow, half savannah folk priestess who believes it is her divine duty to shepherd lost souls through the Beyond. As a worshipper of Gaun, the aspect of Eothas associated with harvests and the death side of the cycle of rebirth, Xoti wields a sickle and a lantern in order to reap souls for her god. When she was a young girl, she was one of thousands of Readcerans who came to Deadfire fleeing the devastation that followed the vorlas blight and the Saint’s War. Her family, like many others, established themselves as farmers, and it was then that Xoti claims Gaun began to speak to her through prophetic nightmares. Xoti is eager to chase down the manifestation of her god so that she might better understand and aid his mission on Eora.

Travis Willingham, aka Grog, aka half of Jocks Machina gives life to the godlike Tekēhu 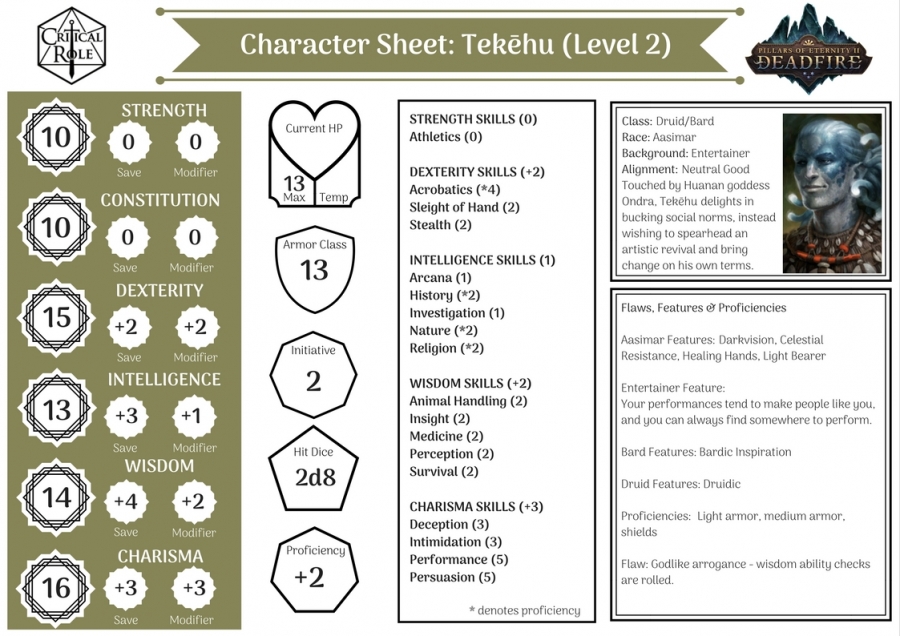 Tekēhu is a marine godlike and accomplished watershaper. While others would harness his talents to intimidate enemy ships and enrich Huana culture, Tekēhu wishes to spearhead an artistic revival and bring change on his own terms. His people have a very rigid idea what it means to be born of a god, so he delights in paddling against the current and defying the wishes of those who seek to control him.

Ashely Johnson gives voice to Ydwin, a tinkerer who blends magic and machinery. 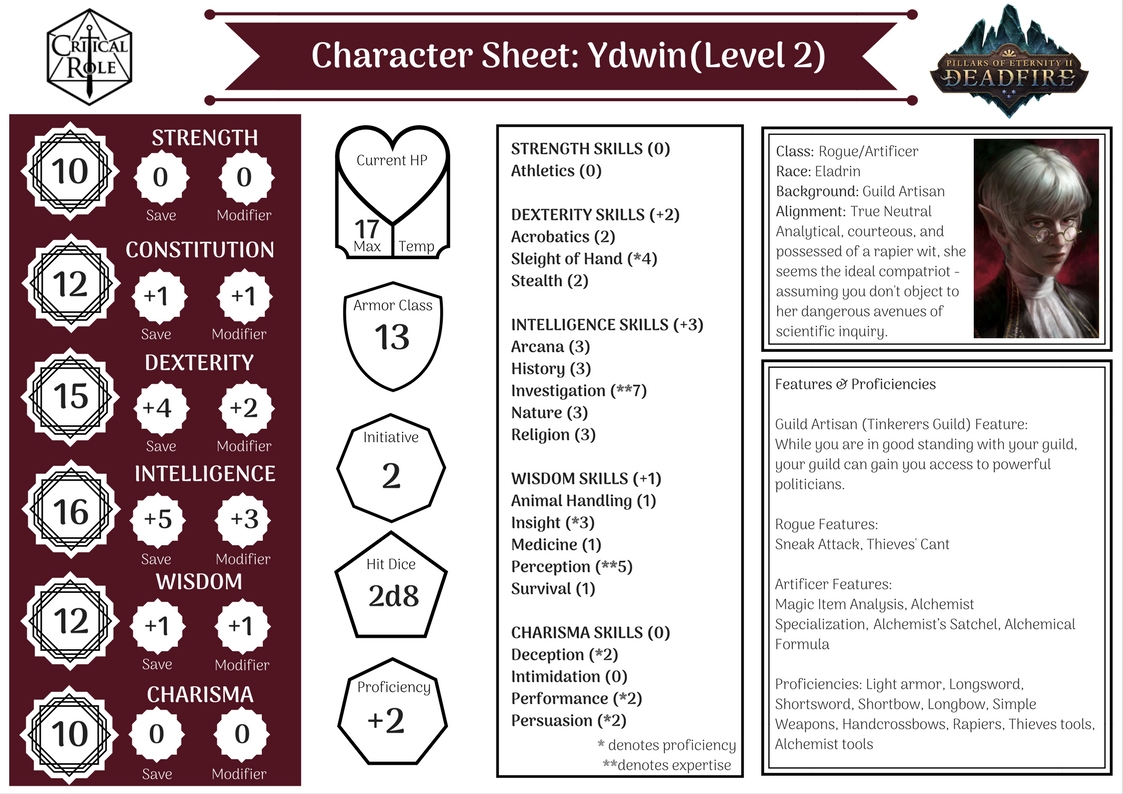 An expert in the metaphysics of Eora and a skilled practitioner of animancy – the wildly controversial science of the soul – Ydwin holds as deep an interest in the Watcher’s abilities as in the living god wading across the Deadfire. Analytical, courteous, and possessed of a rapier wit, she seems the ideal compatriot – assuming you don’t object to her dangerous avenues of scientific inquiry. 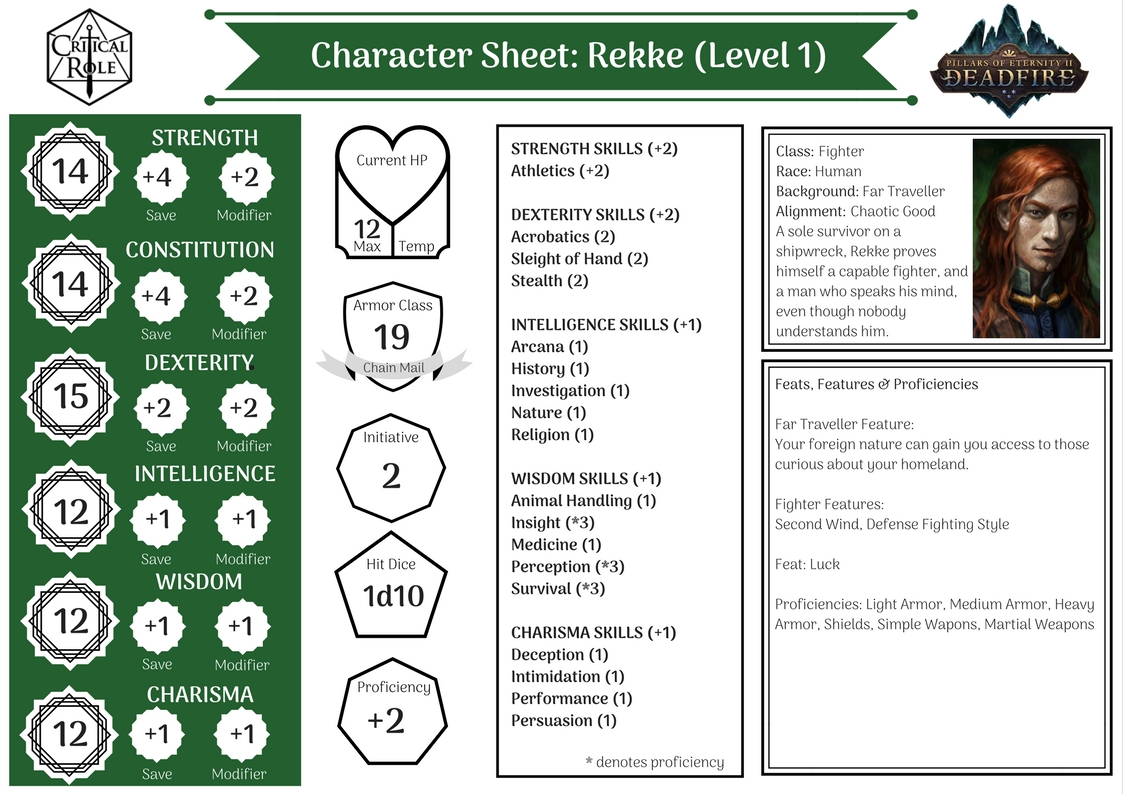 Rekke is the sole survivor of a shipwreck. When the Watcher finds him, he speaks a language none among the party have ever heard before – not that it stops him from speaking his mind. In the Watcher’s company, he quickly proves himself to be a capable fighter and easy-going traveling companion. The youngest member of the party, he amuses himself by playing pranks on his newly found friends.

And though he doesn’t have a character sheet, Taliesen Jaffe who voices the living god Eothas who is a sort of maybe antagonist but who knows?

You can pre-order Pillars of Eternity II today, the game releases tomorrow.

And remember, Pillars of Eternity II also features a pirate ship. Let’s not forget that.

D&D: A Motherlode Of Monsters From Mordenkainen's Tome Of Foes