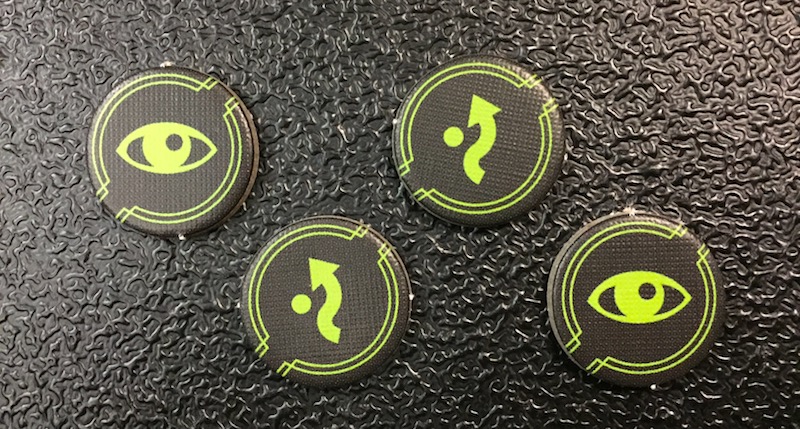 Focus versus evade. Focus versus evade. It’s a timeless battle. If you’re trying to survive more than anything, which action should you take? In X-Wing 1.0, we had a very easy-to-understand rule. In 2.0, things are a bit more complex.

X-Wing 1.0 made evade tokens very simple and very powerful. No matter what your dice rolls, an evade token let you add one evade result. This meant not only could you be sure of at least one evade result regardless of luck, but you could fully evade an attack that threw more dice than you. Particularly for ships (like Soontir Fel) that could stack both tokens, this was very powerful. Generally speaking, attack is stronger than defense and attack mods are stronger and easier to get than defense mods. (This is a deliberate choice FFG made so that ships actually, you know, die and stuff.) Evade tokens were the exception to this rule: a defense mod more powerful than any other, and stronger than most ways to boost attack.

The interesting thing about evade tokens, though, is that they were static. Regardless of how many dice you (or your opponent) threw, regardless of other modifiers, an evade token was always worth one evade result. This meant that there was a breakpoint in its value relative to the focus token. Unlike evades, focus tokens scale: the more dice you throw, the more valuable a focus token is. A focus token is more valuable for a cloaked Phantom (four dice) than a B-Wing (one die), and infinitely more valuable than for a Ghost (zero dice). The average is easy to compute: each die has two eyeball icons. So, a focus token on average is worth one-quarter of an evade result for every die you throw. 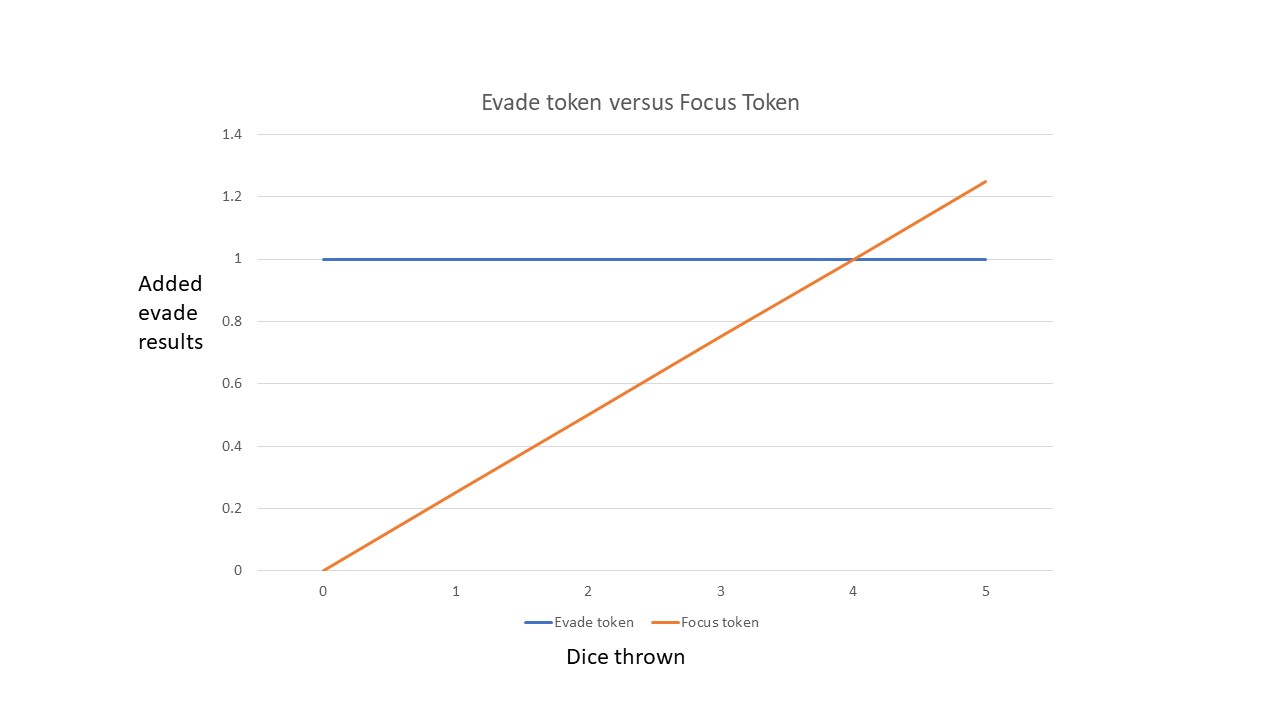 Math nerdness: yes, it’s somewhat subtler than that. A focus token can turn more than one die at a time. This is offset, in the aggregate, by the number of rolls that have no eyeball results. In the corner case that more red dice are coming at you than you have green and you have to not take even one point of damage, an evade token and praying for luck is the only course. Conversely, if you would survive an attack as long as you don’t blank out, the reliability of the evade token might be more valuable than the gross potential of the focus token regardless of number of dice. Generally, though, the rule suggested by the averages suffices for most scenarios. /end tangent

2.0 changes evade token functionality. Instead of adding an evade result outright, an evade token in 2.0 allows the changing of one result, any result, to a squiggle. This means a ship with an evade token is still guaranteed one squiggle, so long as you’re throwing at least one die—and there the similarities to the 1.0 token end. In all other respects, this is a pretty clear nerf. You can’t get more evade results than you have dice. Ships rolling no dice get no benefit from evade tokens. (*glares at the Ghost*) This is also an indirect buff to anti-green-dice tools, like Wedge and Outmaneuver, which previously couldn’t do anything about evade tokens. Now, if you can take away all the defender’s dice, you essentially get rid of the token too.

Here’s another implication of this change: evade tokens scale now. 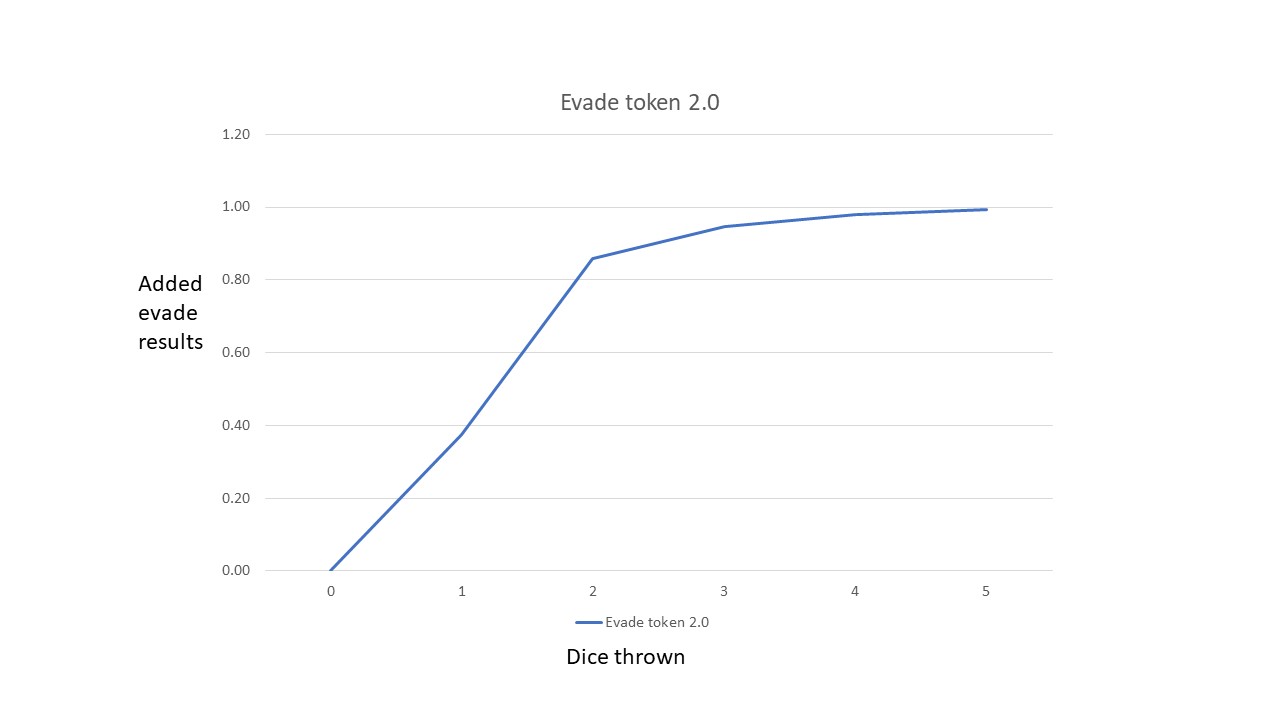 Evade tokens no longer have a static value. The more dice you throw, the stronger they get. This is because the more dice you throw, the more chance you have of rolling at least one non-squiggle result for you to turn with your token. Note: 2.0 evade tokens never quite get to the power level of 1.0 tokens, and you need at least three green dice to approach the same potency.

Where does that leave our breakpoint? 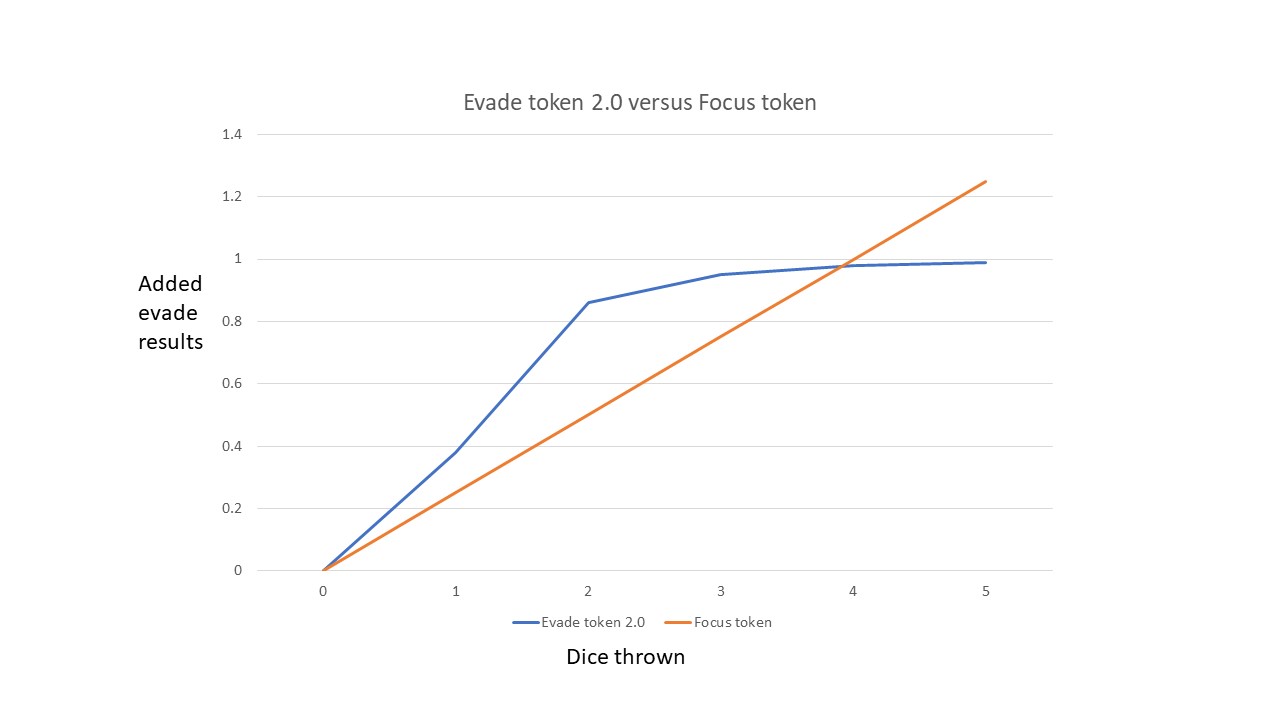 Interesting. The breakpoint is almost the same as before: four dice. (The 2% superiority of focus at 4 dice is sufficiently small that it’s dealer’s choice whether you prefer the reliability of evade or the potential of focus.) Above four dice, the infinite scaling of focus wins out, just as it did in 1.0. Yes, technically the evade token is still scaling too, but the gains at this point are asymptotical—i.e. vanishingly small.

One more graph, and this one shows perhaps the biggest difference between the 1.0 and 2.0 evade tokens. For this graph, we’ll see the potential of having a focus and an evade token together. 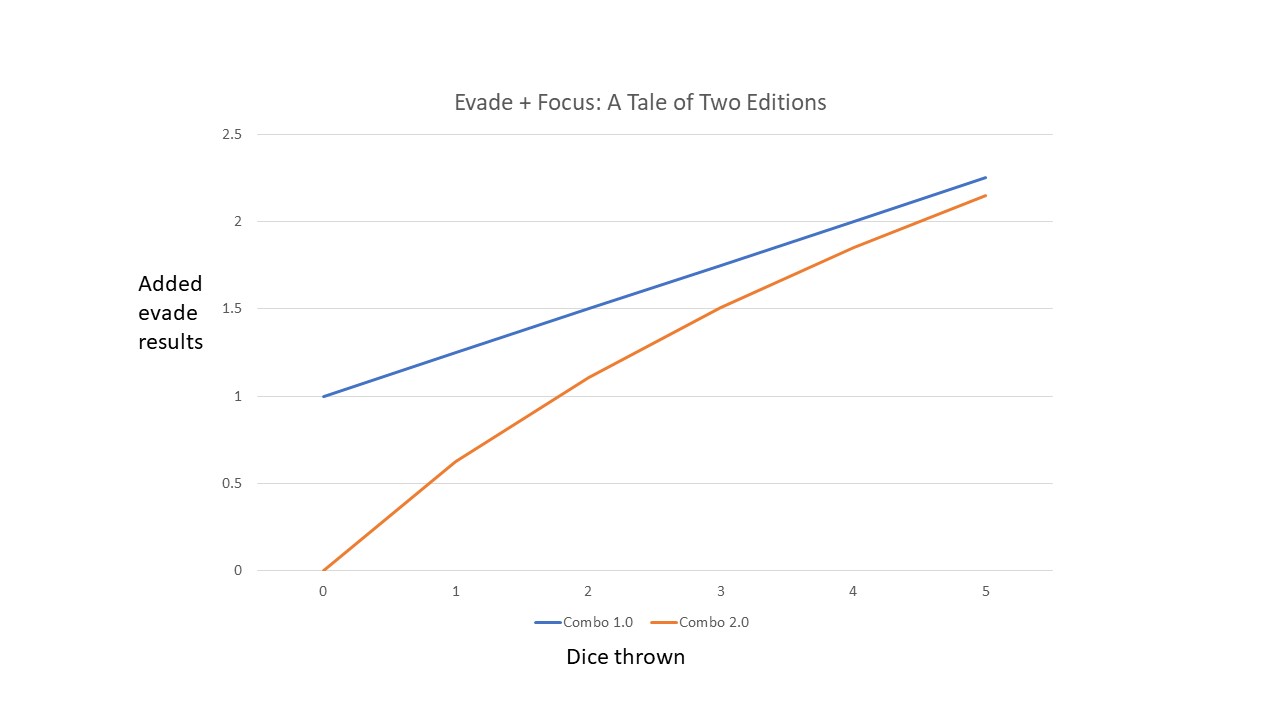 What the hey happened here? Simple: the evade token and the focus token are clashing, diminishing the evade token in comparison to the 1.0 version. Whereas before the evade token was an independent result, now the evade and the focus are seeking to modify the same results. Any eyeball results are results an evade token can’t modify. Now, heaven forbid you roll all eyeballs and can’t use the evade token—oh, woe is me, oh look focus token. Still, the maximum potential of this combination is diminished, especially at low agility levels. Even once you get to five dice, you’re not in the same happy place you could reach in 1.0.