That’s right Loremasters and Loremaster-initiates. Today we come to dispel any lingering rumors, suspicions, fears, or other qualms you might be having that the loyal brothers of the Sixth Legion of the Adeptus Astartes are a bunch of heretics who’ve succumbed to bloodlust, wrath, mutation, and a foul ritual that spreads their vile corruption through potential recruits, creating a legion of traitors ready to strike against the Imperium, even  as they presuppose to, er, hound them at every turn. So lay aside any trepidation as we reassure you that the Space Wolves are loyal.

Now, it’s easy to see why you might, upon first brush, assume that the members of the VI Legion are a bunch of skin-wearing cultists whose sole goal is the spread of the monstrous corruption that infects them all, but rest assured that this is not the case. While it is a matter of established record that there are no wolves on Fenris–those that you see are mutants, changed and twisted by the Canis Helix–and that when you see a marine of the VI Legion draped in furs, he is in fact wearing the skin of his former brethren.

And while it’s true that they force aspirants to join their legion to drink from the legendary Cup of Wulfen–a cup which bears the name of the first of these monsters to turn traitor and attempt to kill their own Primarch–which subjects them to an agonizing transformation as they battle the very corruption inflicted upon them by the “rune priests” who practice fell sorcery with surprising regularity… rest assured the Cup of Wulfen is not an evil artifact, corrupted by the ruinous powers.

Legend says that the cup originally belonged to Leman Russ, the Primarch of the Space Wolves, who gave it to his original followers to drink from. The first man, Wulfen, who was secretly jealous of Russ, drank, and became the first Wulfen, a monstrous hybrid of man and wolf. He leapt to attack Russ, who throttled him with one hand. Russ then declared that all those who were unworthy would become a Wulfen. He would allow any of those who had come to turn back, but none did. Those who drank and survived became the first Space Wolves. Since then, the cup has been kept in The Fang on Fenris, in the care of the Wolf Priests. 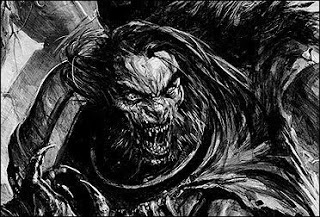 As part of their Test of Morkai – the final ordeal before joining the Wolves – aspirants must drink from the Cup, absorbing the first and most deadly component of the Wolves’ gene-seed, the Canis Helix. While suffering the effects of transformation by the Helix, the Aspirants are then cast outside the Fang, to make their way back to the Fang through the lethal Fenrisian wilderness. Those that fail to overcome the bestial effects of the Helix become Wulfen themselves.

Ah, and the Wulfen…the Wulfen are not to be considered heretical  beasts or mutants that should be purged. In spite of the fact that their enhanced abilities–abilities beyond those granted by the Emperor which are proven to be Right and Just, but the xenos-adjacent hyper-acute senses of smell and hearing, elongated canines that can dent plasteel, and leathery, resilient skin–these same properties risk turning the man who absorbs them into a feral beast, an aspect known as the Curse of the Wulfen among the Space Wolves.

And it’s true that those who drink from the cup are forever cursed. Forever battling their now corrupt internal natures–a literal beast is implanted within their noble human spirits. Even the most stalwart Aspirant might be killed, drinking from the Cup. Those that are not killed revert to a bestial state, hungry for raw meat and blood. During their final trial, the Test of Morkai, the Aspirant is required to make his way back to The Fang through the harsh Fenrisian wilderness, fighting the dehumanizing effects of the Helix. Those who fail to do so become entirely feral and stay in the wild, hunting future Aspirants. Those who succeed and return to the Fang are implanted with the remaining components of the gene-seed, which stabilizes the effects of the Helix. However, even after initiation into the chapter, many Wolves are never entirely free of the Curse, and risk reverting to their bestial state in moments of great stress. Part of the duties of the Wolf Priests is to watch over their brothers in battle, and remind them of their better instincts when they are in danger of succumbing to the Curse.

This is not the face of a Chaos Marine. Remember that always.

But in spite of all of this, the Space Wolves are not monsters. So if you’re thinking that you should purge the mutant and the heretic, worry not, because they definitely aren’t corrupted humans who should be hunted down by members of the Inquisition until every last monster is purged from the records of Loyal Marines.

The Curse of Wulfen is not a Curse, but rather a blessing, obviously, so there’s no need to worry about the fact that IT EVEN HAS CURSE RIGHT THERE IN THE NAME, DO YOU NOT SEE THIS INQUISITORS? DO YOU NOT SEE HOW SOMEONE MIGHT THINK THESE HERETICS SHOULD BE BROUGHT TO THE EMPEROR’S JUSTICE?