Today, Loremasters, we conclude our lecture on the Abhumans, and discover a little something about humanity–notably size matters and that bigger is almost always better.

Gather ’round Loremasters, we have one last batch of Abhumans to discuss, and from these humble few, we may discern a fundamental truth about humanity, good, and the galaxy at large. We posit that size is of the utmost importance, and that it matters not how you use what you have, only that you have more of it than anyone else. It is this truth that drives the loyal soldiers of the Astra Militarum, whose martyrdoms fuel the Imperium–though they may not live to see it. These same principles may be seen in the Adeptus Astartes. These are the Emperor’s chosen creation–I’d say the Emperor’s Children, but that’s a problematic term. Suffice it to say though, these heroes of the galaxy, these defenders of humanity all have one thing in common. They are massive. The same can be said for the Adeptus Custodes, whose might surpasses even the genetic engineering of the Marines.

So it is with this in mind, that we consider the wisdom of the Emperor in his great works. The bigger they are, the harder they will hit your enemies and destroy them. It is why people are said to be larger than life–and why the Ogryn make trusted bodyguards, but the Ratlings are relegated to scullery duties and sniping. But let us learn more of these most diminutive of abhumans, and see what they have to teach.

There are three batches we shall be discussing. The Ratlings, the Scalies, and of course, the Squats. To begin with though, let us address the Ratlings. You might have seen one or two of these scurrying around here, turning up with all manner of missing or stolen goods. And you’ll doubtless find that some of your own items have been requisitioned. This is likely due to the presence of Ratlings.

Ratlings are the smallest type of abhuman, their ancestors having become stunted by thousands of years of inbreeding on worlds with naturally soporific climates and abundant harvests. Ratlings are short and squat, although not strong. They are idle, hedonistic, gregarious, over-friendly and sexually promiscuous. Their lives are spent eating until sick, drinking copious amounts of intoxicating liquids, and procreating uncontrollably. These small, loud, hungry and lecherous creatures are called Runtlings, Stunties, Halflings, Maggots and Ratlings, among other things.

Although Ratlings make generally poor warriors, the Imperium still has a use for them, and they are often recruited into the Imperial Guard as snipers, the one battlefield role in which they excel. In this role they operate independently of the rest of the Imperial Guard force, and are equipped with sniper rifles and flak armour.

Ratlings are also well known for their culinary abilities and often serve as cooks off the battlefield. Some Ratlings take advantage of their position as company cooks to acquire extra supplies to sate their voracious appetites. Others extend these benefits to their foster regiments for a price, their kitchens serving as fronts for their illegal activities. Their abilities as fences, thieves and black marketeers find them acceptance from the men they serve alongside, as they offer a wide range of goods, from extra rations, to drugs and alcohol, and even non-standard issue weapons common amongst veteran soldiers. 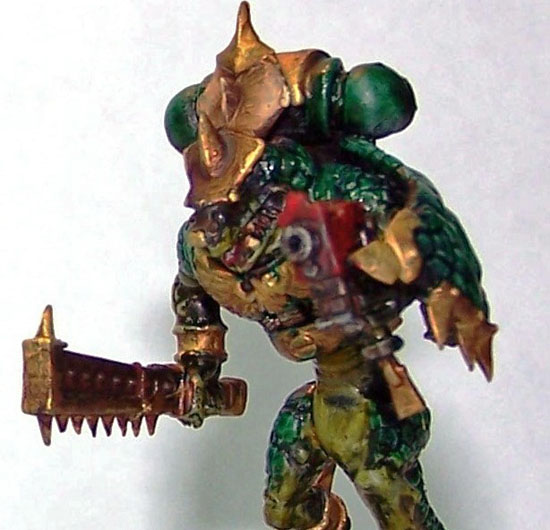 Scalies, on the other hand, are a mutant strain of abhuman found in the underhive which have stabilised over time, although there is still a lot of variation, and are not as stable other abhumans found in the Imperium, like Ogryns and Ratlings. Scalies are massive reptillian mutants almost as broad as they are tall. Their durability and strength are legendary among the people of the Underhive and have a fearsome reputation. Like some reptiles they have the abillity to regenerate lost limbs and their thick skin acts as a natural armour.

They are rarely seen but it is said that they are by far the most numerous denizens of the Underhive. They are undoubtedly intelligent but seldom speak due to their twisted mutated necks and voice boxes having changed beyond the ability of normal human speech. So little is known about their origins or if there are hidden clans or tribes of Scalies in the most severely polluted badzones in the Underhive.

When fighting they often use close combat weapons and discuses or throwing axes. They are also used as heavy weapons men by Scavvies using portable bolt throwers called Spear guns or Scatter Cannons, a large form of blunderbuss. 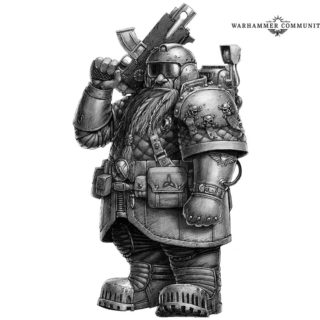 Finally we have the loyal, dependable Squats. They move through the galaxy like clockwork. Of all the abhuman types, the Squats most closely resemble humans. Squats were the descendants of humans who colonised the worlds around the galactic core in the far distant past. These worlds are some of the oldest in the galaxy, formed when the laws of physics had yet to be stabilised.

The Imperium first encountered the Squats during the age of reunification called the Great Crusade as the Emperor’s forces reached the worlds near the galactic core. Many of these worlds were the Squat homeworlds. Stubborn, insular and fiercely independent, war between the Squats and the Imperial forces was inevitable. High casualties suffered by the Space Marine Legions led to the development of the Mk. III Power Armour, suitable for the conditions being fought in – confined tunnel complexes with little cover.

The Squat homeworlds have long been part of the Imperium, but enjoy a level of autonomy greater than the ordinary self-governed Imperial world. The Homeworlds, while governing themselves without interference from the Adeptus Terra, are expected to follow Imperial policy on wider issues. The relationship between the Homeworlds and the Imperium is generally peaceful, although through history has been punctuated by bouts of war and bitterness. The Squats and the Imperium trade to their mutual benefit. Both races also share many enemies, especially Orks, making it in their best interests to cooperate. The Squats do not follow the Imperial Cult, rather they revere their ancestors. Squats fighting alongside the Imperial Guard often adopt the Emperor into their beliefs, as a guardian of their ancestors.

And there you have it. From these diminutive abhumans, take the lesson that treachery and faith may appear anywhere. But if someone is bigger than you, they are likely better than you.

Any sentiments that this seems to hold true for Orks is utterly preposterous and likely heretical–they do not share anything in common with humanity, least of all a respect for strength and size.