40K: Warhammer Conquest Is The Perfect Guide For New Players

With the first two issues of Warhammer 40,000: Conquest out in the wild, and subscribers now saddled with a squad of Intercessors and Plague Marines, GW introduces Conquest TV, which is all set to bring new players into the fold.

There’s even a guide to take players step by step through their first game. It’s quite informative, and surprisingly charming. Their host does an excellent job of explaining even the most basic concepts–align these pins, push them together. Here’s how you safely clip miniatures. Here are the rules for moving your miniatures around the board, and here’s how you handle shooting things.

The back and forth of 40K is very patiently explained, and made incredibly accessible. Clearly these early subscriptions are aimed at total newbies, the first game you’ll play only features movement and shooting, and the ensuing wounds and armour saves. The advanced rules aren’t shown off in this video, but they do include plasma weapons, rapid fire, and assault. But they’re optional. 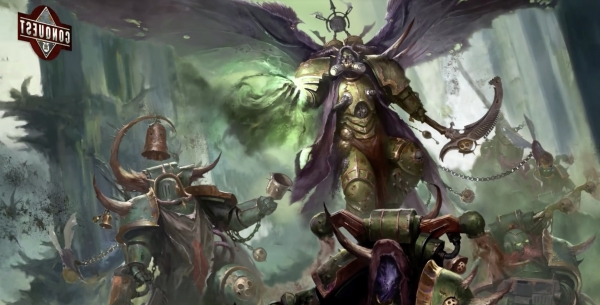 This is designed, from the ground up, to be accessible to new players. Every aspect of the hobby is on display. Building, painting, the game itself–even my favorite part of it, delving into the lore. In the video, mention is made of learning the secrets of the plague marines, and so much more. There’s an entire galaxy out there awaiting you, if you’re new to 40K. And if you’re not, there’s a lot that you can still gain, it’s always fun to revisit the basics, and these models are a whole heck of a lot cheaper to get via subscription. So whether you’re new to the game, or a veteran player who’s just collecting a new army of intercessors and the like, Conquest has a lot to offer.

What do you think of these new videos? What else would you want to see within them?

40K: Behind The Scenes of Kill Team Rogue Trader