Games Workshop has released a rules dump for the new Beast of Chaos Battletome. Apparently you CAN teach an old Beastman new tricks!

Yesterday we took a good look at the Beasts of Chaos and their Allegiance Abilities. Get ready for some outflanking shenanigans. But today we’re taking a closer look at a TON of new unit rules for these Sons of Chaos. If you liked the army before, you’re going to love them now – and if you didn’t, well, get ready for a fight when you see them across the tabletop! 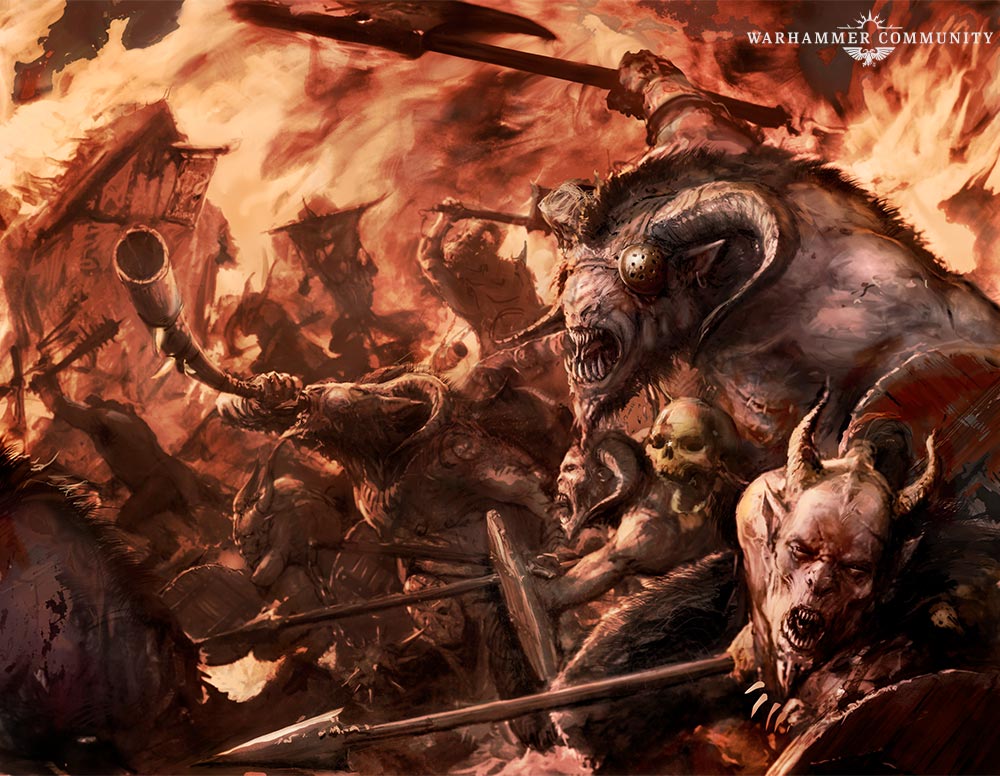 One of the Bread-and-Butter units for the Beastmen has always been Bestigors. It could have been Gors, Ungors, or Whatever-gors, but Bestigors are, well, the BEST ones. And now they are even better. With their Despoilers rule, they get to re-roll hit rolls of 1 when attack units with 10 or more models. Oh and if you’re an Order Unit, they just get that all the time. 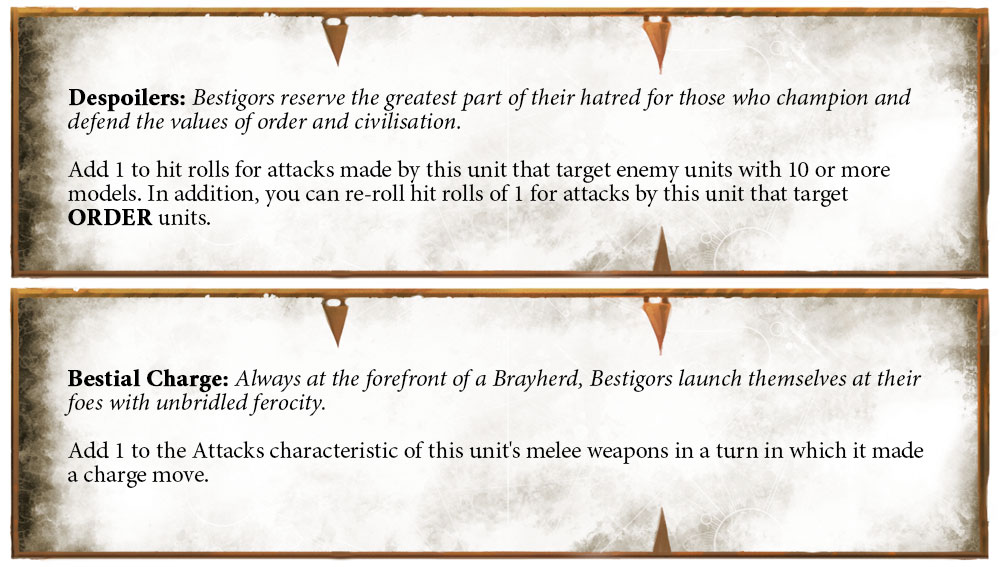 Bestial Charge also allows them to get a bonus attack when they pull off a charge! That going to add a lot of damage potential to these units so watch out for Bestigor Herds in large packs…

No, not THOSE Gargants – these guys are probably better know as Chaos Giants. They are those lovable oafs that sometimes fall over and crush things. Well now the Beasts of Chaos can make them a bit more effective on the battlefield with Whipped into a Frenzy:

Another contender for the Heavy Weight Monster Belt, Ghorgons have gotten some love in the new book for sure. These Four-armed monstrosities bring the pain in new ways – one in particular allows you to EAT an enemy model whole:

A criminally under used unit in my opinion, the Dragon Ogors are back and meaner than ever. They got a new profile that ups their accuracy and make their opponent’s pay:

Dragon Ogor Shaggoths are the answer to the question “Should I take a Monster, Wizard, or Hero?” They are a trinity of all three in the new book and even have their own lore as well. Within that lore is Sundering Blades which seems like it’s going to be pretty good for pretty much any unit that gets it:

Oh Bullgors. I remember when this model was first released everyone was pretty much in agreement that maybe the sculptor on this one missed the mark on the model from the knee down: 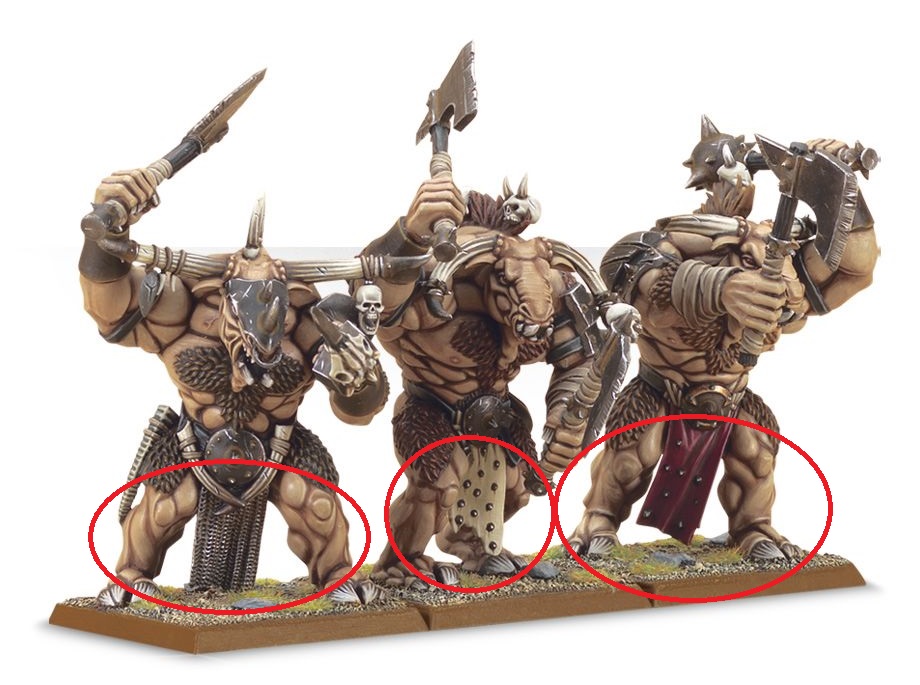 I mean, good on them for not skipping leg day and all…but I feel like they got a little carried away. Anyway, these slabs of beef are back and hopfully have some new rules that help you look at what they can do vs what they look like. They are going to be able to regen (thanks to the Allegiance Abilities – as multi-wound models they might actually be able to use them). Plus they got some more attacks in the new book AND have a fancy new way to deal out some mortal wounds:

Well, well, well look who decided to rejoin the Brayherd party! Centigors got a tweak to their profile with more attacks plus they got Drunken Revelry:

No, that’s not a misprint. Tzaangors have GOR in the name so that means they are in the Beast of Chaos book. Plus they got a bit of a points dip so that’s a nice bonus. 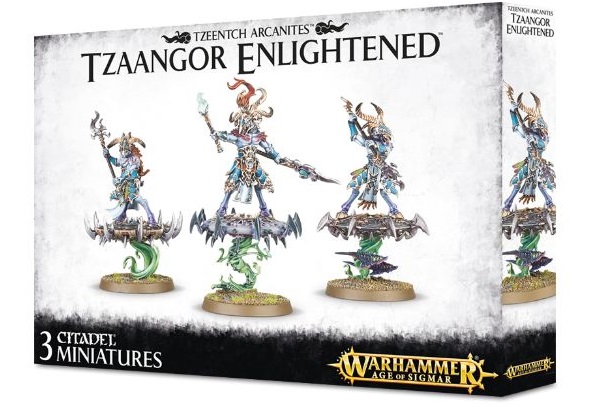 With new spell lores to sling as well as those Endless Spells on the way, it’s the perfect time to look into the changes that are coming for the Great Bray-Shamans. GW previewed two of their new spells and they are pretty wicked looking. Tendrils of Atrophy forces the target unit to subtract 1 from their save rolls which is always helpful: 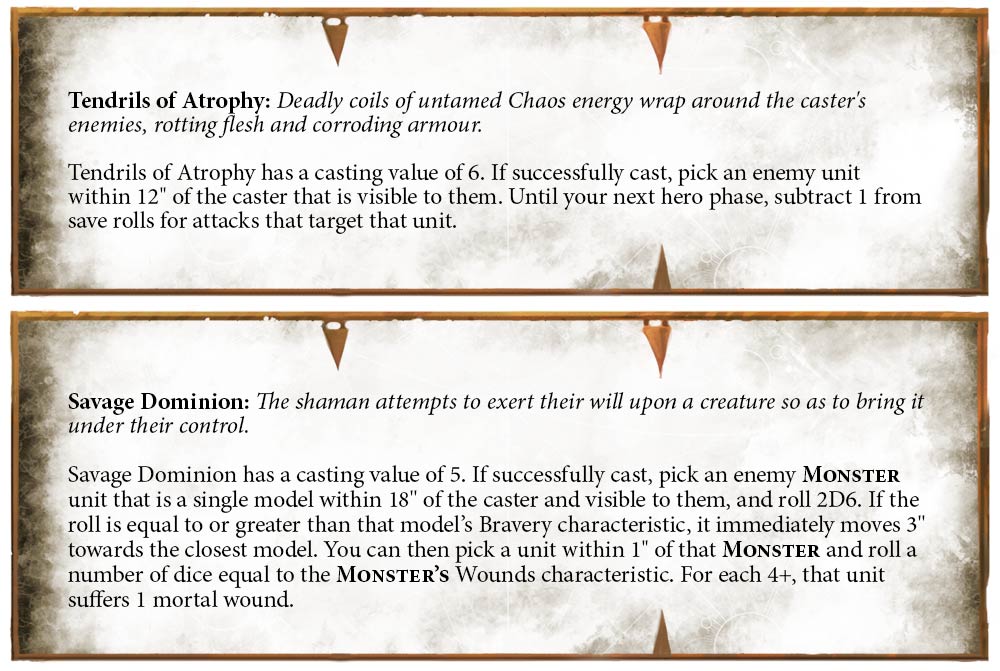 Savage Dominion is going to be one sneaky spell in their toolbox. It allows you to potentially take control of an enemy Monster, move it 3″ towards the closest model and then toss out a bunch of potential mortal wounds. For example, if you tossed that at a Lord-Celestant on a Stardrake that’s 16 wounds on it’s profile. You’re chucking out 16 Dice and any 4+ rolls are a mortal wound on a target unit within 1″ of the model. And that’s not even the biggest Monster in the game – I’ll let your imagination run with that one.

The Beasts of Chaos are going to bring the pain. You could say UDDER destruction is on the way.

Author: Adam Harrison
Writer, Editor, Texas Native, and Austinite for 15+ years, Adam covers all things Tabletop Gaming. Which includes Warhammer 40,000, Age of Sigmar, D&D, Board Games and everything else that involves dice, boards, cards and a table. A hobbyist, player, and collector of miniatures and games, Adam's current obsession are his Death Armies for Age of Sigmar, his Blood Angels and Tyranids for 40k, and his ever growing Arkham Horror: The Card Game Collection.
Advertisement
Age of Sigmar AoS Chaos Beastmen Games Workshop Rules Tabletop News
Advertisement