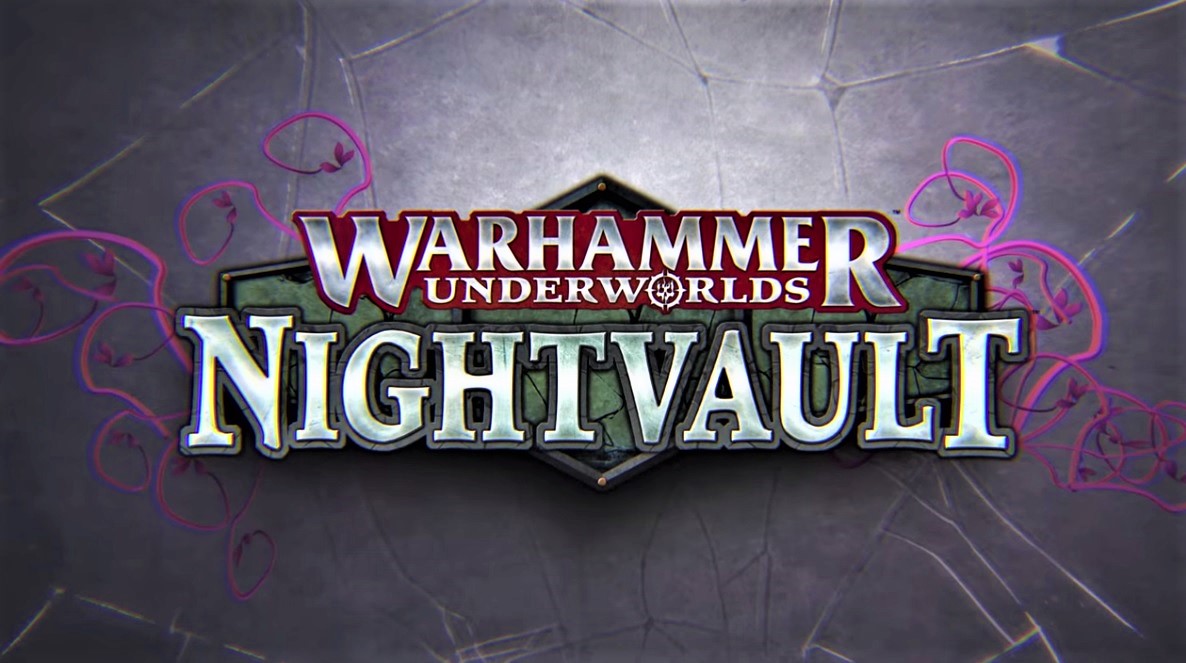 That’s right friends. It’s time to venture into the (Warhammer) Underworld(s) because we’re once again visiting the shadowy realm where there is only one true god of death, but the last time somebody said “Not Today” to Nagash they ended up twisted into a bone golem that ended up destroying the very thing they were trying to protect. Full of poetic irony, is Nagash.

At any rate, today we’re here to look at Nightvault, which is the next expansion for Shadespire aka Warhammer Underworlds, the highly competitive miniatures skirmish game. This expansion adds new characters, new terrain, and expands the base game already. Check it out. 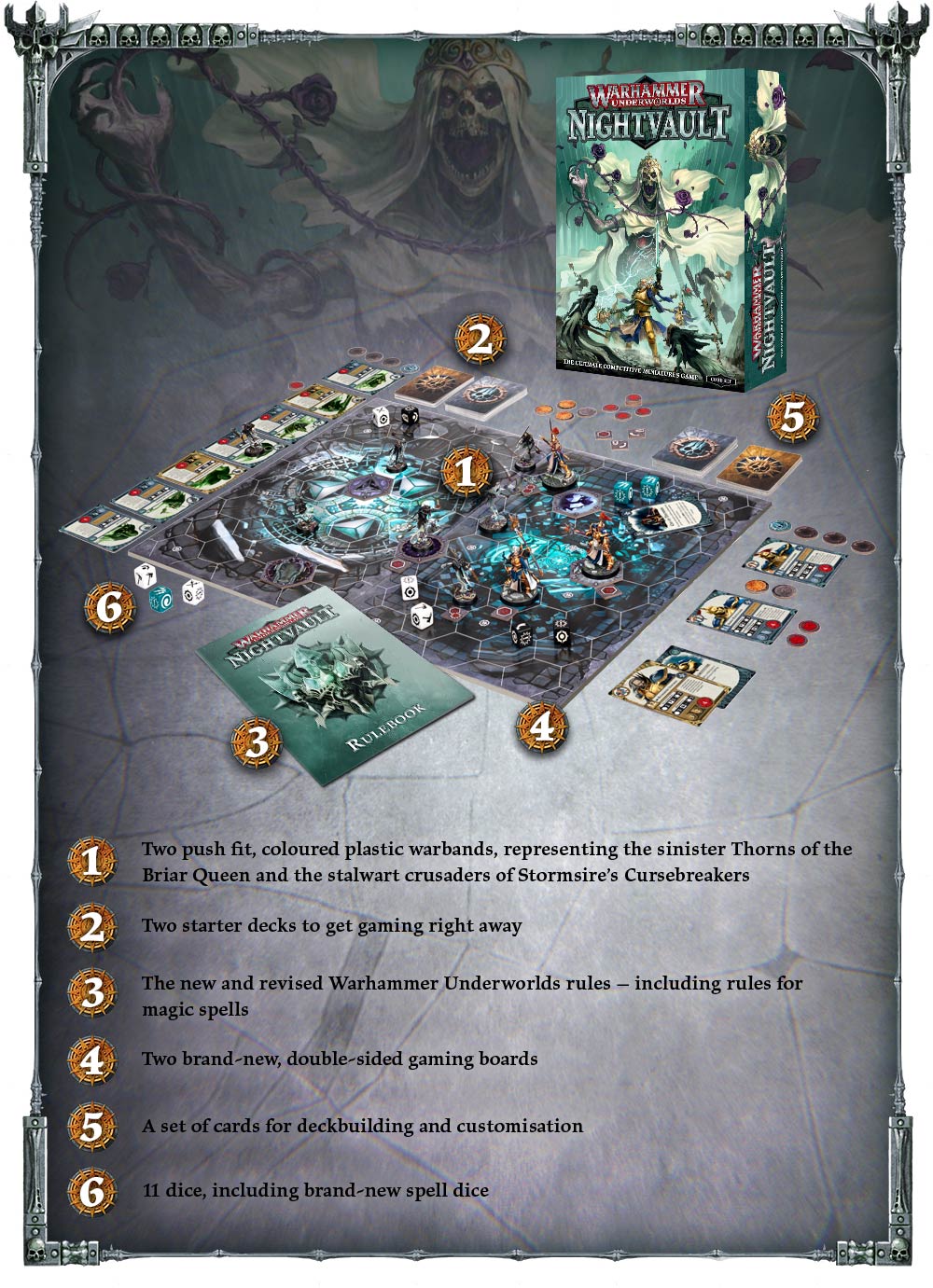 Nightvault will be kicking off with a jam-packed Core Set – your essential first step into the new season. If you’ve never played Warhammer Underworlds before, this set contains everything you need to get started. 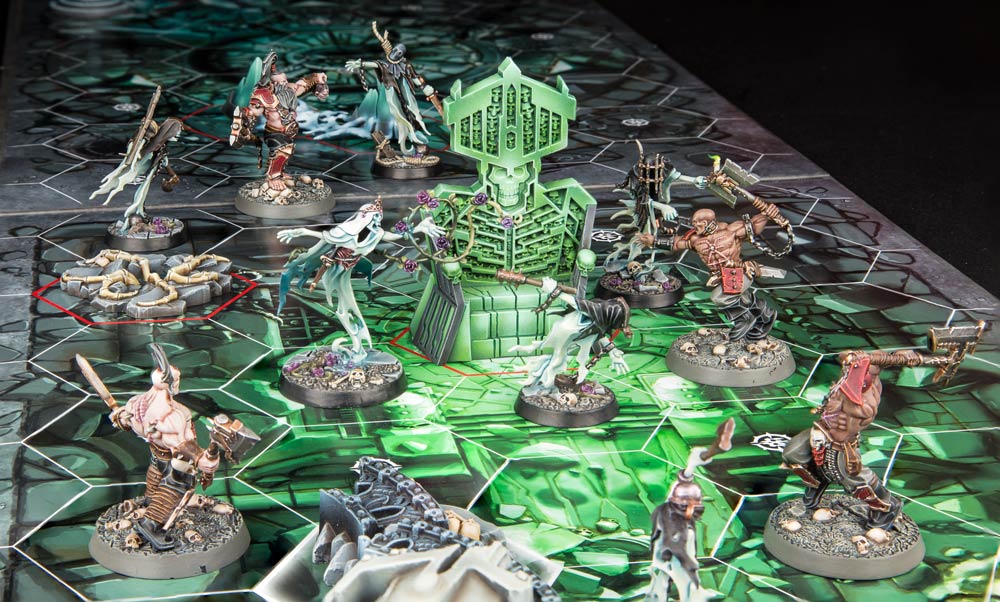 The new warbands for Nightvault are a fantastic peek into the Sacrosanct Chamber and the Nighthaunt, offering characterful takes on two factions we saw radically reinvented this summer. The Thorns of the Briar Queen feature some truly macabre Nighthaunt, from the appropriately named Ever-hanged to spectral jailor Varclav the Cruel. Meanwhile, Stormsire’s Cursebreakers surge with dynamism, energy and personality. You’ll be able to add these guys to your Warhammer Age of Sigmar armies soon with a set of free warscrolls. 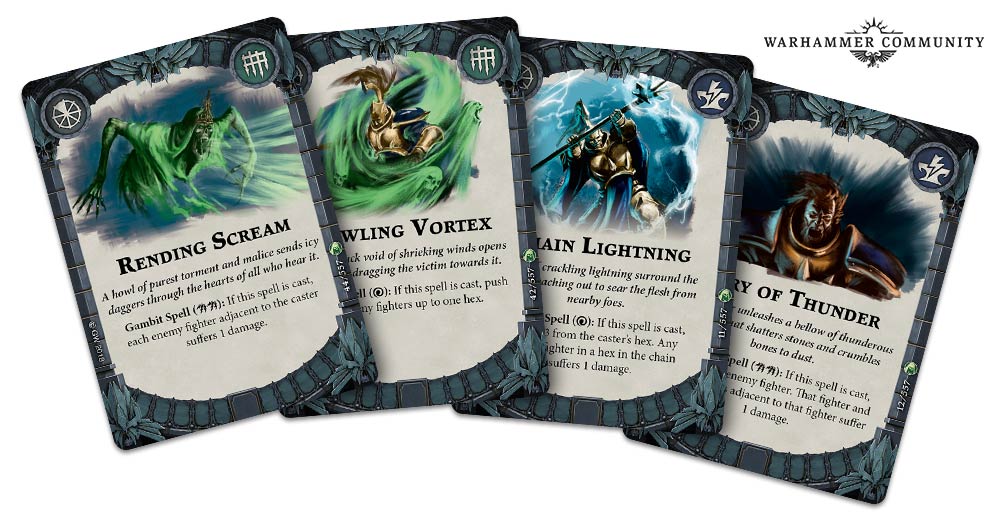 And as you can see from some ofthe cats pictured above, there’s a lot new to play with. Whether you’re looking for playstyles that require a lot of finesse and the ability to dream big, or to try out the new spells–which add another layer of complexity to the game. 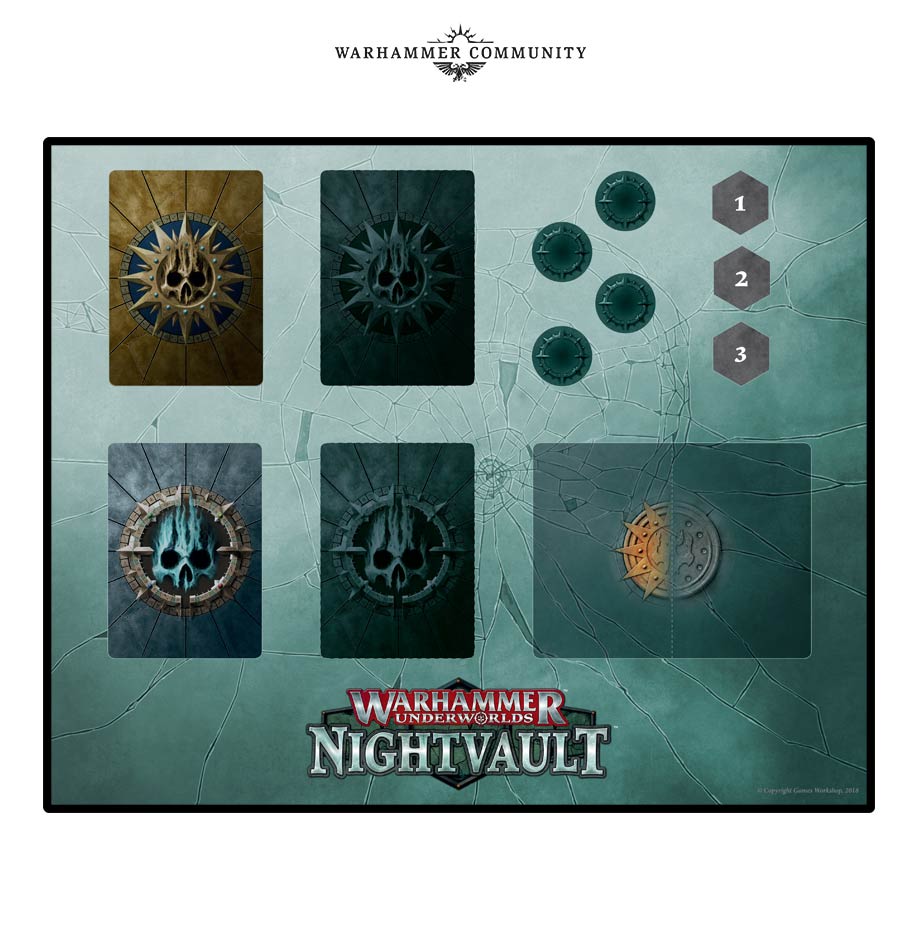 And of course, there’s all the accessories you would expect to accompany a launch like this, tokens, pips, a playmat–but the most exciting part is the 3D terrain that’s coming along with it. 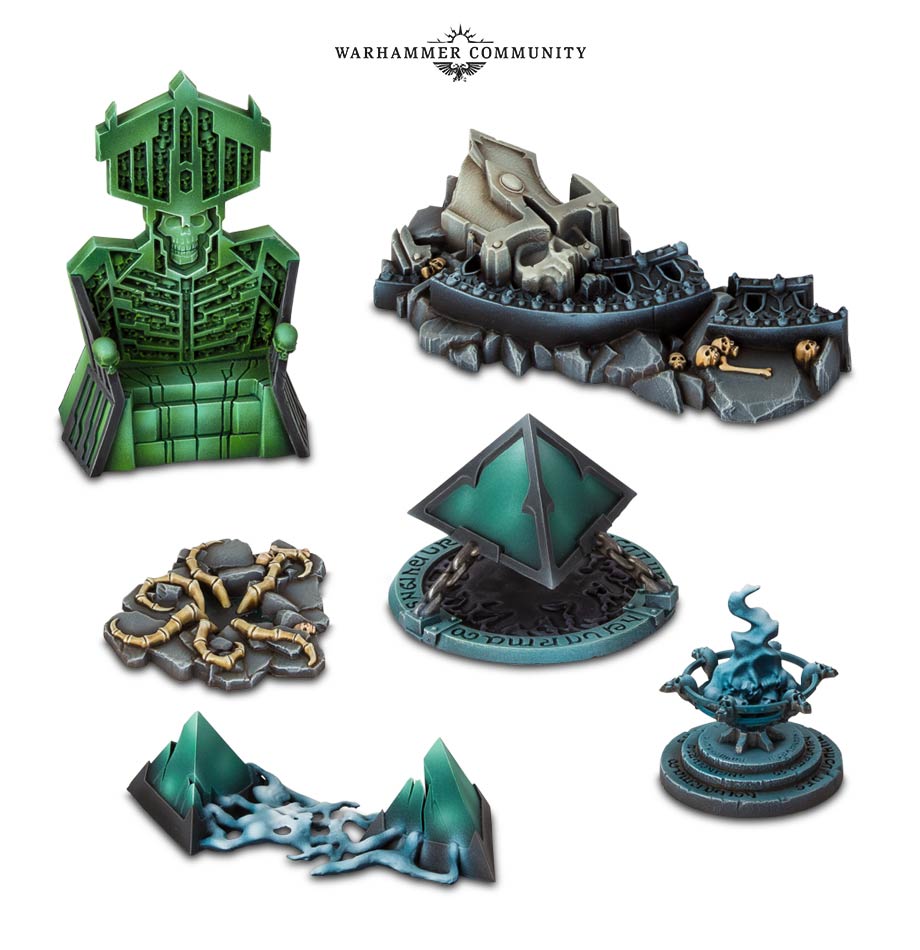 Finally there’s a preview of two new miniatures who will be accompanying the new factions due out soon. 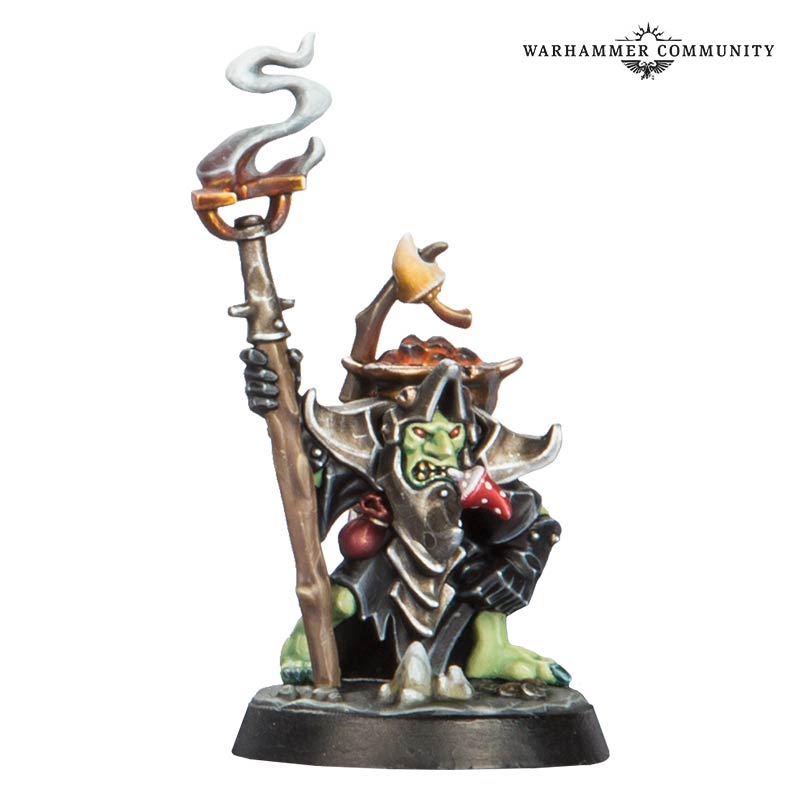 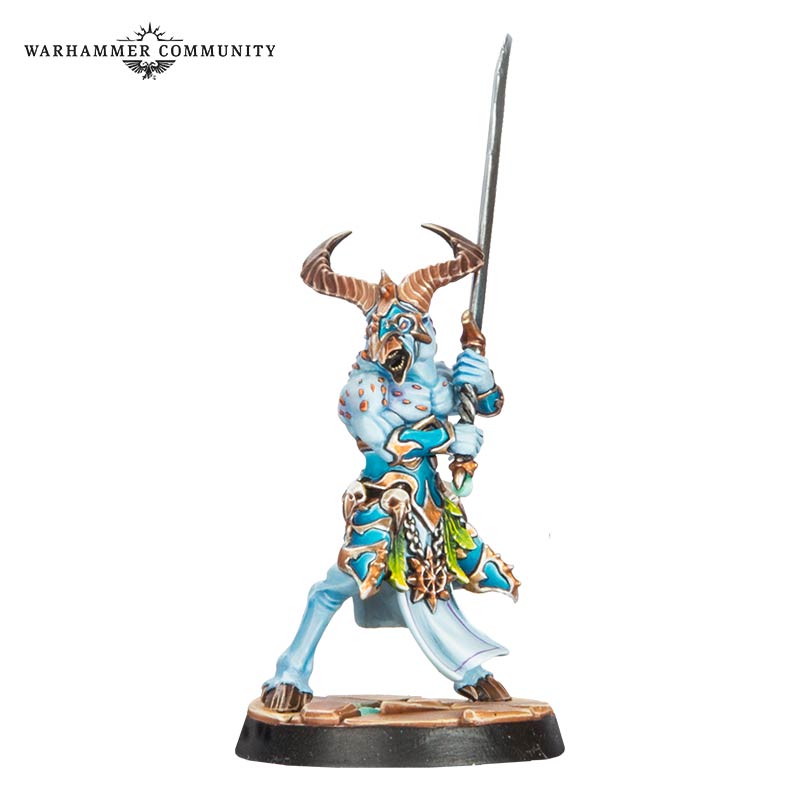 Looks like we’ll see Tzeentch and the Moon Clan reaching for the treasures of the Nightvault.

Makes you wonder what’s in the Dayvault? Maybe the Afternoonvault?