Games Workshop has a batch of Specialist Games miniatures up for Pre-Order this weekend. Bring on the Reavers and get your ‘stank on with Nurgle’s Rotters! 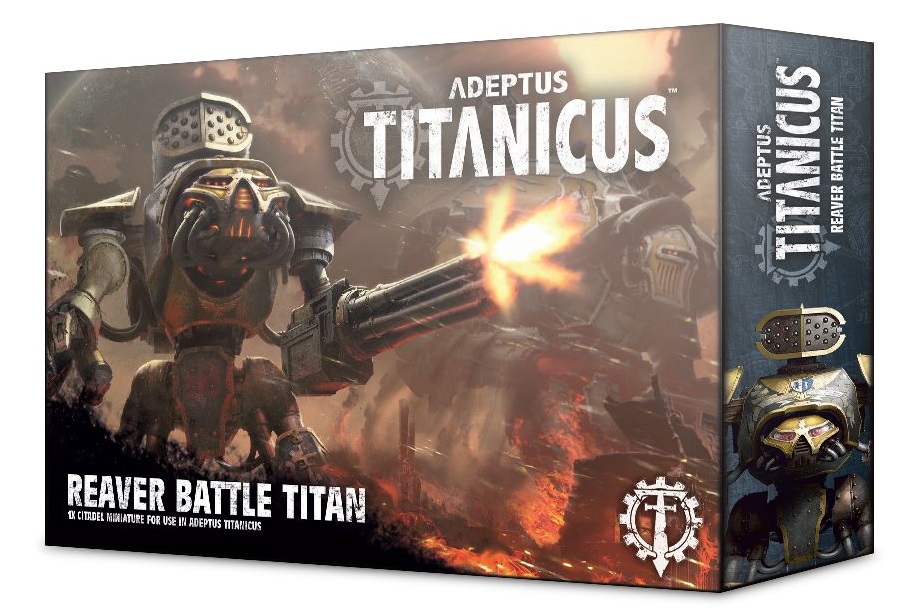 A gargantuan war machine, the Reaver Titan is one of the most common and destructive classes of Battle Titan. Armed with devastating weapons and able to crush enemies under its tread by the score, the ground shakes as the Reaver advances and the enemy is left with a choice: flee or die. Reavers are the heart of the Titan Legions, holding the line or leading the charge as their Princeps demand.

This multi-part plastic kit contains the components necessary to assemble a Reaver Battle Titan for use in games of Adeptus Titanicus. Particularly aggressive-looking, even compared to its contemporaries, this highly-detailed Titan is easily recognised by its flattened face profile and angular carapace. It comes armed with several weapon options – a laser blaster and gatling blaster are available, with a power fist that can be modelled either clenched or open. Above the carapace – of which 2 are included, 1 blank – resides an apocalypse missile launcher, either side of which are the shoulder pads (3 sets are included, 1 set loyalist, 1 set traitor and 1 set blank.) Further modelling options include the knee pads – 2 of these are blank, with 1 depicting the symbol of the Opus Titanicus.

This kit comes as 122 components, and is supplied with a Citadel 105mm Oval base along with a decal sheet – this features heraldry for the following Legios: Gryphonicus, Fureans, Astorium, Atarus, and Mortis. 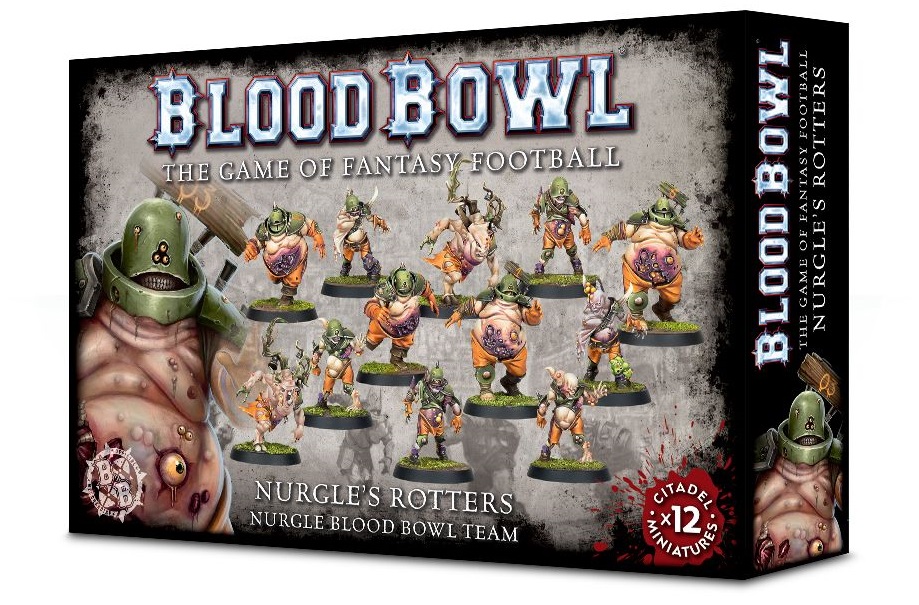 The Rotters rose to fame long ago, having the distinction of being one of the earliest Chaos teams on the circuit to dedicate themselves to a single Chaos god – Grandfather Nurgle himself. Their patron was delighted, lavishing gifts and mutations upon his favoured followers. Today, despite numerous recent setbacks, the Rotters stand poised to once again spread their influence across the leagues and tournaments of the world, bringing Nurgle’s blessings to lands far and wide…

This multi-part plastic kit contains the components necessary to assemble Nurgle’s Rotters, a particularly foul and dripsome Nurgle team for use in games of Blood Bowl. Appropriately putrid and ‘orrible, each player is mutated and pus-covered with exposed guts, claws and warts featuring heavily. The team consists of 4 Bloaters, 2 Pestigor and 6 Rotters.

There are a host of extras in the kit – 2 turn markers, 2 double-sided score coins in the shape of Nurgle’s icon and 4 balls – 2 of these are being chomped upon by a cheeky Nurgling, and 2 have… something… emerging from them, all gribbly teeth and eldritch horror. Supplied with 12 32mm Blood Bowl bases, a 1,000,000 GP roster and a Nurgle transfer sheet. 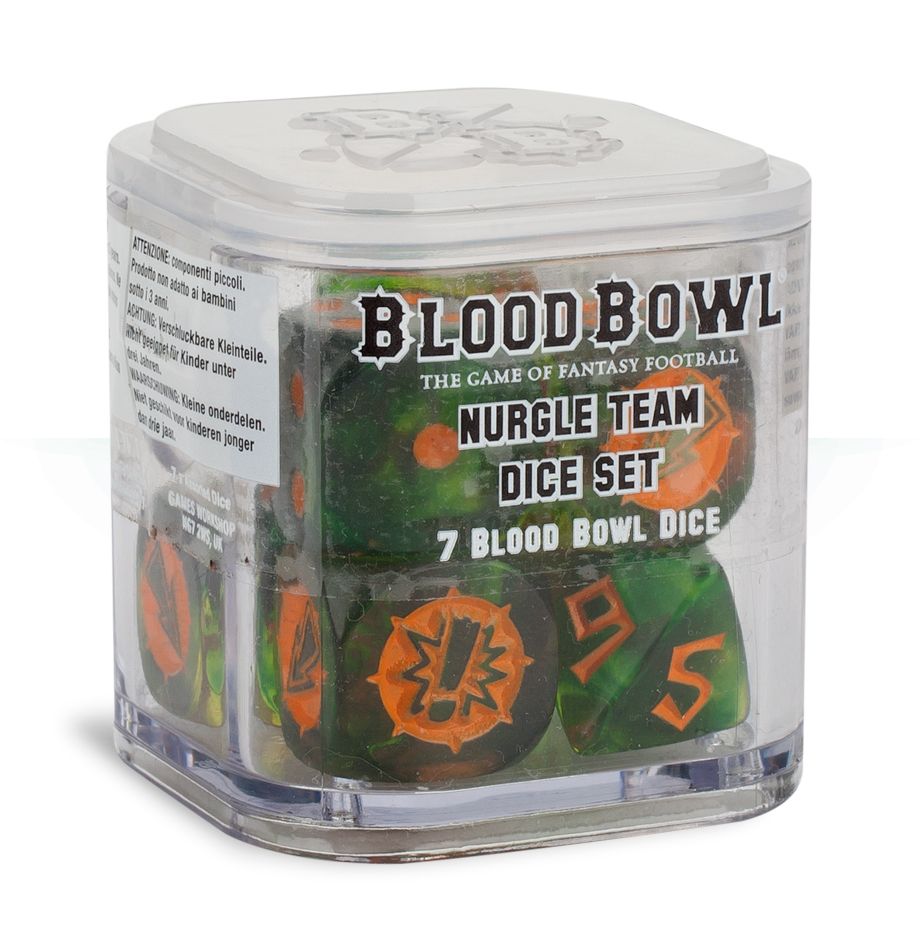 The perfect companion to your Nurgle Blood Bowl team, this set of handsome(ish) dice in clear green with orange markings, featuring a Nurgle icon in place of the 6, includes: 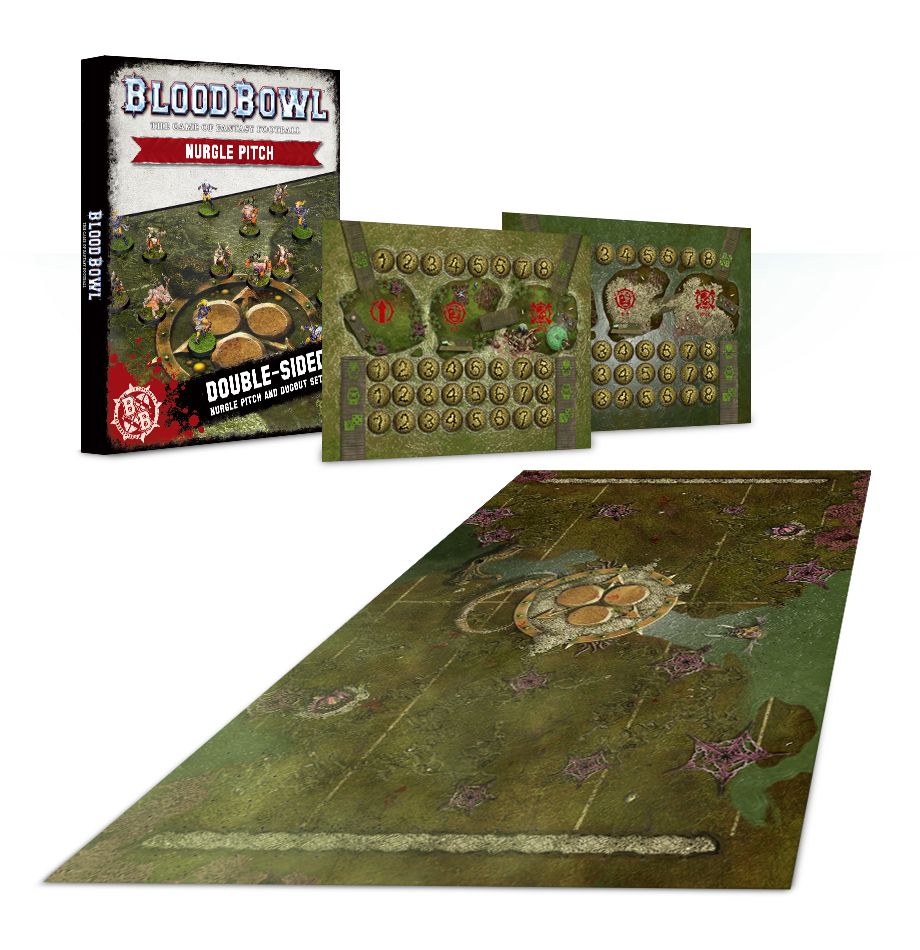 A double-sided card Blood Bowl pitch, complete with matching dug-outs, this is the perfect place for your Nurgle teams to play. One side represents a beautiful*, flowering** Garden of Nurgle, with plants and trees gaily littering the pitch and maggots cheerily infesting the end zones; the other side is, uh, ‘self-fertilised’ – due to this there are far more hazards in place, with betoothed plants, pools of slime and a great big horrible tentacle waving about. The dug-outs are themed to match, and feature score trackers, reserves, Knocked Out and Serious Injury boxes, Down trackers for both halves, and a re-roll tracker.

The pitch is made to the same specifications as the board included with the Blood Bowl boxed game, and includes rules for play with the sticky plant life trying to hinder your match. 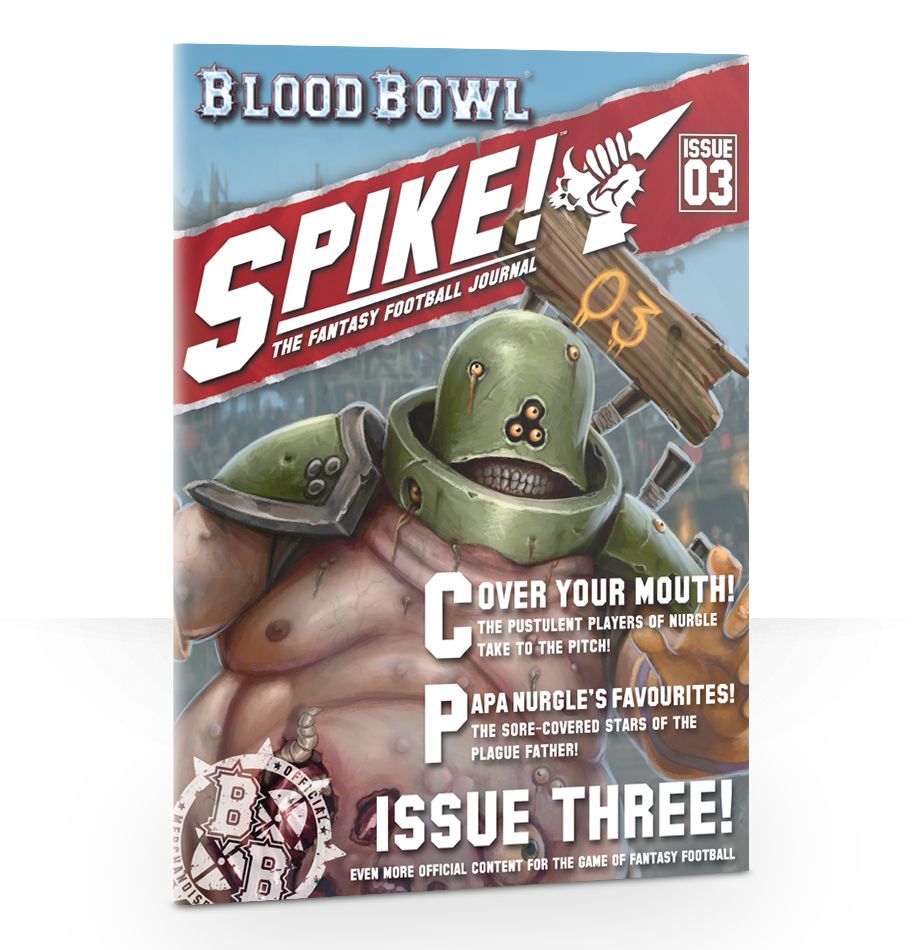 Guest edited by Glug Glottington, this is the third issue of Spike! Journal. Covering Nurgle teams, with a veritable host of brand-new content for Blood Bowl, this is sure to be a must-have for Chaos coaches… 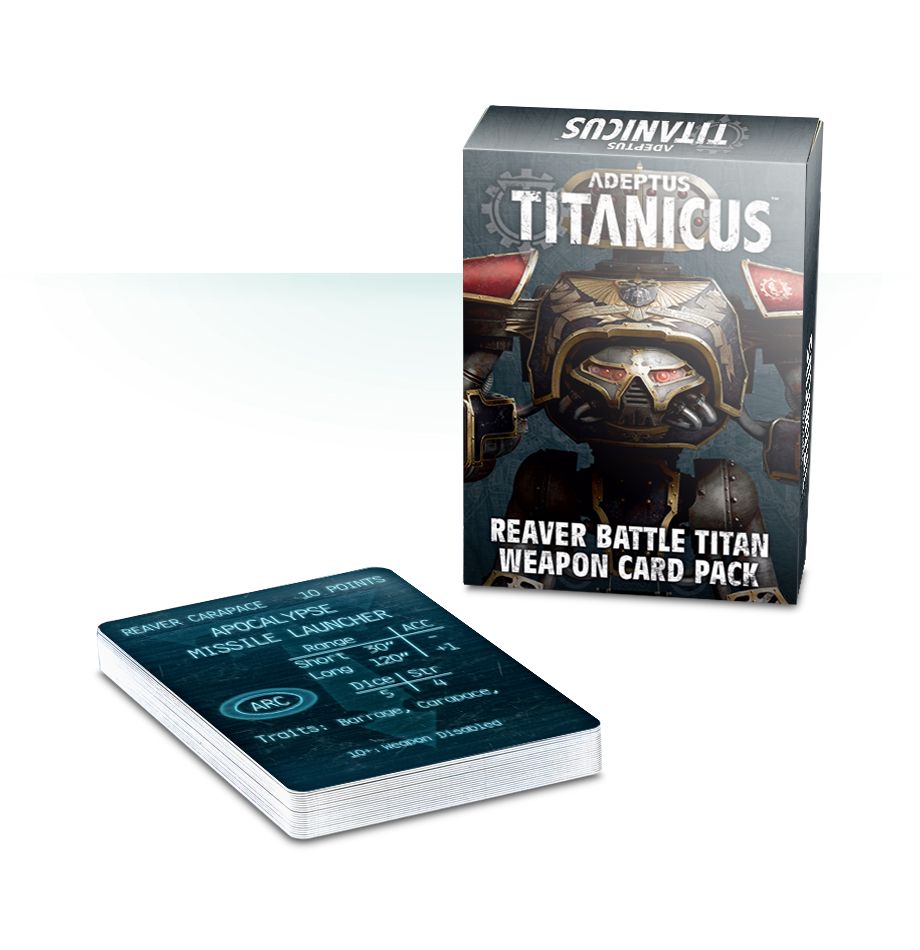 Supplementing the weapon choices found in the Adeptus Titanicus Rules Set, and used in conjunction with the Command Terminals, these Weapon Cards are used to keep track of the armaments you’ve deployed on your Titan. Each of the 26 cards in this pack represents a weapon from your Reaver Titans, and fits snugly onto the weapon slots on their Command Terminals. When flipped, they are used to denote that the weapon is disabled. Included: 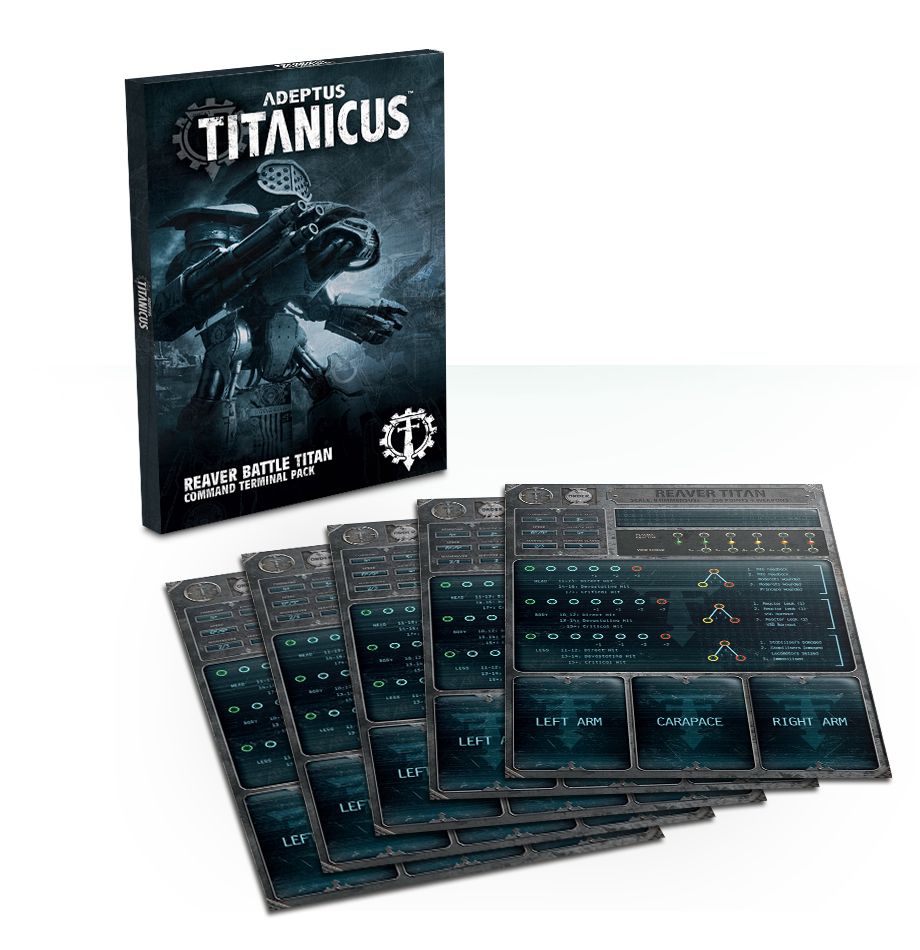 Expanding and adding to your games of Adeptus Titanicus is easy – simply pick up new Titans, and slot them into your maniples! But you’ll need Command Terminals for each, and that’s where this pack comes in. A set of 5 large-format card Terminals, this provides a detailed surface on which to track the status of your Titans, their basic statistics and their power routing, along with spaces to place Weapon Cards for ease of use. Included: 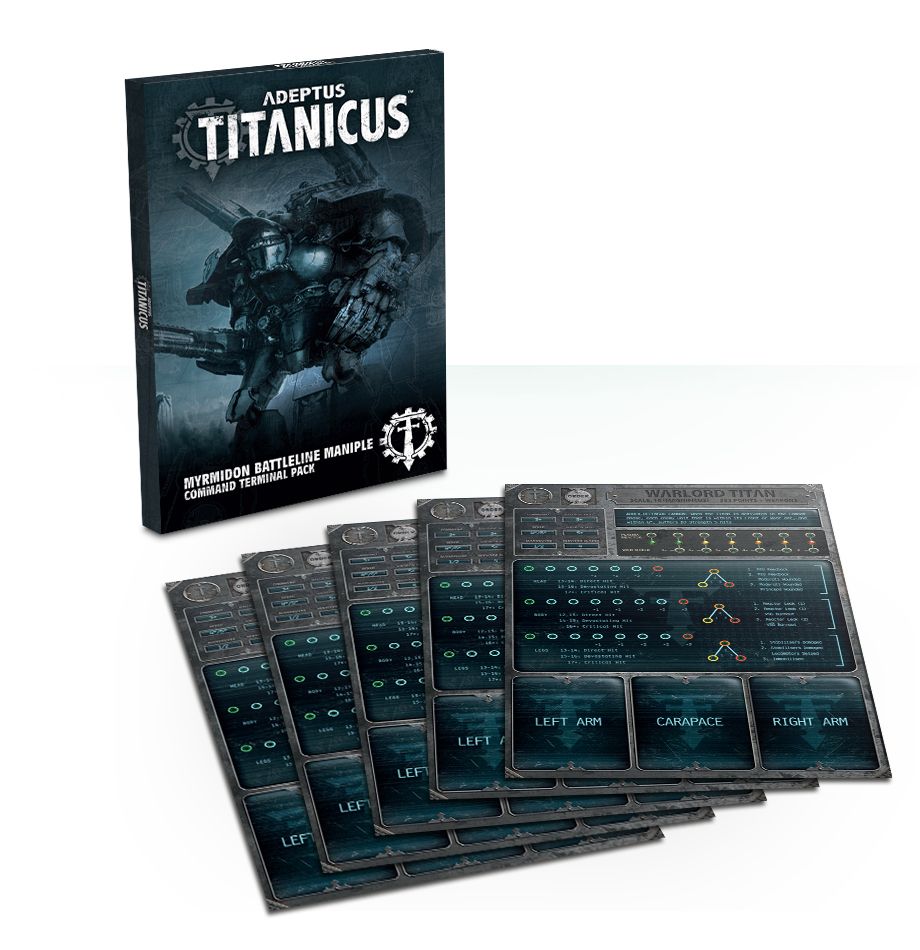 Expanding and adding to your games of Adeptus Titanicus is easy – simply pick up new Titans, and slot them into your maniple – collections of models which, when fielded together, gain special rules and abilities. But you’ll need Command Terminals for each, and that’s where this pack – designed to represent a Myrmidon Battleline Maniple – comes in. A set of 5 large-format card Terminals, this provides a detailed surface on which to track the status of your Titans, their basic statistics and their power routing, along with spaces to place Weapon Cards for ease of use. Included:

Author: Adam Harrison
Writer, Editor, Texas Native, and Austinite for 15+ years, Adam covers all things Tabletop Gaming. Which includes Warhammer 40,000, Age of Sigmar, D&D, Board Games and everything else that involves dice, boards, cards and a table. A hobbyist, player, and collector of miniatures and games, Adam's current obsession are his Death Armies for Age of Sigmar, his Blood Angels and Tyranids for 40k, and his ever growing Arkham Horror: The Card Game Collection.
Advertisement
Adeptus Titanicus BloodBowl Games Workshop Miniatures Tabletop News
Advertisement