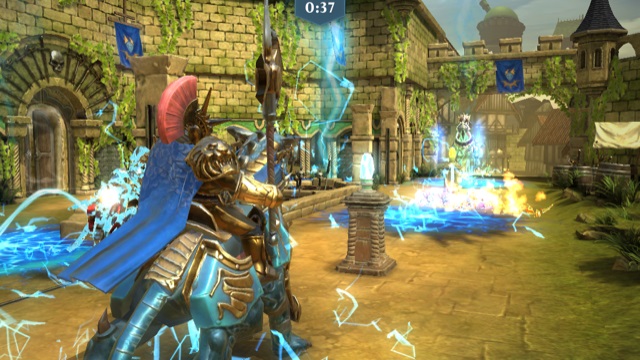 AoS Realm War is a new mobile game that I’ve been poking at over the course of a few days now. I’m not a fan of mobile games but I do enjoy playing in the digital world quite a bit. This game is an experience I’m not really used to.

When the game launched earlier this week, I noted that it was a free-to-play game. Now, I’m not a person who likes to spend time playing games on their phone or mobile device (tablet, etc.) – I much prefer a keyboard and mouse or a controller in my hands. But, I figured I’d go ahead and download this one cause, hey, it’s free. Plus I could always delete it later. 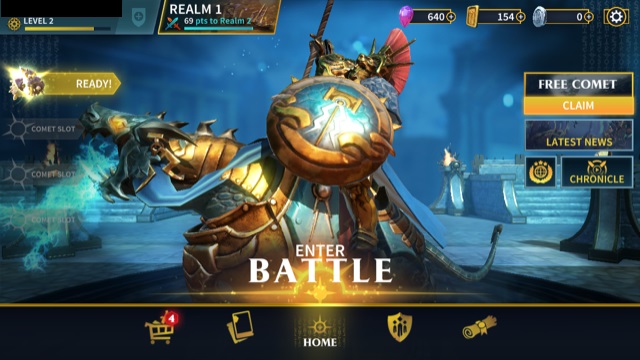 So I fired the game up and gave it a whirl. You start off with a pretty basic set of cards and a Warlord. Your Warlord is your Amry’s general and has a special ability that you can use in the game to (typically) do a boat load of damage to enemy units on the field.

There is an animation that happens and it’s kinda neat. In fact, this game has a lot of great art and animation. The colors look great and I was fairly impressed with the overall look of the game. Anyways, the game is setup with two lanes on the battlefield. Your goal is to destroy the enemy’s pylon and warlord. You can send units in either lane and when they get to the end of the lane they will attack the pylon or warlord. 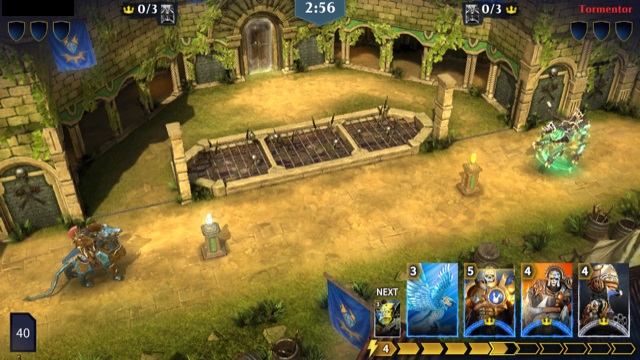 There is one other thing to note about the top lane. If you send 3 heroes (denoted by the crown icon on their cards) and they make it passed the door way up top, they can summon a Bloodthirster. This is a pretty powerful unit and it can tear through quite a bit of the enemy’s health.

Now, I’m sure some purists out there are tearing their hair out right now. “How can a Sigmarite summon a Bloodthirster! Blasphemy!” I don’t know – I didn’t make the game. You can also summon other units to the battlefield based on what ever you have in your deck. It’s kind of a crap-shoot, but in a kind of fun way…I’m just rolling with it, man. 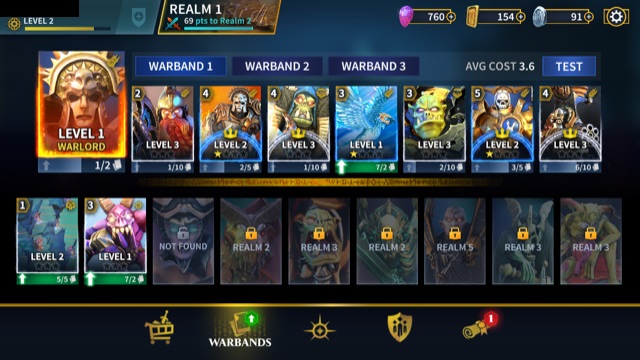 In my deck, which is still in the first realm, I’ve got a Weirdnob Shaman right along side a Lord-Relictor. I can even summon some Pink Horrors if I swap them out. Each unit has unique abilities, strengths and weaknesses. As part CCG, it’s kind of interesting how they each are just a different weapon in your arsenal.

Also, if you notice some of them have green bars under their name – that means I can level them up. That actually increases their stats and makes them deadlier on the battlefield. 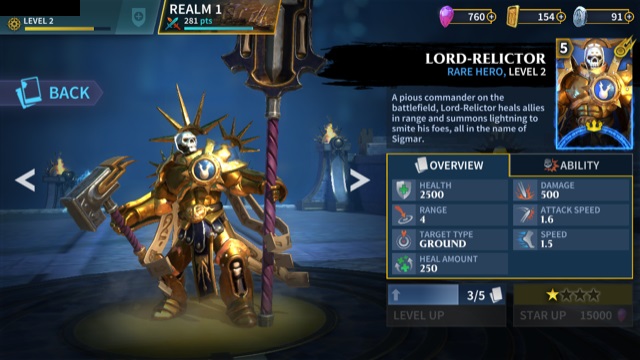 In order to level them up, you unlock comets and get cards. Normally, you’d hate getting a duplicate cards – but in Realm War, you need those cards to level up your units. In this case, to take my Lord-Relictor from level 2 to level 3, I need to get 5 total copies of this card – I’ve already got 3 out of 5. 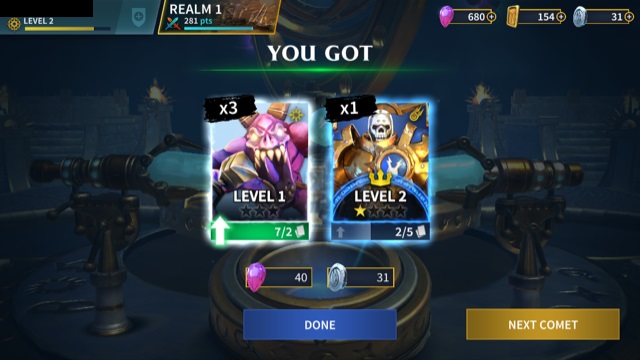 I also have to spend some coinage to upgrade. And oh yes, there are micro-transactions…So lets tackle this topic: 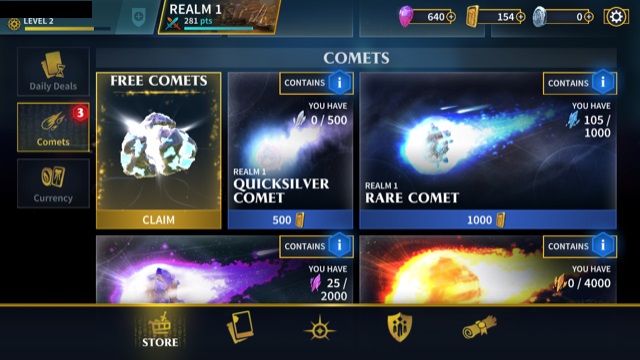 I’m not going to defend the micro-transactions – or promote them either. They are a part of the game and you can opt to buy more of any resource at the cost of in-game currency or with real cash. Now, I’m not the type of player that will drop $50 on a mobile game – but you can totally do that. There was a hero pack I could have bought for $25 and gotten a TON of stuff. It’s a little pay-to-win, but hey, the developers worked on this game and it’s free. That’s the business model they are going for – it is what it is.

Now, you don’t ever have to drop a dime on this game. But there are time gates that prevent you from just skipping ahead without spending money. Plus your cards will always benefit from spending money on upgrades. So the temptation is there. The game does a decent job of dangling the carrot in front of players with daily quests and rewards – so it IS possible to play casually and level-up over time.

Warhammer AoS: Realm War is a pretty looking game. It’s got a simple interface, plays fairly smooth and it does have some tactical merit. I’ve enjoyed poking around with it and if mobile games are your thing, I’d recommend this one. If you’re okay with the grind or just want something to mess with for free, this game has you covered.

Things To Be Aware Of

If you’re looking for this game, it can be found on the Apple App Store or in the Google Play Store:

Fight and battle in an ultimate challenge to rule the Mortal Realms!

Amass an army of powerful cards including Generals, Heroes and Summons. Collect cards, level them up and use their power to crush your opponents.

Choose from many unique cards to create your own deck strategies. Deploy your powerful units to the battlefield. Enhance your tactics by deciding when to unleash game changing General and Hero Special Powers, designed to combine with infinite potential.

Send your heroes to take control of the of the mighty Realmgate and boost your deck with unique and super powered cards. These legendary cards can be played without cost, so choose your moment wisely.

Rise to become the ultimate Warlord!

Warhammer Age of Sigmar: Realm War is a true fusion of MOBA and PvP card battler.

I’d give it a [It’s FREE] out of [download it and decide for yourself] rating!

Kill some time by killing your enemies…and your battery life.

Author: Adam Harrison
Writer, Editor, Texas Native, and Austinite for 15+ years, Adam covers all things Tabletop Gaming. Which includes Warhammer 40,000, Age of Sigmar, D&D, Board Games and everything else that involves dice, boards, cards and a table. A hobbyist, player, and collector of miniatures and games, Adam's current obsession are his Death Armies for Age of Sigmar, his Blood Angels and Tyranids for 40k, and his ever growing Arkham Horror: The Card Game Collection.
Advertisement
Age of Sigmar Games Workshop Review Video Games
Advertisement

Call Of Cthulhu: Walk Through An Hour Of Investigation In This New Gameplay Video