The Orks are getting a whole bunch of new ‘Gubbinz’ to use in battle and the rumor mill is spilling the beans on them! Come take a look at what special relics the Orks are going to wield in battle!

Codex: Ork is around the corner and that means that the rumors are starting to flow. The mill did not disappoint today and now we’ve got a pretty good look at what to expect with the next batch of orky goodies heading our way.

Now keep in mind, these are still technically rumors. They may not be the final versions that appear in the codex – but we’re only a few days away from pre-order. Standard Salt Caveat still applies.

Now – this shouldn’t be a shock to anyone that orks are also getting relics. In fact, you’ve probably seen similar versions of just about all these options before. However, these are ORKY so they are clearly better. 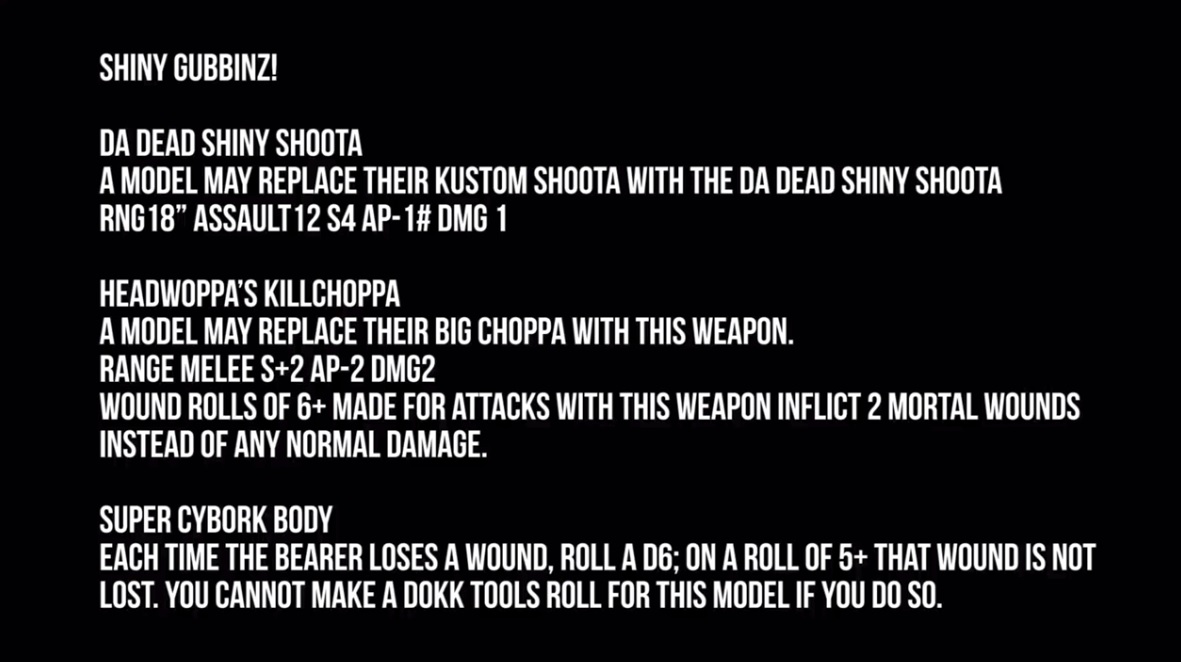 This first batch has a better shoota, choppa, and cybork body.  If that shoota is correct, 12 shots is no joke. Then again, this is ork shooting. Maybe stick to the Killchopa for some serious punch. 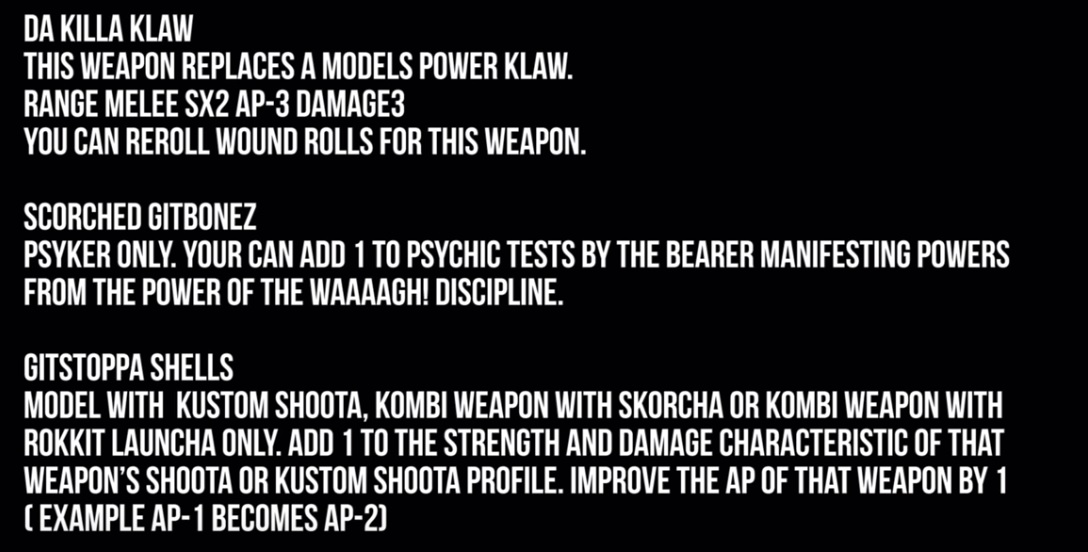 This batch gives us a better power klaw, a boost to psychic tests and a better Kustom Shoota. All of these look fairly useful. The re-roll on the power klaw is nice and so is the boost to the strength and AP of the Kustom/Kombi shoota. And if you can’t think of why a +1 to your Psychic tests are good, you need to Smite more. 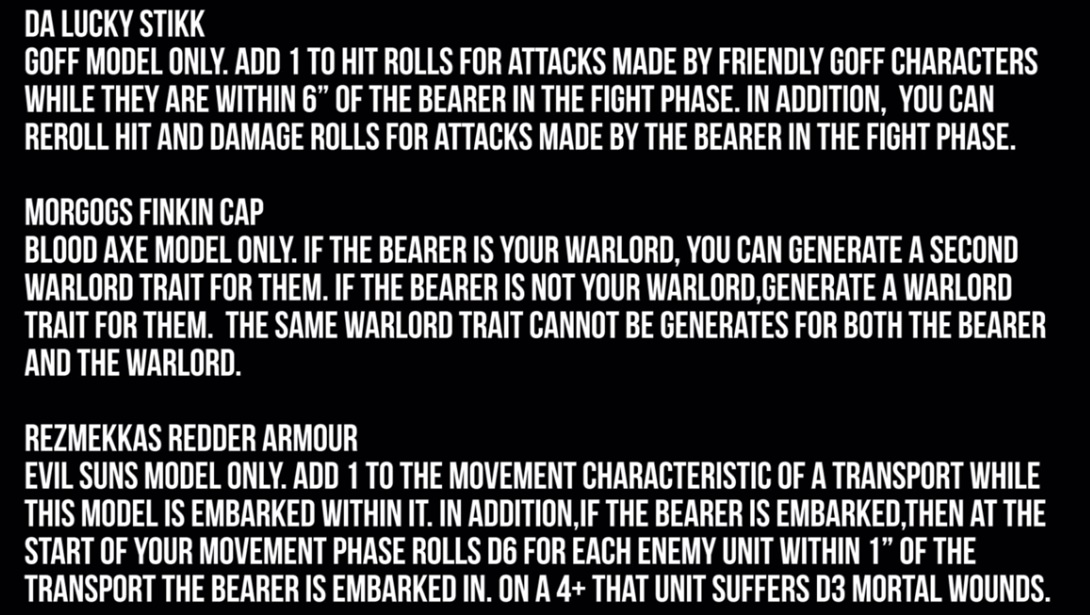 Here we get into some of the unique gear for Clan Specific relics. Goffs get to hit better, Blood Axes get more Warlord traits, and the Evil Suns get better vehicles. Not bad! 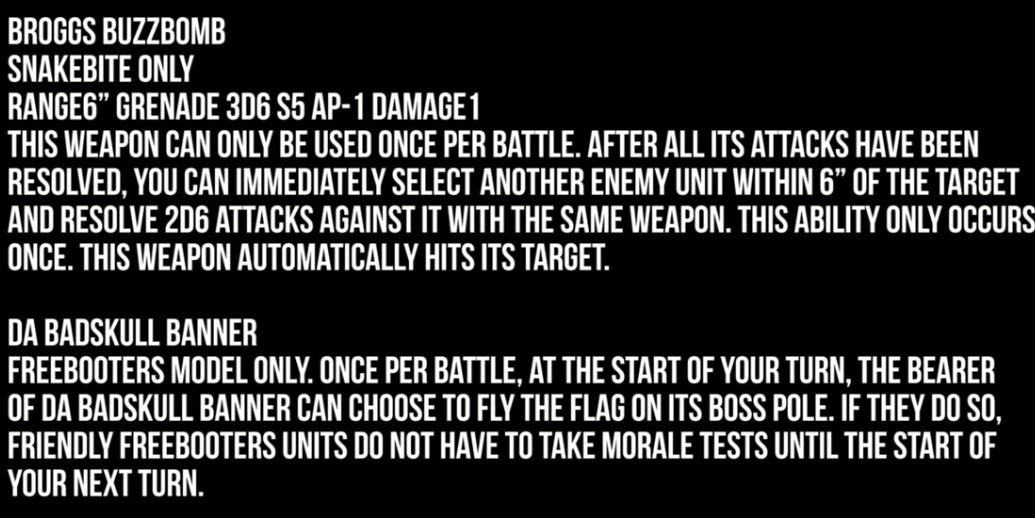 Snakebites are getting a fancy grenade which basically lets you get 5d6 S5 AP 1 attacks. Now, I’d like to check the actual wording on this attack because of that “This weapon automatically hits its target” part.

The Freebooters (who are technically clan-less) even get a fancy relic! It grants immunity to morale tests for a turn.

Like all armies, they also have the option to spend more CP to take more relics. Looking at the screen-caps from above, yes – I can see this being useful!

Well that’s all for now! How are those orky gubbinz looking to you? Let us know in the comments below!