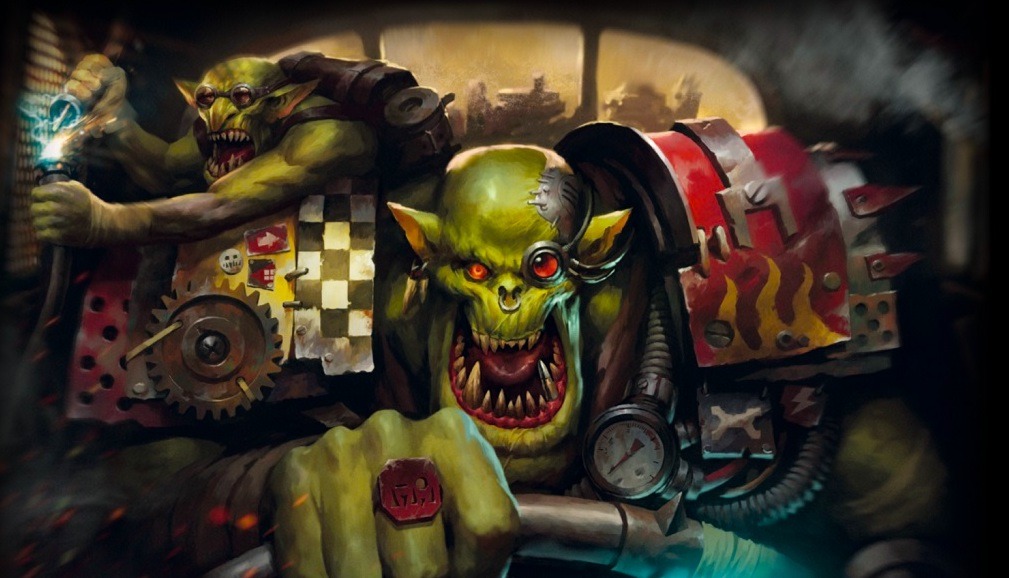 Goatboy here again and let me tell you – this Orktober has been real slow one the Ork side of things – but I hear engines revving on the horizon.

Beyond some funny videos and tiny bits of info – we really have no idea how this new rein-visioning of the old great green enemy is really going to be.  From all bits and pieces it is sounding like it is all about being red, going fast, and having a ton of random buggies doing buggie stuff. 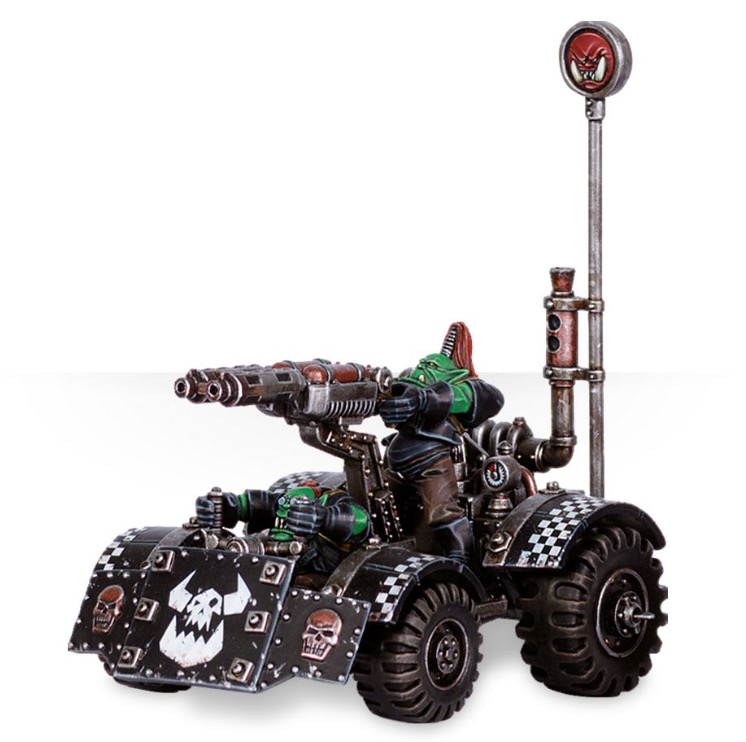 Out with the old…

Now don’t get me wrong – I love every buggy model I have seen so far.  They look Orky and have so much random bits of flavor tacked on its a pretty amazing set of models.  I just worry that while we get a bunch of cool buggies models – their rules might all kinda meh like the last batch of buggies we had for Orks.  The model was never meant to be amazing set of rules – more of a pain in the butt little guy who sometimes hit with their rokkit or Twin Link Big Shoota.  Of course if the new rules are both good and cheap then hey – I am all for the upcoming buggieaggeddon.  It’s just hard for me to truly think of what would make a crappy vehicle be good – beyond not making it crappy and have a ton of guns for a very small price.

With that in mind – I think the new Orks might work in a new way unlike the older editions and index.  I think while you can still have a Horde of green crazies coming at you – they might switch it up and bring it back to being a true Kult of Speed style army.  I remember when the 4th edition Ork book came out and the first thing I built out of it was Nob Bikerz.  My good buddy told me I was dumb but I knew there was something insane with that unit – let alone two of them.  As soon as I got paint to model I started wrecking people locally.  Heck I remember so many games where I only used one unit to win the game while the other was holding a back field objective.  Oh the glorious days of troops only scoring objectives and you had 800+ point units staying back to let you win the game.

The Speed Freek nature of that army was what I always loved about Orks.  I still have 120+ painted Shoota boyz, 90 + Choppa boyz, and a plethora of Nobz laying around.  I played the Horde Orks for awhile and while I did enjoy the army (Back in the old 6th ally days – Chaos + Orks was a pretty potent combo) it still didn’t feel like what I enjoyed the most about Orks.  Going fast, not caring if you blew up, and slamming into enemy lines full of the Waagh.  With the bits and pieces we have seen I think it is about to come back to the old school Speed Freek of Nature army. 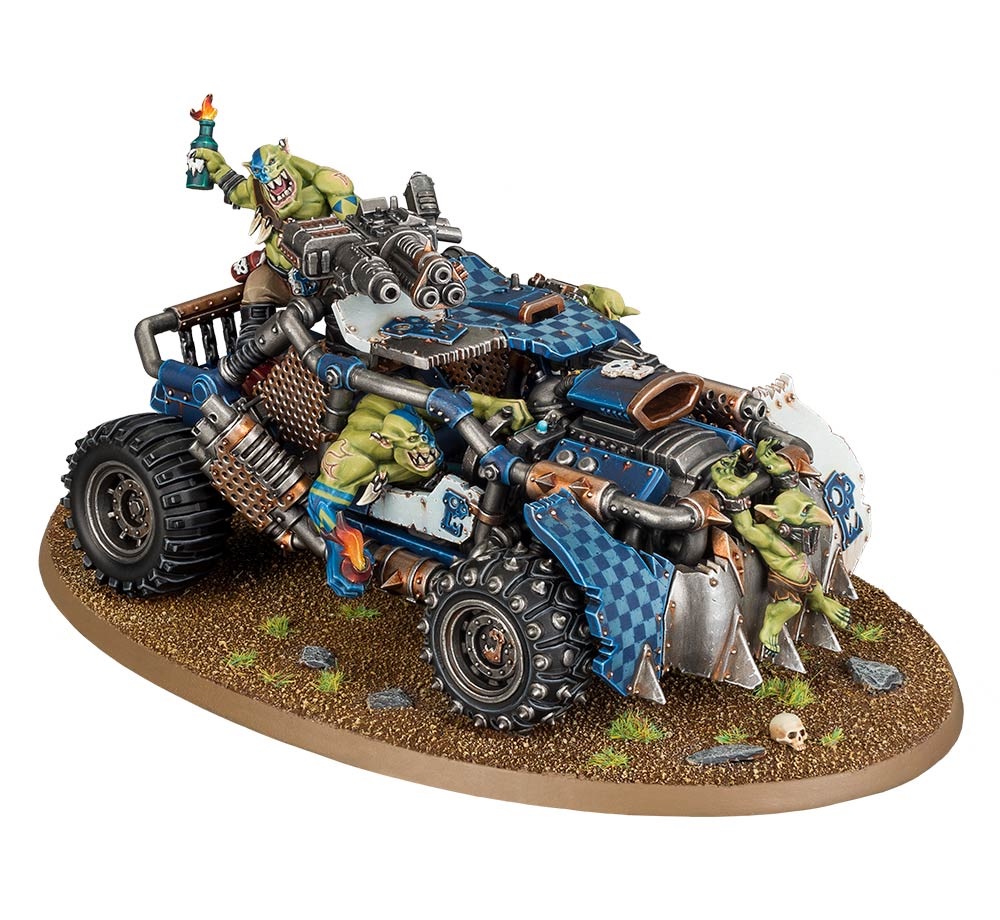 While the Changes to Deep striking and the fly Keyword also hurt Orks – I expect the FAQ to be written with that new army in mind.  In fact I bet instead of boyz – the horde will be full of light based vehicles on rather large bases, power sliding into the enemy lines.  Locking things down for a turn and maybe getting lucky with a good explosion or two.  Or maybe having better odds on a blow up or some kind of Death Guard like option to auto explode.  You do know all those bases we have seen for the buggies seems to show them on Dread knight Sized options.  This covers a lot of territory and like I said earlier you can easily get mixed in, turn 90 degrees and grab a ton of the enemy.  Heck I wonder how insane the Max Mad inspired Ork Warboss on a buggy might be.  Could he be some kind of super Chariot and under 10 wounds?  What kind of nonsense will he get up to with some well used Stratagems or two?

I know I messed with some lists based on massed Bikers.  I wish they could have been troops – but the sheer amount of Dakka they could throw out seems amazing.  Mix that in with the rumored army wide more Dakka rule that grants more shots when rolling a 6 and you start to see an army that might sorta hit better then a 5+ if you run the math.  We all know how nutty Ork shooting can be when they hit a lot.  I wonder if will see more Grots helping out with the aiming and other stacks of rules to grant a 4+ to hit.  Heck I bet having a ton of Bikers will be key to doing well with the new book as it will all be about speed and engaging turn 1-2 with as many red based vehicles as you can. 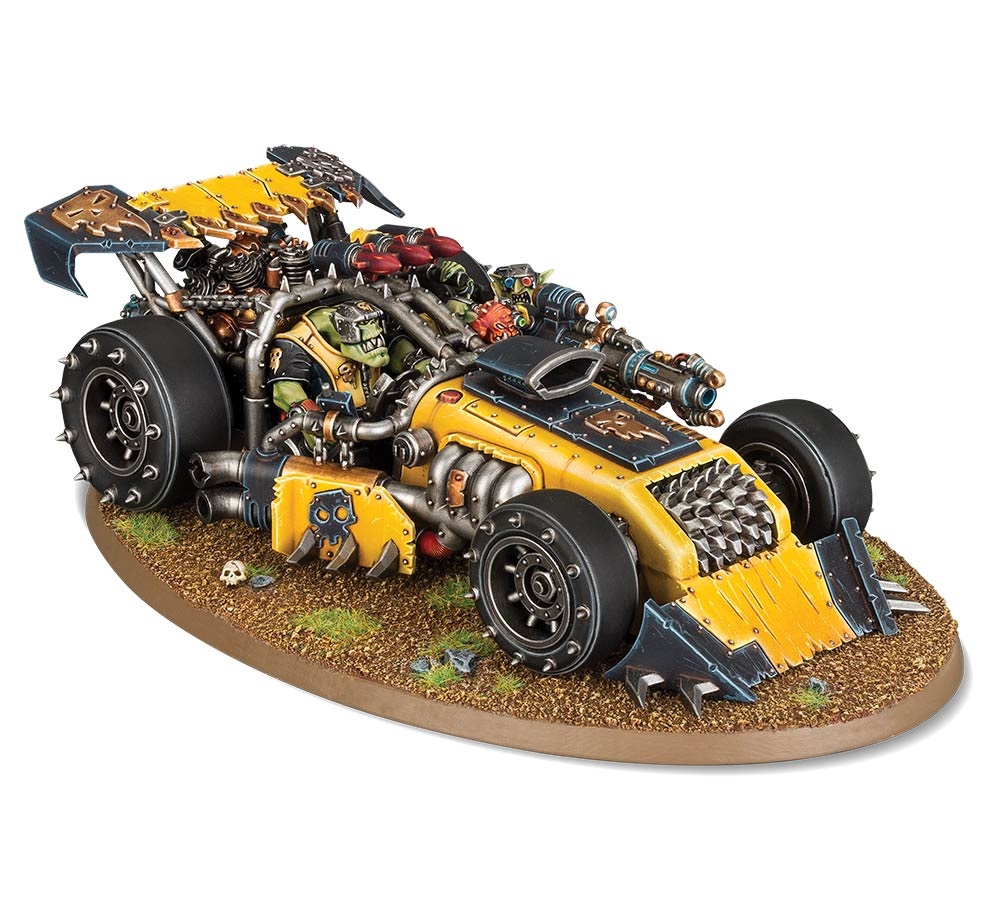 I am sure will have a Greentide like army in the book as well – but it just feels like they want you going fast, yelling Waagh, and crumpin as many dirty ‘umis as you can.  I think we do get a fast vehicle army we might find something interesting for the Meta.  The only other “fast” assault based list that uses vehicles is the unused Wych based armies.  I still think they could work – especially in the new FAQ.  I also don’t expect them to have any changes with the upcoming Chapter approved so going fast to control the middle to opponents board edge will be very important.  Let’s get a list of my Ork Hopes.

I am sure there are others but these are the things I really just want to have in this new book.  A lot of chatter points to them being good and I just hope this is true.  It would be nice to have another strong Xenos army out there that isn’t Space Elves.  A lot of these Xenos suffer from lack of “allies” and the Ork book might be a good change to that due to having “clans”.  This would help give it a feeling of an Ally based book even though everything will be some kind of Ork based option.  Orks were my second army and I will always have a soft space in my cold black heart for these fungus based monsters. 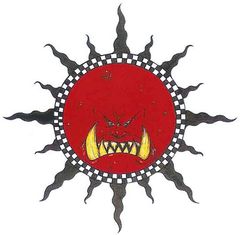 Author: Thomas / Goatboy
Thomas Reidy, aka Goatboy, the ever-evil member of BoLS. I do arts, play 40k, and even paint a lot of stuff. I have been playing Warhammer 40K since the 1990s, and have won multiple national events including Adepticon and GW GTs. I've been writing for BoLS for 15 years. Look at my Instagram to see what I am working on - or working on for someone. I am always doing something hobby related.
Advertisement
Editorials Orks Warhammer 40k
Advertisement 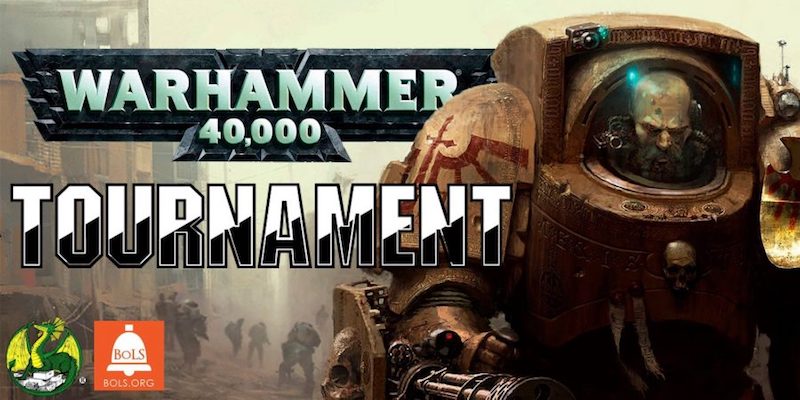