Let’s check back in with the folks at Corvus Belli, where Infinity is rolling out more and more of its 3rd Offensive expansion. Today we’ve got a look at the new Yu-Jing sectorial as well as the Combined Army and a few other friends.

The 3rd Offensive for Infinity continues to roll out with more news and previews. If you haven’t been following along, the 3rd Front expansion is a major shaking up of the storyline in the ongoing Infinity game. Humanity is facing a massive external threat, pushing out hard in the beleaguered Paradiso system. But as the Combined Army rolls out more of its troops, many of the human factions are responding with new models and sectorial armies working to push back this dire threat. Let’s take a look.

First up, we have a look at the new Invincible Army Sectorial, which is Yu-Jing’s elite heavy infantry army. Featuring new shock troops that can jump in and create a blast wave, stealthy and mobile close-range saboteurs, and some amazing looking powered armor, the Invincible Army is sure to live up to its name.

We’ve got a couple of stat previews here for you, showing off the new Zhencha armored recon unit, and the Liu Xing jump infantry. First up let’s take a look at the jump infantry–these troopers will drop in, and take out targets behind enemy lines with surprising efficiency.

And their counterparts, the Zhencha, can help you spot the targets you want to take out, as well as helping to secure the high ground. A lot of board control you can manage with these.

And that’s just a small taste of what’s coming next for Yu-Jing’s Invincible Army.

But Yu-Jing isn’t the only faction getting some sweet new updates in the 3rd Front. We’ve also got a look at the Combined Army, the alien force that is delivering the most devastating blow to humanity’s place in the stars, laying claim to many cities and wreaking devastation on the Paradiso system.

They’re getting an updated Sectorial Army as well, the Morat Aggression Force.

One of the biggest things you can do with your Combined Army is create combined fireteams. In the Morat Aggression force, two units now have much more tactical flexibility. Raktoraks can join any Fireteam, allowing you to have more  Order efficiency, as well as fielding Suryats with your regular infantry, or in a special elite squad with their leader Kornak. 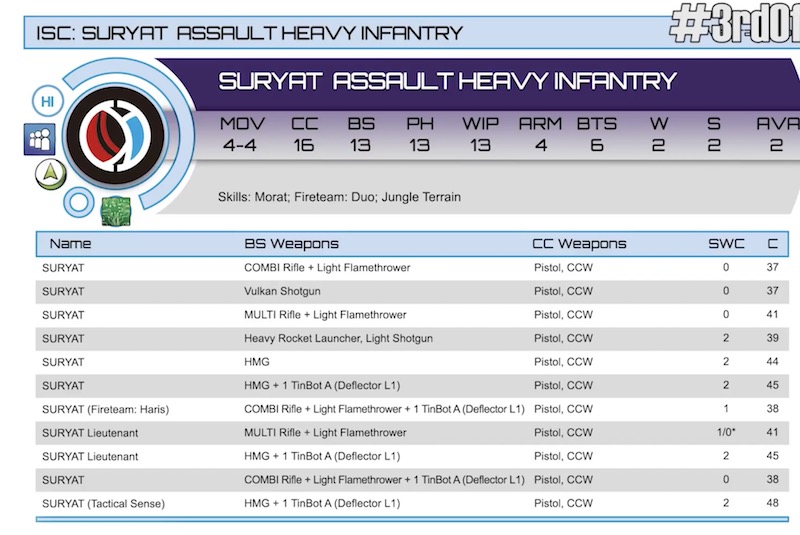 Fighting them are the various military orders of Pan Oceania.

A few new units on display here–we have a look at the upcoming starter set and the minis you’ll be able to spot inside.

You can see some of the new miniatures on display here. Of particular interest is the Zulu Cobra there, 2nd from the right.

This specialized recon troop can help disrupt your enemy’s plans with its different abilities and weaponry. BS Weapons indeed. Accompanying them are the Echo Bravo ready reaction units.

And last, but certainly not least, the new Joan of Arc miniature, ready to lead the forces of Pan-O to victory. 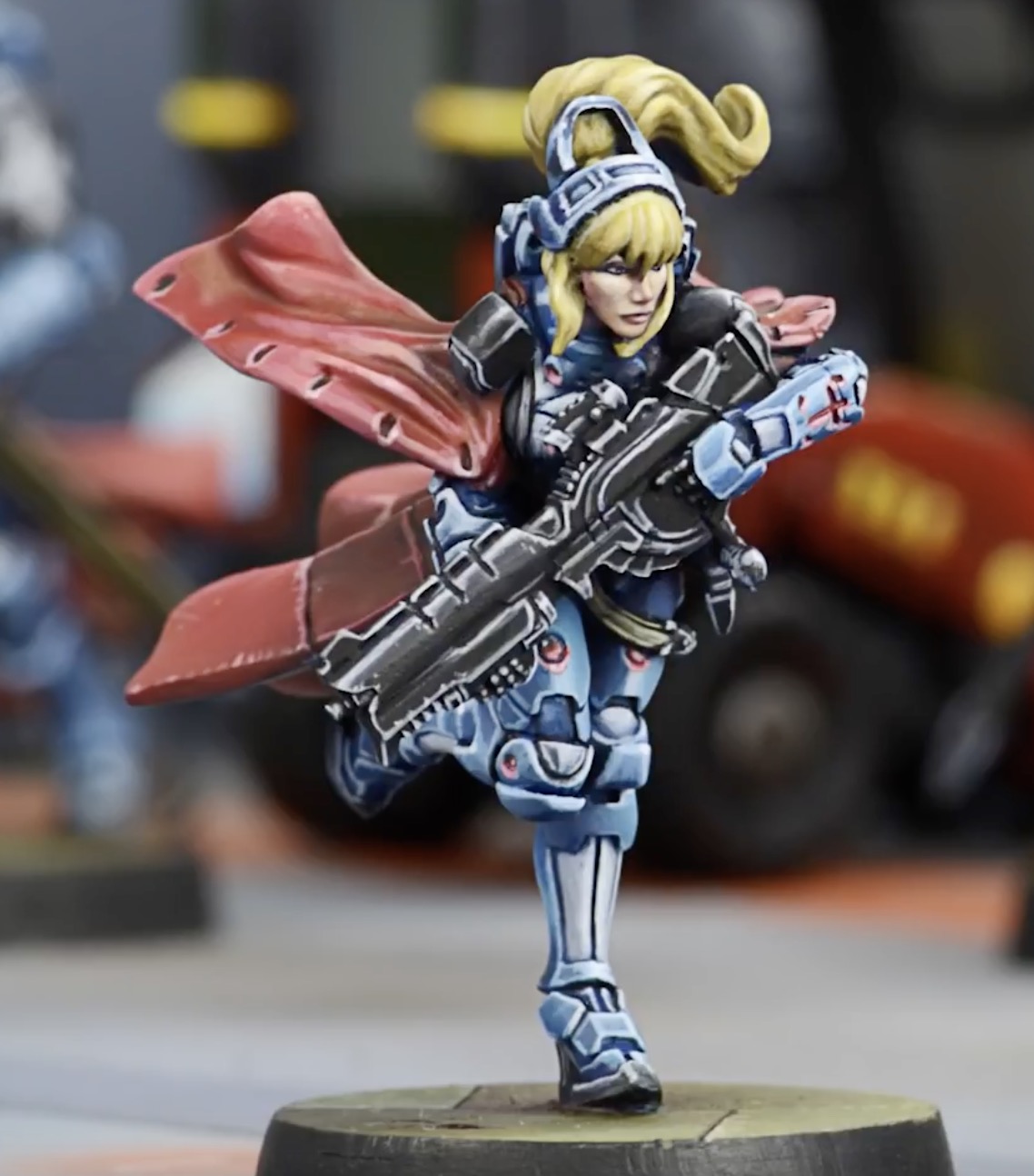 One faction remains to be seen–the Mercenaries of 3rd Offensive who are swimming into a much more official role in the new book.

They have a much larger role to play in the upcoming conflict–if you want the best person for the job, you need to pay–and these mercenaries are worth every penny. New to this book is Raoul Spector, a mercenary operative armed with Drop Bears. 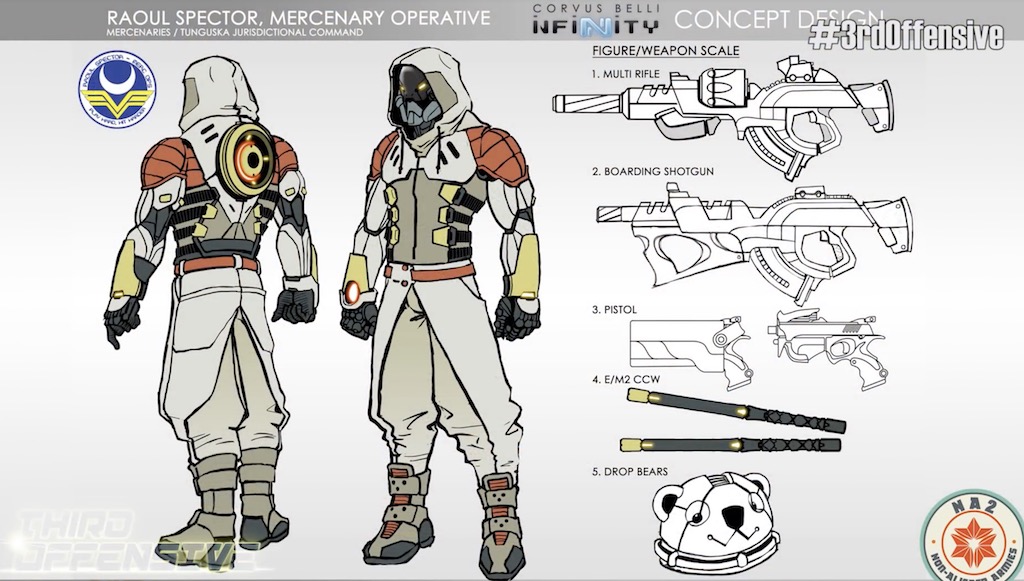 Infinity’s Third Offensive continues, and is available for pre-order until November 5th. Grab yours today and secure a pre-order reward… in the meantime, keep your eyes peeled, we’ll have more updates from the 3rd Offensive soon.

What new miniatures/sectorials are you looking forward to?

Author: J.R. Zambrano
Bell of Lost Souls Staff Writer and DM, J.R. covers RPGs of all stripes and on occasion eats sandwiches. You can ask him about either at [email protected]
Advertisement
Infinity The Game Tabletop News Videos
Advertisement