Monsterpocalypse Wave 2 is here, and with it, the cyberninjas of the Shadow Sun Syndicate who can grow to kaiju proportions join the side of the Defenders, meanwhile the Destroyers are reinforced by the Lords of Cthul.

It’s the season of Monsterpocalypse. The release roll out continues, bringing more monsters and more pocalypse to the tabletop. This time it’s the Ultraman-esque Shadow Sun Syndicate, who I’ve been looking forward to getting a chance to play. At Gen Con 2018 we had a chance to talk with some of the designers, and these guys sounded real exciting. What’s not to like about a cyberninja that can also grow big enough to crush a building with their bare hands? Plus, as a limited release, you can pick up the Gen Con exclusive Brewgrosh, which is one of the Lords of Cthul, kicking back and relaxing with a brew like anyone else–but time is rapidly running out. Check them out! 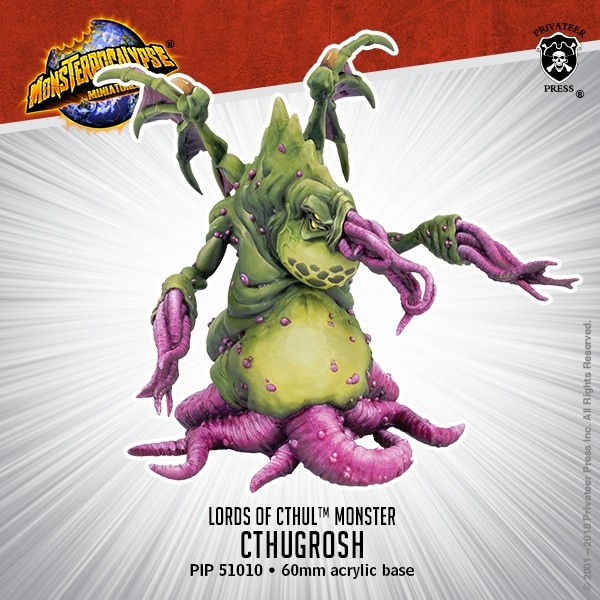 A truly alien and inexplicable godlike creature from a dimension beyond human ken, Cthugrosh was summoned to Earth by the depraved sacrifices of his occult worshipers, all of whom were slain upon his arrival. Heralded as a bringer of apocalypse, Cthugrosh is one of the greatest Lords of Cthul, an entity that draws power from carnage and whose gluttony for life’s energy seems inexhaustible. Alien as his mind is, it is also immensely powerful, capable of tremendous feats of telekinesis and unleashing mind-rending surges of pure energy. 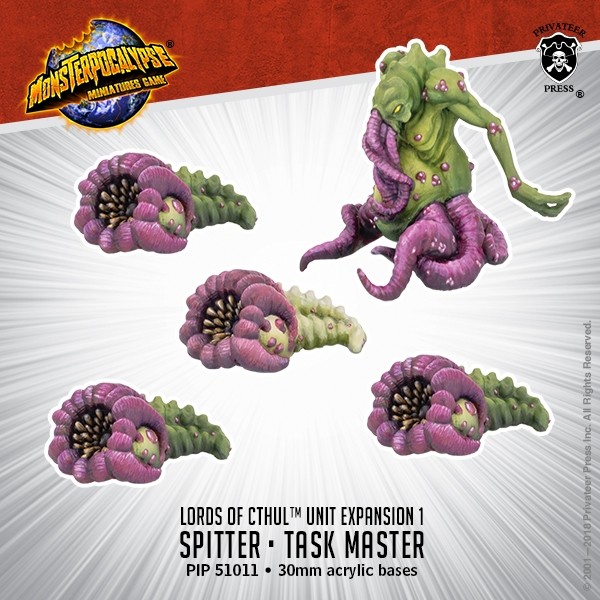 The slug-like monstrosities called spitters follow in the wake of the proper Lords of Cthul, emitting vile and toxic fluids to digest adversaries from a distance. They can also expel this fluid to extinguish flames, though they rarely have reason to limit the destruction around them.

Mighty as the Lords of Cthul may be, they sometimes deign to delegate the oversight of their conquered dominions to task masters, telekinetically powerful creatures who resemble Cthugrosh in miniature. This resemblance is no coincidence, as the killing might and cruelty of the task masters is terrifying to behold. 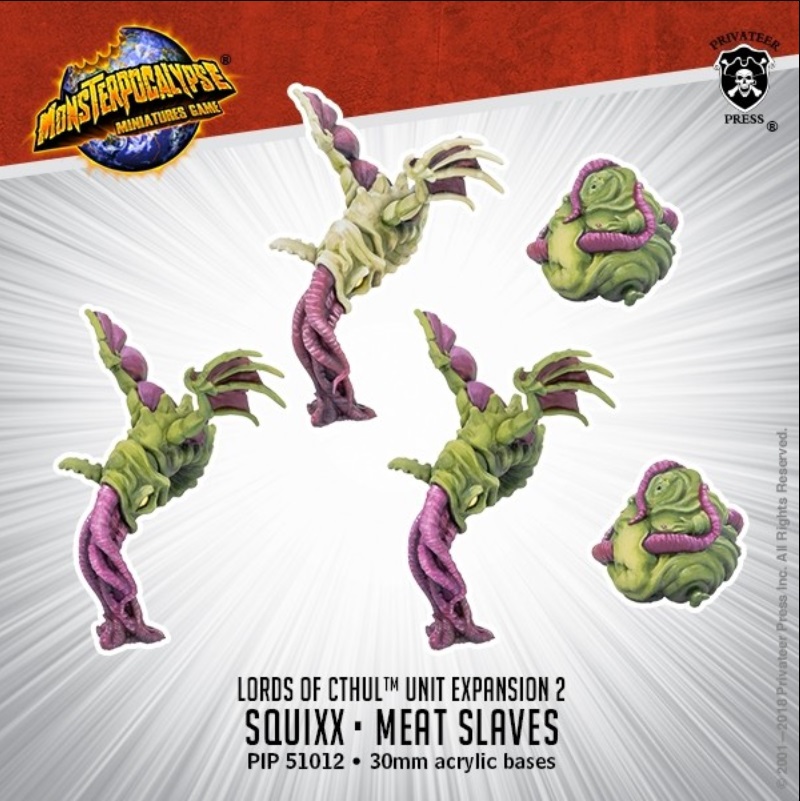 While most of the horrors brought by the Lords of Cthul slither across the ground on a multitude of turgid tentacles, the squix flaps through the skies above on bat-like wings, seeking living prey to drain of vitality.

In a horrific parody of living things, meat slaves are egglike incubators formed from the flesh of former cultists and victims within which any of the still-forming minions of Cthul bubble and seethe. At the slightest disturbance, their membranes tear open to unleash the monster within. 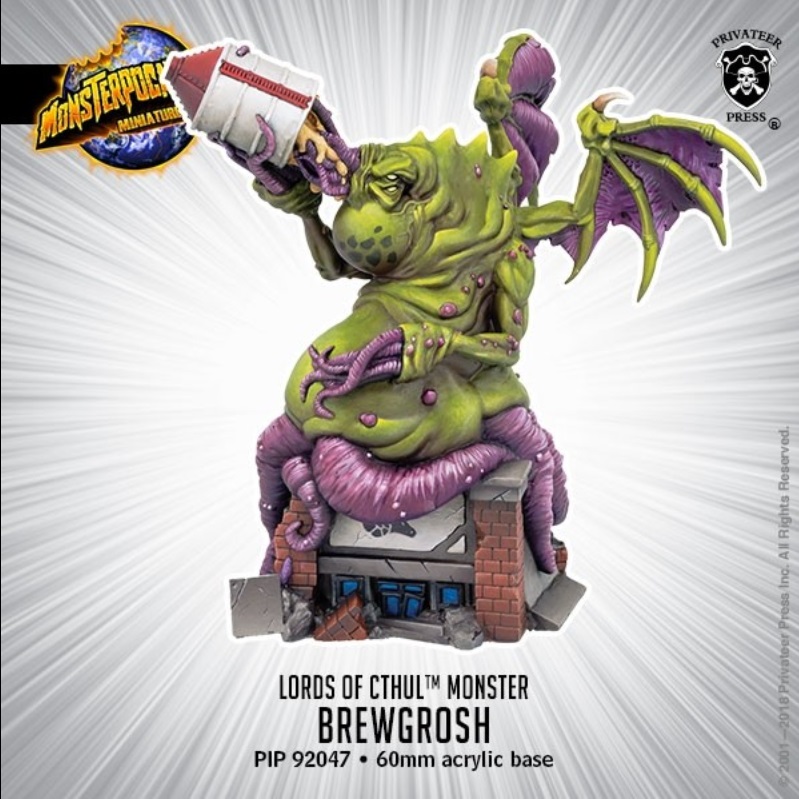 Destroying cities, terrorizing their innocent population, and eradicating their defenders can be thirsty work. That’s why it’s nice to swing by the local watering hole and put back a few (thousand) pints at the end of a long day.

When he’s not trying to reshape reality into a mirror of his own hellish dimension, the elder beast Cthugrosh likes to take it easy with some delicious City Smasher! Crafted especially for Gen Con 2018, this brew is the giant Cthulian’s second-favorite beverage—the first of course being a distillation of the terror and woe of the insignificant mortals that he crushes beneath his enormous bulk or rends apart with the softest caress of his unfathomable telepathic might. 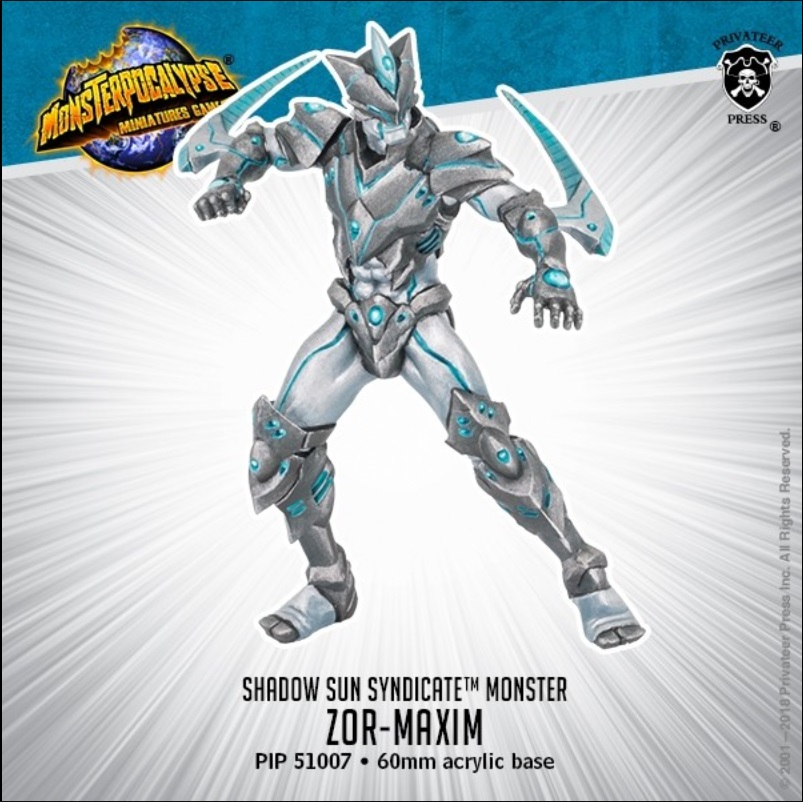 The Shadow Sun Syndicate’s biomorphic and cybernetic nanotechnology is nowhere better represented than with Zor-Maxim, one of the leaders of the zors. These highly skilled and augmented humans wear high-tech armored suits capable of morphing their wearers almost instantly into gigantic fighters employing a destructive combination of martial arts and energy weapons. Despite his augmented size, Zor-Maxim displays acrobatic finesse as he evades his enemies and closes in for the kill, then teleports away in a flash of light to pursue the next enigmatic goal of the Syndicate. 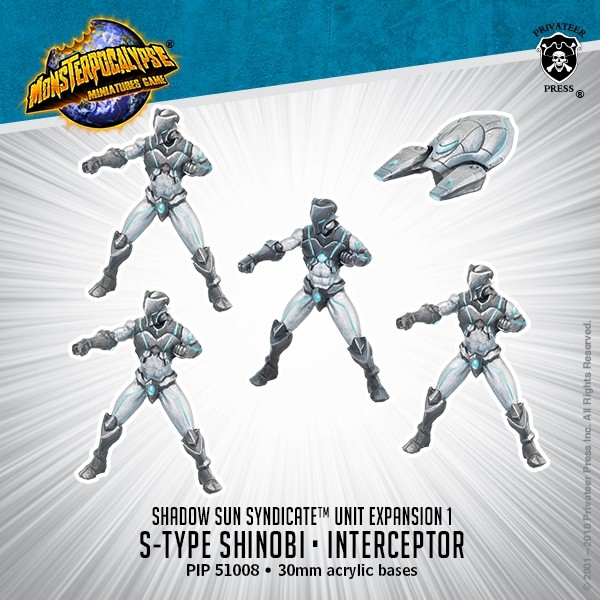 S-Type Shinobi are skilled operatives chosen for their skill at covert intrusion and mastery of ninjutsu or ninpo, aptitudes augmented by experimental technologies that include advanced cloaking systems built into their fighting suits.

Interceptors are ground vehicles that use a proprietary propulsion system to achieve great speeds regardless of any irregularities in the surfaces they cross. They possess the capacity to deliver assets like Shinobi or Shadow Gates where they are most needed but are also sufficiently armed to engage their foes directly. 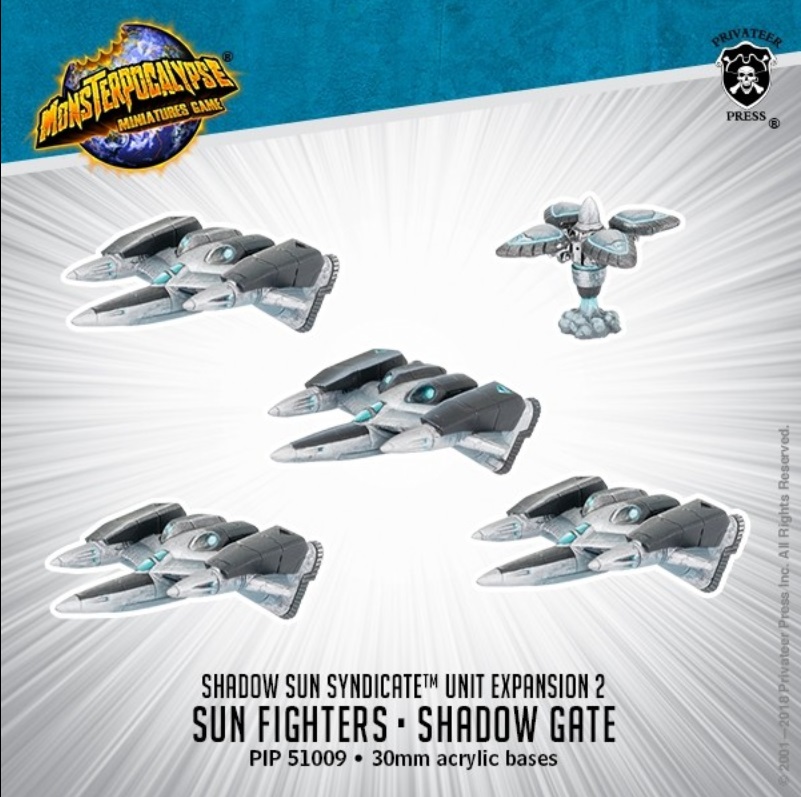 Sun fighters are highly maneuverable fighting jets dispatched by the Shadow Sun Syndicate to engage the flying forces of their enemies; they are engineered specifically for air-to-air engagement.

One of the greatest breakthroughs linked to the Shadow Sun Syndicate is their teleportation technology, hardware they have modified for the battlefield through the versatile Shadow Gate, which gives them a tactical edge by redeploying their fighting forces in a flash of light and ozone.

Which side will you take? Destroyers or Defenders?