Calculate and using the Force are two new ways to modify dice. They work like watered down Focus tokens, turning one eyeball from your roll (per Calculate/Force) into the useful icons you actually want. 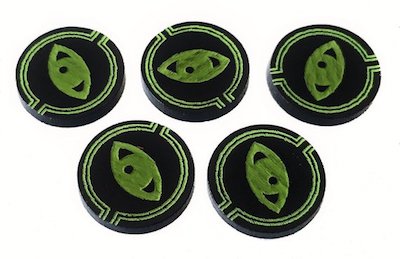 How watered down is “watered down”, though? What does that mean for our pricing model? How much should we be paying for this stuff?

First things first: the value of the token is highly variable, both in its own value and in comparison to a Focus token. What it depends upon is the number of dice you throw: the more dice, the more valuable the token compared to nothing, but the less valuable compared to your generic Focus token.

Say you’re a three-attack ship. With naked dice, you throw three dice; each die has a 50/50 chance of coming up as a hit or crit; you average 1.5 hits per shot. With a focus token, you now have a 3/4s chance of hitting with each die; that puts you up to 2.25 hits per shot. That’s a big difference! It’s like adding another die-and-a-half to your roll.

Now, how does this relate to Calculate? Calculate only turns one of your eyeballs, rather than all of them. That makes it substantially less powerful than a Focus token—but still much better than nothing: you’ll get all the way up to 2.08 hits per shot.

What about on defense? This is a super-interesting question because of Leebo and Luke, both of whom have the ability to consistently turn one eyeball and both of whom boast 2 evade dice. Unmodified, they’re getting 6/8s of an evade on average; with a focus token, 10/8s evades. With their abilities active, in contrast: 19/16, very nearly as good as fully focused. (Only one out of 16 times do you roll double eyeballs.)

Aside: believe it or not, 19/16 evades per defense is actually a lower average than Norra Wexley gets while her ability is active—that is, as long as she can stay close to at least one enemy. Did we mention that Norra can equip an Ion Cannon Turret? And Veteran Turret Gunner? I feel like we should mention these things.

Anyway, this knowledge also helps us address a different question. I’ve heard the question asked, “When should I use Vader’s Force to get a Focus for defense, and when should I save the token, hope it doesn’t matter, and spend it directly if I have to?” 5 out of 32 times, you’ll end up with two or more eyeball results. That’s not a ton of times, about as often as rolling a ‘1’ on a D6, but much more frequent than Luke was seeing on two dice. If you’re comfortable dancing with those odds, keep the Force token, spend it directly if you have to, and hope. 27 out of 64 defense rolls you won’t get any eyeball results anyway, and you’ll get to bank that Force for later.

What you choose will depend upon the game state. What’s your appetite for taking damage? How strong an attack are you trying to dodge? How much will you need that extra point of Force next turn? On the other hand, if you’ll be rolling four dice, just take the Focus. /end aside 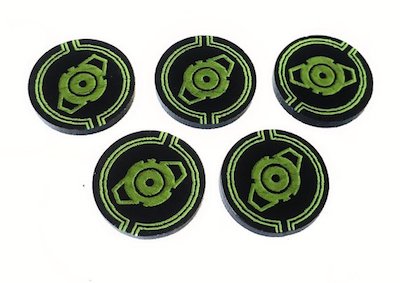 Conclusion one: A Calculate/Force token is much closer to a full Focus than nothing. It is strong. However, it is noticeably less-good than a Focus—and the gap widens the more dice you throw.

This manifests itself in strange ways. Here’s one: you know how, when attacking with a target lock and a focus, you’ll keep all your eyeballs and only reroll your blanks? That way the eyeballs you already have are certain to become hits, and your focus also hits any eyeballs turned up by your rerolls. With Calculate or Force, the advice changes:

If you have three or more non-hits, reroll them all, even the eyeballs.

It’s counterintuitive but I promise it’s the right call. If you Calculate the one eyeball to a hit and reroll two dice (with an average of .5 hits per roll) you’ll come out with 2 hits. Reroll all three, and you’ll average 2.08 hits. This is because even though you’re losing the eyeball you already rolled, you’re getting back the chance of rolling at least one eyeball on three dice *and* the chance the re-rolled die will naturally hit. Yes, you will on occasion blank out on the reroll (one out of 64 times), and giving up that hit will feel bad. More often, though, your on-average performance will be better even when you can’t tell.

The ships that can Calculate, by and large, aren’t paying much of a penalty for not being able to Focus. Guri can get focus tokens anyway, and she spends most of her actions repositioning. 4-LOM has lots of other actions to do and a focus is near-useless on defense for him anyway. The IGs get double Calculate tokens, which is actually *stronger* than a single Focus token overall. The worst case for Calculate is you roll triple eyeballs and can only turn two; this occurs once in every 64 rolls (or 1.6%). The best case scenario is you roll one eyeball on one roll and at least one on a different roll. In those turns where you’re rolling dice twice, Calculate’s best case scenario comes up 31% of the time. The IGs turn a weakness into a strength. 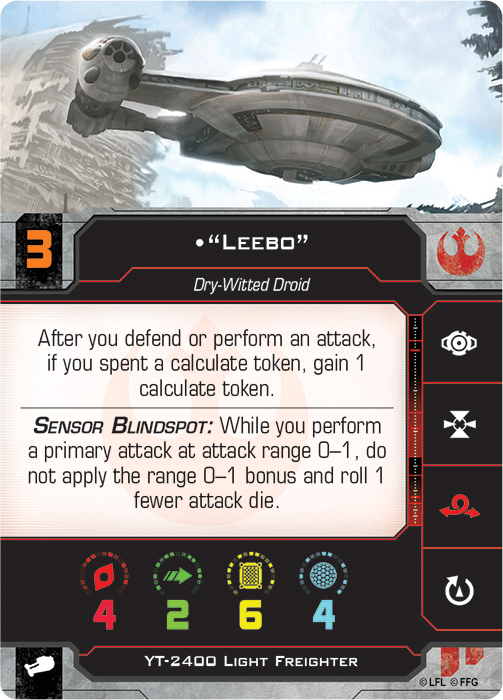 Leebo is an interesting case. When Leebo shoots, about a quarter of the time he’ll roll multiple eyeballs and only be able to turn one, so this is a noticeable hit to his offense. On the other hand, the impact on defense is much smaller, and his ability to recycle that token makes him considerably tougher. For him, dropping from Focus to Calculate is really more of an offense-for-defense trade.

In short, judging what premium these ships should pay or get for the weaker action is hard to judge. Force-capability, on the other hand, is a straight add-on, pure bonus. That means we can use all of this logic to judge the cost of adding Force, compare it to other ways of getting actions, and get a sense for how much things “should” cost.

Sometimes, this is really hard, because there are lots of competing variables. Attempting to compare, say, Darth Vader (pilot) to Maarek Steele invokes all sorts of convolutions: Vader isn’t just a Force user, he has three Force points; Vader gets the Ini6 premium; the Ini6 premium is particularly valuable when combined with getting to take Supernatural Reflexes, and it trivializes getting a target lock to maximize his ship ability. Moreover, treating Force points like discount actions doesn’t work for the Dark Lord, for whom those Force points are full actions. Darth Vader’s a boss, and he’s priced like a boss.

We have a better chance of assessing these things when we examine crew options. We need a baseline to start, though. For that, we have Perceptive Copilot. Perceptive Copilot’s extra focus token is the equivalent to an extra action, so long as you take a specific action to trigger it. That restriction means that PC is worth slightly less than a full extra action. Hey, that sounds just like a Force token! 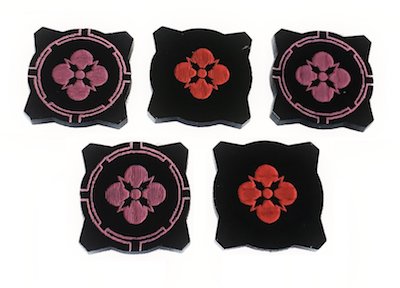 Conclusion two: adding a Force upgrade to a ship costs about 10 points to start.

(Aside: this discussion illuminates just what a steal Han Solo (gunner) (Scum) really is. Sure, he stresses you—but a full extra action, that can be taken without regard to blocks or rocks, and triggers when you have complete knowledge of the board state so you know if you need it or not? For how many points? Put this guy in every friggin’ list.)

This math checks out with the pricing we see. The cheapest Force upgrade around is Fifth Brother (tied with Seventh Sister), at 12 points. He adds a bit of crit-forcing if you spend your Force on offense. Given this extra utility (compare to the 1 point to take Marksmanship), this price seems eminently reasonable. With this baseline established, we may judge the worth of various Force users’ premium costs by seeing how much they add *above* the base 10 points.

To be clear: upgrades are contextual, and “appropriately priced” doesn’t equal “auto-include”. You’re not going to go around throwing Force users on your Scimitar Pilot TIE Bombers just because they’re consistently costed. Quite the contrary: the overhead for an extra action in this edition is much higher than it was in the previous one. This provides us a useful corollary:

Conclusion three: if you can get an extra action for fewer than 10 points, you’ve probably found something good. 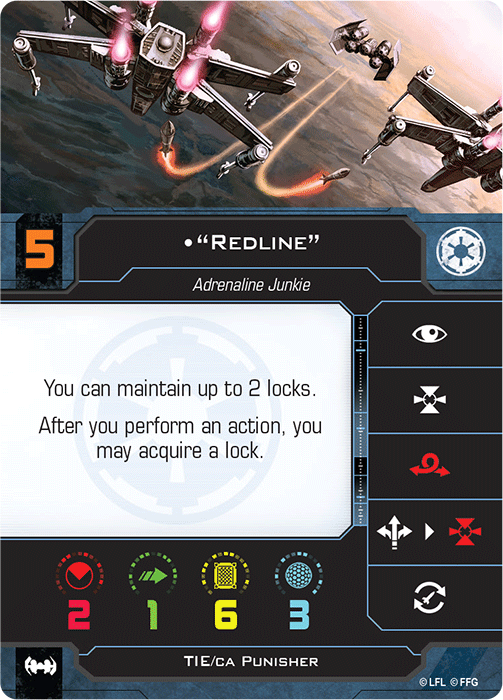 Example: Redline. Compared to a base Punisher, he’s eight points more… except that for his pilot ability he gets the privilege of freely getting his most powerful and useful action. (It’s not even an action, making the ability even stronger, but we can treat it as one for these purposes.) Given his high initiative, the high mobility of medium-base ships with boost and barrel roll, and the potency of Proton Torpedoes, this suggests Redline is underpriced for what he brings to a list… and the splash he has made at Coruscant and elsewhere reinforces this notion. Other examples (like Palob, who pays a six point premium and can affect two-action swings) correlate to ships we’ve seen do well.