Step back in time with us as we brave one of the top dungeons of all times. Full of traps, character, and dust that might make you sleep until you’re 5,000 years into the future, the Hidden Shrine of Tamoachan is a piece of D&D history.

The Hidden Shrine of Tamoachan is an old school module that does a whole bunch of work in just a few pages. It sets up an ancient society, populates a dungeon with monsters that are all centered around it, and gives compelling character to not only the civilization that built it, but to the creatures within it. If you want a location that tells a story, the Hidden Shrine of Tamoachan is a great example of that kind of storytelling.

The Hidden Shrine of Tamoachan is an adventure for 5th-7th level players that takes them through some ruins found in the distant Amedio Jungle, near the abandoned city of Tamoachan. The adventure originally began with players escaping pursuit and becoming lost in the jungle and then falling into the ruins, swallowed by darkness. From their rough landing, players are given a simple objective: escape the buried shrine and make their way to the safety of the surface.

However in order to do that, they’ll have to make their way through a trap-filled temple filled with fiendish foes, including two forgotten Demigods, a giant crab and more. Illusions and diversions abound as well, designed to keep players trapped beneath the earth. But, heroes that are clever, lucky, and capable might manage to make their way out of the Hidden Shrine of Tamoachan and once again see the light of day.

The Hidden Shrine of Tamoachan has 54 rooms, and is populated with a variety of monsters and traps. There are more traps and puzzles than combat encounters in this module–if you have players who prefer solving puzzles to slinging swords, this module will suit them nicely. There are numerous sections where the goal is figuring out how to move forward, rather than defeating some guardian And hilariously, there are many places where the whole purpose of the rooms seems to exist to waste the time and energy of the players. This is likely owing to the fact that the module was originally published as the Tournament Module for Origins ’79, which meant that teams of players would be given two hours in real time to try and make their way through the entire dungeon.

There was even a scoring system. 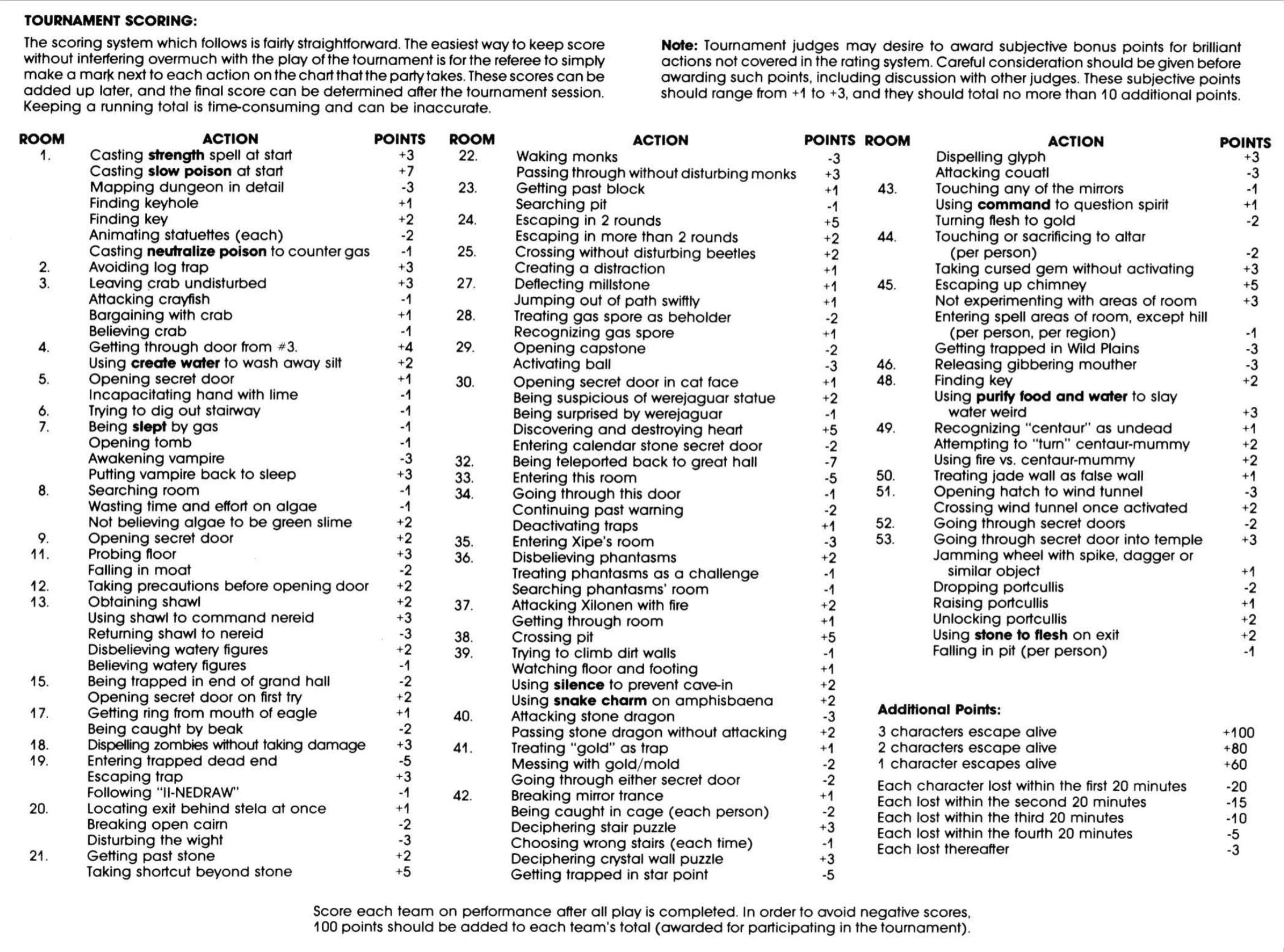 The number of points awarded for bringing a snack to the GM is discretionary.

It’s an interesting relic of a different time. You can kind of get an idea of the adventure’s intent from the way points were awarded. Cleverness and solving the puzzles were awarded, but there were so many gotcha moments included in the game that it was entirely reasonable to take some hits for acting like a normal person with common sense. For instance, players aren’t really rewarded for finding loot–rather they’re rewarded for making what the designers felt the “correct” decisions were. Or as the module puts it:

“Originally designed for tournament play, The Hidden Shrine of Tamoachan is a test of the skill and common sense of players. Therefore, many of the encounters will not bother a party who do or do not take certain actions. Those of a party who act foolishly, though, will pay the consequences for their deeds.”

The “common sense” in question here is really more like suspicion bordering on paranoia and suspecting that everything could be a concealed trap (heaven forbid you actually trigger one) or that every creature you encounter is lying to you. And people wonder why Adventurers are thought of as Murder Hobos. Take a look at room 34, for instance: 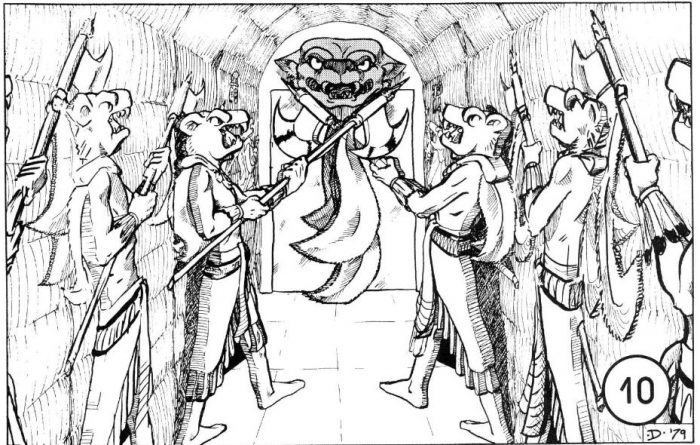 Did you spot the hidden trap there? Well. If you were thinking those warrior statues. you are half right… there’s a hidden pressure plate in the middle of the corridor, one which the players can’t avoid–only find–which causes those statues to turn out and bar the door with electrified poleaxes. Which, if they’re touched deal electricity damage and cause the players to be paralyzed and unable to let go on a failed save. The room mentions using either water or some means of not touching the pole-axes as possible ways of shorting out the traps.

Now you might be thinking, oh hey, this room is guarded by a pretty serious trap–it must be to protect something, right? Nope. In fact you lose points for even walking inside–and there you’ll face a trap of liquid light (which obviously will start to engulf and suffocate you if you touch it) as well as an Ogre Mage who, in fairness, has some okay loot, but that’s not the point of the module. The whole goal is to explore and discover the character of the shrine.

Adventuring in the Shrine 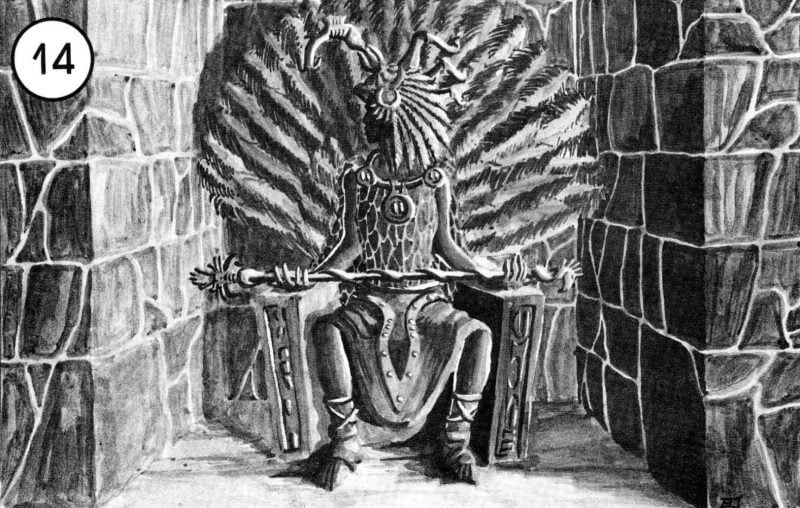 The Hidden Shrine of Tamoachan was the first module to introduce the Olman to the world of Greyhawk. The Olman are a Mesoamerican analogue society drawing heavily from the Aztecs but also there’s some Mayan and Incan iconography sprinkled throughout. Many of the rooms are decorated with figures and statues and murals that depict scenes from the culture.

Adventurers who explore might be rewarded with intricate details about the Olman society’s creation myths, or find the remains of a team that played pelota–which means ball, and is this module’s answer to the whole, “oh hey these guys lost a ball game and are dead.” Naturally players are given a chance to play (risking themselves in the process). Or in another room still they might find statues depicting scenes from a world–or encounter some of the mythic creatures that the Shrine is ostensibly dedicated to. 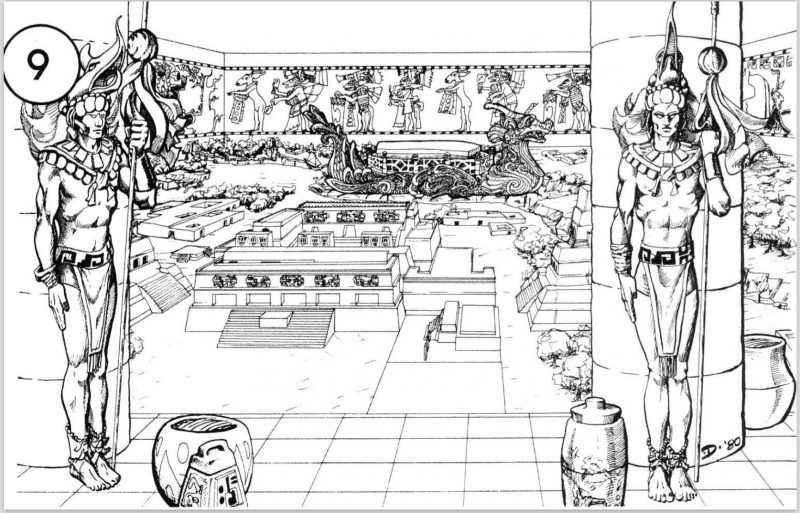 Beings like a mummified centaur who was once a sacred offspring of Chiza-Aztlan, but now is an undead guardian tasked with preventing any but the dead from entering the ruins of the temple, and to try and keep the dead contained therein from escaping. This is some really cool backstory–and details like this are sprinkled throughout the dungeon.

Adventurers can walk into a room that is a diorama of Mictlan, the land of the dead, chock full of with magical effects nearly every step of the way–including burning sands and the like. Or walk through the chapel of Kukulkan where they encounter a hidden Couatl that charges them with a riddle and has them pass a trial that rewards successful characters with magic items and the services of a shadowy Death Servant, which sounds creepy, but is basically an extra life. Once, and once only, when that character would suffer a fatal blow, the death servant (which has unbeknownst to the characters merged with their shadows) will materialize and push the character out of harm’s way. 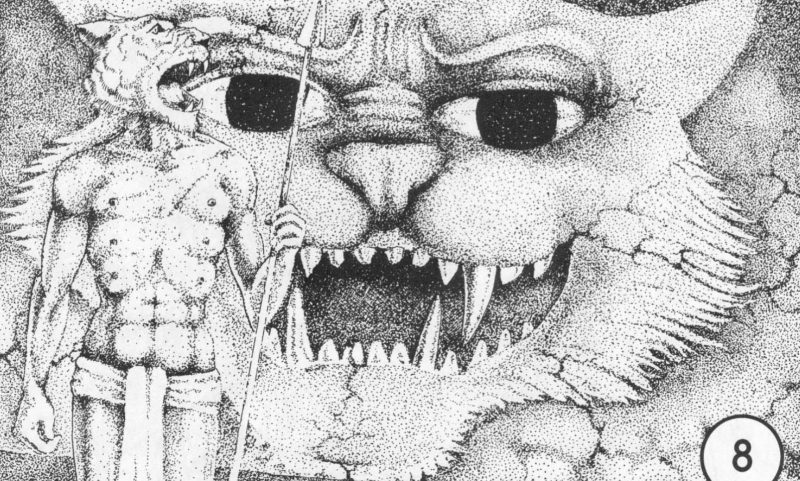 It’s a dungeon that reveals its story as you explore it.

This module is fantastic. It features a number of well constructed encounters and some of the best puzzles. It rewards cleverness rather well. As mentioned earlier, if your players like puzzles and problem solving, this is the perfect module for them. You can’t really fault a module that presents a riddle that requires something of each member of a (pregenerated) party.

Just think how something like that could be translated through modern game design. Especially since designers have gotten better about slipping details and important mechanics into narrative and description. I think this one is a great candidate for keeping players engaged throughout. 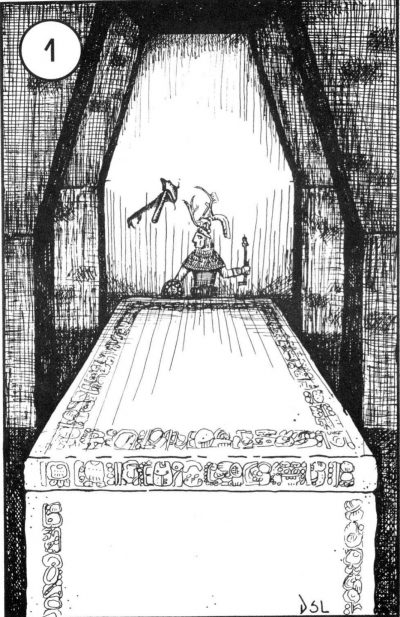 There’s a reason this dungeon shows up on many people’s top ten modules of all time. If you haven’t run it, you can find a 5th Edition version in Tales from the Yawning Portal or find the original online through the DM’s Guild.