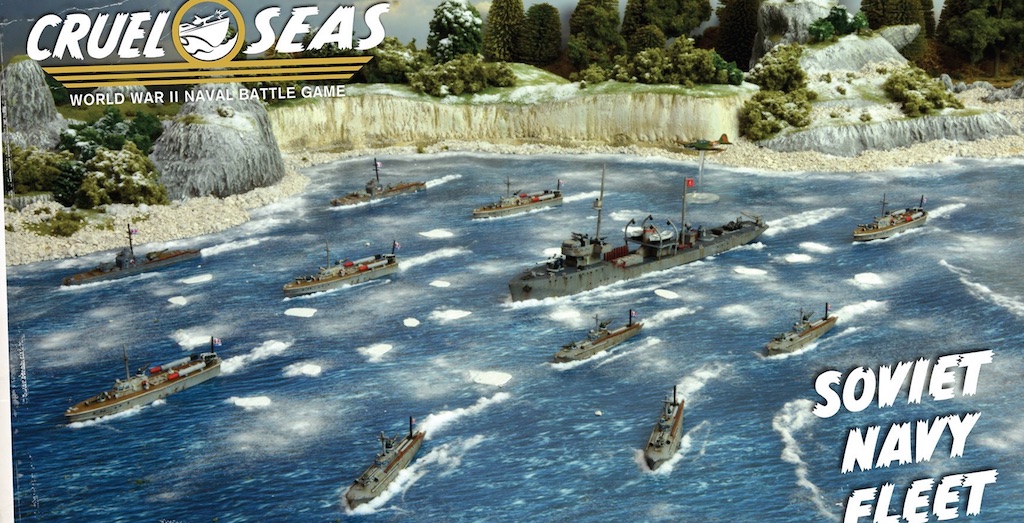 Cruel Seas continues to grow, announcing the Italians and Soviets will be coming to their roster in January, 2019. Come take a look at the Soviet and Italian starter boxes, now up for pre-order!

The Cruel Seas starter boxes are some amazing value. Each one is a sizable army that is enough to get playing in games of Cruel Seas–they’re not just a small core force–you can see the Soviet Navy box comes with 12 different models. The Italians have only 8 by comparison. These boxes are massive, so let’s just dive right on in. 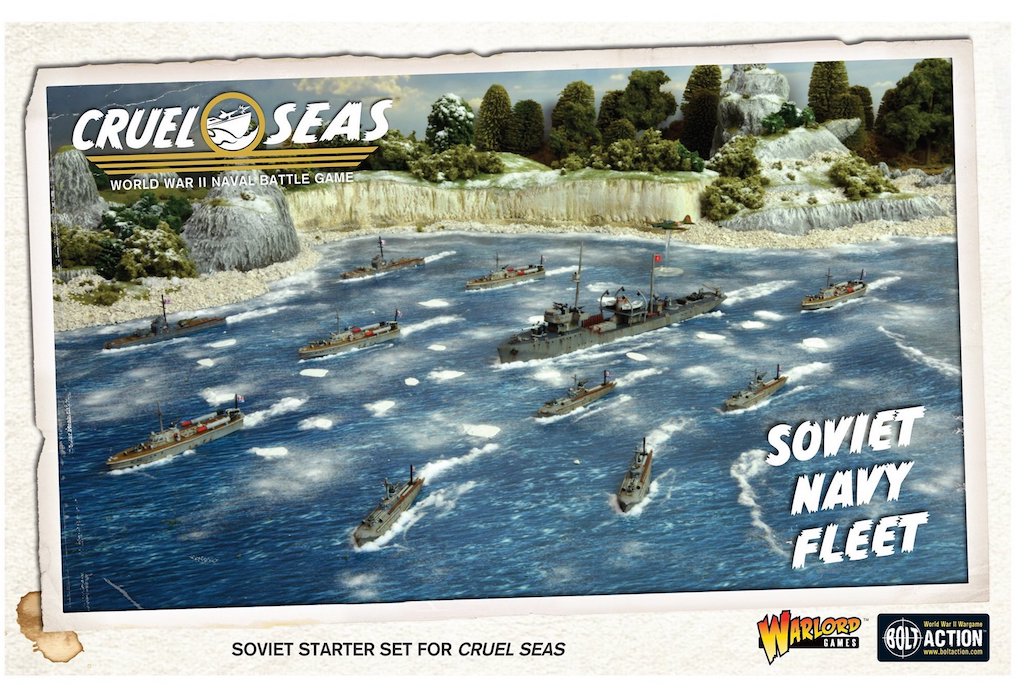 Voyenno-morskoy flot SSSR (VMF) – i.e. The Military Maritime Fleet of the USSR, or the ‘Red Fleet’ for short.

The Russian Armed forces of WWII are an interesting blend of extraordinary innovation and technical achievement, and extraordinary inexperience and foolish management of its huge forces.

A common class, over 350 being put into service, was the MO small guard ship. It stood for Maly Okhotnik, or “small hunter” and gained the nickname Moshkaor “fly”. These useful vessels were primarily built for anti-submarine work, but soon extra roles were found for them: minelaying and sweeping, convoy, patrol and even supporting ground operations.

Captured craft and lend-lease British and American MTBs were used in their light flotillas. Their home-grown efforts, however, produced the peculiar looking G-5 light torpedo boats.

The G-5s main strike weapon was two torpedoes, stern launched, which was rare in WWII. They were dropped tail first into the water, so a sharp turn was necessary on launch to get out of the way. Unlike most other nations, the boats carried no cannon but were armed with one 12.7mm machine gun and normally two 7.62mm MMGs.

The Soviet Navy then is not a glamorous fleet for the gamer. Rather it’s a solid, unsophisticated affair, with no radar, little radio, few automatic cannons or other refinements. As ever with Russian forces, quantity has a quality all its own. Your best tactic is to get in quick, torpedo your target and escape fast as you are likely to take much damage from concentrated cannon fire. Use the MO boats to support you, use minefields to hide in, and if desperate, use the threat of your terrifying if inaccurate Katyusha rocket! URRAH! 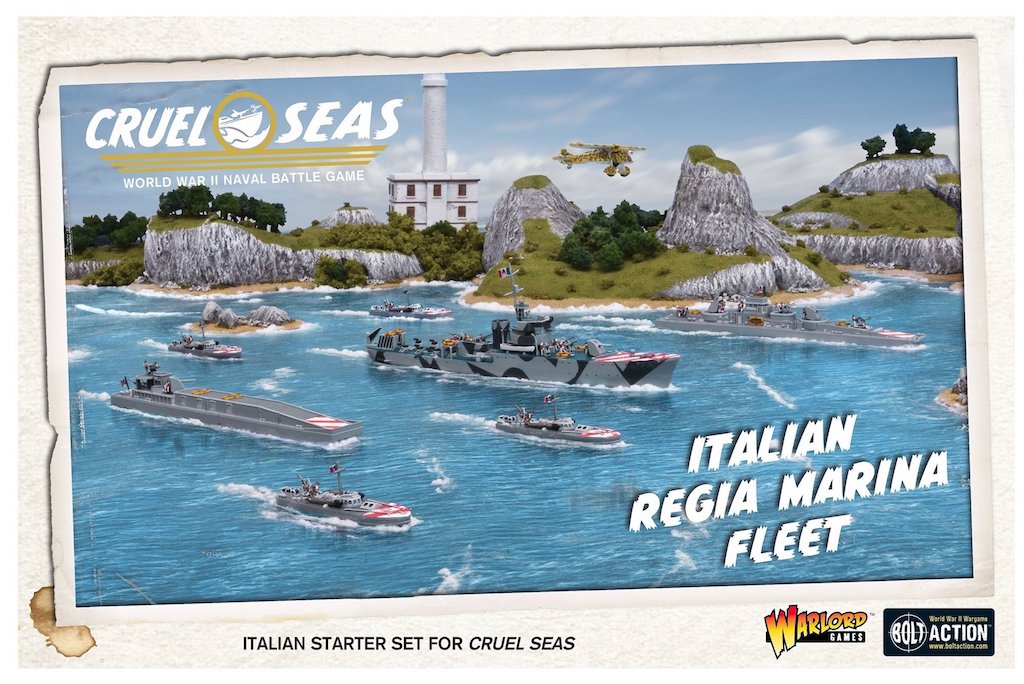 The Regia Marina was confident, had indisputably the most handsome ships in the world and referred to the troubled waters of the Mediterranean as Mare nostrum(our sea). By the start of the war, as well as capital ships, it fielded 59 destroyers and 67 torpedo boats, a fast class of small destroyers.

In May 1942, at Germany’s request, the Regia Marina deployed four 24 tonnes Motoscafo Anti Sommergibile, or MAS boats, six CB midget submarines, five torpedo boats and five explosive boats to the Black Sea, and appear to have done well against merchantmen, barges and even a cruiser.

One exotic posting for the Italian light fleet was an expedition to Lake Lagoda and the Leningrad Siege. Four MAS boats, naval detachment K, teamed up with German and Finnish forces to blockade Russian forces. MAS boats 526, 527, 528, & 529 took part with minelayers, Siebel ferries and Finnish patrol boats, the whole force titled Einsatzstab Fahre Ost, a fascinating flotilla to collect and game with!

The Italians favoured their fast small boats, typically the MAS boats ( Motoscafo Anti Sommergibile) weighing in at between 20 and 30 tons, smaller than most other nations small craft. They were, however, good boats and gave the Allies a tough time. They had a ten-man crew; their principal armament was two torpedoes and a 20 mm Breda A/A on the rear deck. They were fast, very fast and could make up to 45 knots, outrunning all PT boats and British MTBs. By 1940 48 of the MAS 500 class were available.

Another excellent maid of all work for the Italian fleet was the Gabbiano-class Corvette. At 660 tons they carried a 100 mm main gun forward, three 20 mm A/A and four 20 mm in dual mounts. They were also equipped with two torpedo tubes. These were excellent ships, well-built and pleasing to the eye, not fast (18 knots at best) but with good tactical options for a good commander.

An Italian coastal force is an attractive force to collect. The MAS boat, your main strike force, must use its speed and small size to survive, but although lightly armed and fragile, they are inexpensive boats to add to your fleet. Overwhelm them with numbers and manoeuvring, then hit hard with your torpedoes.

Get ready to ply the cruel seas!