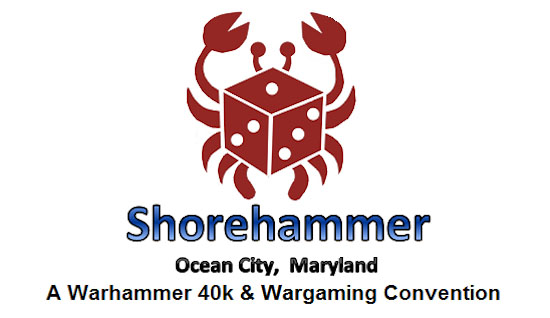 Pimpcron just held his Warhammer & Wargaming convention. What happened there?

Hey people! It is I, Pim P. Cron here, to tell you how last weekend’s Shorehammer went! This may come as a shock to many of you, but I wanted to warn you ahead of time. I have been known to exaggerate from time to time, and may be adding non-truths as flavor enhancers. Like salt, but not salt about someone being a better player or salt about my codex sucking. Now let’s play Find Pimpcron’s Lies: The Home Game.

This our third year, and everything went off without a hitch. As always, my lovely volunteers were a great help. Steve donated the use of probably the world’s largest private terrain collection. We held several terrain painting parties prior to the event and I enjoyed the help of Tim, Matt, TJ, James, and Steve. Being the third time through, I knew how everything would go and I know how tot tackle the literal mountain of preparation for the event. From securing sponsors to printing out tournament score slips, you’re talking hundreds if not thousands of hours of preparation over the course of the year.

Narrative Battle in a Space Hulk

Sabol Army Transport jumped on a sponsor this year and everybody was excited to win an Army Transport full of foam! Sabol has been so nice to us, and their sponsorship was kicked off this Spring when I ordered a new transport. I started talking to the owner who was more than accommodating when we ran into a minor issue with delivery. I just had to tell him that nearly every one of my 16 armies was living in a Sabol case. They are my favorite transport brand and I had to gush a bit.

Not Everything Went Smoothly

As soon as we got there to set up the day before the event, the ice sculpture had already been delivered! It was sweating profusely and so were we! It had arrived a day early, and we had no where to put it! Luckily the restaurant downstairs allowed us to put the life-size statue of Pimpcron in their freezer for a day. I was sad to see that the center finger of one hand that was lonely and defiantly sticking up had broken off in transit. Ugh! That really hurt the swag of my statue.

Fear This Kustoms! was a sponsor again this year with their laser-cut combat gauges, turn counters, and objective markers. I was *a bit* late in contacting them about prize support and I was impressed at how soon my packages arrived! Just in time for the convention, and the owner said he had to pull some strings to get my order in so fast. As always, they are a great company and their products were chosen first by attendees.

We had the unfortunate trouble of a huge tabletop convention being scheduled on our weekend and within the range of our attendees. Luckily we still had a great turnout, but I’d be lying if I said that this huge convention didn’t put a cramp in our style. We are changing weekends for next year to avoid this.

One of my volunteers was in a serious car accident the day of setup and missed the entire weekend due to it. He is a bit banged up and his car is totaled, but he is fine otherwise. It was sad not to have him with us, and his situation sucks. He is always a great help and he was missed for his volunteer help as well as companionship. We missed you Brian!

Two of my go-go dancers didn’t show up on the second day of the convention, leaving me with two empty dancing spaces. Luckily my brother Brooks and friend James were more than willing to jump in and shake their money makers. Despite the dancer’s outfits being about 3 sizes too small.

We Made a Guy Mad

Our convention is unique because it is casual and not hardcore in the least. Everyone is friendly and calls each other by name, and there is a flurry of new Facebook Friend requests after each Shorehammer. I had one man come up to me during the con fuming. He explained that he didn’t want friends and enjoyed his dark and lonely life but had apparently accidentally made new friends at this event.

The man said he was 52 years old and didn’t aim to make new friends. He accused me of tricking him because I had not previously warned him that everyone so awesome here. For legal reasons, I have agreed to put up a very clear warning for future years so that people know that out attendees are the best and they will make new friends. Luckily, I talked him down from any legal action against us and convinced him that he would not be required to send these great new people Christmas cards each year.

We Made Another Guy Mad

Gamemat.eu  was our major sponsor this year and they are another company that it would be too embarrassing to disclose how much I have bought from them. Their owner is a great guy and they are always a pleasure to work with. When the drawing came at the end of the awards ceremony to win a sweet doubled-sided mat donated by Gamemat.eu, I drew a badge number.

That person wasn’t there and figured he wouldn’t win anything so he went home before the ceremony. I moved on and drew another number, who was in attendance for the awards show and he went home happy with a new gaming mat! But guy number one was notified by his friend that he missed out on the mat. He wasn’t mad with us, just mad with himself.

energy in the chilly November water prior to tournaments.

Terrains4games.com was so nice to donate several of the MDF terrain kits to give away at the event. They are another company I frequently buy from. Seeing a trend yet? If I like a company, I will seek them out because I find conventions that will take just anybody to be disingenuous and untrustworthy. Terrains4games.com has a huge selection of pre-painted stuff too, which is why I frequent them. I know a lot of you like painting terrain, but I am not one of those people.

It was so nice to have another successful year with some new faces and some familiar faces. We are building a strong friendly community and it is awesome! Thanks to everybody who attended, I’ll see you next year!