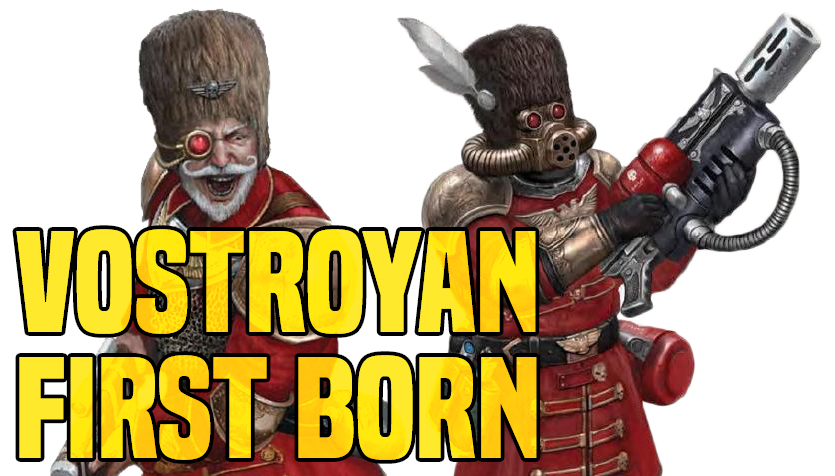 Today loremasters we look at the Vostroyan Firstborn – one of the pride of the Astra Militarum. 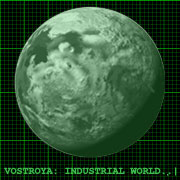 Vostroya swore allegiance to Mars during the Age of Strife. It is ruled by the Techtriarchy, a council of Adeptus Mechanicus members and more traditional planetary government personnel/representatives. Since the Great Crusade, Vostroya has acted as an industrial world, supplying arms and ammunition to the armies of the Imperium. In the ten thousand years after the crusade, the Vostroyans have continued the same task, living and dying on the production lines and complying with the endless schedule of manufacturing and assembly. During the Horus Heresy, Vostroya refused to provide regiments to the Emperor, preferring instead to reserve the population in the manufactoria blanketing the world. After the Heresy came to an end the Vostroyans agreed to supply every first born son to serve in the Imperial Guard regiments. Vostroya technically is neither a hive world nor a forge world. Instead, it falls somewhere in between (labelled an Industrial World). The birth and death rates of 9.3 billion inhabitants are very high, keeping the population figures fairly stable (taking into account that first-born sons are extremely numerous, providing a massive amount of soldiers for the founding and reinforcement of Imperial Guardregiments.)

Vostroya has suffered many conflicts, including at least eighteen “Great Wars”.

The landscape is extremely bleak – highly polluted. Life outside ‘managed’ zones is almost impossible. Animal and plant life is almost non-existent. Most food is imported.

There are seven large and distinct administrative zones/regions stretching around the planet’s more temperate equatorial belt (e.g. The Magdan, Sohlsvodd, Muskha, etc). The far colder north and south are uninhabitable. Vostroya has one moon – Turtolsky. 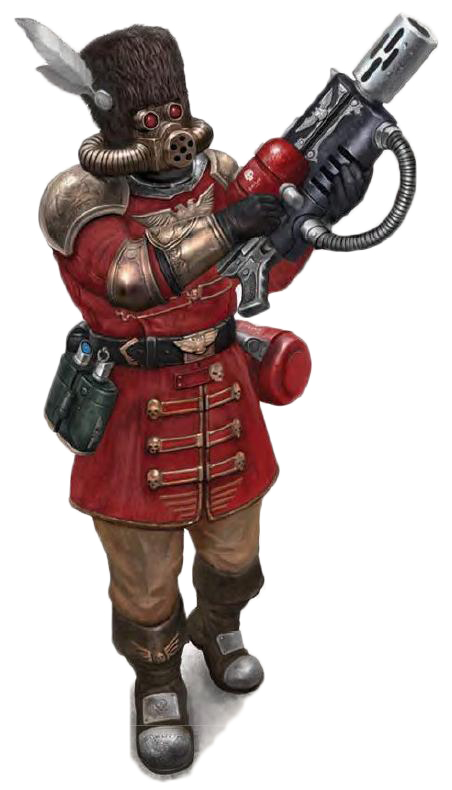 The Vostroyan Firstborn are Imperial Guard Regiments. Vostroya is a world in the Halo Zone beyond the Eye of Terror, which swore allegiance to Mars during the Age of Strife. It is now ruled by a committee of Techtriarchs, a mix of Mechanicus Magi and more traditional Imperial planetary government. During the Horus Heresy, Vostroya refused to provide regiments to the Emperor, preferring instead to reserve the population in the manufactoria blanketing the world. After the Heresy, the Vostroyans, out of guilt, agreed to supply every family’s firstborn son to service with the Imperial Guard.

According to Vostroya’s Offering of the First Born, the eldest son of every family must enlist in the Regiments. There are no exceptions to this law, which applies even to the Techtriarchs and the most noble families. For most Vostroyans, it is an honour to join the Firstborn, as great importance is attached to the payment of the debt owed to the Emperor millennia ago.

Unlike other Imperial Guard regiments that are raised en-masse, the Firstborn get a steady flow of new recruits from their homeworld. As a result, the Firstborn regiments have existed unbroken since they were first created. This is not always easy to organize, but ensures that Vostroyan regiments maintain their highest potential, as well as ensuring there is a core of veteran warriors. One consequence of this method is that the Firstborn are considered a brotherhood of warriors and are proud to train the recruits according to their own exacting standards. Few Imperial Guard regiments have a stronger brotherly bond than the Vostroyans. The Firstborn are trained in very difficult conditions among the ruined industrial areas of their homeworld.

Vostroyans are disdainful of Imperial Guard regiments which they consider to be less devoted than themselves. They are strictly disciplined and act as a warrior brotherhood when in the field. They specialize in urban and winter style combat.

Being away from centralized control of the Imperium, Vostroyan soldiers and officers retain a very archaic appearance compared to the rest of the Imperial Guard. Their weapons are passed down from firstborn to firstborn and are usually worth more than the guardsmen who carry them. Firstborn use long and very ornate rifles. Officers bear lasguns integrated with axes. Standard bearers bear ancient tribal sabers and daggers, and ritual scars on their upper torsos.

The Vostroyan Firstborn prefer to use Plasma Guns and Heavy Bolters. Their pattern of Lasgun, produced on Vostroya, is known for its fine hand-crafted detail.

~Knowledge is power – use it well.